The Stories Behind America’s Most Beautiful Coastlines

People are drawn to water, but we know little about how the land leading us to them was formed.

The United States is home to some fascinatingly diverse shorelines whose histories we often take for granted.

Enjoy these beautiful images from around the country and read a little about the stories – geologic and otherwise – behind these amazing beaches, cliffs, and islands. 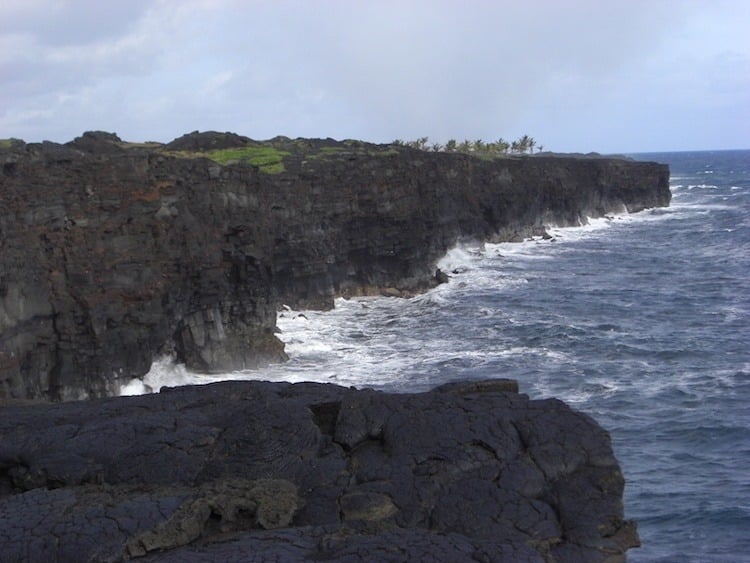 Hawaii is an archipelago made up of hundreds of related islands. These picturesque islands were created by something a bit less characteristically pretty: volcanism. Indeed, streams of magma emerging from deep within the earth are what really allow couples to enjoy their Hawaiian honeymoon. Sorry, all-inclusive resorts.

The stream of magma or “hotspot” is stationary, and the islands were consecutively formed as the Pacific Plate moved over the hotspot. The youngest (and still growing) island is the Big Island of Hawaii, where new eruptions from volcanoes like Kilauea and Mauna Loa continue to add more mass to the island. 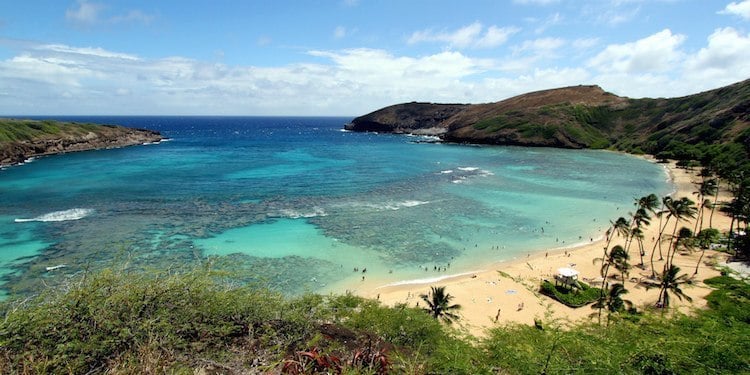 The black sand on some of Hawaii’s beaches also adds to the shore’s intrigue. Unlike the more common white sand found on beaches around the world, black sand is made not of quartz but of ground-up basalt expelled during the eruptions. Other green sand Hawaiian beaches owe their coloration to the mineral olivine, which is common in igneous rocks. 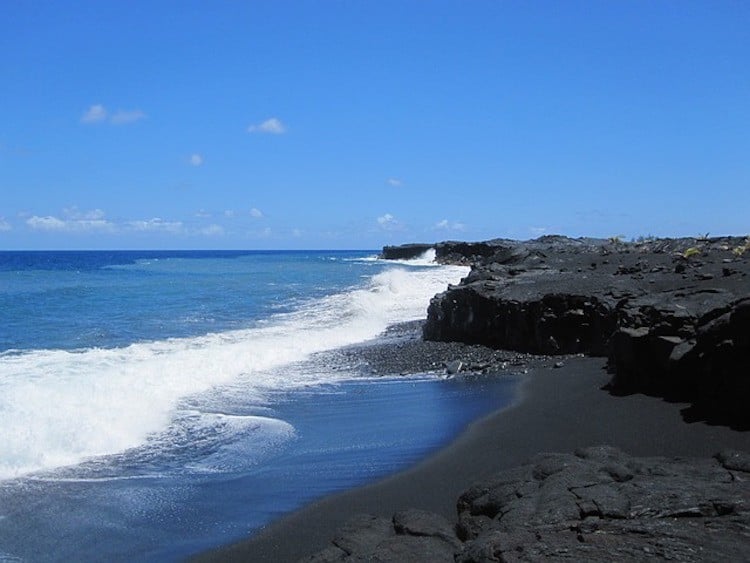 Though volcanoes can create some amazing beaches, they can also pose a hazard to beachgoers. In some spots, such as Volcanoes National Park, hardened lava can create the illusion of a safe place to stand when in reality the land is a delicate shelf that can crumble into the ocean with little warning.

These lava “benches” are formed when fresh, hot lava hits the ocean and cools rapidly, leaving an unstable layer of loose rubble below the surface. 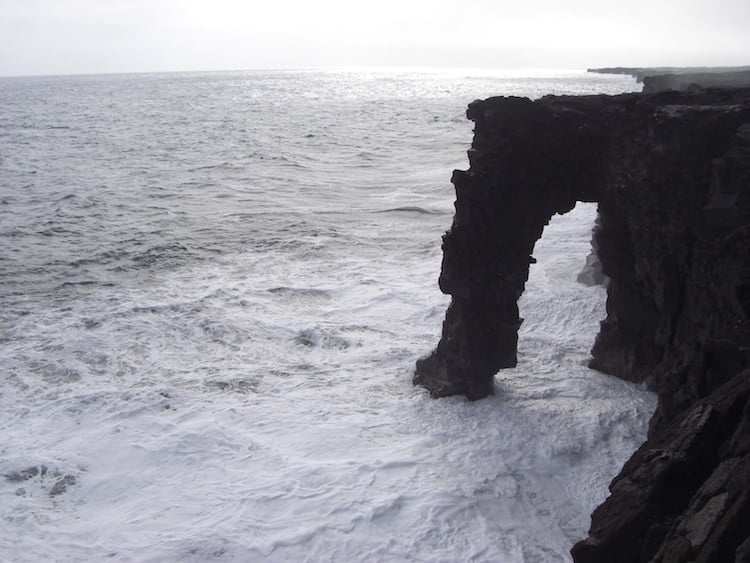 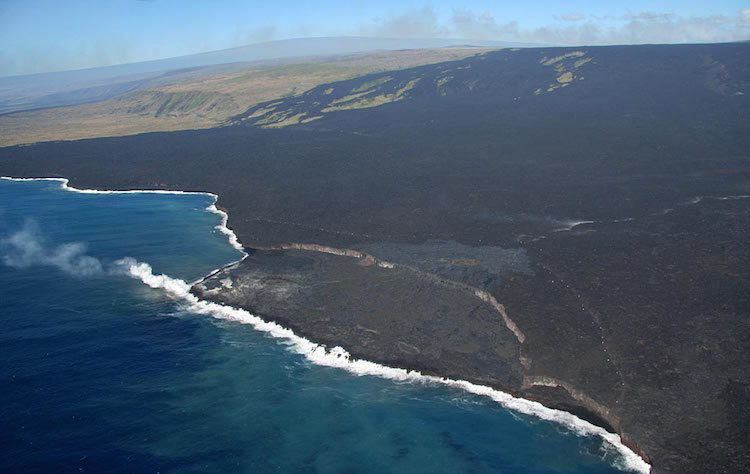 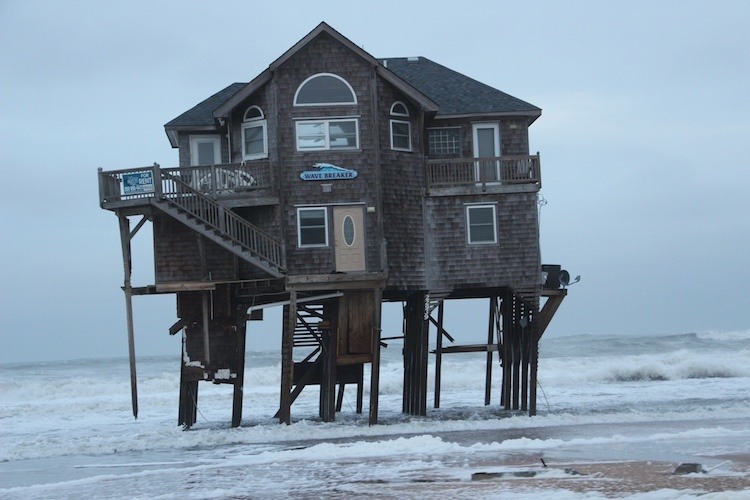 A popular American travel destination, North Carolina’s Outer Banks are a series of thin, sandy islands. Nicknamed a “ribbon of sand,” they are vulnerable to the threats of rising sea levels and hurricanes due to their low elevations.

Since they protect the mainland from the worst storm impacts, the Outer Banks are considered to be barrier islands, and they’re young – at least geologically speaking. The Outer Banks started forming about 7,000 years ago when sea level slowed down dramatically. More recently, the islands served as the location of the Wright brothers’ famous 1903 flight near Kitty Hawk.

But why are they pointy? Seen from space, it’s clear that the edge of North Carolina is scalloped, like the edge of an umbrella. Those points may be the effects of sand organizing itself in response to waves that tend to approach the shoreline from a high angle. 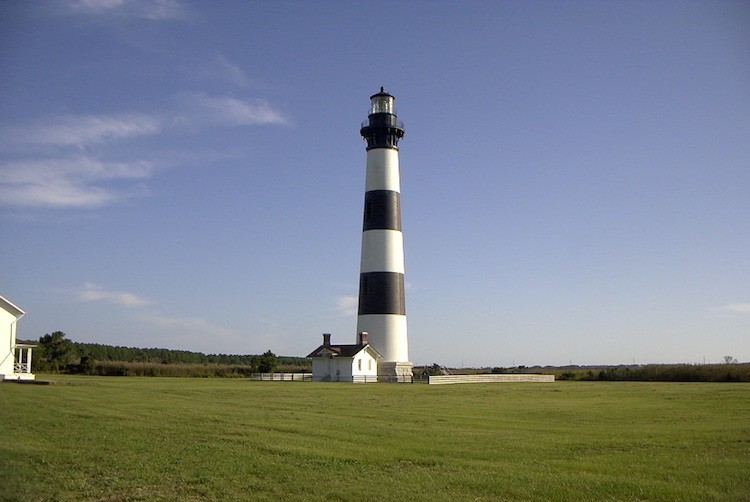 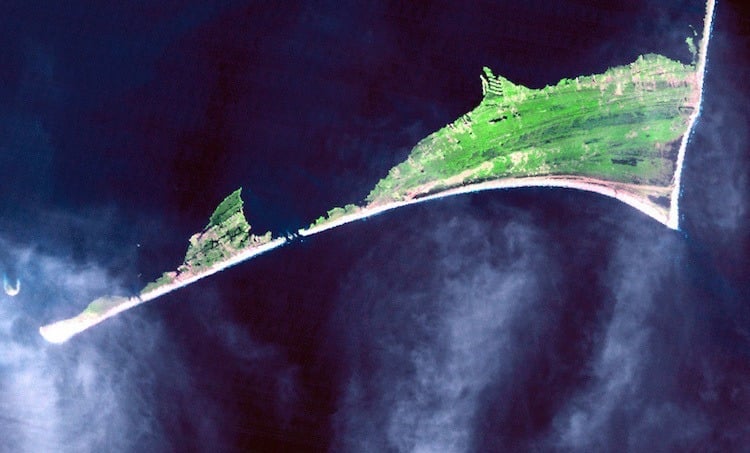 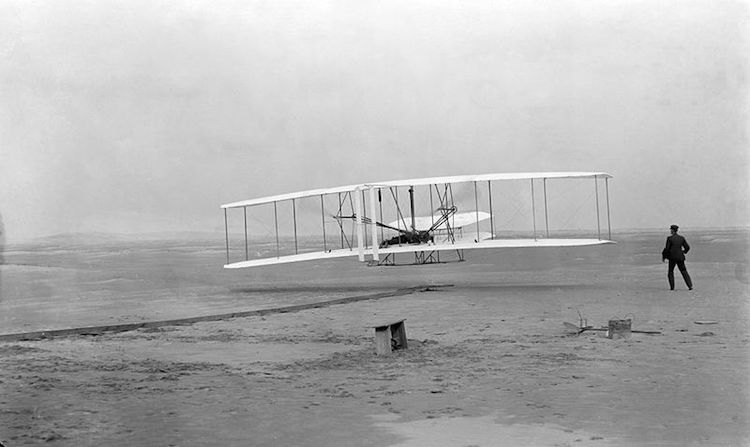 The Wright brothers made history at the Outer Banks in the early 20th century. Source: Wikimedia Comons 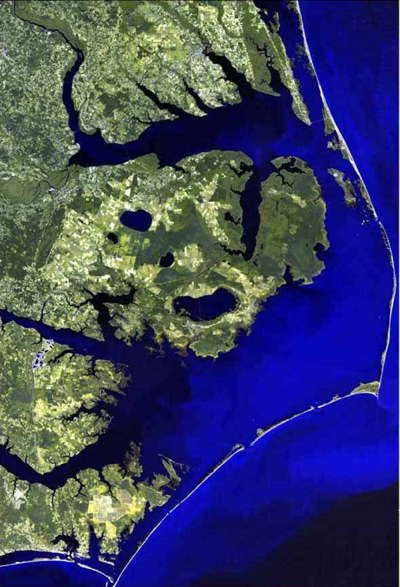 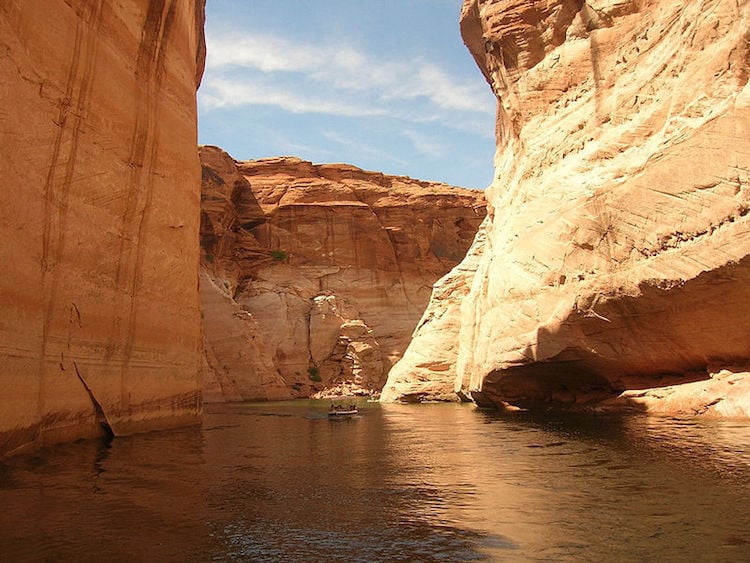 Surprised to see a lake on this list? Not all shorelines border an ocean! Lake Powell, the second-largest man-made lake in the country, earned its spot on this list because of the colorful “bathtub ring” that now encircles the lake. The largest reservoir in the county, Lake Mead, located in Arizona and Nevada boasts a similar ring.

Since its completion in 1963, the Glen Canyon Dam has blocked the Colorado River in Arizona, creating a reservoir that is used for recreation by about three million tourists every year. The sweeping sandstone cliffs and arches that surround the lake provide a beautiful backdrop for swimmers, boaters, and fishermen. But since the lake is presently at only 45% capacity, the white smear of calcium carbonate that encircles the lake is a visual reminder of drought in the West. 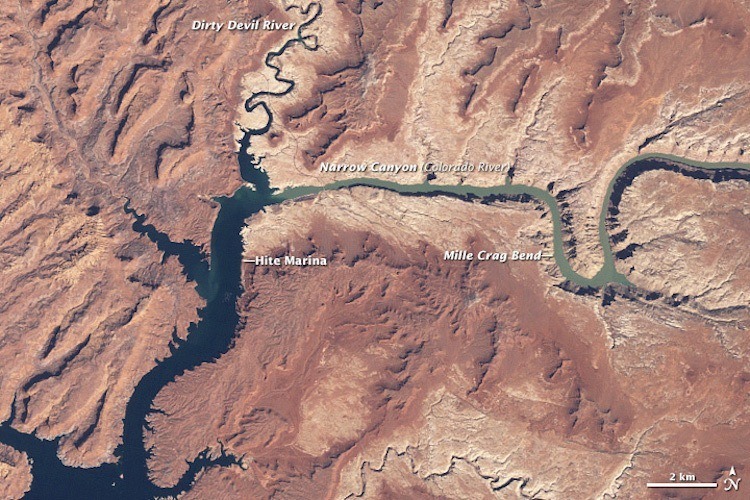 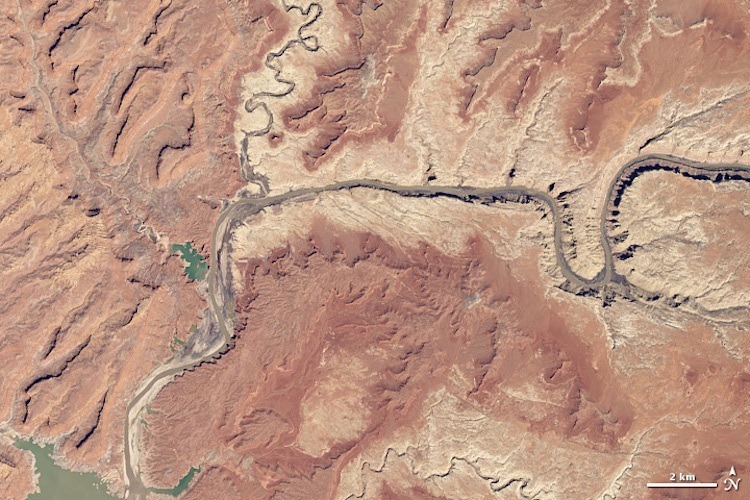 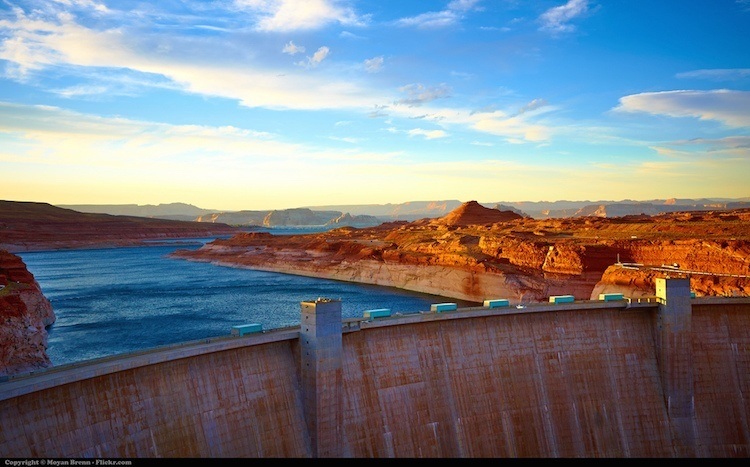 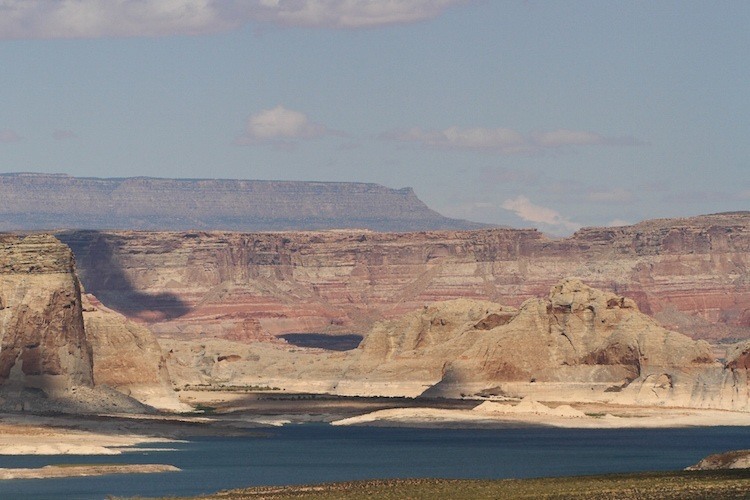 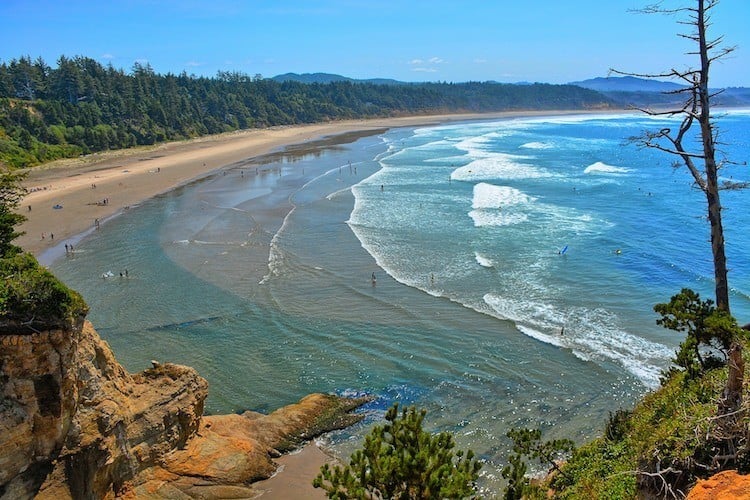 Though there are many features called Haystack Rock – including two others on the Oregon coast – the most famous of them all is near Cannon Beach. You can find it in several movies, including The Goonies, as well as my personal favorite Arnold Schwarzenegger flick, Kindergarten Cop. 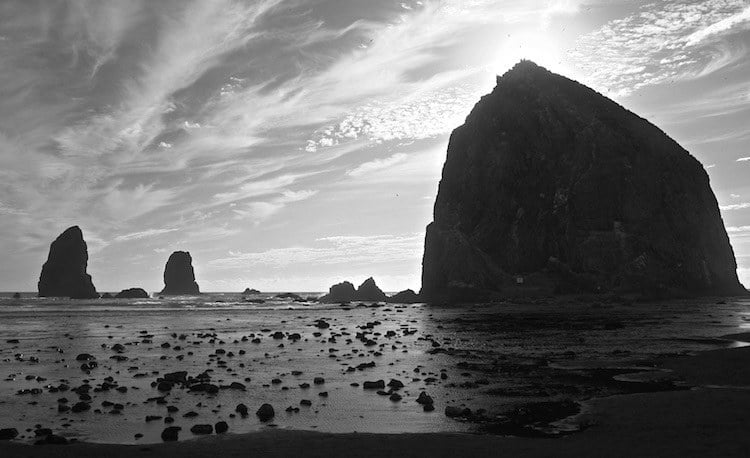 Between 10 and 17 million years ago, the Grand Rhode Mountains erupted, covering much of Oregon with black basalt. Haystack Rock and nearby features called the needles were formed at this time. Since then, water has eroded away Haystack Rock’s connection to the land, leaving it as a 235-foot tall monolith. 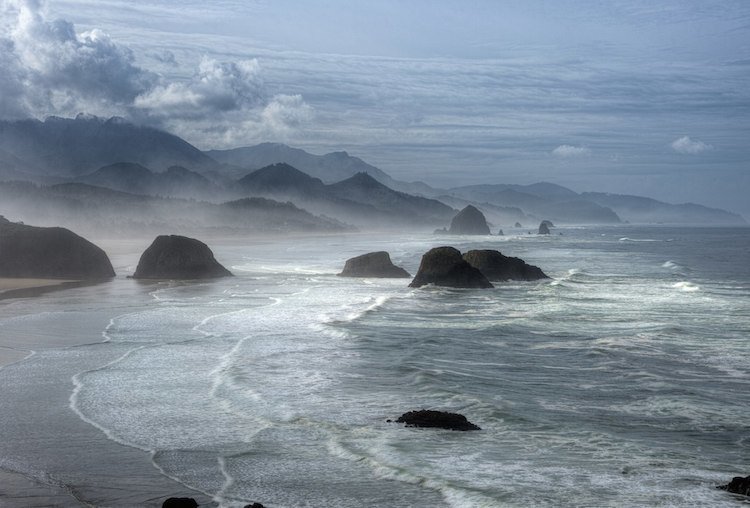 Haystack Rock isn’t the only weird wonder of the Oregon coast, however. About 80 miles to the south, the Devil’s Punch Bowl has been carved from sandstone by the persistent action of the waves and tides. Though it was once a sea cave, the top collapsed leading to a swirling cauldron of water at high tide.

Drive an hour south of the Devil’s Punch Bowl, and you’ll encounter another cave system with some adorable inhabitants. Sea Lion Caves is made of basalt and is home to some 200 sea lions. The caves are open to the ocean and have a large domed ceiling about 125 feet high.

A peek into what’s called the “Devil’s Punchbowl.” Source: Flickr 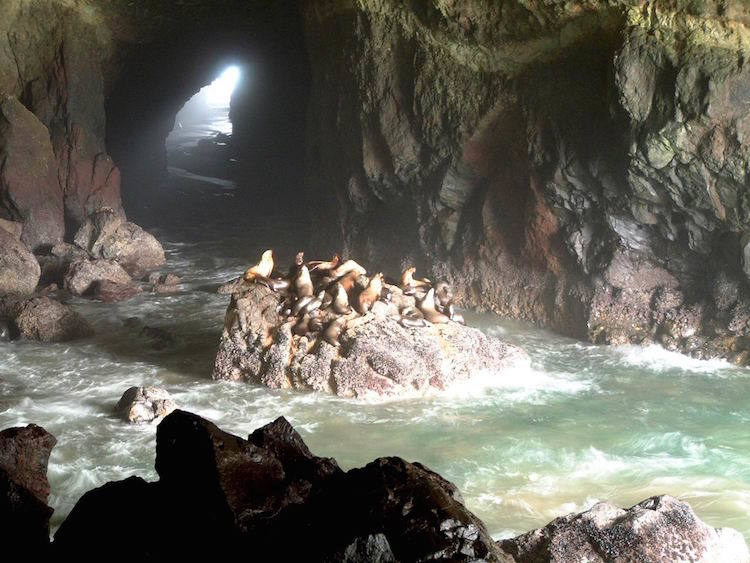 Sea lions in one of Oregon’s coastal caves. Source: Wikimedia 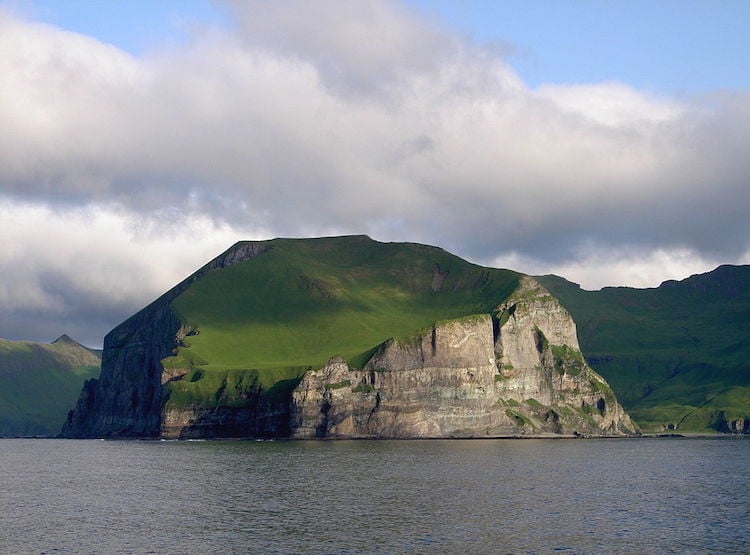 The Aleutian Islands from afar.

In terms of pure length, Alaska’s coastlines beat all the other states in the U.S. by miles. In fact, by NOAA’s estimate, Alaska has almost 34,000 miles of coastline – to put that in perspective, the entire width of the United States is 2,680 miles.

One of the most active volcanoes in the chain, Mt. Cleveland, has erupted at least 22 times in the last 320 years. According to the Alaska Volcano Observatory, the most recent significant eruption was in 2001. 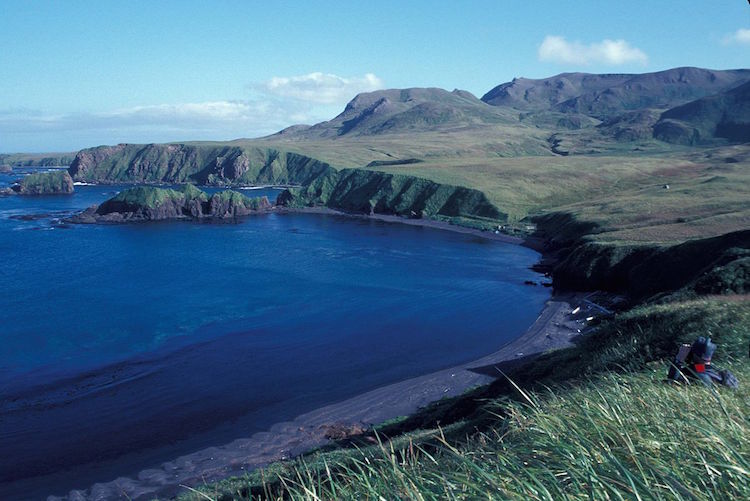 Source: US Fish and Wildlife Service

Volcanic activity continues to shape and reform these islands. Until 2008, a beautiful crater lake left from a past eruption graced Kasatochi Island with its presence. In August of 2008, Kasatochi suddenly erupted. The eruption caused a temporary drop in the water level of the lake and covered the island with volcanic ash and hot pyroclastic flow. 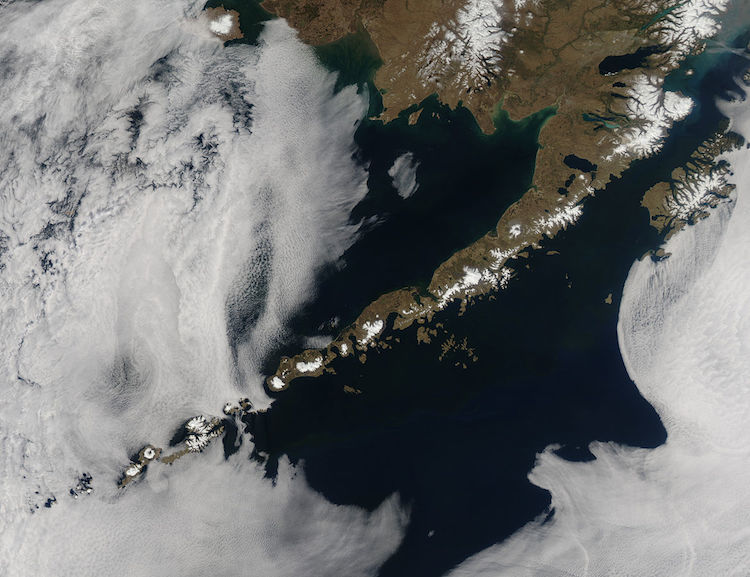 An aerial view of an Alaskan coast segment. Source: NASA 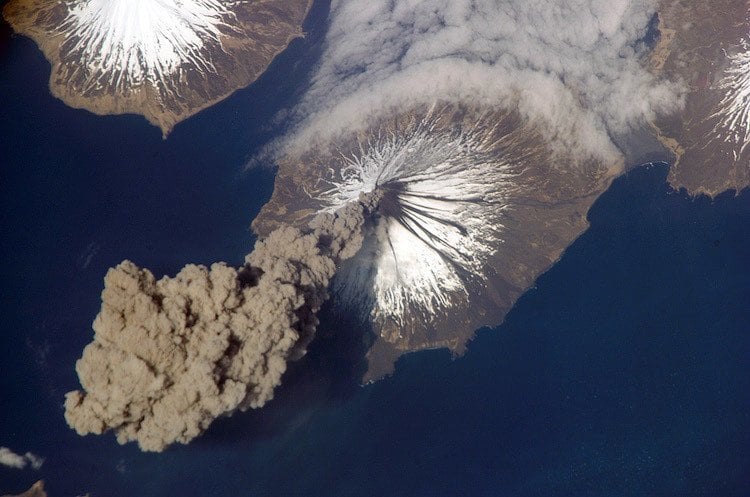 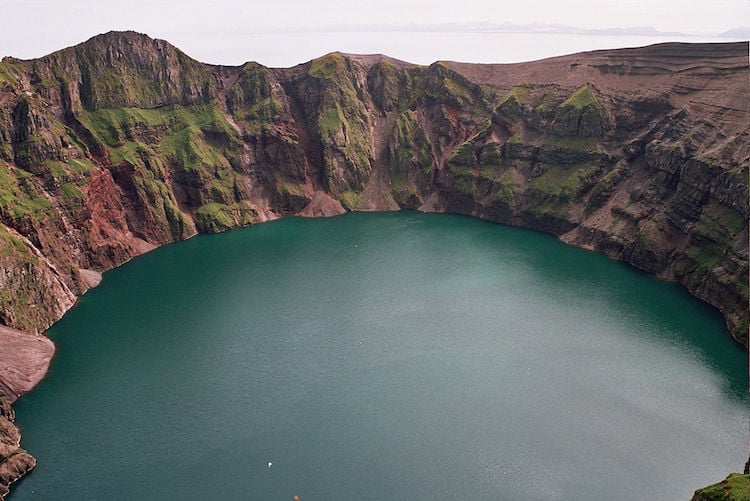 Crater Lake from above. Source: US Fish and Wildlife Service

Enjoyed this tour through America’s most beautiful coastlines? Check out these European natural wonders!