Amie Huguenard spent three years with her boyfriend Timothy Treadwell studying and filming grizzly bears in Katmai National Park — until a brown bear killed them both. 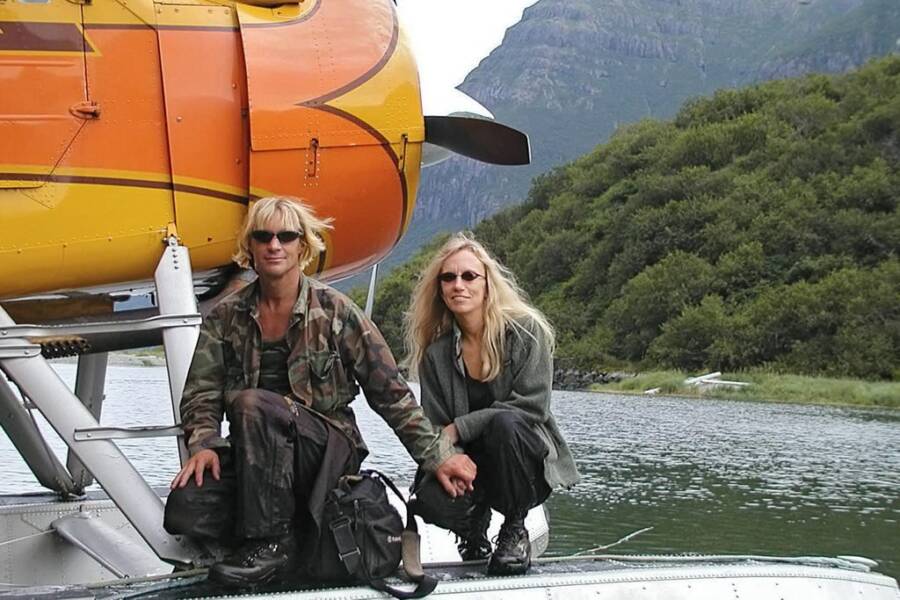 In the summer of 2005, Werner Herzog’s Grizzly Man made a minor celebrity of Timothy Treadwell, a man alternately seen as either a reckless crank or a naive idealist. And often in the background of the documentary was Amie Huguenard, the woman who accompanied Treadwell on his fatal last trip.

The film became one of Herzog’s most highly regarded works for its laser focus on Treadwell, an environmentalist with a troubled past who spent his summers with the bears of Alaska’s Katmai National Park. His eventual death in their jaws was something which surprised no one, least of all himself.

But the bear that mauled and ate Treadwell also tragically killed Amie Huguenard, a woman variously described as Treadwell’s girlfriend, partner, and even gullible victim.

In the years since their fate came to light, much of the conversation around them has ignored Huguenard, but hers is a tragic cautionary tale and one of promise cut short. 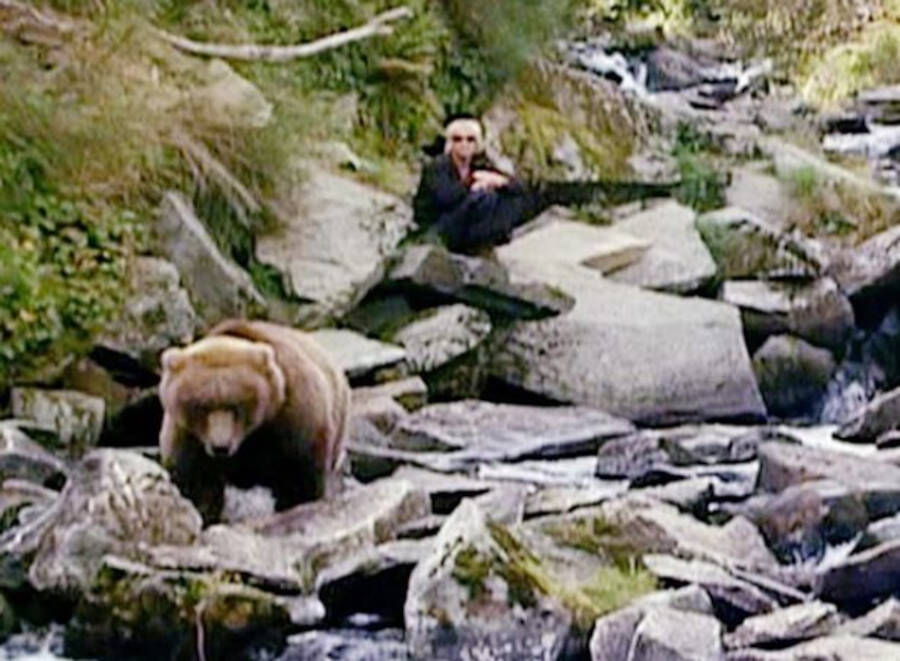 Lionsgate FilmsTimothy Treadwell gained widespread fame and notoriety for his interactions with grizzly bears, appearing on nationally syndicated talk shows and in schools as a bear advocate.

Amie Lynn Huguenard was born in Buffalo, New York, on October 23, 1965. She developed an interest in science and medicine and was also fascinated by the outdoors, spending much of her spare time hiking and climbing while working as a doctor’s assistant in Colorado.

It was during this period in 1997 that she read a book, Among Grizzlies, whose author claimed to have found solace from drug addiction in the company of Alaska’s brown bears. The writer’s name was Timothy Treadwell.

Soon, Amie Huguenard reached out to Treadwell, thus beginning a relationship which would last for nearly six years. It wasn’t long before she was flying up to Alaska to spend portions of the summers with him among the grizzlies of Katmai National Park.

During her annual trips north with Treadwell, Huguenard proved to be a capable companion. Her hiking and survival skills prepared her well for Katmai, over 12,000 square miles of wilderness home to more than 2,000 brown bears.

And in January 2003, she moved to live with him in Malibu, California, taking a position as a physician’s assistant at Cedars-Sinai Medical Center in Los Angeles.

Learning To Love The Grizzly Bears At Katmai National Park 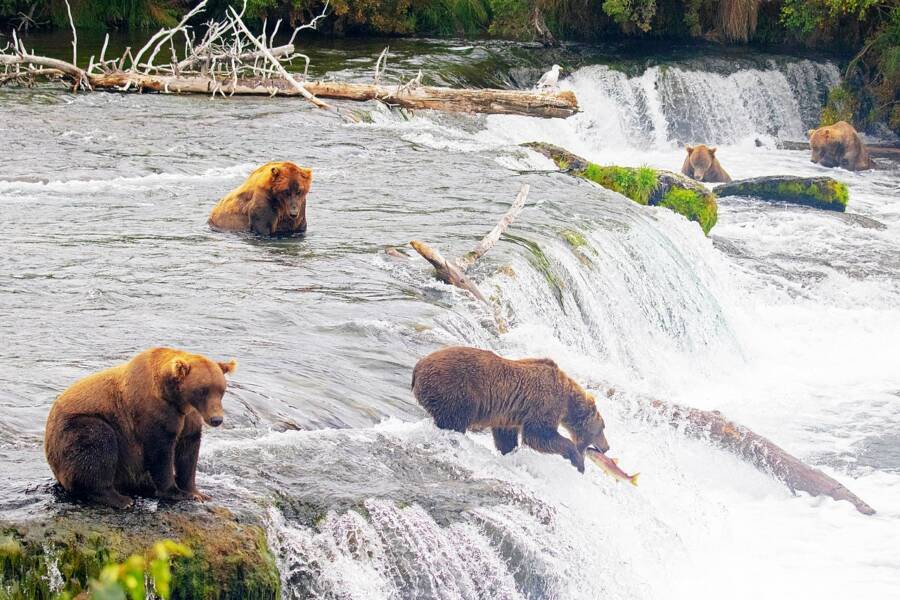 At first, Amie Huguenard was wary of the apex predators, which can weigh up to 1,000 pounds. But Treadwell had charm and a passion for the bears that assuaged her fear. He even once told David Letterman that they were nothing but “party animals.”

And during their summer visits, the bears were largely docile, spending much of their days resting and feeding, helping Huguenard to feel safe around them. Although she and Treadwell were anything but.

“Amie had a kind of naïveté about her that added a real sweetness to her entire persona. At times it was easy to convince her of things that were not entirely true,” Stephen Bunch, one of Amie’s old boyfriends, wrote after her death.

“But I always felt I could trust her because she bestowed the same trust in you unconditionally.”

Still, Amie Huguenard also witnessed Treadwell’s confrontations with the National Park Service. Park rangers were concerned that Treadwell was placing himself and others in danger by approaching the bears so closely and that he was maintaining dangerous camping practices on his quest to stop poachers.

And while the couple had evaded danger so far in their two trips together before the summer of 2003, their third season with the bears would prove tragically different.

Huguenard and Treadwell were sinking deeper into some critical mistakes. Crucially, and contrary to generations of Alaskan received wisdom and wildlife expertise, Amie Huguenard and Timothy Treadwell believed that the grizzlies were becoming “[their] animals.”

“Tim would honestly die if it meant these animals could live,” Huguenard wrote. 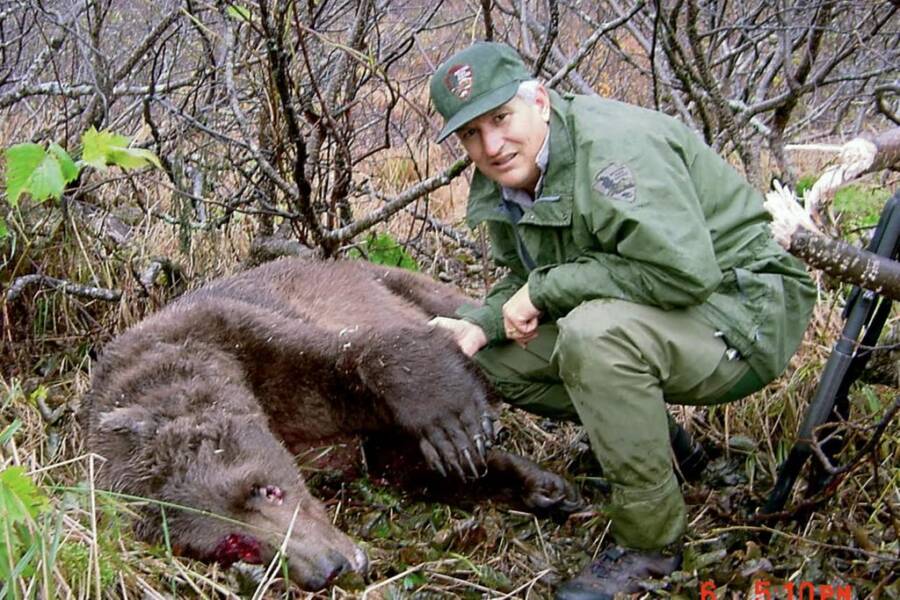 As the summer of 2003 drew to a close, the couple prepared to head home to California. But when Treadwell argued with a ticket agent over the cost of their flights, he decided to head back to Katmai for another week with Amie Huguenard in tow.

Fall is an exceptionally risky time to be around bears of all species, as they can become aggressive in their search for additional food to build up the fat reserves needed to survive hibernation. On October 1, Huguenard described a fight between bears over dwindling food supplies, and wrote that “seeing them claw, bite, and growl at each other made all of my fears come flooding back.”

Then, on Sunday, October 5, Huguenard wrote in her journal that “there’s a feeling in the air that makes me a little worried for some reason. Even Timothy has seemed a little off in a sense.” Treadwell spoke with a friend by satellite phone and described no problems with the bears.

That changed that night. An older male bear, desperate for food, approached their camp and attacked Treadwell. As it mauled him to death, a video camera recorded their last words, with Treadwell screaming that he’s “being killed out here.” From their tent, Huguenard urged him to “Play dead!” before telling him to fight back.

The last sounds captured on the six minutes of tape were her screams before she too was carried off by the grizzly bear and killed. 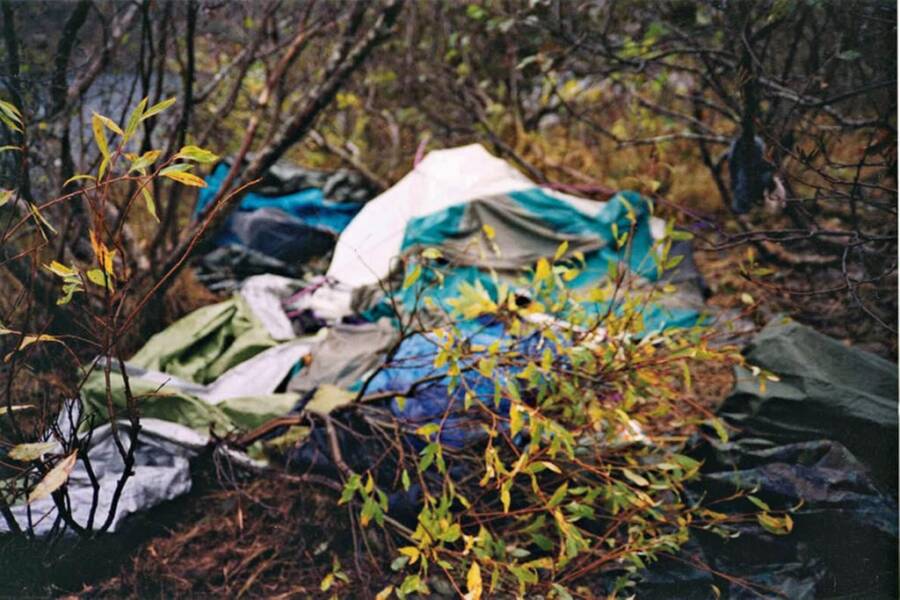 National Park ServicePilot Willy Fulton assumed that Huguenard and Treadwell’s tent had been flattened in preparation for their departure.

The next morning, Treadwell’s friend Willy Fulton arrived at the campsite on October 6 to pick him and Huguenard up. What he saw instead was a flattened tent and “a pretty nasty looking bear” hunched over a body. Park rangers called into the scene shot and killed the bear, who they estimated weighed over half a ton.

Near the tent, they found Treadwell’s severed head and an arm. The body on which the bear had been feeding was that of Amie Huguenard. In the stomach of the bear they’d shot were other human body parts. And exactly why Treadwell chose to return to Katmai so late in the year, and why Huguenard chose to follow him, has never been explained.

After learning how Amie Huguenard’s life was cut tragically short, read about the epic, week-long struggle between an Alaskan miner and the bear that tried to end his life. Then, learn about “Stuckie,” the mummified dog that’s been trapped in a tree for over 50 years.