Timothy Treadwell spent his life living with grizzly bears and forming close relationships with them. He never imagined they would one day turn on him.

Ever since humans emerged as the dominant species, separated from the animals by a few short links in the evolutionary chain, they’ve been trying to prove that they aren’t all that different. That the difference between man and beast is only appearance and that deep down we are really all animals.

In a world of animal anthropomorphism, there have been those who have blurred the line between man and beast and ended up serving as a cautionary tale. Roy Horn and Montecore, the white tiger who mauled him on stage. Bruno Zehnder, who froze to death while living amongst the penguins in Antarctica. Steve Irwin, killed by a stingray as he was filming them for a documentary. However, none quite measure up to the impact made by the death of Timothy Treadwell, the man who lived and died amongst the wild grizzly bears of Alaska. 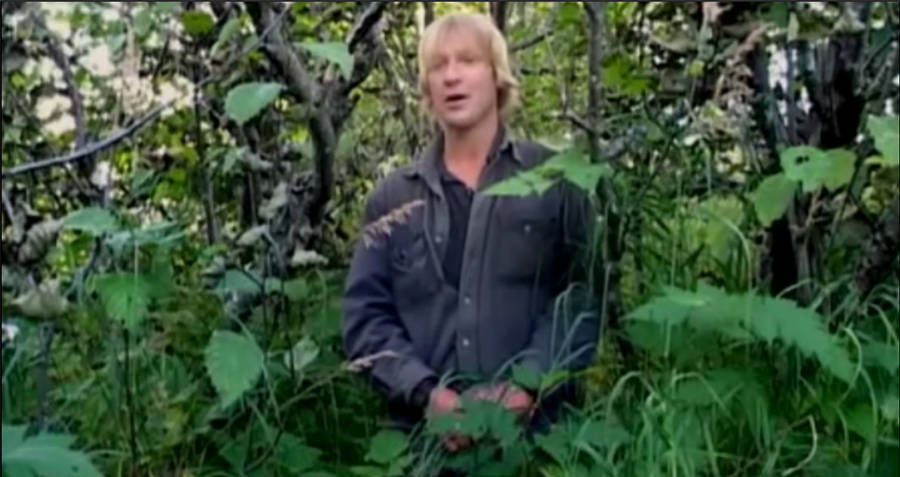 YouTubeTimothy Treadwell in a self-made video.

Known as the “Grizzly Man,” Timothy Treadwell was, above all else, a bear enthusiast. His passion for the creatures led him to a passion for environmentalism and documentary filmmaking, the subject of which was the grizzly bears of Katmai National Park in Alaska.

Beginning in the late 1980s, Treadwell began summering in Alaska. For 13 summers in a row, he would camp along the Katmai Coast, an area of Alaska well known for its large grizzly bear population. During the early part of the summers he would stay on the “Big Green,” a grassy area on Hallo Bay. Later, he’d move south to Kaflia Bay, an area with thick brush.

Big Green was good for sighting bears as the grass was low and visibility was clear. Treadwell called it the “Grizzly Sanctuary” since it was where they came to rest and mosey around the coast. The Kaflia Bay area, thicker and more densely wooded, was better for getting in close contact with the bears. Referred to as the “Grizzly Maze,” the area was full of intersecting grizzly trails and was much easier to hide in. 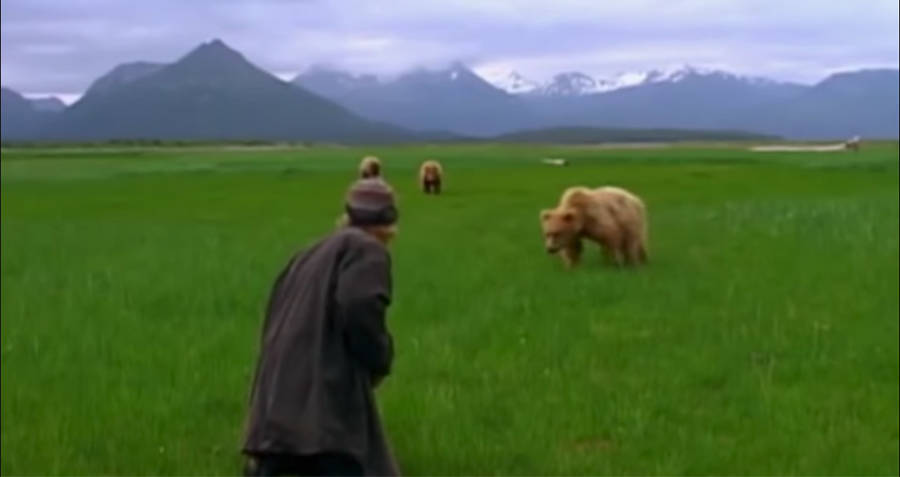 YouTubeTimothy Treadwell coaxing a bear toward him.

While camping, Treadwell would get up close and personal with the bears, and film all of the interactions on his video camera. Some of the videos even showed him touching the bears and playing with cubs. While he claimed he was always careful to develop a sense of trust and mutual respect, there were many who thought otherwise.

Over his 13 summers, Timothy Treadwell made quite a name for himself.

Park rangers and the National Park Service warned Treadwell that his relationship with the bears would inevitably turn deadly. Not only were the bears enormous, weighing up to 1,000 pounds and standing taller than a man when up on their hind legs, they felt he was interfering with the natural order of the parks.

In 1998, they issued him a citation for carrying food in a tent, a known attractant of bears, along with several other infractions for illegal camping practices. They even imposed a new rule due to his inability to follow their other ones, known as the “Treadwell Rule.” It states that all campers must move their camps at least one mile every five days in order to keep the bears from getting too comfortable with humans.

However, despite the warnings, Treadwell continued to camp and interact with the bears. Within several years, his insistence on maintaining close contact with them would lead to his gruesome and horrifying downfall. 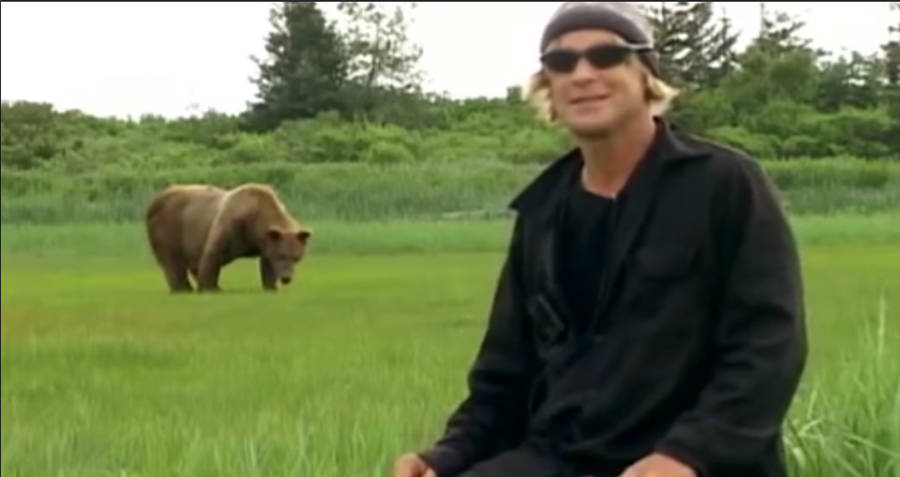 YouTubeTreadwell and his favorite bear, which he called “Chocolate.”

In October of 2003, the bear enthusiast and his girlfriend Amie Huguenard were in Katmai National Park near Treadwell’s old stomping grounds in the “Grizzly Maze.” Though it was past the time when he usually packed up for the season, he had decided to extend his stay to locate a favorite female bear of his.

Around this time, friends and family say he had withdrawn from the modern world, and even Treadwell admitted he felt far more comfortable in nature with the bears than he ever did with humans. He was getting increasingly reckless.

He knew that October was when bears were storing up food for the winter, gaining fat for hibernation, and increasing aggression, yet he still camped out in their paths. This was especially dangerous as park visitors are prohibited from bringing guns and Treadwell was not carrying bear repellent spray.

On the afternoon of October the 5th, Treadwell and Huguenard checked in with a colleague in Malibu by satellite phone. Then, just 24 hours later, both campers were discovered dead, torn apart by a bear.

Timothy Treadwell and Amie Huguenard’s remains were discovered by their air taxi pilot, who had arrived at their campsite to pick them up. At first, the campsite seemed abandoned. Then, the pilot noticed the bear, stalking the area as if guarding his prey.

The air taxi pilot quickly alerted park rangers who arrived and searched the area. They found the couple’s remains quickly. Treadwell’s mangled head, part of his spine, his right forearm, and his hand were recovered a short distance from the camp. His wristwatch was still attached to his arm and still ticking. Amie Huguenard’s remains were found partially buried under a mound of twigs and dirt next to the torn tents.

The park rangers were forced to kill the bear as it attempted to attack them as they recovered the remains. Another younger bear was also killed when it charged the recovery team. A necropsy of the larger bear revealed human body parts in its abdomen, confirming the rangers fears – Timothy Treadwell and his girlfriend had been eaten by his beloved bears. In the park’s 85-year history, this was the first known bear-inflicted death. 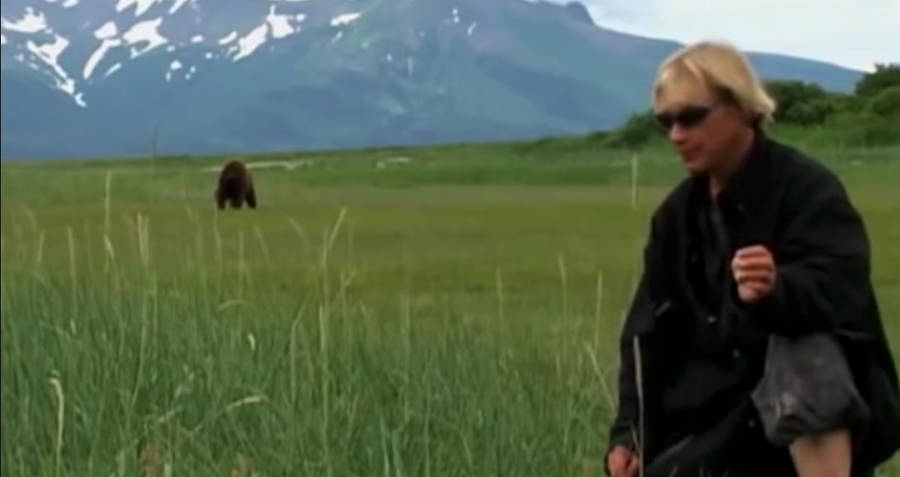 YouTubeTimothy Treadwell on the “Big Green” with a bear.

However, the most horrifying part of the scene wasn’t discovered until after the bodies had been moved.

As the bodies were taken to the morgue, the rangers searched the couple’s tents and belongings. Inside one of the torn tents was a video camera with a six-minute tape inside. At first, it appeared that the tape was blank, as there was no video.

However, the tape was not blank. Though the video was dark (as the result of the camera being in a bag or having the lens cap on) the audio was crystal clear. For six agonizing minutes, the camera captured the end of Huguenard and Treadwells’ lives, recording the sound of their screams as a bear ripped them apart.

The audio suggests that the video was turned on moments before the attack and that Treadwell was attacked first while Amie Huguenard attempted to fend the bear off. The audio ends with Huguenard’s horrified screams as she is killed.

The audio cut off after six minutes when the tape ran out, but those six minutes were traumatizing enough. After the rangers collected it, they refused to share it with anyone, keeping it from the public despite several filmmakers’ attempts to get their hands on it. According to those who have heard it, it leaves a harrowing impression.

After Timothy Treadwell’s death, park rangers made it clear that while this was a rare incident, it serves as a reminder that bears are deadly animals.

After reading about Timothy Treadwell and his gruesome death at the hands of his beloved grizzly bears, check out the guy who was attacked by the same grizzly bear twice in one day. Then, read about the fabled “king polar bear.”