8 Of The World’s Most Brutal Amusement Park Accidents, From An Uncontrollable Fire To A Stomach-Churning Free Fall

While you're more likely to be struck by lightning than experience an accident at the theme park, these amusement park disasters show what happens when a day of fun turns into a nightmare.

Amusement parks are generally safe — provided you keep your arms and legs inside the vehicle at all times and avoid restricted areas. Yet accidents still happen — and these amusement park disasters show the deadly side of these rides.

From the early 1900s to early 2022, the eight disasters featured here are among the most tragic and unfortunate to befall parkgoers worldwide. Between fires, loosened harnesses, crashing cars, and seriously poor structural engineering, you may find yourself tensing up the next time you’re about to board a ride.

The Amusement Park Death Aboard The Orlando Free Fall 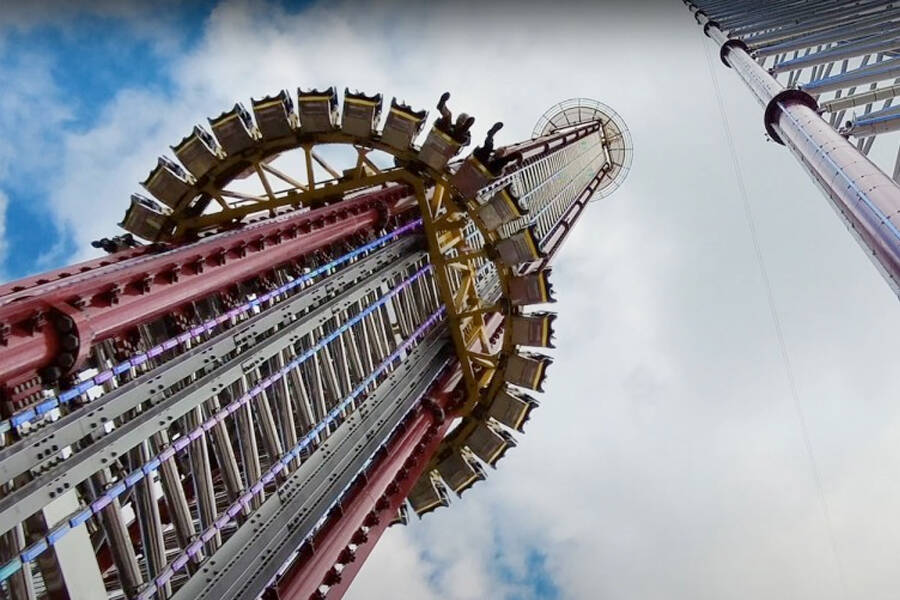 Visit Orlando/YouTubeThe Orlando Free Fall in ICON Park stands at 430 feet tall, making it the tallest ride of its kind.

The Orlando Free Fall in ICON Park finished construction in October 2021, but only six months later it had to be shut down after a 14-year-old boy fell from the top of the tower, plummeting over 400 feet to his death.

According to NBC News, Nikki Fried, a commissioner from Florida’s Department of Agriculture and Consumer Services, determined upon investigation that “manual adjustments” had been made to the ride by its operator, resulting in the death of Missouri teen Tyre Sampson.

Sampson was reportedly unsecured in his seat so that when the Free Fall reached its peak at 430 feet, Sampson slipped through the opening between his seat and the restraints, falling to his death on March 24, 2022.

Fried said that adjustments to the seat’s sensor allowed “the harness-to-restraint opening to be almost double that of the normal restraint-opening range. These mis-adjustments allowed the safety lights to illuminate, improperly satisfying the ride’s electronic safety mechanisms that allowed the ride to operate even though Mr. Sampson was not properly secured in the seat.”

The ride was ultimately shut down during the investigation, and Sampson’s family is suing the ride’s owner, manufacturer, and landlord for failing to warn him that his size might be a risk, as well as failing to provide adequate restraints.

Hopefully, they can find some justice.