The assassination of Gianni Versace captivated the nation, but there was much more to serial killer Andrew Cunanan than the public knew. 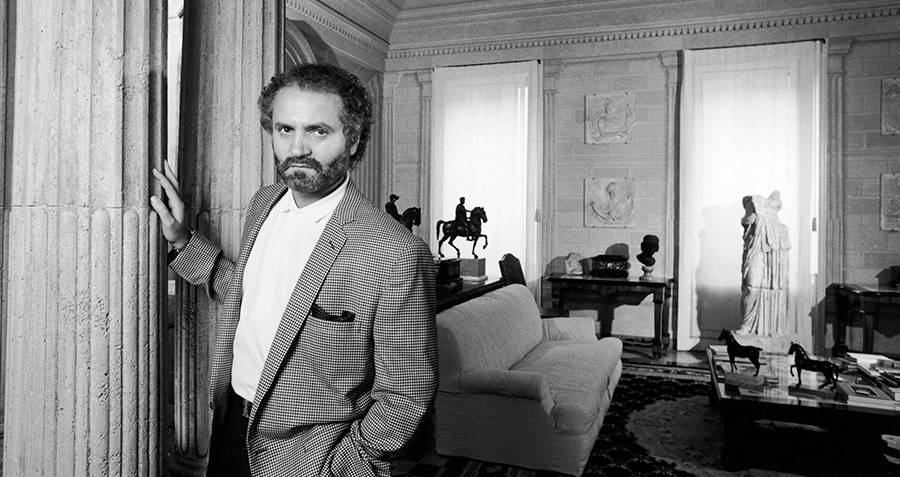 Getty ImagesGianni Versace, who would later be killed by Andrew Cunanan on July 15, 1997.

“I don’t know that we are ever going to know the answers.” 20 years later, Miami Police Chief Richard Borerro is still right — we don’t have all the answers about the murder of fashion mogul Gianni Versace. But we do know that a serial killer was responsible. His name was Andrew Cunanan.

The morning of July 15, 1997, dawned clear and bright in Miami Beach. Gianni Versace meandered through the streets in the general direction of a local cafe.

Versace had called South Beach home for five years, and he almost invariably sent his assistant out for his coffee. Police never discovered why he went himself that morning — but the decision meant it would be his last coffee run.

The hostess of the cafe reported that Versace seemed wary. He had walked past the entrance to the shop and circled back around before entering — almost, she thought, as if he knew someone was following him. 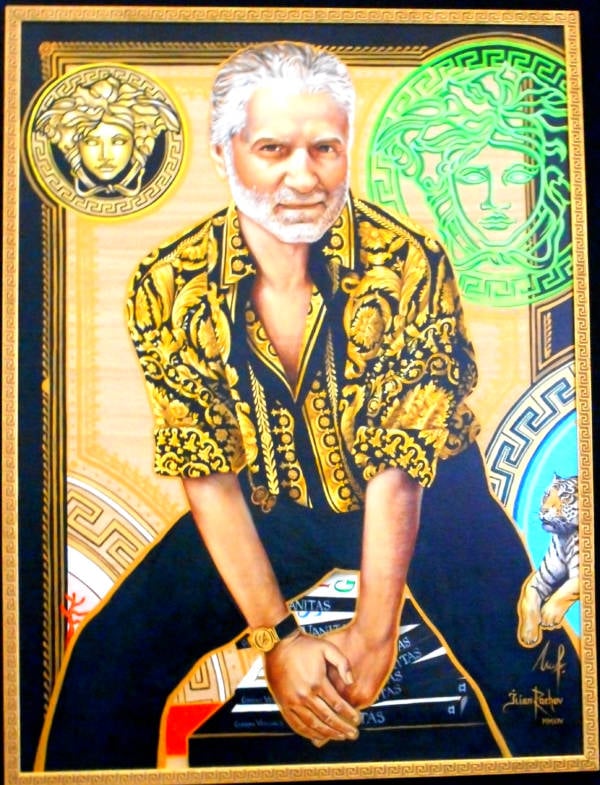 Carlo Raso/FlickrA portrait of Gianni Versace, displayed at the National Archaeological Museum in Naples in 2017. His iconic medusa logo appears behind him.

After getting the local paper, he left quickly and made his way back to his mansion on Ocean Drive, a 15-block stretch of road known for Art Deco hotels and architecturally unusual homes. As he arrived back at his mansion, Casa Casuarina, disaster struck.

The nature of the attack is still debated by witnesses — but the results were incontrovertible: Gianni Versace didn’t survive.

Some witnesses claim that as Versace was opening the front gate of his home, he was approached by a young man in his mid to late twenties. The man ambushed him from behind and put two bullets in his head. 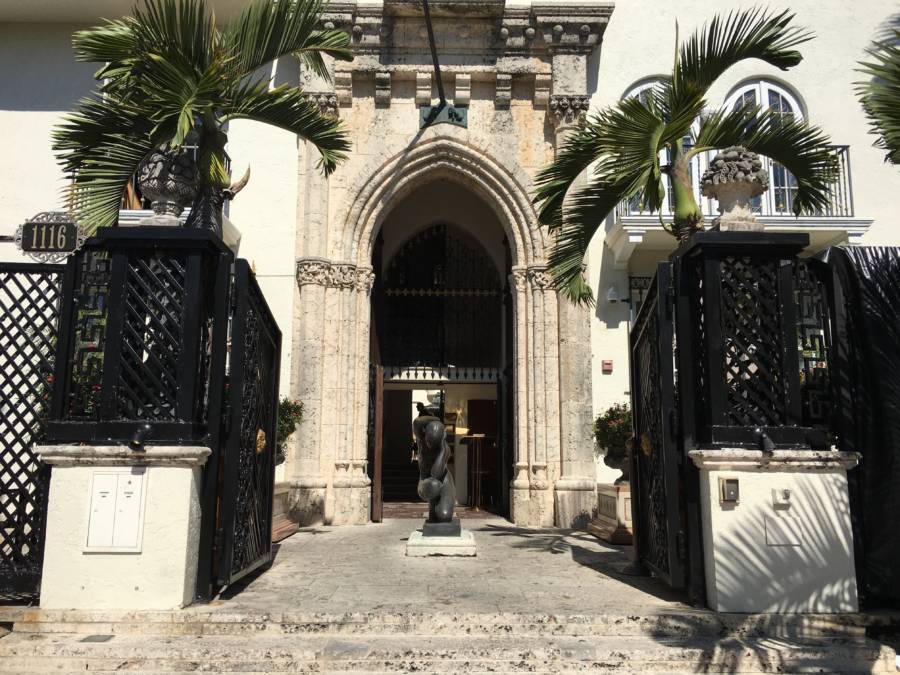 Another witness said there was more of a struggle. The man and Versace seemed to know each other and were fighting over a bag when a gun went off.

Both stories end the same way: Giovanni Maria Versace, the creative architect behind one of history’s greatest international fashion houses, lay dead on the steps of his ornate, multimillion-dollar Mediterranean villa. 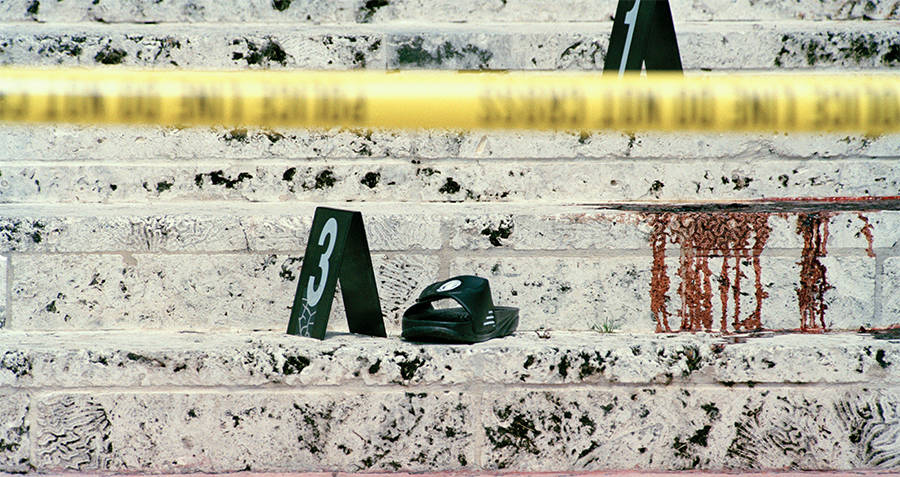 Getty ImagesThe steps of Versace’s mansion after his death.

Versace’s murderer didn’t get far, and when police caught up with him, they were stunned to discover that he was already known to them: Andrew Cunanan. Gianni Versace had been shot by a serial killer.

Andrew Cunanan was a 27-year-old fugitive from California. In the three months prior to Versace’s murder, he had killed four other men in a cross-country killing spree.

One month before the crime, he had been placed on the FBI’s Most Wanted list. Four days before shooting Versace, he had almost been apprehended in a Miami subway shop.

But to this day, nobody knows why Gianni Versace was his final victim. 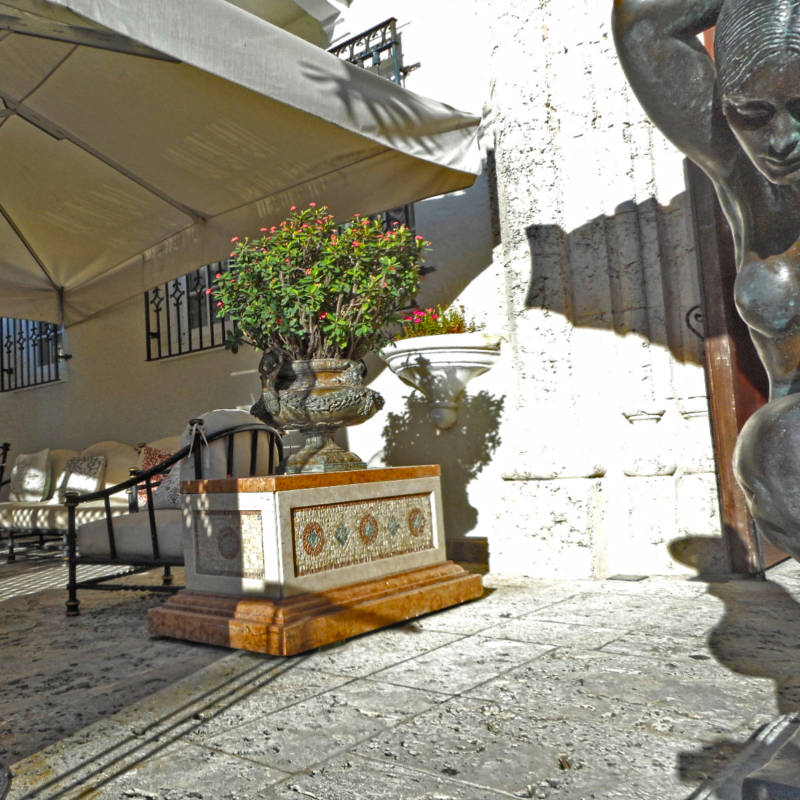 Police combed through Cunanan’s past in a futile attempt to make sense of the killing. After dropping out of school, Andrew Cunanan began making money by befriending wealthy older men who would shower him with expensive clothing, trips to Europe, limitless credit cards, and even sports cars.

In San Francisco, he became well known in the gay community as a flashy gold digger who would use his wealthy older friends’ money to show off to younger, more attractive men in clubs.

His own mother described him as a “high-class male prostitute,” though none of his friends believe he charged for his services. He was simply a charming man, highly skilled at manipulation.

He was also unhinged, though few suspected it at the time. Many of the men he seduced into a cash flow described him as busy and having a certain “air” about him that suggested he always had better places to be.

Men his own age tended to dislike him, suspicious that he must be doing something illegal to sustain his lavish lifestyle. When he was dumped by his final lover, friends say it devastated him beyond repair. 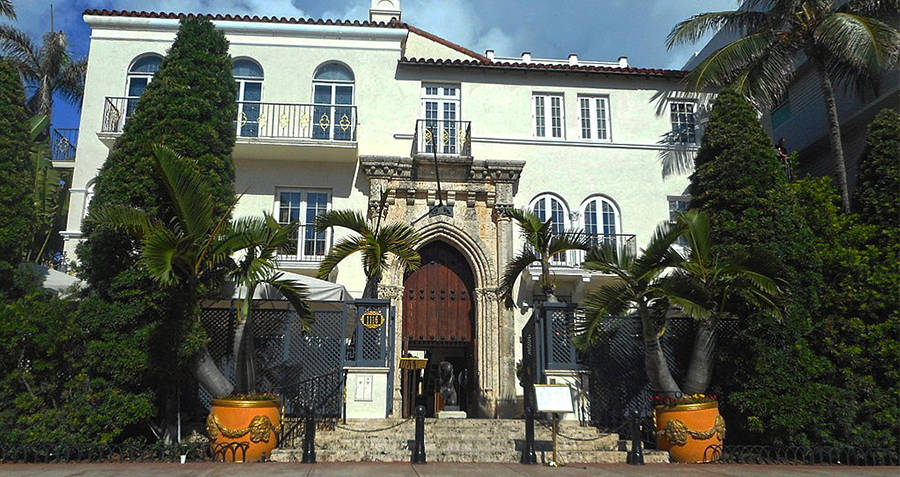 He began his killing spree in April of 1997, starting with a Minneapolis former naval officer turned propane salesman. The man was an acquaintance Cunanan had met back in California.

Following an argument, Cunanan beat the man with a claw hammer and rolled his corpse into a rug.

He then killed another man, a former lover of his in Rush City, Minn., by shooting him in the head and in the back.

From Minnesota, Andrew Cunanan moved to Chicago. There, he brutally killed an old man named Lee Miglin, a prominent real estate tycoon. Miglin was found with his hands and feet bound, his body stabbed by a screwdriver and his throat slit with a hacksaw.

It was after this murder that Cunanan became the 449th person on the FBI’s Most Wanted list. 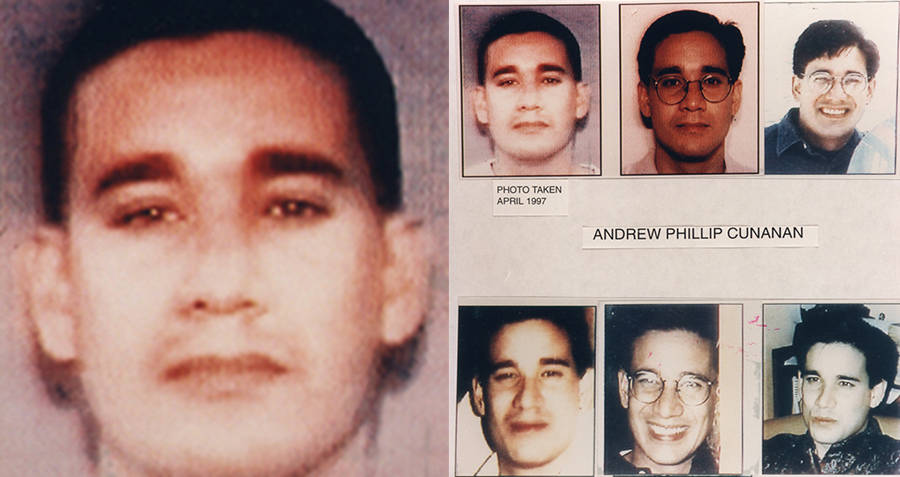 Five days after his Chicago murder, Cunanan killed a New Jersey man, the caretaker of the Finn’s Point National Cemetery, before fleeing to Miami Beach.

The murders were messy, and they were committed with increasing carelessness. In the first victim’s apartment, police found a bag with Cunanan’s name on it, as well as a message Cunanan himself had left on the answering machine.

In Chicago, Cunanan let himself be seen with the murder victims on several occasions leading up to the crimes. After escaping to Miami, he seemed to care even less, using his own name to pawn stolen items. 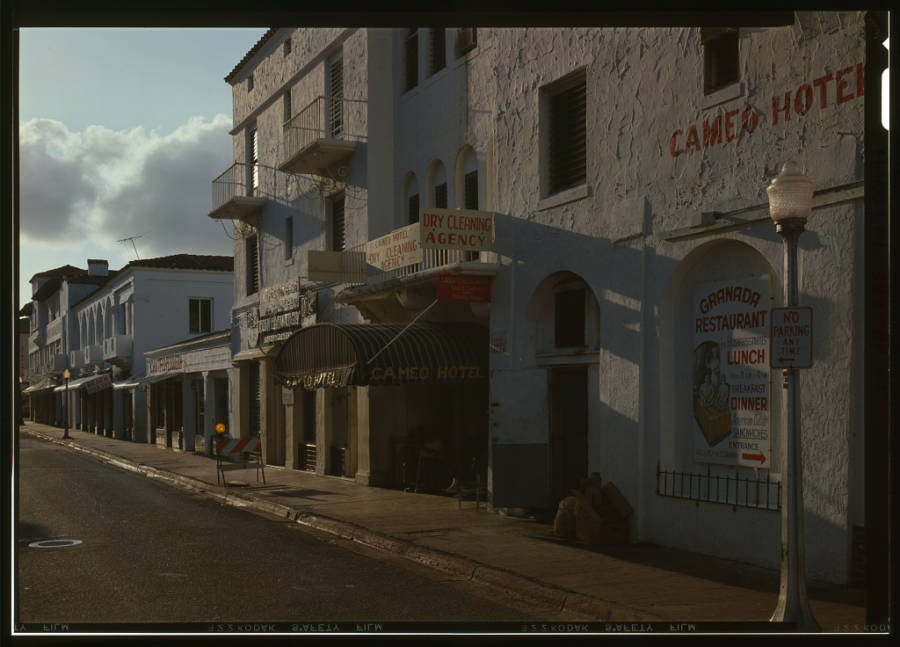 It wasn’t until Andrew Cunanan’s public, broad-daylight murder of Gianni Versace that police were able to instigate an active manhunt. One onlooker pursued Cunanan as he fled from the steps of Casa Casuarina, though Cunanan quickly disappeared.

A car was found, stolen from his New Jersey victim, with Cunanan’s belongings inside. Police searched the city, responding to tips from shop owners and hotel staff — but they were too slow.

Eight days after Versace’s murder, Andrew Cunanan killed himself in the bedroom of a Miami houseboat. Though the houseboat where he died was searched, no note and very few belongings were found.

Cunanan took his secrets to the grave. If the truth was going to be discovered, it wouldn’t be with his help.

The Cunanan Connection And Versace’s Legacy 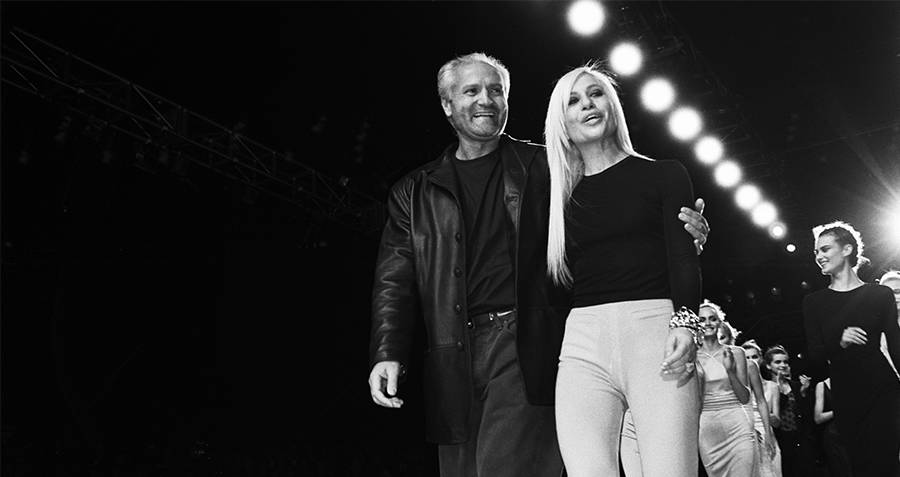 Getty ImagesGianni and his sister Donatella, who took over the company after his murder.

Rumors swirled that Cunanan had met Versace in the early 90s, at a club in San Francisco. An acquaintance of Cunanan’s suggested that the pair had met briefly while Versace was designing costumes for the San Francisco Opera.

Another friend said that Cunanan only knew Versace through one of Versace’s entourage. The FBI admits that a meeting between the pair was likely, but the extent of their relationship remains unknown.

Though Gianni Versace himself is gone, his legacy lives on. His funeral was one of the largest ever held in Milan and was attended by the likes of Elton John and Diana, Princess of Wales. 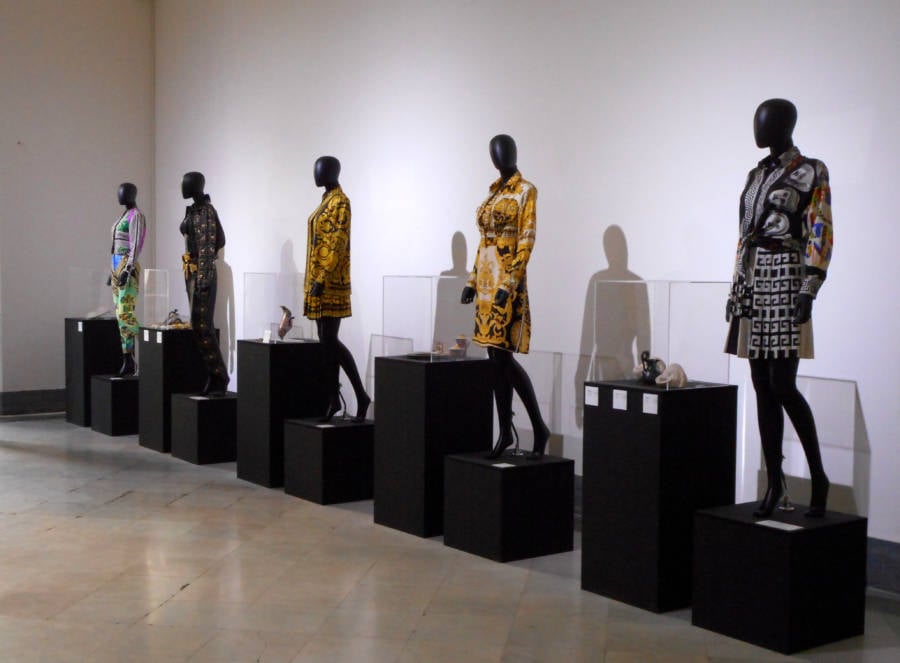 Carlo Raso/FlickrTwenty years after Versace’s death, the National Archaeological Museum in Naples displays a selection of Gianni Versace designs in 2017.

Gianni’s sister Donatella has since pushed his fashion empire to even greater heights, turning Versace into a household name. His mansion, Casa Casuarina, has been maintained much as it was when it belonged to the Versace family — though it now also serves as a boutique hotel.

Today, fans of his unique fashion and curious crime aficionados alike can stand on the steps where Gianni Versace took his final breath. They can walk down Ocean Drive and stroll by Art Deco homes — the very ones that Andrew Cunanan fled past after he committed the murder that shocked the fashion world and made him infamous.

Want more murder and mayhem? Read about Leopold and Loeb, two students who believed they could commit the perfect murder. Then check out Chicago’s notorious hit squad, Murder Inc.