On October 7, 2006, Anna Stepanovna Politkovskaya was shot dead in her Moscow apartment building after having spent years criticizing Vladimir Putin and the Second Chechen War. 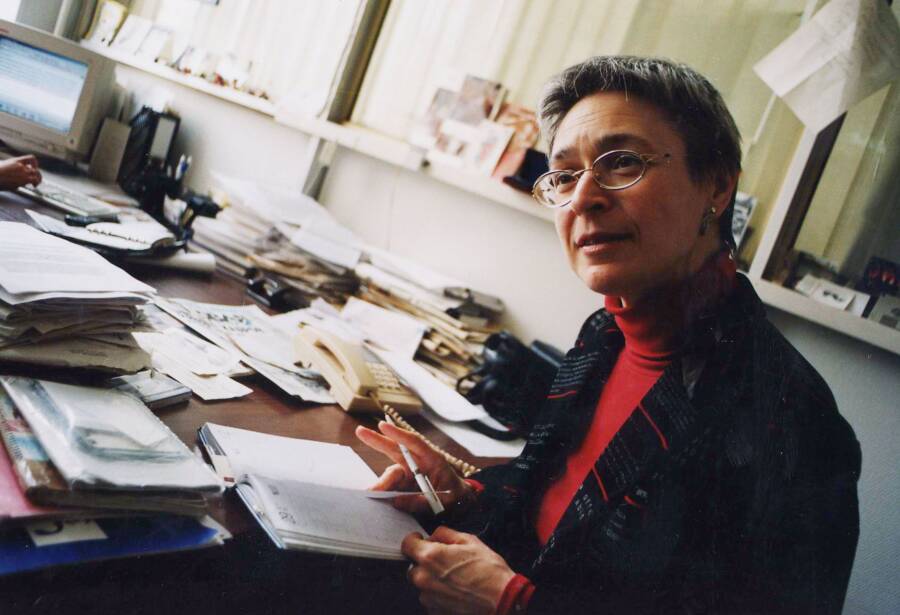 Novaya Gazeta/Epsilon/Getty ImagesRussian journalist Anna Politkovskaya dedicated her career to exposing the plight of Chechen civilians and others affected by the Second Chechen War, only to be mysteriously murdered for speaking out.

On the night of Oct. 7, 2006, Russian journalist Anna Politkovskaya was shot at point blank range in the lobby of her apartment building. And while the man who pulled the trigger was apprehended, he had no known association with Politkovskaya, leading to the unanimous conclusion that someone had paid to have her killed.

Over the course of her 26-year in journalism reporting on human rights violations in Russia, Politkovskaya had made powerful enemies in both Russian president Vladimir Putin and Ramzan Kadyrov, the head of the Chechen Republic. She was subjected to death threats, poisoned, and even captured, beaten and mock executed.

And from 1999 until her death, she worked as a war correspondent for the independent investigative newspaper Novaya Gazeta, reporting from the front lines during the Second Chechen War. She took it upon herself to chronicle the corruption of her homeland, and, in Chechnya, she chronicled abuses by Russian troops and their loyalist Chechen militias, run by Kadyrov.

After the collapse of the Soviet Union, many in Russia and abroad were hopeful that a new era of democracy and prosperity would ensue. But her murder signalled the end of the freedom of the press in Russia. And it remains unsolved to this day. 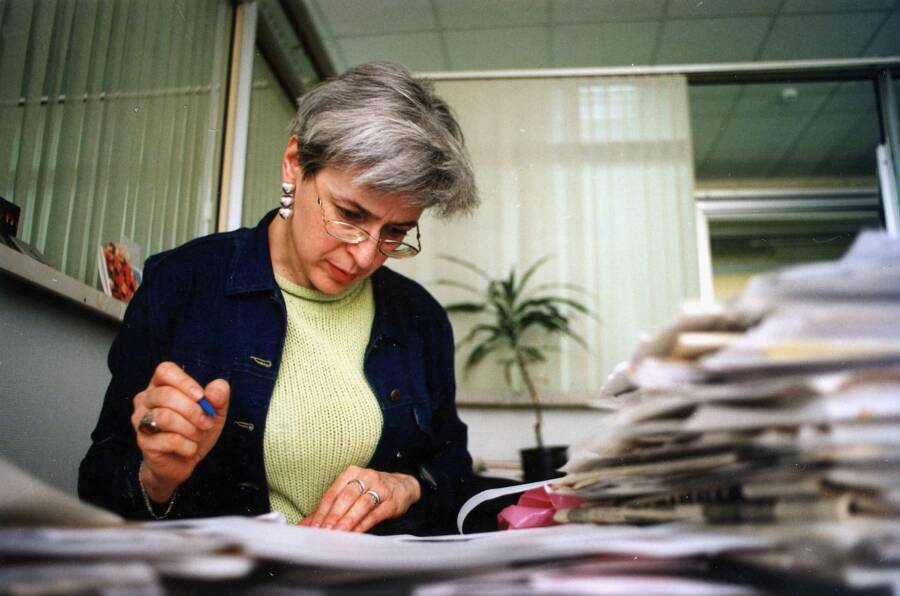 Born Anna Mazepa to diplomats in New York in 1958, Anna Stepanovna Politkovskaya began her career in 1980 as a journalist for the Moscow broadsheet newspaper Izvestia. She also wrote for the in-flight magazine of Aeroflot, the Russian state-owned airline, which enabled her to meet people and see places from which she’d been insulated all her life.

“Thanks to this, I saw the whole of our huge country.” Before that, she said, “I didn’t know life at all.”

In 1991, the Soviet Union suddenly and dramatically collapsed. Ripples of unrest and instability emanated from the Kremlin as states in Eastern Europe and the Caucasus broke free, and age-old conflicts covered up by Soviet power reemerged.

One of the most volatile regions was Chechnya, a mountainous territory between Russia and Turkey populated by an ancient Muslim clan-based society. The Chechens had suffered decades of persecution at the hands of Soviet authorities, both for their perceived lack of loyalty to Russia and for their religion.

Anna Politkovskaya In The Chechen War 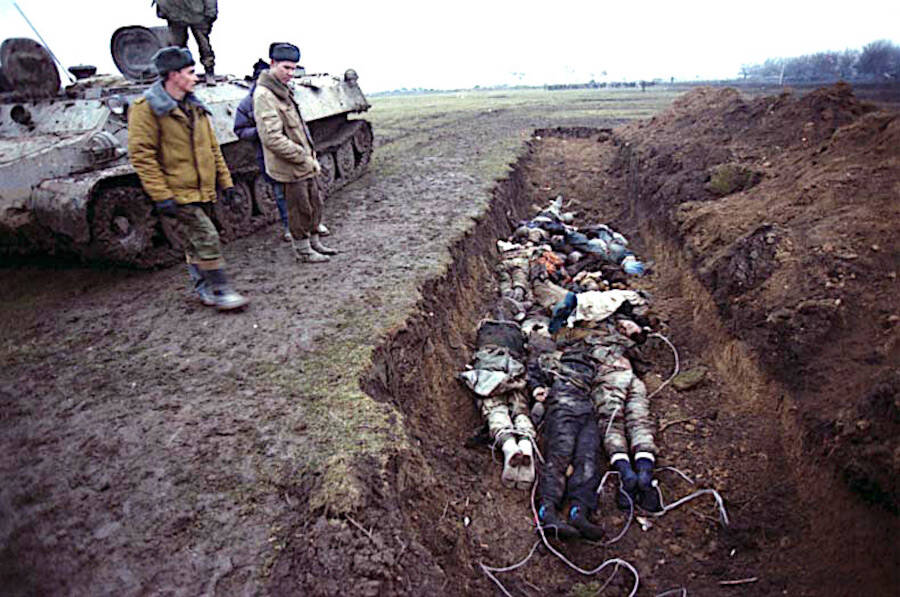 Natalia Medvedeva/IPV News via Wikimedia CommonsRussian troops burying Chechen civilians in a mass grave in 2000. 200,000 or more civilians died between the First and Second Chechen Wars, and nearly a million were displaced.

The peace in Chechnya was short-lived. On Aug. 7, 1999, Chechen militants invaded the Russian territory of Dagestan.

Boris Yeltsin and his increasingly powerful prime minister, Vladimir Putin, decided that the presence of militants in Chechnya could no longer be tolerated. The ensuing aerial bombing and ground invasion left thousands dead and tens of thousands homeless.

Politkovskaya, now a senior reporter for Novaya Gazeta, an investigative newspaper set up by Mikhail Gorbachev, was picked to cover the unfolding crisis. By her own admission, Anna Politkovskaya was not a war correspondent. But that, she explained, was precisely why her editor sent her to Chechnya:

“The very fact that I’m just a civilian gives me that much deeper an understanding of the experiences of other civilians, living in Chechen towns and villages, who are caught in the war.”

But the war zone was dangerous, and many seasoned journalists stayed out of the region and away from the horrific violence there. Members of the media were at risk of kidnapping, torture, and death at the hands of both soldiers and militants who wanted the nightmare covered up.

On The Ground In Chechnya 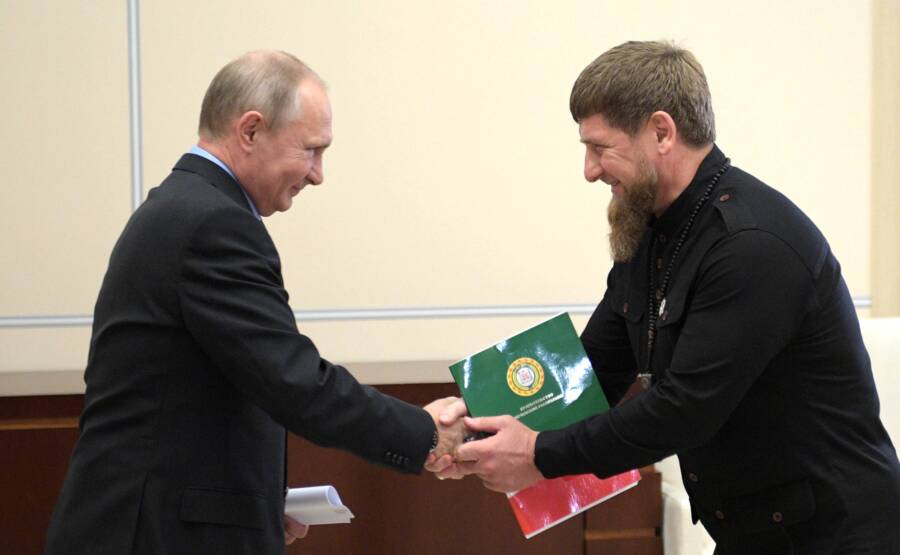 What Politkovskaya found on arrival in Chechnya in 1999 was violent chaos. Grozny, the capital, was a bombed-out shell, and Akhmad Kadyrov, a leading separatist in the First Chechen War, had switched sides and joined the Russians. His son, Ramzan Kadyrov, was given command of the Kadyrovtsy, a militia feared for its savagery.

Politkovskaya related the experiences of ordinary Chechens and conscripted Russian soldiers equally, but took particular note of the suffering endured by civilians.

Russian planes bombed villages through which Islamist rebels had passed. And Chechens suspected of sympathizing with or aiding the rebels were often taken by force to “filtration points,” military sites where soldiers routinely had them beaten, mutilated, tortured, raped, and killed.

Her sympathy and fairness endeared her to the Chechen people, who often trusted Politkovskaya to pass along messages to family members, track down missing loved ones, and intercede with federal troops and militants to secure the release of hostages. But the attention she drew to crimes against humanity and abuses by Russian forces and the Kadyrovtsy earned her their hatred.

Soon, Politkovskaya began receiving death threats. And in 2001, she was arrested, questioned, beaten, and subjected to a mock execution by Russian soldiers.

Three years later, she was poisoned while on a flight to cover the Belsan school siege, which ended with the deaths of 334 people — more than half of them children — when Russian troops launched an assault on the building with rockets and tanks.

Yet none of these deterred her, and she continued to report on Chechnya even as her enemies closed in. 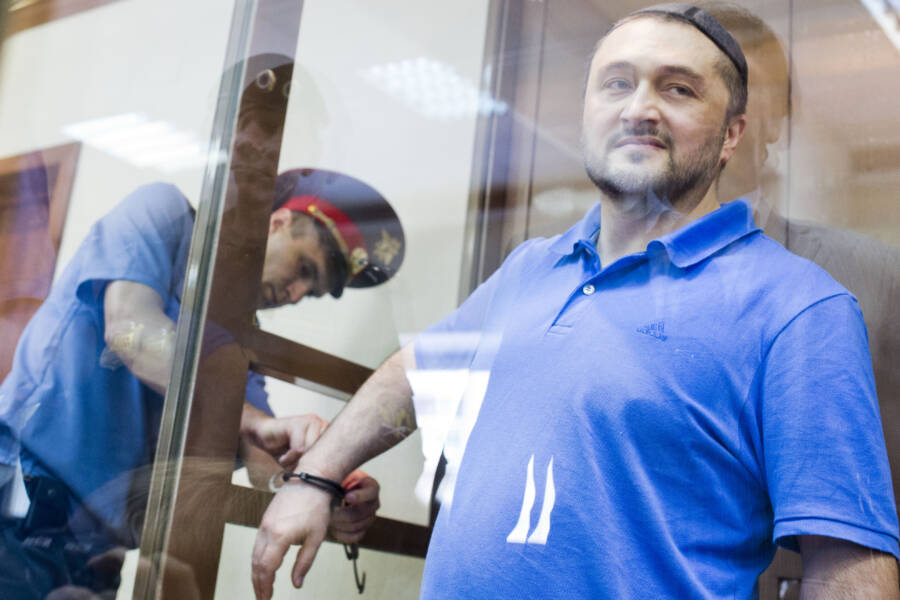 Evgeny Feldman/AFP via Getty ImagesIn 2014, Rustam Makhmudov was convicted of murdering Politkovskaya in cooperation with his brothers and uncle.

Anna Politkovskaya was unfailing in her criticism of Vladimir Putin, and had researched several stories that accused him and the Federal Security Service (FSB) of orchestrating the Second Chechen War in order to bring Putin into the presidency.

According to the official account, the Second Chechen War began after a series of apartment bombings in 1999 carried out by Chechen terrorists. But even at the time, not everyone believed that.

Anna Politkovskaya was one of the skeptical, and she had spent time attempting an independent investigation into the theory that they were in fact coordinated by state security forces.

The attacks and Putin’s subsequent invasion of Chechnya, dramatically increased his popularity and helped him win the presidency a few months later. And according to Russian oligarch Boris Berezovsky, Putin once promised she would “take one in the head” if she ever spoke about the bombings.

Then, in October, 2002, Chechen terrorists seized nearly 1,000 hostages in Moscow’s Dubrovka Theater. Russian police turned to Politkovskaya for help. Her name was known throughout Chechnya, and it was assumed that she could reason with the hostage-takers.

Instead, special forces troops released an unknown chemical agent into the theater to incapacitate the attackers and stormed the building. After several hours of fighting, the terrorists were all killed or captured, and the gas had proven lethal to over 200 civilian hostages.

In the years after the attacks, Politkovskaya worked tirelessly to investigate what had happened at the theater. Eventually she claimed to have evidence that the two Chechen separatists who planned it only did so with the urging and coordinated involvement of the FSB. And even though 200 civilians had been killed, again, Putin’s popularity soared.

But it wasn’t just Putin who considered Politkovskaya an embarrassing and potentially dangerous enemy. In an interview with Ramzan Kadyrov in 2004, his bodyguard even told her “You should have been shot back in Moscow, on the street.”

The Unresolved Death Of Anna Politkovskaya 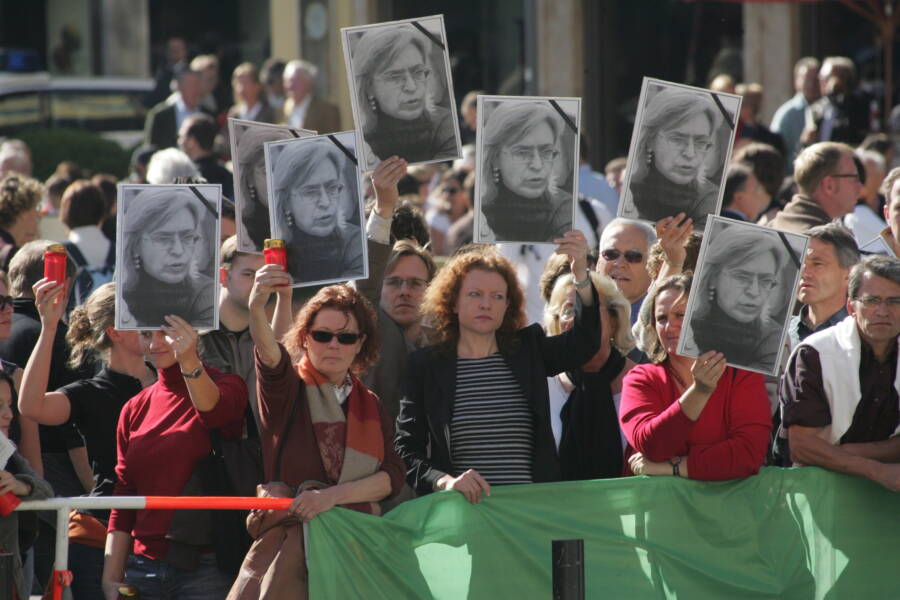 Anna Politkovskaya often brushed aside the danger to her, saying “one can even get killed for giving me information. I am not the only one in danger.”

But then, on the evening of Oct. 7, 2006, a neighbor found her body in the elevator of her Moscow apartment building. That day, she’d planned to file a new story about the Kadyrovtsy’s torture methods.

There was no doubt that it had been a contract killing. A Makarov pistol was left next to her on the floor, and she’d been shot twice in the chest and once in the head – a technique known as kontrolnyi vystrel, or “control shot.”

News of Politkovskaya’s death traveled rapidly across the world as national leaders and press freedom advocates unanimously condemned the execution. Thousands protested and held vigils outside of her apartment and Russian embassies across Europe. Under pressure to bring her killers to justice, Putin announced an investigation into the killing.

Numerous suspects were arrested and interrogated and acquitted until 2014, when Chechens Lom-Ali Gaitukayev and his nephew Rustam Makhmudov were convicted for the murder. Yet the conviction offered little comfort or clarity since one key question remains unanswered: who ordered the killing?

That it had occurred close to both Putin and Kadyrov’s birthdays raised suspicions that the assassin had killed her “as an unasked-for present.” Others claimed that Kadyrov’s enemies had murdered Politkovskaya to embarrass him, since he would be a natural suspect.

But without a clear answer, Anna Politkovskaya’s assassination effectively muzzled the press in Russia. No journalist would risk speaking out too often or too openly against Putin or Kadyrov. And with no one to hold them accountable, the stranglehold Putin and his protégé hold on Russia has only grown tighter in the years since their most beloved critic was brutally silenced.

Now that you know the fate of Anna Politkovskaya, learn more about Vladimir Putin, Russia’s autocratic ex-KGB president. Next, see the collapse of the Soviet Union in these rare images.