Hunters Just Discovered 8,000-Year-Old Native American Artifacts In The Belly Of An Alligator In Mississippi

The 750-pound alligator was killed in Vicksburg, Mississippi in September and held two prehistoric Indigenous artifacts in its stomach — one of which continues to baffle experts. 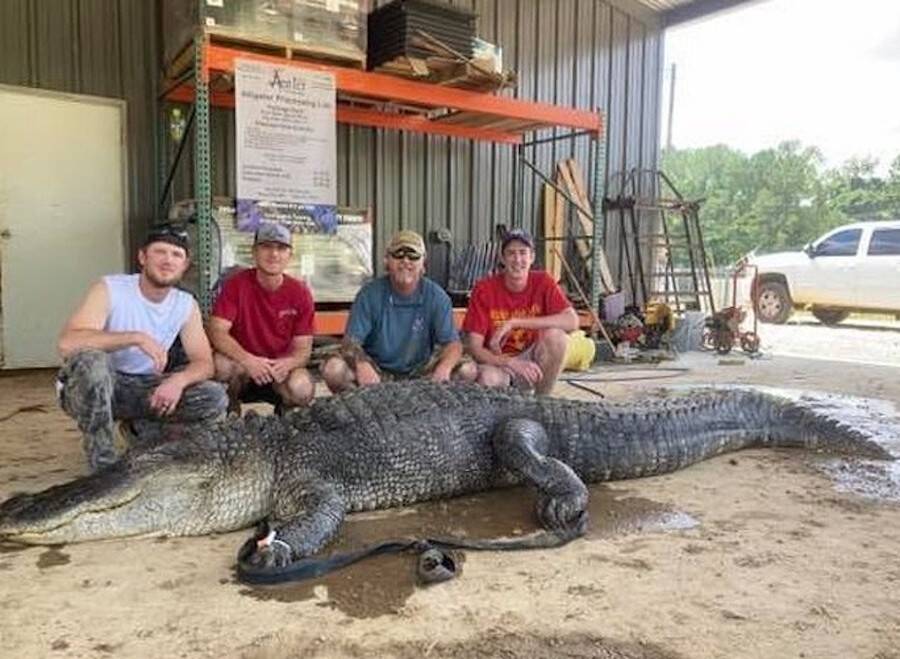 John Hamilton/FacebookThe animal was 13.5 feet long and was captured on Sept. 2 by John Hamilton.

This year, Shane Smith, owner of Red Antler Processing in Yazoo City, Mississippi, made it a point to look inside the stomachs of alligators brought to him for butchering. He’d seen other butchers share stories of strange finds within alligator bellies and wanted to see for himself. Then, he made the discovery of a lifetime.

In September, Smith cut open the stomach of a 750-pound alligator and found prehistoric Indigenous American relics inside.

According to CNN, Smith carefully collected these objects and photographed them for a Facebook post that caught the attention of James Starnes. As director of Surface Geology and Surface Mapping for Mississippi’s Department of Environmental Quality, he quickly identified the items as hunting tools that could date as far back as 6000 B.C.

One of them was a tear-shaped and metallic “plummet.” While these objects look like fishing weights, their specific use remains debated among scholars. This plummet, Starnes said, dates to around 2000 B.C.

The other object resembled a broken arrowhead. But it is, in fact, an “atlatl dart point,” a prehistoric spear- or dart-like item with a sharpened stone tip at the base for use in prehistoric hunts and dates to around 6000 B.C. For Starnes, their origin was clear.

“We’ve had Native American inhabitants in North America, especially in Mississippi, going back probably 12,000-plus years,” he said. “This technology was the technology that they would have brought with them. These things were made before the advent of bows and arrows in North America.”

That confirmation left Smith with only one question: how did these things wind up in an alligator stomach? 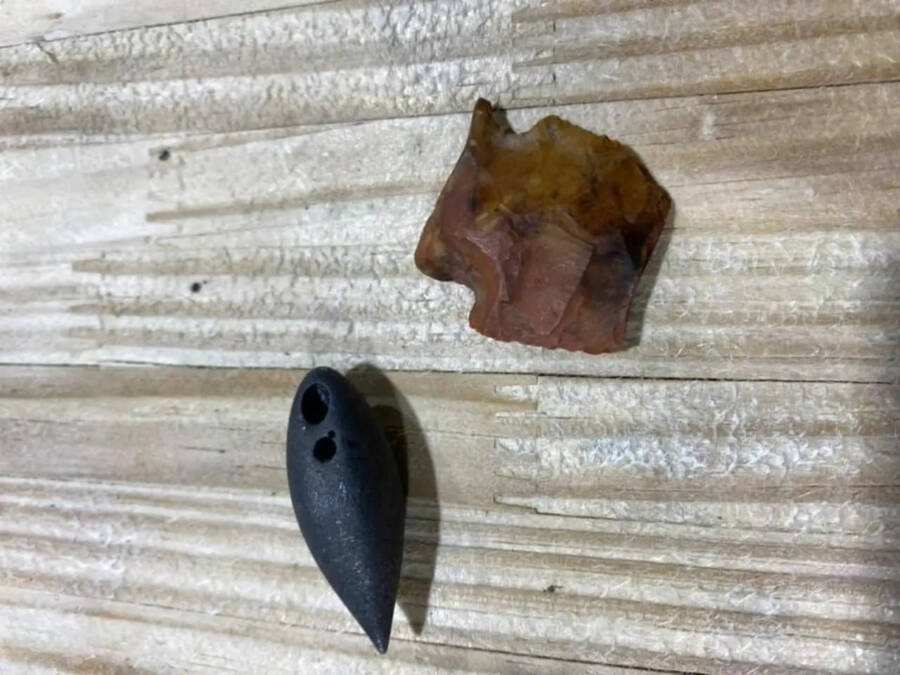 Red Antler Processing/FacebookIt’s clear that one of the tools (right) was used to hunt, while the plummet (left) remains mysterious.

Smith’s journey began when he read an article in spring about a wild game processor in South Carolina who found dog tags in an alligator’s stomach. Smith decided to check all of the larger specimens his company received from then on — and soon found two items among bones, hair, feathers, and stones.

After wading through the 13.5-foot-long animal’s stomach, Smith was confident that one of the items was an ancient arrowhead. According to The Clarion Ledger, he hesitated to put pictures online without confirmation until he realized that “this has probably never happened before” and was “too cool not to post on Facebook.”

“Everybody was standing around like I was opening a Christmas present,” he said. “We kind of put it all in a bin. I looked over and saw a rock with a different tint to it. It was the arrowhead. It was just disbelief. There’s just no way he had an arrowhead.”

“You naturally think that, ‘Oh, my gosh, this alligator, either ate an Indian or ate an animal that the Indian shot.’ But, you know, obviously the alligator is not thousands of years old,” he said.

“We joked about it and said I’m probably the only person on Earth to pull an arrowhead out of an alligator’s stomach.” 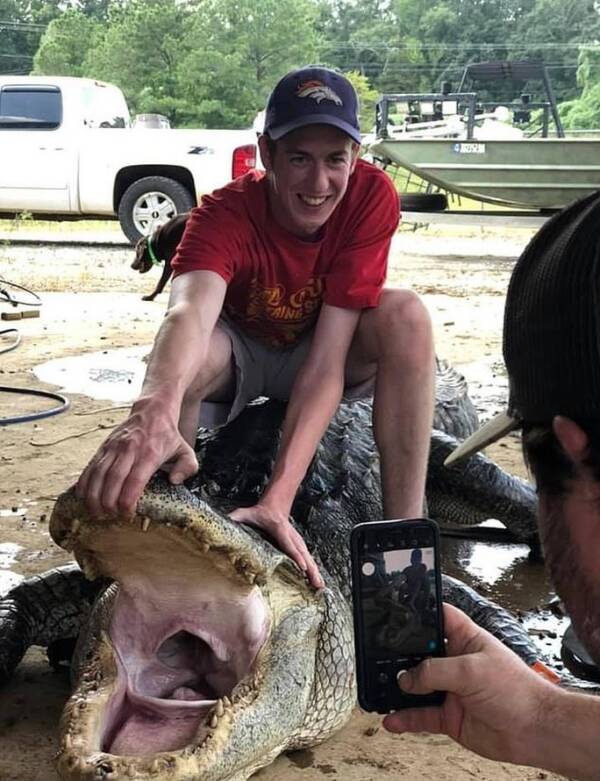 John Hamilton/FacebookThe alligator weighed 750 pounds and was between 80 and 100 years old.

Starnes was quick to point out that the object wasn’t actually an arrowhead. Atlatl dart points were used to launch spears and are comprised of several components. With a pointed stone at the base and a piece of wood with a cup on the other end, the tool employed lever technology to increase the projectile’s velocity.

“That’s an atlatl dart point,” said Starnes. “People think all heads are arrowheads, but those would be the little bitty points.”

As for the enigmatic plummet, Starnes was able to date that item to the Late Archaic Period at about 1700 B.C. While Smith initially thought it was a fishing weight due to the appearance of two holes in it, they don’t go all the way through the object — rendering its use a mystery. It also isn’t made of material native to Mississippi.

Starnes explained that its hematite material, an iron oxide alloy traded between early Indigenous groups, might have come from as far aways the Great Lakes. He described the rock as “exotic,” and posited that using such an “ornate” type of material for something as rudimentary as fishing appeared unlikely. 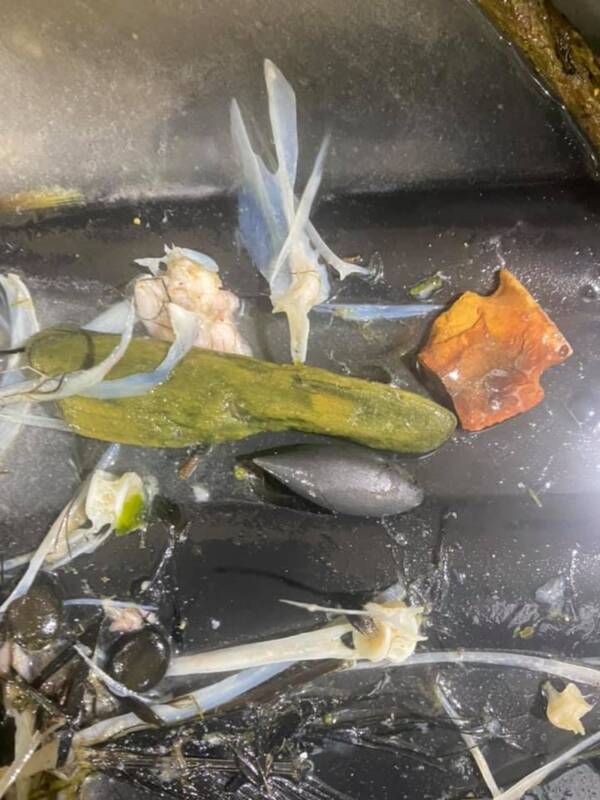 “The plummets, we really have no idea what they were used for,” he said. “These things had some significance, but we have no idea. We can only guess.”

Ultimately, how Indigenous Americans used the plummets is a greater mystery than how one ended up in the belly of an alligator. These animals hoover up anything from rocks as big as a silver dollar to help with digestion. And because their bodies can’t process stones, they remain in the alligators’ stomachs.

“Since this area was so heavily populated over such a long period of time, artifacts show up in some very unusual places,” said Starnes.

“You could imagine that one of these sites having this much stone material is just eroding out of the bank, pretty easy pickings for an alligator, especially looking for her, you know, just something to ingest. Alligators will pretty much eat anything.”

After reading about the 6,000-year-old artifacts found in the stomach of an alligator, learn about police finding an alligator named “El Chompo” during a drug bust. Then, read about the thousands of Indigenous children who died in Canadian institutions.