The Annabelle doll that stars in the eponymous franchise is based on a real-life Raggedy Ann said to have terrorized a pair of young nurses before killing a man.

She sits in a glass case bearing hand-carved inscriptions of the Lord’s Prayer, a complacent, stitched smile resting under her red yarn-dyed hair.

But beneath her case is a post-card-sized white sign which reads: “Warning, positively do not open.”

To the uninformed, she looks like any other oversized Raggedy Ann produced in the early 20th century, but the Annabelle doll is anything but.

She’s been blamed for demonic possession and at least two near-death experiences. Indeed, the fascination around the sinister Annabelle doll has inspired a multi-million-dollar franchise.

But just how much of her haunted tale is to be believed? Is Annabelle the doll really an inanimate vessel for a demonic spirit in search of a human host, or is she simply a child’s toy, used as a prop for a lifetime of wildly profitable ghost stories? 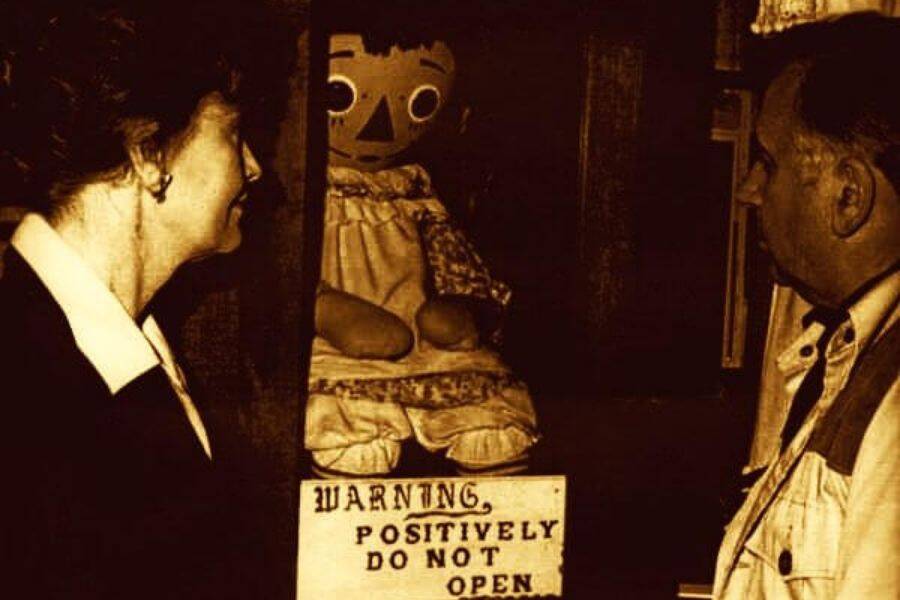 Warren Occult MuseumEd and Lorainne Warren look upon the Annabelle doll in her glass case.

The History Of The Real Annabelle Doll

Though she doesn’t share the same porcelain skin and lifelike features as her cinematic counterpart, the Annabelle doll that lives in Ed and Lorraine Warren‘s in-home occult museum is, if anything, made all the more creepy by her ordinariness.

If you were to ask Ed and Lorraine Warren (though you cant, as Ed died in 2006 and Lorraine died in early 2019) they would tell you that the stark warnings scrawled across Annabelle’s glass case are more than necessary.

According to the famed demonologist couple, the doll is responsible for two near-death experiences, one fatal accident, and a string of demonic activities spanning almost 30 years.

A scene involving Annabelle from the infamous horror franchise, The Conjuring.

The first of these infamous hauntings can allegedly be traced back to 1968 when Annabelle was brand new. The story was told to the Warrens by two young women and was retold for years after by the Warrens.

As the story goes, the Annabelle doll had been a gift to a young nurse named Donna (or Deirdre, depending on the source) from her mother for her 28th birthday. Donna, apparently thrilled with the gift, brought it back to her apartment that she shared with another young nurse named Angie.

At first, the doll was an adorable accessory, sitting on a sofa in the living room and greeting visitors with her colorful facade. But before long, the two women began to notice that Annabelle seemed to move about the room of her own accord.

Donna would leave her on the living room sofa before leaving for work only to come home in the afternoon and find her in the bedroom, with the door shut.

The roommates would also often find notes left throughout the home reading “Help Me.” According to the women, the notes were written on parchment paper, which the girls did not keep in the home. 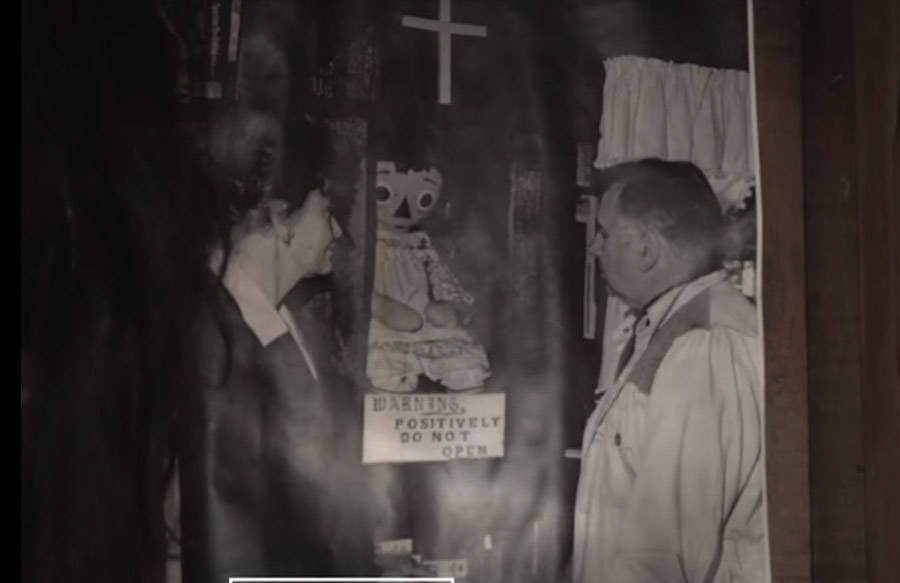 YouTubeThe Annabelle doll in her case at the Warrens’ Occult Museum.

Furthermore, Angie’s boyfriend, known only as Lou, was in the apartment one afternoon while Donna was out, and heard rustling in her room as if someone had broken in. Upon inspection, he found no sign of forced entry but found the Annabelle doll lying facedown on the ground.

Suddenly, he felt a searing pain on his chest and looked down to find bloody claw marks running across it. Two days later, they had vanished without a trace.

Following Lou’s traumatic experience, the women invited a medium over to help solve their seemingly spiritual problem. The medium held a seance and told the women that the doll was inhabited by the spirit of a deceased child named Annabelle, whose body had been found years earlier on the site where their apartment building had been built.

The medium claimed that the spirit was benevolent, and simply wanted to be loved and cared for. The two young nurses reportedly felt bad for the spirit and consented to allow her to take up permanent residence in the doll. 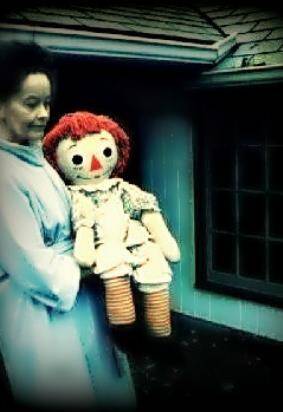 Flickr CommonsLorainne Warren with Annabelle shortly after the Warrens took possession of the possessed doll.

As far as the Warrens were concerned, that was where the young nurses’ trouble started. The Warrens believed that there was actually a demonic force in search of a human host within Annabelle, and not a benevolent force. The Warrens’ account of the case states:

Spirits do not Possess inanimate objects like houses or toys, they possess people. An inhuman spirit can attach itself to a place or object and this is what occurred in the Annabelle case. This spirit manipulated the doll and created the illusion of it being alive in order to get recognition. Truly, the spirit was not looking to stay attached to the doll, it was looking to posses a human host.

Be that as it may, the young nurses were yet unaware of the purported demon’s intentions. In an attempt to rid their home of the Annabelle doll’s spirit they called on an Episcopal priest, known as Father Hegan. Hegan contacted his superior, a Father Cooke, who alerted the Warrens.

Immediately, the Warrens alleged to know what was happening. They noted all “signs” of demonic possession, including teleportation (the doll moving on its own), materialization (the parchment paper notes), and the “mark of the beast” (Lou’s clawed chest).

The Warren’s subsequently ordered an exorcism of the apartment to be performed by Father Cooke. Then, they took Annabelle out of the apartment and to her final resting place in their Occult Museum in the hopes that her demonic reign would finally end.

They would later claim they were wrong.

Other Hauntings By Annabelle The Doll 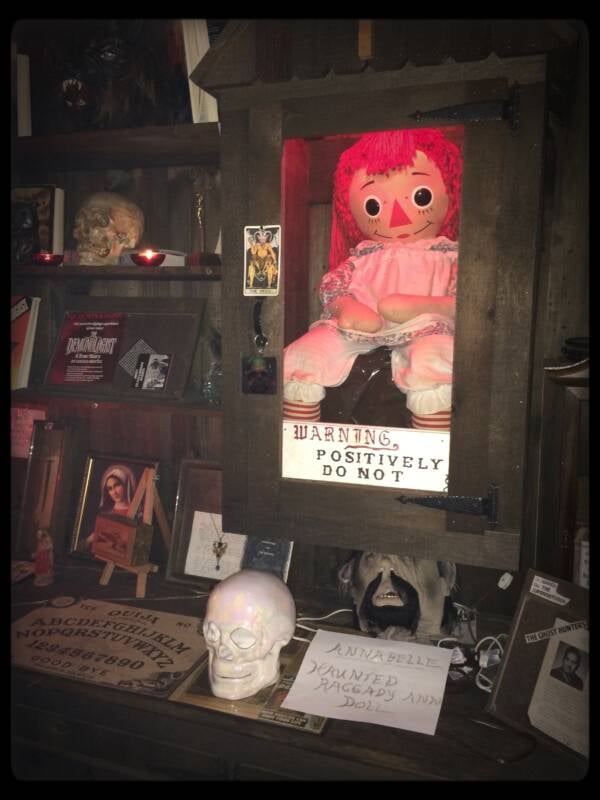 Following her removal from Donna and Angie’s apartment, the Warrens noted several other paranormal experiences involving the doll – the first just minutes after they took possession of her.

After the exorcism of the nurses’ apartment, the Warrens buckled Annabelle into the backseat of their car and vowed not to take the highway in case she still had some kind of power over them. However, even the safer backroads proved too risky for the couple.

Upon arriving home, Ed and Lorraine placed the doll in Ed’s study. There, they reported that the doll levitated and moved about the house. Even when placed in the locked office in an outer building, the Warrens claimed that she would turn up later inside the house.

Finally, the Warrens decided to lock Annabelle up for good.

The Warrens had a specially-made glass and wood case constructed, upon which they inscribed the Lord’s Prayer and Michael’s Prayer. For the rest of his life, Ed would periodically say a binding prayer over the case, ensuring that the sinister spirit – and the doll – remained good and trapped.

Since being locked up, Annabelle the doll hasn’t moved again though it is alleged that her spirit has found ways to reach out to the earthly plane.

Once, a priest who was visiting the Warrens museum picked up Annabelle and discounted her demonic abilities. Ed warned the priest about mocking Annabelle’s demons, but the young priest laughed him off. On his way home, the priest was involved in a near-fatal crash that totaled his new car.

He claimed to have seen Annabelle in his rearview mirror just before the accident.

Years later, another visitor rapped on the glass of the Annabelle doll’s case and laughed at how silly people were to believe in her. On his way home, he reportedly lost control of his motorcycle and crashed headlong into a tree. He was killed instantly and his girlfriend just barely survived.

She claimed that at the time of the accident, the couple had been laughing about the Annabelle doll.

Over the years, the Warren’s continued to recount these tales as proof of Annabelle the doll’s horrific powers, though none of these stories could be corroborated.

A woman in the Annabelle movie encounters the haunted doll’s demon.

The names of the young priest and the motorcyclists were never divulged. Neither Donna nor Angie, the two nurses who were Annabelle’s first victims, ever came forward with their story. Neither Father Cooke nor Father Hegan appeared to have mentioned their exorcisms of her ever again.

It would appear that all we have is the Warrens’ word that any of this even took place.

Whether or not any of these hauntings took place, the tales left behind were all director/producer James Wan needed to pull together a long-lasting and lucrative horror universe.

Beginning in 2014, Wan wrote the story of Annabelle, a child-sized haunted porcelain doll with lifelike features and a penchant for violence, using the real-life Annabelle doll as inspiration.

Of course, there are several distinctions between the Warrens’ doll and the cinematic creation.

The most obvious difference is the doll itself. While the real Annabelle is clearly a child’s toy with its exaggerated features and plush body parts, the movie version of Annabelle is ten times creepier. Inspired by vintage handmade dolls of porcelain, real braided hair, and glistening glass eyes, it’s clear why the artistic license was taken. 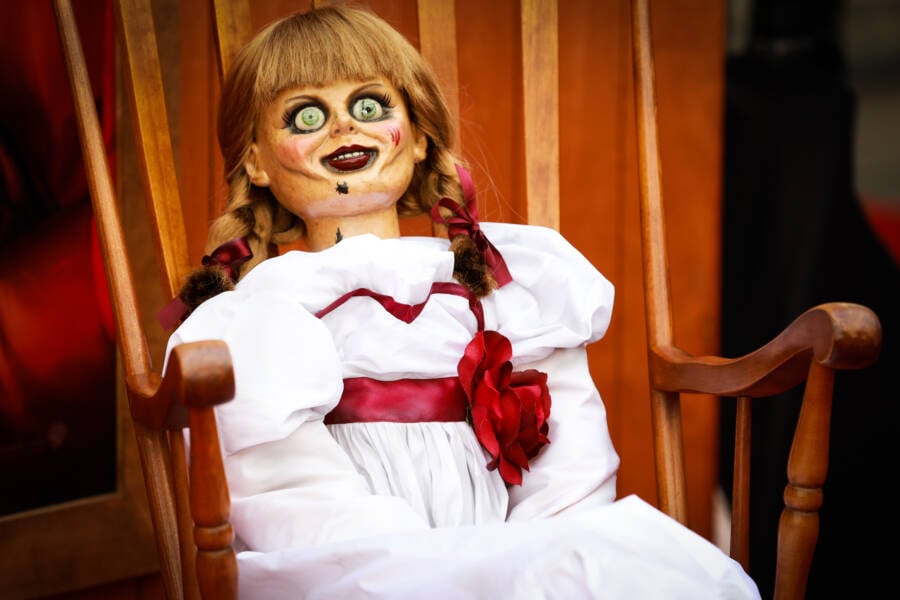 Along with her physical features, Annabelle’s antics were also amped up for shock value in the movies. Rather than terrorizing a pair of roommates and one boyfriend, movie Annabelle moves from home to home, attacking families, possessing satanic cults, killing children, posing as a nun, and causing chaos in the Warrens’ own home.

Despite the fact that the real Annabelle only has one alleged murder under her belt, Wan has invented enough destruction for three movies.

Though Ed and Lorraine Warren have both died, their legacy has been carried on by their daughter Judy and her husband Tony Spera. Until his death in 2006, Ed Warren considered Spera his demonology protege and entrusted him with continuing his work which included caring for his occult artifacts.

Those artifacts include the Annabelle doll and her protective case, a task Spera doesn’t take lightly. Echoing the warnings of his predecessors, Spera cautions visitors to the Warrens in-home Occult Museum of Annabelle’s powers.

A visit with Annabelle at the Warren’s occult museum.

“Is it dangerous?” Spera reported on the doll. “Yes. Is it the most dangerous object in this museum? Yes.”

If we’ve got you believing the stories of Annabelle the doll in spite of your common sense, allow us to remind you of the Warrens’ sordid history with the truth.

Though they became practically household names for their involvement in the Amityville Horror case and those that inspired The Conjuring, their work has been almost entirely debunked. 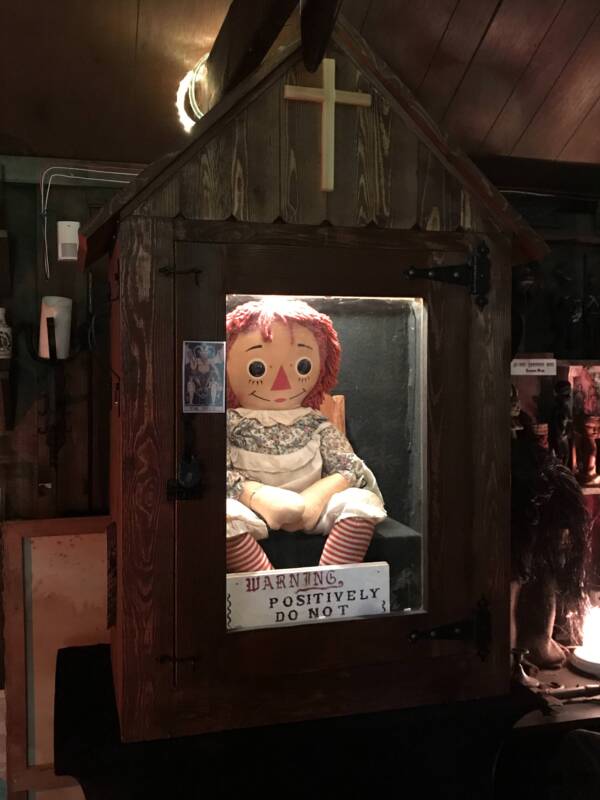 An investigation by the New England Skeptical Society proved that the artifacts in the Warren Occult Museum were mostly fraudulent, citing doctored photos and exaggerated storytelling.

To those who still doubt the Annabelle doll’s powers, Tony Spera leaves a nugget of wisdom that is hard to argue with. In his demonic defense, he likens disturbing Annabelle to playing Russian Roulette; there might be one bullet in the chamber. Do you pull the trigger? Or do you just put the gun down and leave the risk alone?

In short, Annabelle and her supposed possession might simply be the work of some highly imaginative storytelling… but do you really want to risk it?