The Death Of Anne Boleyn, The First Queen Of England To Be Executed

King Henry VIII lusted after Anne Boleyn for nine years before divorcing his first wife to marry her — then had her executed three years later.

On May 19, 1536, Anne Boleyn mounted the scaffold to face her executioner. The former lady’s maid had caught the eye of King Henry VIII over a decade earlier, and after years of holding off the king’s advances, Boleyn had finally agreed to a secret wedding.

Her decision to become his wife had shaken England and changed the course of English history.

When Henry VIII cast aside his first wife Catherine of Aragon to marry Anne Boleyn, he caused a permanent break between England and the Catholic Church. And when his marriage to Boleyn failed to produce a male heir, the king turned against his new wife and accused her of treason.

Was Queen Anne Boleyn driven to death by her own ambition? Or was she yet another victim to a king who would leave behind a string of failed marriages, imprisoned, and decapitated wives? 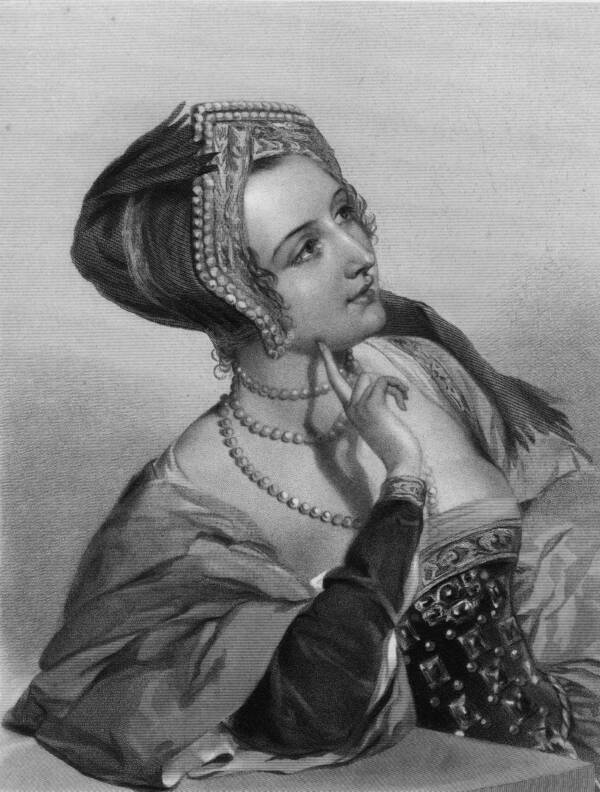 Hulton Archive/Getty ImagesAt first, it seemed Boleyn’s sister would be the one to woo the king.

Born the daughter of English diplomat Thomas Boleyn around 1500, Anne Boleyn grew up surrounded by luxury. As a teenager, she joined her sister Mary Boleyn as a lady-in-waiting for King Henry VIII’s sister, Mary Tudor, at the French court.

The Boleyn sisters made quite an impression in France where King Francis claimed he’d “ridden” Mary Boleyn. According to one of the pope’s representatives in France, Mary Boleyn consequently became known as “a very great infamous whore.”

Anne Boleyn’s reputation was nearly the opposite of her philandering sister’s. Observers at the French court praised Anne Boleyn’s “dignity and poise.” French poet Lancelot de Carle said Anne “became so graceful that you would never have taken her for an Englishwoman, but for a Frenchwoman born.”

In 1520, Boleyn’s father ordered his daughters to return home. Mary Boleyn wed William Carey, but her marriage soon became cover for an affair with King Henry VIII. The illicit relationship brought wealth to the Boleyn family as Thomas Boleyn became a viscount and the king named a ship after Mary.

But as early as 1523, Anne Boleyn caught Henry VIII’s attention instead. As the courtier George Cavendish noted, the king was “casting amorous eyes” at his mistress’s sister.

In 1526, Boleyn was appointed a maid of honor to Catherine of Aragon. The position only brought her closer to the king. 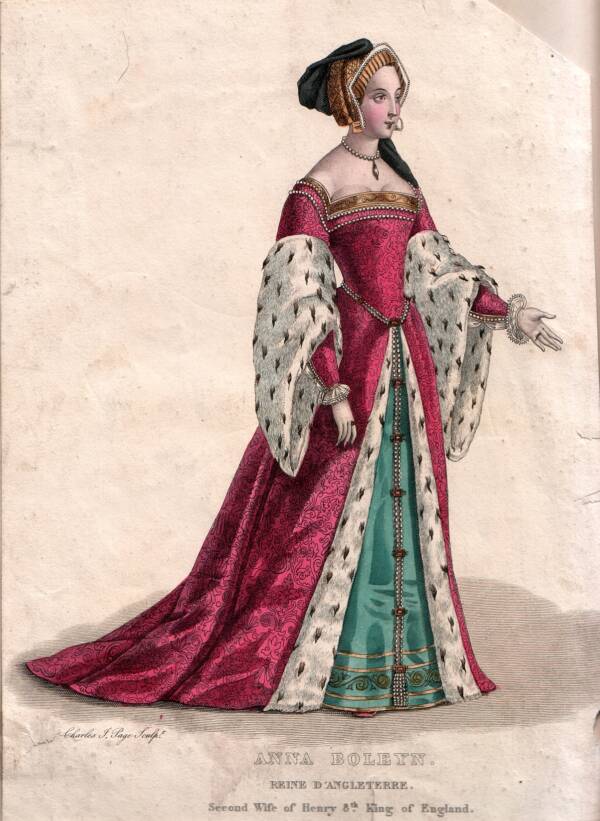 Charles I. Page/Collection G. & C. FrankeQueen Anne Boleyn was known for her elegance and wit, neither of which could prevent her execution, however.

King Henry VIII carried on multiple affairs while married to Catherine of Aragon — but from the beginning his infatuation with Anne Boleyn was different.

In 1526, the king wrote, “Seeing I cannot be present in person with you, I send you the nearest thing to that possible, that is, my picture set in bracelets… wishing myself in their place.”

He sent less traditional gifts as well. “I sent you by this bearer a buck killed late last night by my hand,” King Henry VIII wrote. “Hoping, when you eat it, you will think of the hunter.”

What made Anne Boleyn different? For one, she rebuked the king’s advances. As historian Hilary Mantel explained, “She would not go to bed with him, even though he wrote her love letters in his own effortful hand.”

To a ruler not used to hearing “no,” Boleyn’s refusal drove the king to madness. 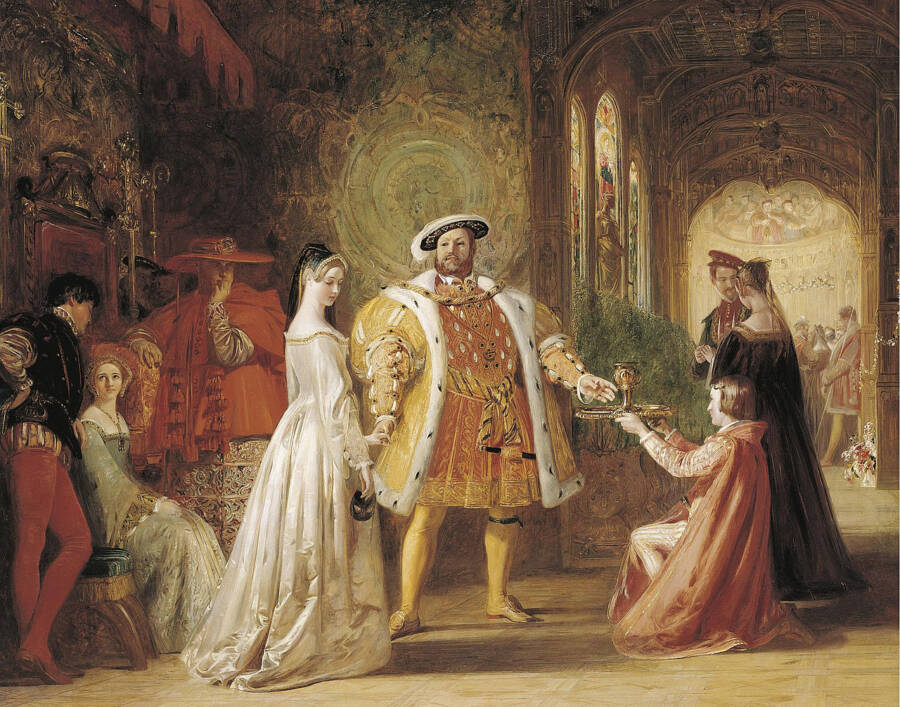 By 1527, the king was looking for a way out of his marriage to Catherine of Aragon and into Anne Boleyn’s bed. That year, he wrote to Pope Clement VII asking for an annulment. His marriage was invalid, King Henry VIII argued, because Catherine had previously married his brother Arthur.

Yet to the king’s irritation, the pope saw through the pretext and ordered him not to marry Anne Boleyn.

The Divorce That Divided England

Anne Boleyn refused the king’s physical advances until 1532 — nearly a decade after they had begun. That year, King Henry VIII approached Thomas Cromwell, a lawyer and his loyal Chief Minister, to help him find a way to secretly wed Boleyn.

The couple traveled to Calais, where they finally consummated their relationship. Once they stepped back on English soil, they married in a secret ceremony. 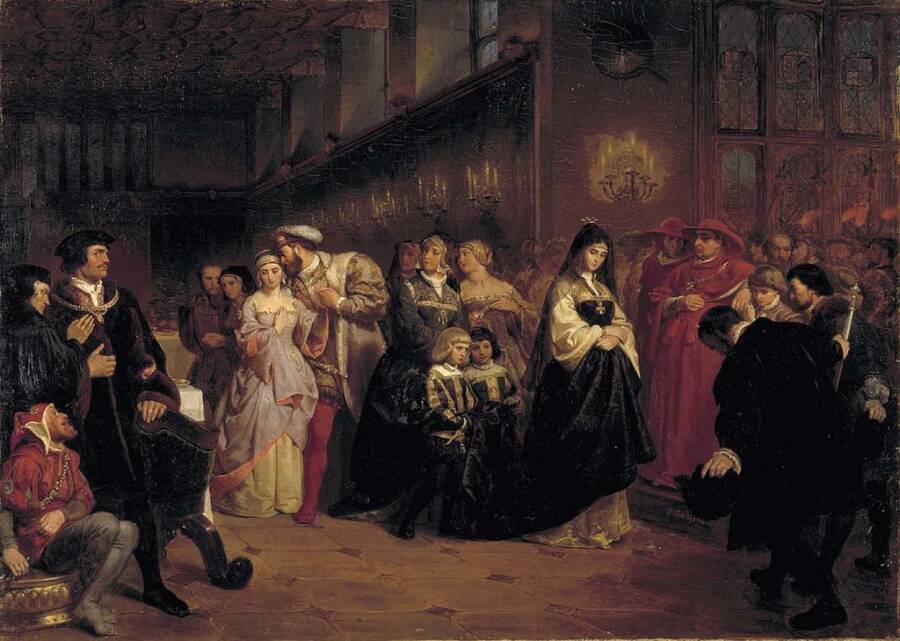 Desperate for a legitimate male heir, King Henry publicly declared Anne Boleyn the Queen of England in 1533 when she announced that she was pregnant.

King Charles V of Spain threatened to invade England if their marriage took place but King Henry VIII ignored these threats and held a public ceremony on Jan. 25, 1533. Nonetheless, the Catholic Church ignored his divorce and thus considered his union with Anne Boleyn bigamous.

Still, on June 1, 1533 Anne Boleyn was crowned Queen of England at Westminster Abbey. She was five months pregnant at her coronation.

Even before she gave birth, the king prepared proclamations declaring England would have a new prince. And so when Anne Boleyn gave birth to a daughter — the future Queen Elizabeth I — the king’s scribes had to hastily amend the proclamations.

Supporters of Catherine of Aragon took the child’s birth as proof that God was punishing King Henry VIII for casting her aside. But the king refused to let the child’s sex deflate him. “If it is a girl this time, boys will follow,” he confidently declared. 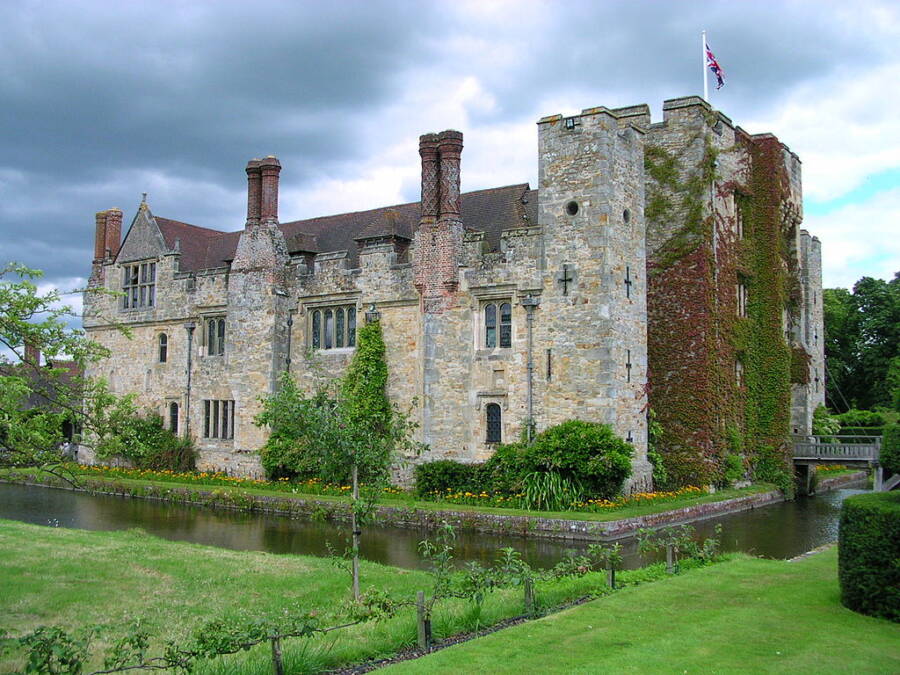 Charlesdrakew/Wikimedia CommonsHever Castle, where Anne Boleyn grew up before traveling to France.

Anne Boleyn spent just under three years as England’s queen. During that time, she was criticized by loyalists of Catherine of Aragon and supporters of the Spanish alliance.

When the king tried to show his new queen their kingdom, he was forced to turn back. According to Eustace Chapuys, the ambassador from Spain, “The people on the road so earnestly requested him to recall the queen, his wife, and the women especially so insulted the royal mistress, hooting and hissing on her passage.”

Then, in early 1534, Pope Clement VII officially ruled the marriage with Boleyn invalid. In response, the king severed all ties with the Catholic Church in a decision that sent England into a tailspin. Parliament declared King Henry VIII the new head of the Church of England in place of the pope.

The relationship between King Henry VIII and Anne Boleyn soured almost immediately after the birth of their second child that same year, another daughter, who would not live past infancy.

King Henry VIII worried that this was proof of God’s disfavor with them. After all, his detractors both in England and abroad insisted that God would punish him for marrying Boleyn.

In early 1536, a pregnant Anne Boleyn walked in on Jane Seymour, one of her lady’s maids, sitting on the king’s lap. Boleyn gave birth to a stillborn boy not long after. King Henry saw this as a divine punishment for his sins.

The king turned on Boleyn. He demanded that Thomas Cromwell, his devoted minion, now find a pretext for him to divorce her. Cromwell’s solution was to claim that the stillborn child was the product of adultery and he rounded up five men to accuse of having had illicit relationships with the queen — including her own brother, George Boleyn.

The Trial And Death Of Anne Boleyn 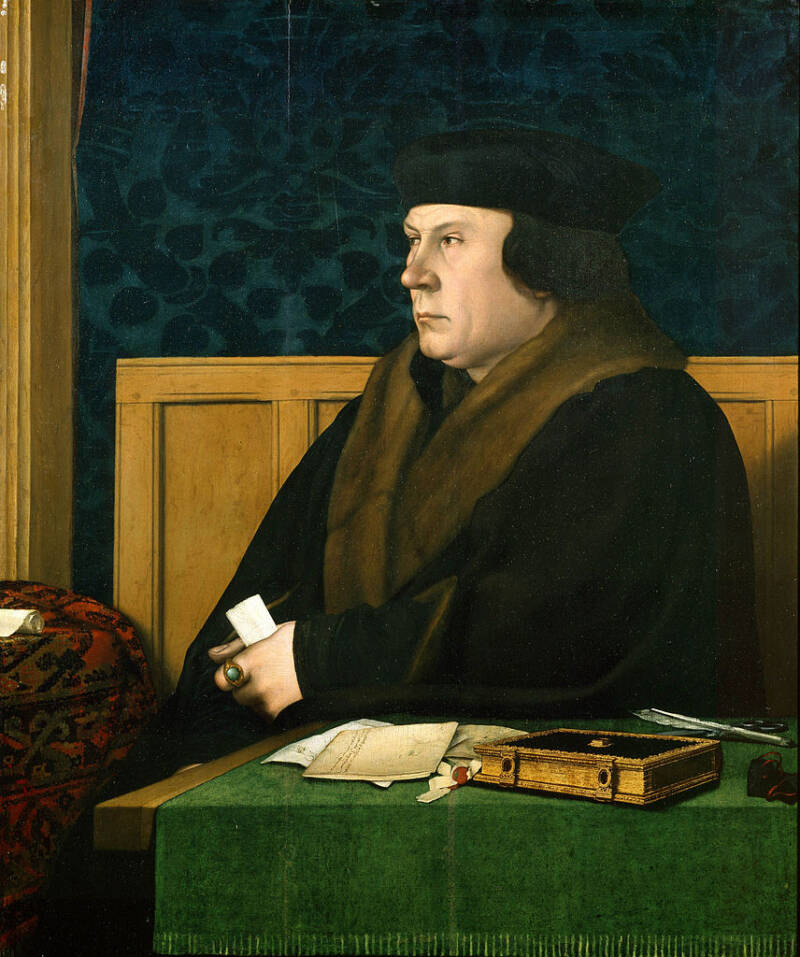 Hans Holbein/Frick CollectionThomas Cromwell cleared a path for King Henry VIII to marry Anne Boleyn – and then orchestrated her arrest.

On May 2, 1536, the king’s men arrested Anne Boleyn for treason and adultery. The disgraced queen entered the Tower of London through the Traitors’ Gate.

During a hastily arranged trial, Boleyn was charged with conspiracy to murder her husband, poisoning Catherine of Aragon, and plotting to kill Mary Tudor, the king’s first daughter.

The trial was filled with salacious details of her supposed affairs. She was even accused of having had an incestuous relationship with her brother, George Boleyn.

But the outcome of Anne Boleyn’s trial was certain even before it began as not only had her “conspirators” confessed, some under torture, but the king clearly wanted her out of the picture. 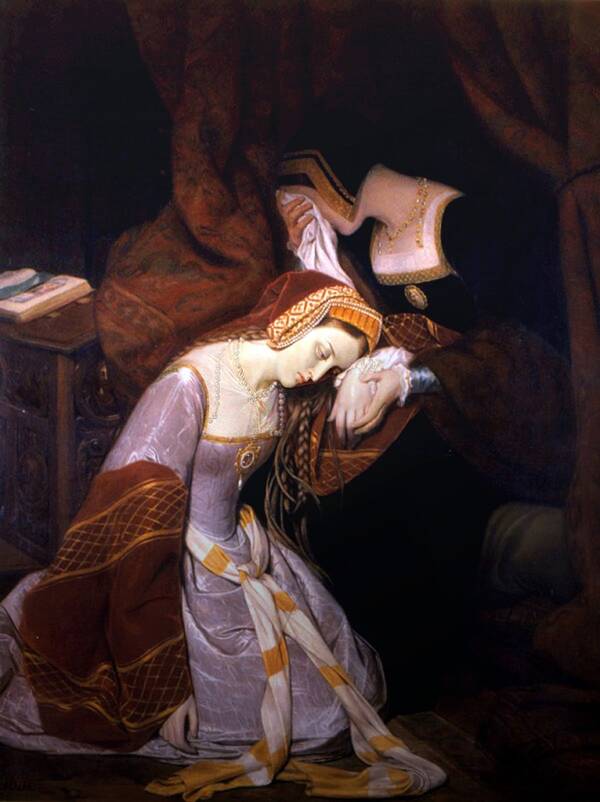 Édouard Cibot/Musée RolinSeveral weeks before Anne Boleyn’s execution, she was kept in the Tower of London.

The jury heard the charges against Queen Anne Boleyn and returned a guilty verdict almost immediately. She would have to wait in the Tower of London while her executioners built a new scaffold for her beheading.

The execution of Anne Boleyn had been scheduled for May 18, 1536, but Cromwell pushed back the date to make sure foreign diplomats didn’t witness the sentence. King Henry VIII had already destroyed his reputation abroad by divorcing Catherine of Spain and marrying Boleyn, and so news of Anne Boleyn’s execution may only further alienate the Crown from the rest of Europe.

On May 19, 1536, Anne Boleyn dressed herself in a crimson gown trimmed with royal ermine and walked to her execution. When she mounted the scaffold, Queen Anne faced a French executioner, who King Henry VIII paid £24 to behead her.

Before the executioner carried out the sentence, Boleyn spoke her final words:

“I have not come here to preach a sermon. I have come here to die. I pray God save the King and send him long to reign over you, for a gentler nor a more merciful prince was there never, and to me he was ever a good, a gentle, and sovereign lord.”

With a single stroke, the executioner beheaded Anne Boleyn. She was the first woman crowned queen of England to be executed.

Was The Mistress-Turned-Monarch A Villain? Or A Victim? 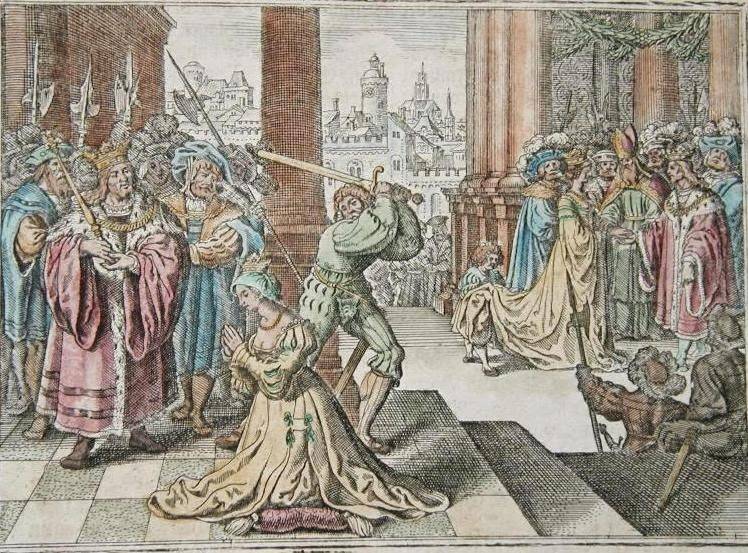 Unknown/Wikimedia CommonsAs a concession to Boleyn, the king hired a French swordsman to carry out her execution instead of the usual English axeman.

For centuries, critics have described Boleyn as a “foolish and bad woman;” “incredibly vain, ambitious, unscrupulous;” obsessed with “satisfying her carnal appetite,” and according to historian Susan Bordo, an “ambitious, scheming slut.”

But was Anne Boleyn truly a villain — or was she a victim of petulant king? For years, Boleyn walked a dangerous line with England’s king. If she refused to submit to his advances she could anger him, but if she accepted many might call her what they called her sister, a whore. She had to find a way to delicately decline his advances while not rejecting him outright.

After nine years of this tense game, Boleyn became queen. Never before had an English king divorced his wife to marry his mistress.

In the 16th century, this was a dangerous political game — and Boleyn nearly won it. But ultimately, like so many other courtiers, her very life was in the hands of a fickle ruler.

Anne Boleyn left behind a three-year-old daughter who grew up in the shadow of her execution, but Elizabeth Tudor would eventually become the Queen of England.

After this look and Queen Anne Boleyn and her grisly demise, read about the relationship between her sister Mary Boleyn and King Henry VIII. Then, learn more about the fate of King Henry’s other wives.