Anne Morrow Lindbergh, The Persevering Pilot And Author Who Charted Her Own Course

The wife of Charles Lindbergh, Anne Morrow Lindbergh accomplished incredible feats both in the air and on the page that all too often went overshadowed by both her husband’s success and the personal tragedies she endured.

Too often, history remembers women for their relationship to the men in their lives. Eleanor Roosevelt, wife of FDR. Jennie Jerome, mother of Winston Churchill. Such is the case of Anne Morrow Lindbergh, who most know as the wife of aviator Charles Lindbergh and the mother of the infamous Lindbergh baby.

But Anne Morrow Lindbergh was also a record-breaking pilot in her own right — and a New York Times best-selling author for 80 weeks in a row. This is her little-known story. 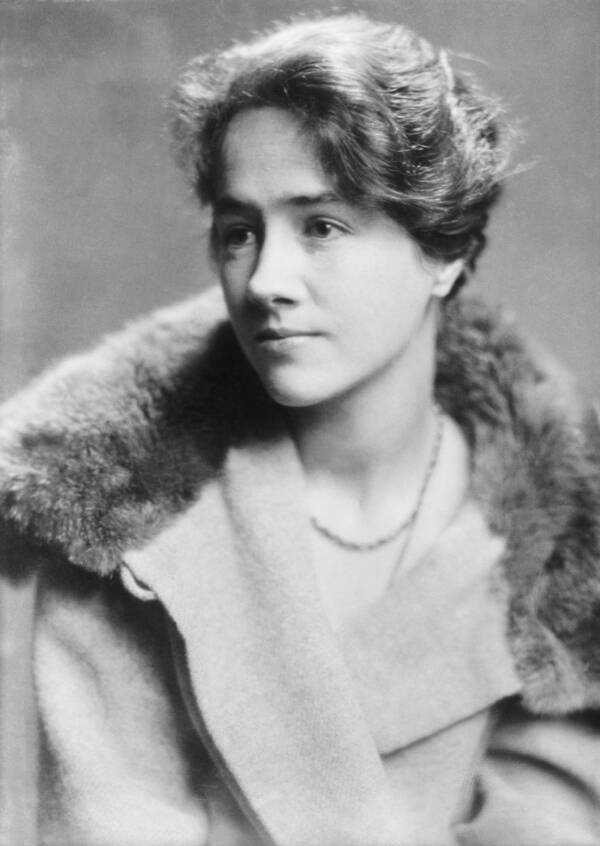 Bettmann/Getty ImagesAnne Morrow Lindbergh was known for her marriage and her tragedy, but she was a remarkable woman in her own right.

Born in 1906, a young Anne Morrow declared as a teenager that her goal in life was “to marry a hero.” From the outside, it must have looked like she got her wish when she married Charles Lindbergh, the world-famous aviator known for being the first to fly across the Atlantic.

Morrow first met Lindbergh in 1927 in Mexico, where her father was the United States Ambassador. Lindbergh was staying with Morrow’s family in preparation for a flight across Latin America when the 21-year-old graduate of Smith College first laid eyes on him.

Morrow reportedly was smitten and the pilot soon took her flying on their first date. “Suddenly I felt the real sensation of going up — a great lift, like a bird, like one’s dreams of flying — we soared in layers,” she wrote in her diary. “It was a complete and intense experience. I will not be happy till it happens again.”

The Lindberghs circled the globe in their plane, and Anne quickly proved herself to be an exceptional pilot. In 1930, the couple broke the transcontinental speed record by flying from Los Angeles to New York in just over 14 hours. At the time, Anne Lindbergh was seven months pregnant with the couple’s first child. 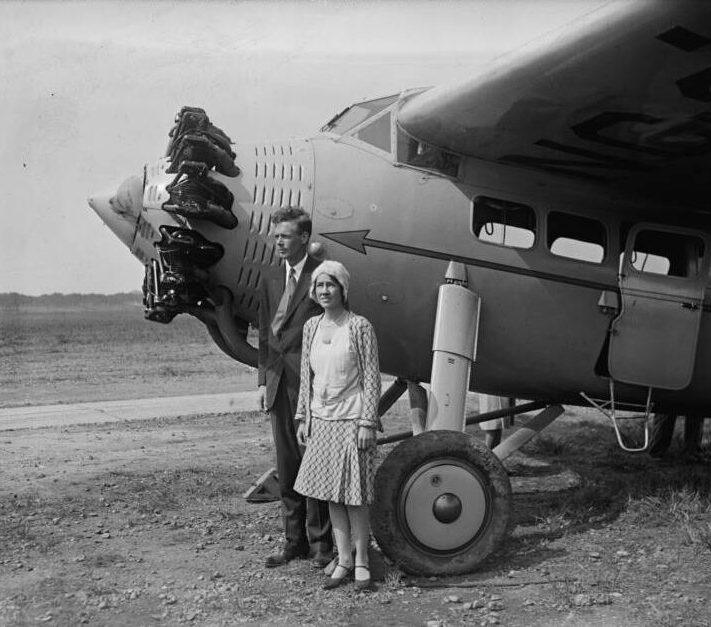 National Photo Company Collection/Library of CongressCharles and Anne Lindbergh became known as the “First Couple of the Skies.”

Crowds greeted the Lindberghs everywhere they landed. Soon, the press dubbed them the “First Couple of the Skies.”

The Tragic Mother Of The Lindbergh Baby

Someone had leaned a ladder against the Lindbergh house and broke into his room, leaving a ransom note that demanded $50,000 and which proved to be a hoax. “Everything is telescoped now into one moment, one of those eternal moments,” Lindbergh wrote, “the moment when I realized that the baby had been taken.” 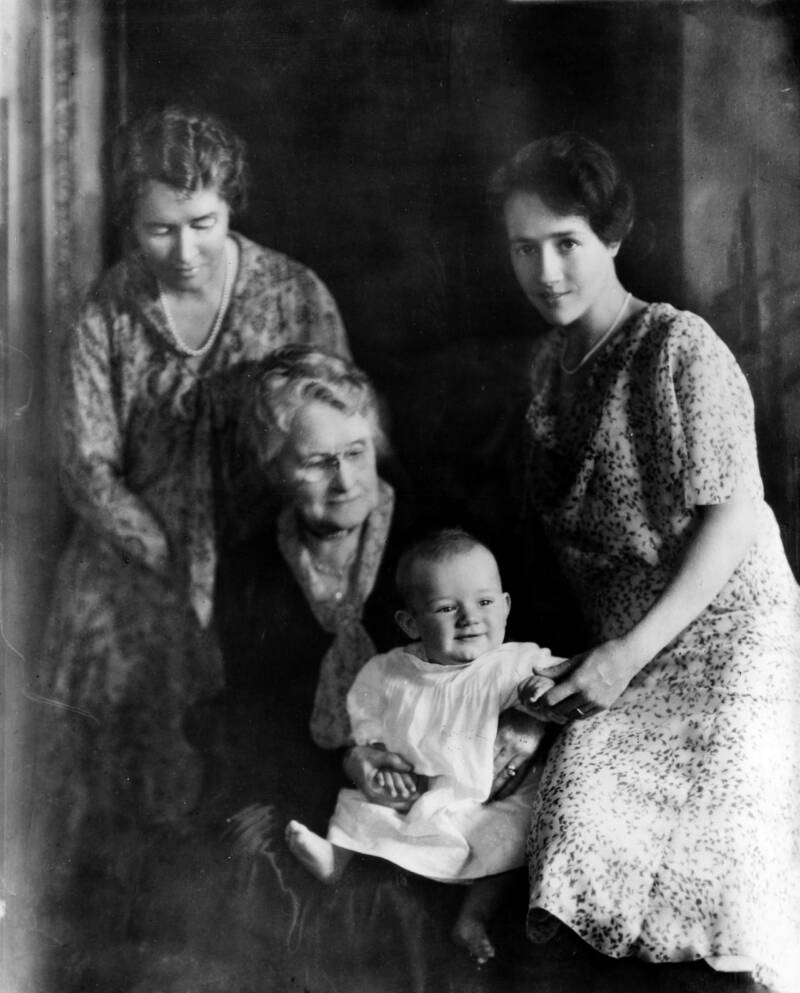 Library of CongressAnne Morrow Lindbergh posed with her mother, grandmother, and son in 1931.

Ten weeks after the investigation began, police found baby Charlie’s body half buried in the woods of Trenton, New Jersey.

For two years, the case went unsolved, and then police finally nabbed the kidnapper and murderer. Anne Morrow Lindbergh had to take the stand holding back tears. A year later, the convicted murderer went to the electric chair.

Already intensely private people who shared a fear of crowds, the Lindberghs retreated further from society. After receiving threats targeting their second child, the Lindbergs moved to England. It seemed the only option to outrun the “tremendous public hysteria” in the U.S.

Charles and Anne Morrow Lindbergh lived in Europe in the years leading up to World War II, during which Charles became publicly linked to Hitler’s regime when he accepted a medal from Hermann Göring in 1938, the Reich’s second most powerful man.

A year later, however, the Lindberghs returned to the U.S. to avoid the conflict engulfing Europe.

Charles Lindbergh publicly spoke out against the United States intervening in the impending war, and Anne Morrow stood by her husband. She even penned a short book that encouraged isolationism and warned that fascism was “the wave of the future,” a stance that earned her a wave of negative press.

The backlash against the Lindberghs caught Anne Lindbergh off guard. She later confessed that they were “both very blind, especially in the beginning, to the worst evils of the Nazi system.”

Even though the couple’s anti-interventionist stance was shared by the majority of Americans at the time, the bombing of Pearl Harbor changed her views on war.

The Dissolution Of Her Marriage And Best-Selling Book 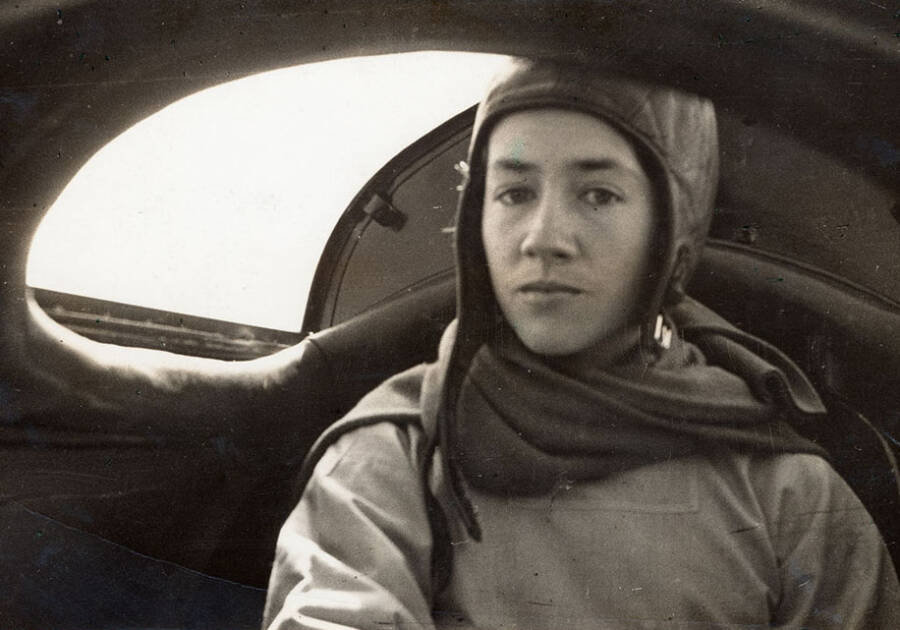 National Air and Space Museum, Smithsonian InstitutionMorrow Lindbergh was a daring pilot in her own right and acted as navigator to her husband on a transcontinental flight.

After losing her son Charlie, Anne Morrow Lindbergh went on to have five more children. After each child, her husband took her on weeks-long flights to “wean” her from her newborn. And when Anne sought out psychotherapy to treat her ensuing depression during this time, Charles moved out of their bedroom.

Realizing her experience as a wife second to her husband was felt in women all over America, Lindbergh wrote Gift from the Sea in 1955. The book spoke to millions of women who defined themselves first as wives and mothers but increasingly found themselves unfulfilled.

“I begin to understand why the saints were rarely married women,” Lindbergh wrote. “I am convinced it has nothing inherently to do, as I once supposed, with chastity or children. It has to do primarily with distractions … woman’s normal occupations in general run counter to creative life, or contemplative life, or saintly life.”

Gift from the Sea sold more copies in 1955 than any other nonfiction book.

Charles and Anne lived increasingly separate lives during this time. While traveling Europe, Charles secretly pursued long-term affairs with three women which resulted in seven children that Lindbergh tried to hide from the world.

After 45 years of marriage, the wife of Charles Lindbergh became a widow in 1974. She devoted her remaining 22 years to advocating for women and encouraging the environmental movement. By the time she died in 2001, she had lived through ten decades of intense change in America.

Born into a world that defined women’s value as homemakers, a role which she gladly embraced for a time, Anne Morrow Lindbergh also changed with the times. Though she penned a pro-fascist book in the late ’30s, she evolved, and in the 1950s, penned a feminist manifesto.

A decorated pilot and award-winning author, Anne Morrow Lindbergh broke away from her early ambitions to serve as her husband’s page to chart her own path.