The Tragic Story Of The Lindbergh Baby Kidnapping

Though a suspect was identified, tried, convicted, and executed, mystery still surrounds the infamous Lindbergh baby kidnapping of 1932.

On May 12, 1932, the tiny body of one-year-old Charles Augustus Lindbergh Jr. was discovered in the woods outside of Trenton, New Jersey. The coroner’s report stated that the child had been dead for over two months. The child’s skull had a hole in it as well as several other fractures, and the coroner ruled the cause of death as a blow to the head. Several of the baby’s body parts were also missing.

The Lindbergh baby, the son of Spirit of St. Louis pilot Charles Lindbergh Sr., had been missing for roughly three months after being kidnapped from his crib at the Lindbergh home.

The child had been put to bed by the nurse at 7:30 PM. Two hours later, Lindbergh Sr. heard a noise coming from that he assumed to be a wooden crate, snapping in the kitchen. At 10:00 PM, the nurse discovered that the child’s crib was empty. 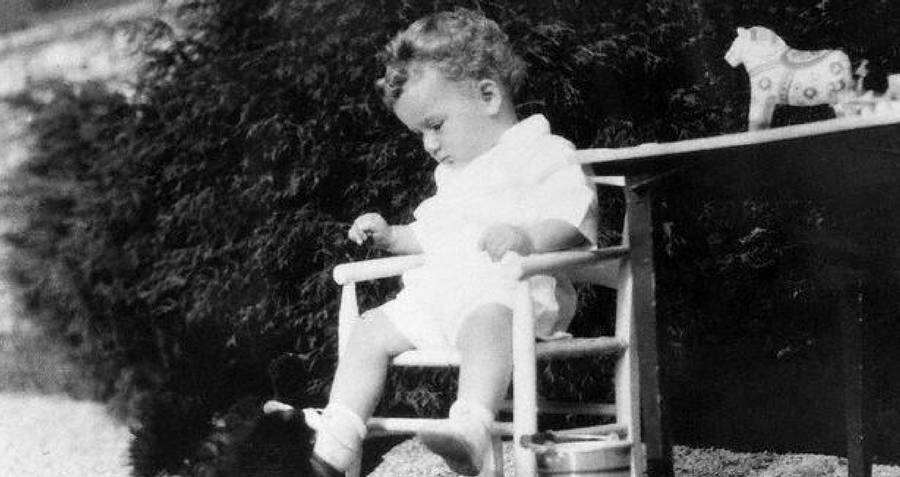 FBI ArchivesCharles A. Lindbergh Jr., victim of the infamous Lindbergh baby kidnapping, sitting outside his home, several months before his abduction.

After discovering that the child was not with the nurse, or with his mother, Lindbergh Sr. discovered a ransom note on the windowsill and a broken ladder outside the window. After reading the note, Lindbergh Sr. fruitlessly searched the house and the grounds before calling the police.

For three months, the Lindbergh family, along with the FBI, searched for the child, even fulfilling an enormous ransom request and interviewing countless suspects and witnesses. 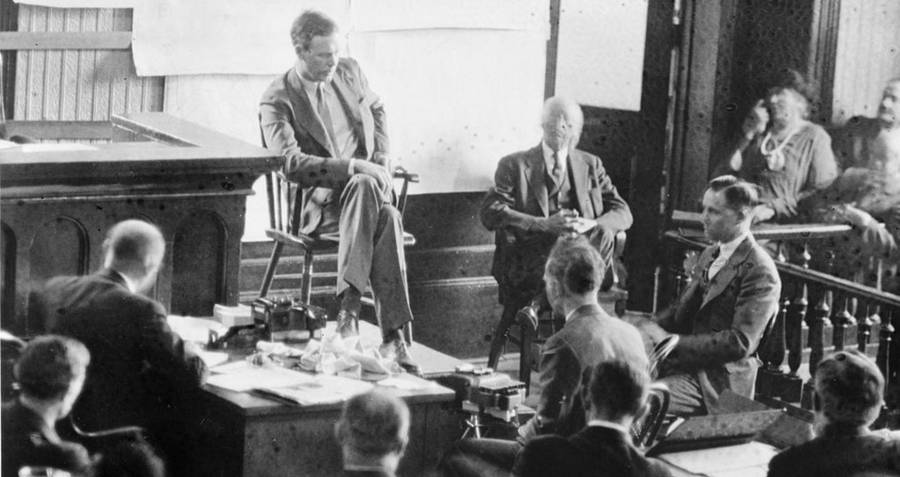 Wikimedia CommonsCharles Lindbergh testifying at the trial of Richard Hauptmann.

In the end, the official culprit named was Richard Hauptmann, an immigrant from Germany who had a criminal record back in his homeland. Police discovered Hauptmann in possession of $14,000 of the original $50,000 used to pay the ransom after tracking him through one of the $10 bills he had spent at a local gas station.

Hauptmann was arrested and charged with capital murder of the Lindbergh baby, a charge that allowed the death penalty as a possible option. The trial was dubbed the “Trial of the Century,” with one reporter even claiming it was the “biggest story since the Resurrection.”

As big as the trial was, the jury was surprisingly quick to return a guilty verdict. He was immediately sentenced to death and his two requests for appeal were both denied. On April 3, 1936, four years after the kidnapping, Richard Hauptmann was executed via electric chair.

The Official Investigation Of The Lindbergh Baby Kidnapping 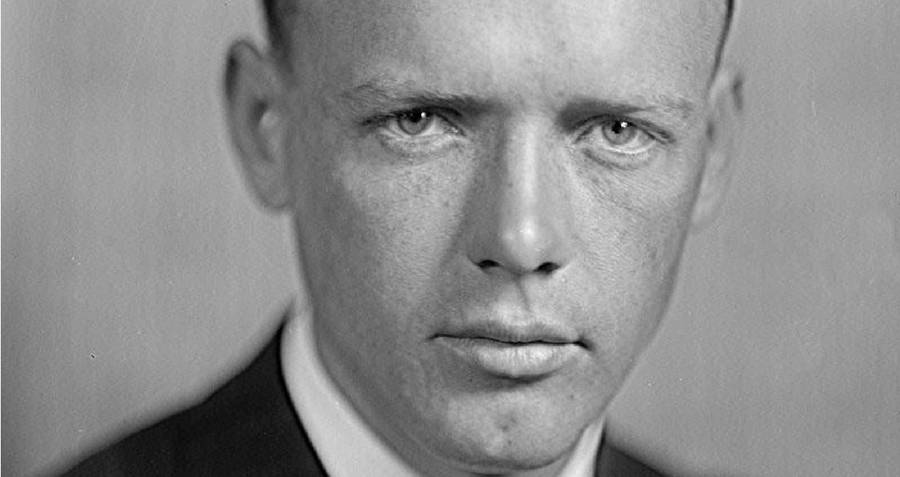 Wikimedia CommonsCharles Lindbergh’s fame added to the media coverage, but made it hard to ascertain which information was authentic and which was an attempt to be in the spotlight.

Though the case seemed open and shut on paper, the investigation was far from. Between the media frenzy, the mysterious ransom letters, and the numerous side investigations happening, it’s a miracle anyone was convicted.

When the Lindbergh baby kidnapping was first reported, hundreds of loyal Lindbergh fans and concerned citizens descended upon the Lindbergh estate. While the media attention helped to boost the case and help spread the word about the missing toddler, the high levels of traffic on the estate effectively destroyed any footprint evidence that might have been found outside the home.

It also encouraged hundreds of false reports of sightings and information. Military officials and investigators all offered their services, claiming to have expertise in kidnappings and law enforcement. However, only one of them truly did.

Herbert Norman Schwarzkopf, superintendent of the New Jersey State Police Department, along with Lindbergh, theorized that the Lindbergh kidnapping was part of an organized crime ring rather than a single perpetrator seeking the ransom money. Following that lead, they reached out to mobsters, both in and out of prison, hoping one of them would have information on the Lindbergh baby.

Al Capone himself even reached out to Lindbergh, offering his services in exchange for an early prison release, though he was quickly denied. Similarly, it was decided that mobsters were likely to be less than helpful when it came to offering up information for free.

Due to the media circus and the high profile of Lindbergh, President Herbert Hoover was notified of the kidnapping the morning after it happened. Though kidnappings were usually dealt with among local authorities, Hoover assigned the entire Bureau of Investigation (not yet Federal) to the case and authorized them to work with the New Jersey police.

As a reward for information pertaining to Charles Lindbergh Jr.’s case, the police department offered up $25,000. In addition, the Lindbergh family offered another $50,000 of their own. 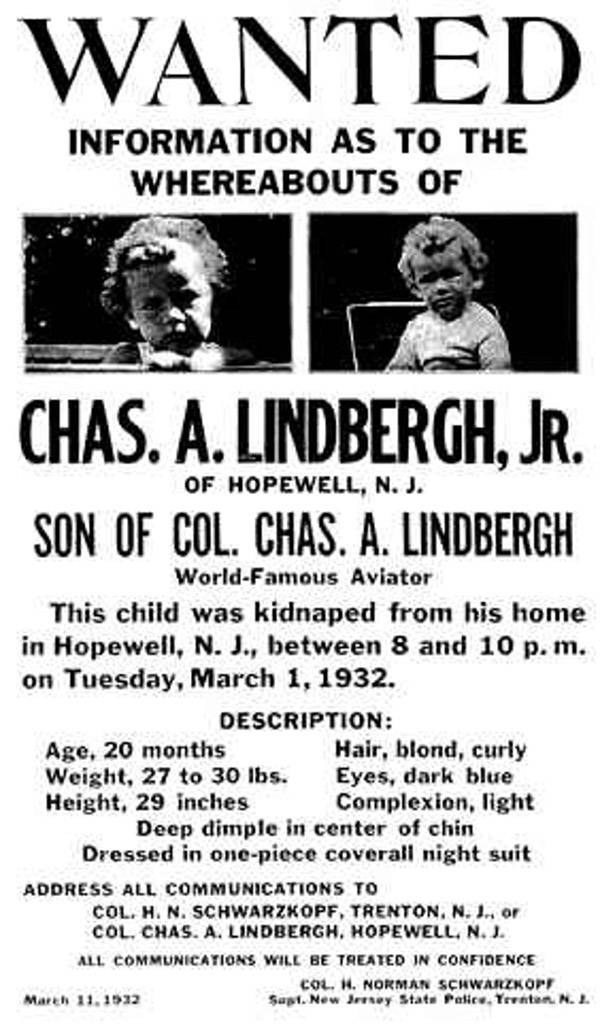 A wanted poster for the Lindbergh baby.

While the New Jersey Police were investigating alongside the Lindbergh family, a retired New York school teacher was also taking an interest in the Lindbergh baby case.

John F. Condon, who was at the time a well-known personality in the Bronx, wrote a letter to a local newspaper offering a reward of $1,000 if the kidnapper would return “Little Lindy” to a Catholic priest. Surprisingly, Condon received a letter back from people claiming to be the kidnappers, asking Condon to be their intermediary between them and Lindbergh.

Lindbergh, desperate to find his son, agreed, allowing Condon to fulfill the letters request. Condon placed a classified ad in another newspaper and arranged a meeting with one of the kidnappers to take place in Woodlawn Cemetery in the Bronx.

The meeting did indeed take place, though under cover of darkness, so the culprit’s face was never clearly seen. However, the man said his name was John and claimed he was part of an escaped Scandinavian gang. He claimed to have the toddler in his possession in a boat off the coast and would return it for the ransom. When Condon doubted the man’s story, the man promised to return the baby’s pajamas.

Indeed, a few weeks later, Condon received a toddler’s sleeping suit in the mail. Lindbergh confirmed that the pajamas were his sons and asked Condon to continue communicating with the kidnappers and fulfilling their requests.

The Ransom For The Lindbergh Baby 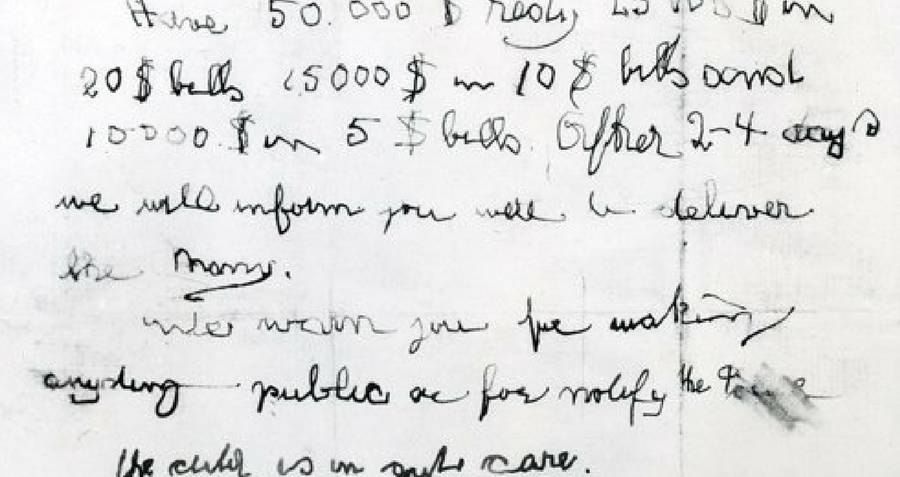 Wikimedia CommonsA copy of the first ransom note that the Lindberg’s found in Little Lindy’s bedroom.

Over the course of the Lindbergh kidnapping investigation, the Lindberghs and Condon received a total of seven ransom letters. The first was found by Charles in his son’s room immediately after discovering the boy was gone. It outlined the Lindbergh baby kidnapping and asked for $50,000 to be delivered to a yet-undisclosed location in small bills.

The first note was signed with a “signature,” a hand-drawn symbol comprised of three circles and three punched out holes. The second and third notes, delivered to the Lindbergh home and local investigators, carried the same symbols. The rest of the notes were delivered to Condon and did not carry the notes, though their authenticity was confirmed.

After the delivery of the seventh note, the Lindberghs and the police authorized Condon to orchestrate a drop off of the funds. The ransom money was comprised of gold certificates, chosen because they were about to be withdrawn from circulation, placed inside a handmade box, specifically designed so that it would be easy to recognize in the future. The bills were not marked, but each bill’s serial number was recorded so it could be tracked in the future.

Condon met with “John” on April 2, 1932, to hand over the money. He was told at the meeting that Charles Lindbergh Jr. was in the custody of two innocent women but provided no further information. 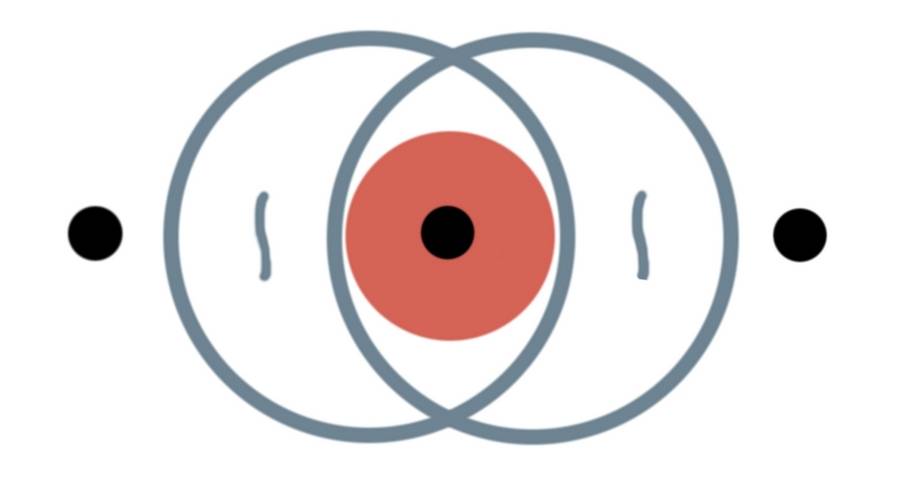 Wikimedia CommonsThe signature found at the bottom of each letter.

Having no leads besides “Cemetery John,” the police began tracking the serial numbers of the ransom bills.

A pamphlet was distributed to businesses in New York containing the serial numbers and providing information for what to do if they were found. Some of the bills turned up, though most went unseen. Most of the bills that appeared showed up randomly and in scattered locations such as Chicago and Minneapolis, though the people who had used them were never located.

A break in the case came on the day that the gold certificates, which made up a large sum of the ransom, were ordered to be turned in for other bills. A New York man brought $2,980 into a Manhattan bank, hoping to exchange them. It was only after he left the bank that it was discovered that the serial numbers matched those of the ransom bills.

Over a period of 30 months, police noticed that many of the bills had started popping up, specifically in the upper east side of Manhattan. Even more specifically, they were being spent along the Lexington Avenue subway route. After a local gas station called and said they had one of the ransom bills in their possession, police were led to Richard Hauptmann. 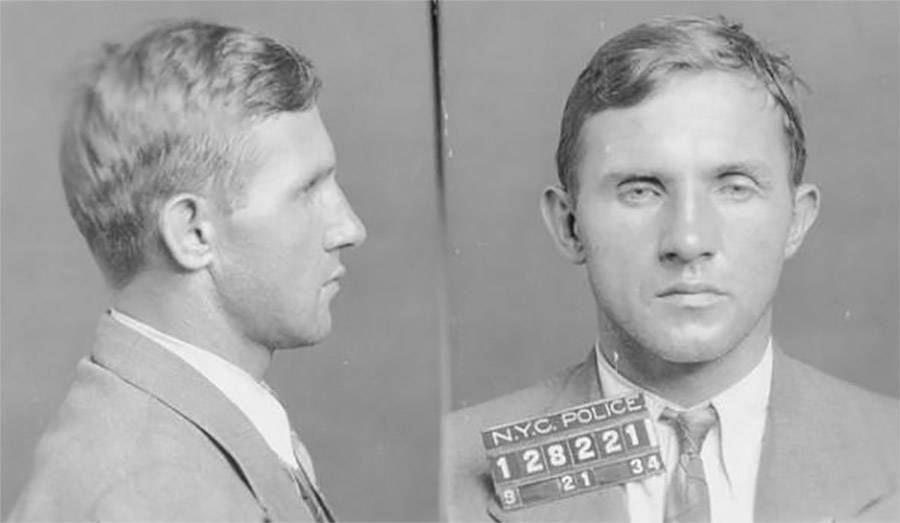 Though Hauptmann is considered the official kidnapper of Charles Lindbergh Jr., that hasn’t stopped conspiracy theorists from coming up with their own version of what actually happened during the Lindbergh kidnapping.

Defenders of Hauptmann’s are quick to point out that his fingerprints were never found on the ladder or any of the ransom notes. They also attest to the fact that the crime scene was a mess from the start and that any evidence available was quickly compromised by the media circus it became.

Some experts — both self-proclaimed and legitimate — have theorized that Hauptmann was a scapegoat and that Lindbergh knew who the real kidnapper was but was either in on it or too afraid to say anything.

In fact, one of the most popular, and some might say substantiated claims is that the kidnapping was perpetrated by Charles Lindbergh himself. Some say that he accidentally killed his son while attempting a practical joke and staged the kidnapping to cover up his crimes, pointing the finger at Hauptmann to cover his own deeds.

Some believe that Lindbergh orchestrated the kidnapping as a publicity stunt and that after the hired kidnappers didn’t get whatever it was Lindbergh had promised them, the stunt went horribly wrong.

Lindbergh, his family, and the New Jersey police have argued against the theories that he was responsible for the kidnapping, insisting that everything they knew about the case suggested it had been legitimate and that the toddler’s death was simply the result of the kidnapper snapping under pressure.

Whatever the case, though it is closed, the Lindbergh baby kidnapping has become one of the most controversial and conspiratorial cases to ever be discussed by the American public.

Outside of pop culture and media, the case broke ground when it pushed Congress to pass the Federal Kidnapping Act, which made transporting a kidnapping victim across state lines a federal offense. The law is commonly referred to as the “Lindbergh Law.”