The bright snapshot of her suburban life belied a dark negative — Kristen Gilbert was a serial killer who preyed on the weakest victims: those she nursed.

Pretty, well-liked, and intelligent, Kristen Gilbert’s seemingly blessed life hid a damning secret. She appeared to have it all: a good nursing job, loving husband and children. Down to the blonde bob, Kristen Gilbert was virtually indistinguishable as the typical mother in the Massachusetts suburb she called home.

But her facade of an ordinary working mother covered a much more unusual life: one of duplicity and murder. Convicted on four counts of murder, it’s possible the victims Gilbert left in her wake numbered even more.

The Making Of A Murderess 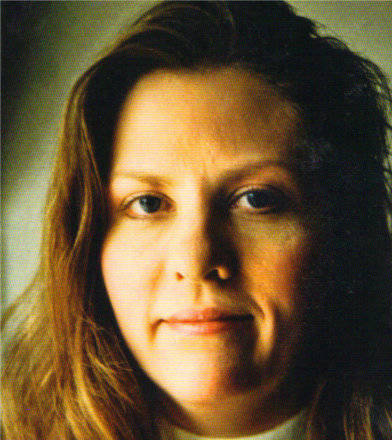 Kristen Gilbert’s origins were as unremarkable as anything else on the surface of her life. She was born Kristen Heather Strickland on November 13, 1967, in Fall River, Massachusetts, and raised in a nuclear family of a working dad and homemaker mother in a well-to-do Massachusetts suburb.

A gifted student, Gilbert was a member of the math club and ultimately studied her way into nursing. But at the same time, Gilbert was something of an oddball. Friends and former boyfriends recalled her as manipulative. She reportedly lied a lot as well.

While in college at Bridgewater State College in 1984, a young Gilbert suffered psychiatric episodes in which she made violent threats against herself and others. She once even left an ex-boyfriend a note in which she claimed to have eaten glass and lied about a suicide attempt. 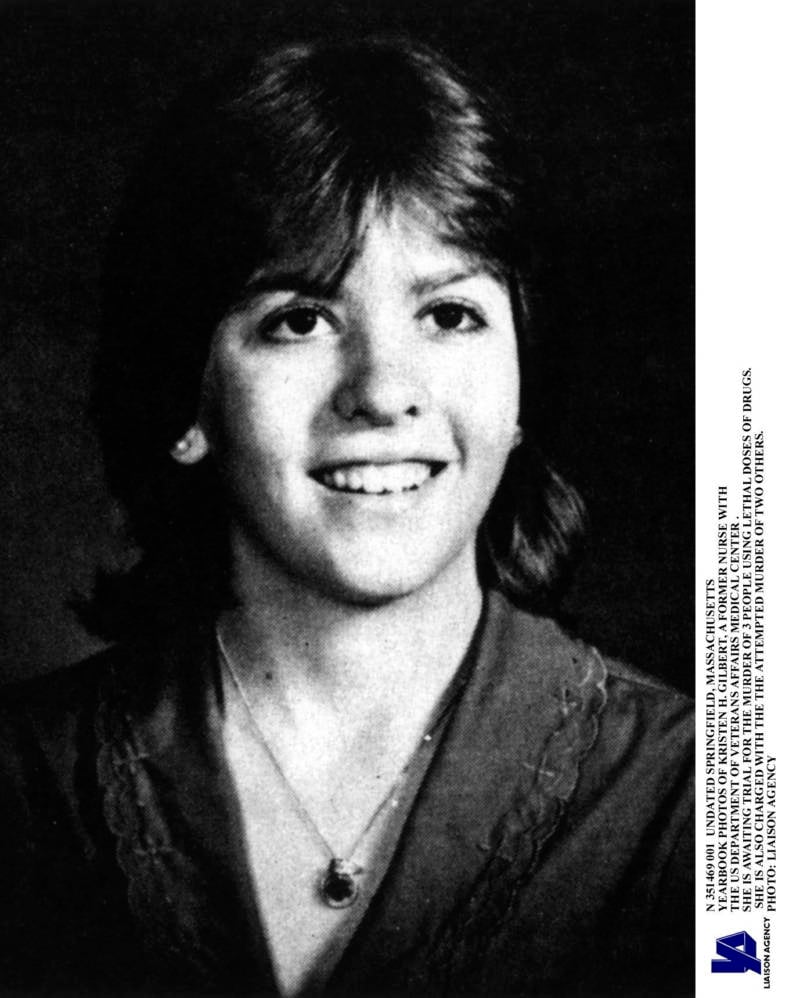 She went on to get her nursing degree at Greenfield Community College in 1988 when she married Glenn Gilbert and began working at Northampton’s Veteran Affairs Medical Center. Her work at the Northampton VA hospital was rewarding, challenging, and exciting. Her coworkers liked her and she reportedly organized a yearly gift exchange for disadvantaged families.

Meanwhile, she and her husband had two children and Gilbert maintained a burgeoning social life. Her superiors at the hospital were pleased with her capability and her work. All should have been well, but this kind of life, perhaps, was not quite up to Gilbert’s standards.

After being assigned to the night shift, Gilbert began an extramarital affair with a hospital security guard, James G. Perrault, an Army veteran of the Persian Gulf War.

“After a few weeks of just flirting back and forth, we were down at the VFW, and after the VFW closed, I walked her out to her vehicle and we had a kiss,” said Perrault. Their forbidden workplace romance blossomed amidst the drama of the hospital — which also often involved Gilbert.

The nickname became more and more prescient, as it was later estimated that she was on duty during half of her ward’s 350 deaths in a seven-year span. The odds of that being an accident are one in 100 million.

Kristen Gilbert may have feared that the illicit nature of her affair wouldn’t be enough to keep their hearts beating for one another, and began to manufacture scenarios, possibly to impress Perrault. Maybe, like Jane Toppan, she was aroused by watching life slip away as she administered epinephrine to healthy hearts — essentially adrenaline — exciting the hearts to pump out of control.

Maybe she just basked in the attention of swooping in and restoring life. Regardless of Gilbert’s intent, her crimes were clear. 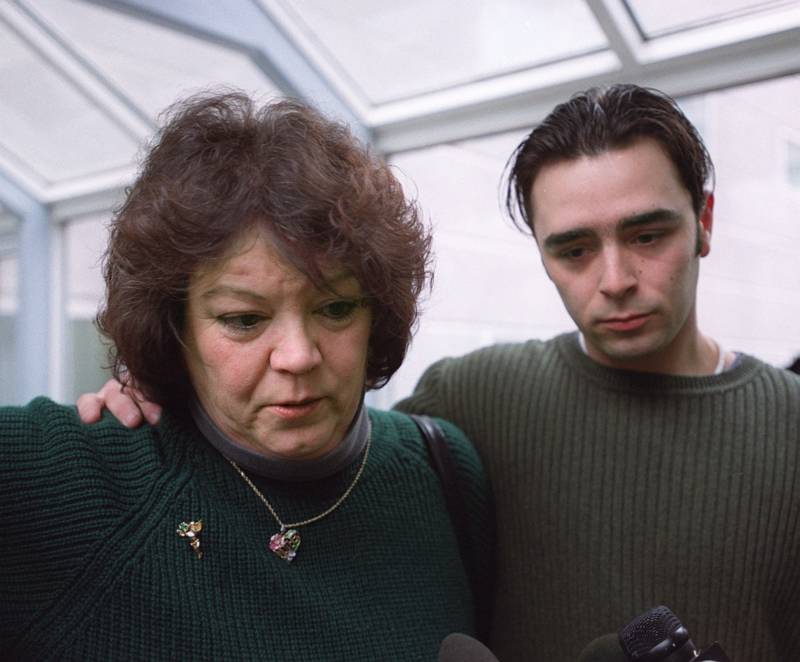 John Blanding/The Boston Globe via Getty ImagesNancy and son Jeff Cutting, the family of Kenneth Cutting, when Gilbert was found guilty of murdering the former soldier.

Meanwhile, Kristen Gilbert’s marriage dissolved. She began to prepare home-cooked meals allegedly laced with a drug to increase her husband’s frequency of peeing. Before her trial, prosecutors claimed that Glenn Gilbert told one witness that his wife was trying to have him “out of the house by Thanksgiving.”

Glenn Gilbert began to get sick. He was taken to an emergency room by his wife though to no avail, he fell ill again just a week later. She allegedly tried to poison her husband while he was receiving care at Cooley Dickinson, a local civilian hospital. She said she wanted to take a blood sample of her husband herself and have it tested later at the hospital where she worked.

One syringe was filled with a clear liquid and Kristen told her husband it was just a saline solution. But as soon as she inserted the needle, Glenn reported that “his arm grew cold” and when he tried to pull away from his wife she “pinned him against the wall with her hip.”

He survived the incident, though not without great reservations about his wife. Shortly after he was released from the hospital, Kristen left her husband and children for Perrault.

Gilbert’s presence around death in the hospital didn’t let up. In late July 1995, 66-year-old Stanley J. Jagodowski was admitted to the hospital for postoperative bowel obstructions. He required only oral medication, but a nurse reported seeing Gilbert enter his room with a syringe. The nurse allegedly heard the patient cry in pain just before Gilbert exited his room. He died of cardiac arrest later that night.

But no one could believe that the smart, controlled, and pretty, young nurse could be capable of murder. Even when a delusional war veteran refused treatment in her ward because of the rumor that “People are dying around here for no reason… The patients are talking about it. The staff is talking about it. The staff is talking to the patients about it,” Gilbert went unsuspected. The man was, after all, unwell.

He was later injected and killed by Kristen Gilbert, his attending nurse. 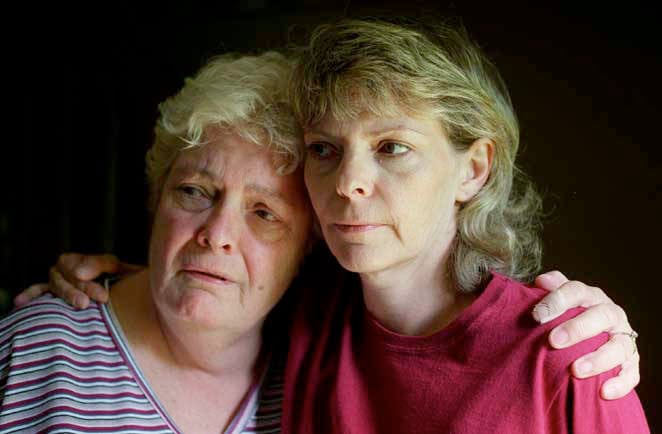 The Angel Of Death In Scrubs

Allegations of abuse when she was a home health aid, violent threats, and a pattern of manipulation all swirled around Kristen Gilbert’s blonde head as the investigations into the deaths of the veterans began. Nurses filed a formal inquiry in February 1996 based on their suspicions of Gilbert’s involvement in the deaths of two patients.

By then, Gilbert had quit her job and was institutionalized for a suicide attempt. From the psychiatric ward, she called Perrault and declared to him “I did it! I did it! You wanted to know? I killed all those guys by injection.”

Perrault went to the authorities and in a frenzied response Gilbert called in a a bomb threat at the hospital.

Of the myriad patients she injected, Gilbert was found to have successfully murdered four former soldiers Henry Hudon, Kenneth Cutting, Edward Skwira, and Stanley Jagodowski with epinephrine, though prosecutors suspect there were many more murders that went undetected.

Whether to try and save them or simply to watch them die, Gilbert injected them with enough adrenaline for their hearts to race past the breaking point. She was also accused of trying to kill three others.

Gilbert, the prosecution would later assert, had done this to show off to Perrault. He was called in the case of an emergency situation, and as her patients struggled for life after her injections, Gilbert would play “footsie” with Perrault as the patient lay in cardiac arrest.

She narrowly escaped the death penalty by lethal injection, which would have been an ironic end to the nurse who murdered via syringe. Instead, Kristen Gilbert received four consecutive life sentences, and the “Angel of Death,” spends the rest of her days behind bars in Texas.

After learning about Kristen Gilbert, get a look at other people leading violent double lives with fellow angel of mercy, Genene Jones and Karen Boes, who may have falsely confessed to her daughter’s murder.