Anneliese Kohlmann brutally beat and sexually exploited female concentration camp prisoners — but she was sentenced to just two years in prison for her war crimes.

Anneliese Kohlmann put on her SS uniform late into World War II. Before becoming a concentration camp guard, Kohlmann lived a very quiet life. But by the time the camps were liberated in 1945, Kohlmann had created her own legacy of being one of the most ruthless SS guards in the Nazi regime. 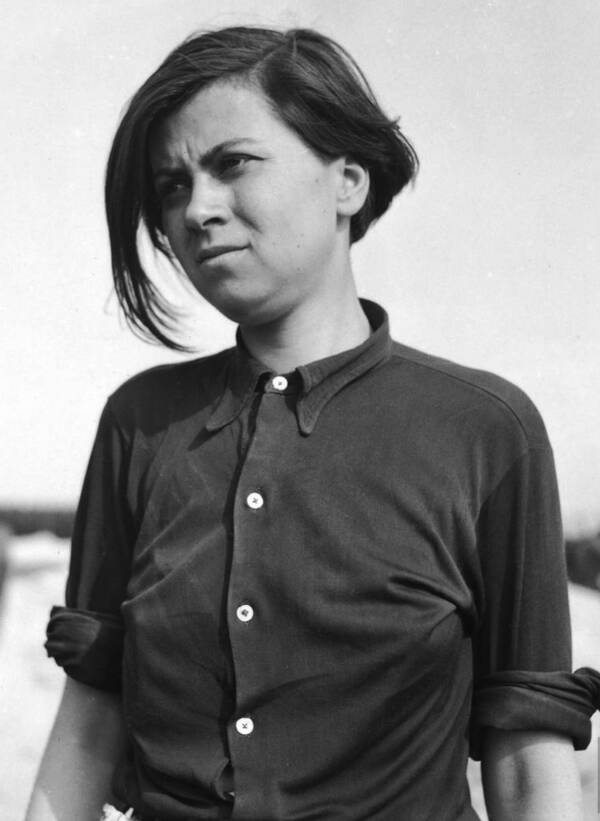 Imperial War MuseumAnneliese Kohlmann after her arrest in 1945.

Kohlmann became an Aufseherin — the term for a female concentration camp guard — in 1944, and she quickly became known as a brutal woman who would cruelly beat prisoners for the most minor transgressions.

From whipping women until they bled to sexually exploiting Jewish inmates, Kohlmann’s short time as a Nazi guard was marked by dozens of instances of ruthless behavior. And when the time came for her to face justice, she tried to pose as a prisoner herself to escape punishment.

After the war ended, Kohlmann was put on trial for the mistreatment of concentration camp prisoners. And despite being found guilty of war crimes, she spent only two years behind bars.

Anneliese Kohlmann’s Short But Brutal Career As A Nazi Guard

Like millions of other men and women, 19-year-old Anneliese Kohlmann joined the Nazi Party at the start of World War II. She became an official member on April 1, 1940, but she worked primarily in a civilian role as a streetcar operator for four years.

On Nov. 4, 1944, Kohlmann was conscripted into the SS Women’s Auxiliary. According to the German book Angeklagt: SS-Frauen vor Gericht (Accused: SS Women in Court), Kohlmann had just a week of training, during which she was essentially told “to treat particularly unfortunate people particularly badly.”

Kohlmann’s first assignment was as a guard at the Neugraben subcamp of the notorious Neuengamme concentration camp. She supervised female prisoners as they were forced to dig anti-tank ditches. The women reported harassment by five guards in particular — and Kohlmann was one of them.

In March 1945, after four months at Neugraben, Kohlmann was transferred to the Tiefstack slave-labor camp. Witnesses from both camps provided statements against Kohlmann at her trial in 1946.

They spoke of instances in which Kohlmann beat a woman so brutally that she bled from her hands and mouth. Another time, she hit an inmate with a stick until her arms were blue and swollen.

But her cruelty didn’t stop there. She was seen beating and kicking a pregnant woman so badly that her face was still swollen a week later. And when she caught another woman stealing a piece of bread, she sentenced her to at least 30 strikes with a cane.

Curiously, though, several witnesses noticed that Kohlmann beat older women more harshly and frequently than she did younger women. In fact, Anneliese Kohlmann even treated some of the young, female inmates quite compassionately in comparison.

At her trial, Kohlmann defended herself against the accusations of cruelty by admitting she’d given some women special treatment, such as allowing them breaks when she’d been told not to or sneaking them extra food.

According to an article published in the journal German History, a Czech Jewish woman named Věra Fuchsová had been in the same camps as Kohlmann and had witnessed this preferential treatment. Years after the war, Fuchsová recalled: “In Hamburg we already had a SS woman, a guard in the camp, a young girl, we called her Bubi, and she treated us kind of ok. A young, pretty girl, but, as it turned out later, she was gay. And she fell in love with one of our fellow prisoners.”

Fuchsová was talking about Anneliese Kohlmann and a Jewish inmate named Helene Sommer.

“I don’t know in how far the girl came close to her, but she had her mother there and she would have done anything for her, and on account of Bubi she had it good,” Fuchsová explained.

While the extent of Kohlmann’s relationship with Sommer is unclear, multiple women recalled that the two exchanged “caresses” and that Kohlmann had frequently spent the night with Sommer in barracks. One Holocaust survivor named Franci Solar wrote in her memoir that Kohlmann “came often at night to visit, leaving at dawn.” 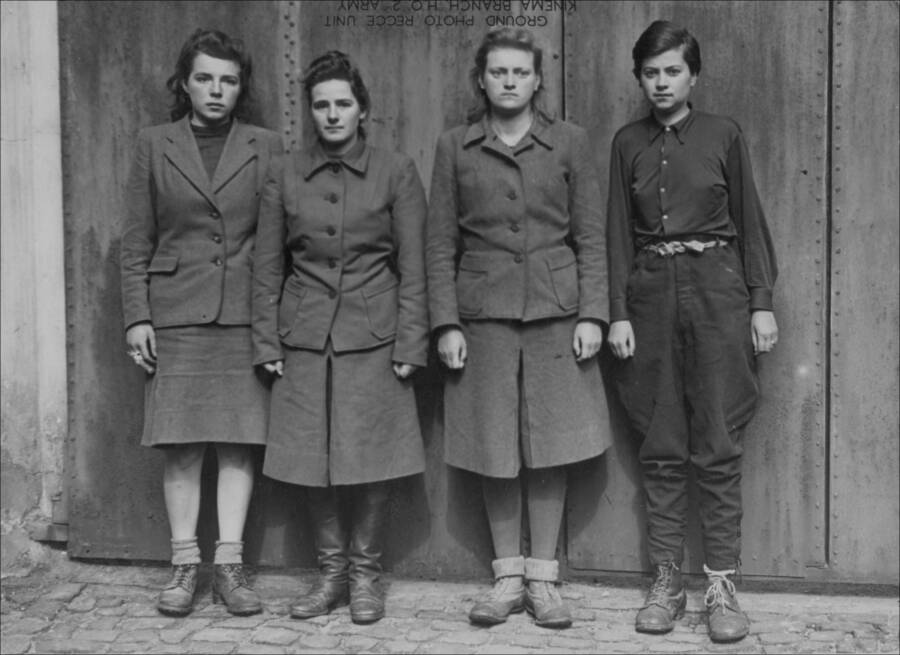 This type of sexual exploitation wasn’t uncommon during the Holocaust. According to the Heinrich Böll Foundation, male and female guards alike raped prisoners or forced them into sex in exchange for food, medicine, and security. With their lives at stake, prisoners were desperate to save themselves and their loved ones.

Another survivor named Fini Patay, who was just 14 in 1945, later wrote of this dynamic in Kohlmann and Sommer’s relationship: “She had an affair, that Bubi had an affair with her, she didn’t want to go with her, you know, but she used her.”

Kohlmann seemingly even planned to maintain a relationship with Sommer after the war. In a deposition after her arrest, she reportedly stated that Sommer had invited her to move to Prague after the war.

So as World War II came to a close, Kohlmann plotted to ensure she wouldn’t have to face justice for her heinous acts.

According a website dedicated to the history of Bergen-Belsen, on April 8, 1945, Kohlmann assisted in transporting a group of women from Tiefstack to the concentration camp at Bergen-Belsen. Upon arrival, she asked if she could stay and speak with her “cousin,” Sommer.

However, the camp commander refused and turned Kohlmann away. Instead of returning to her work station, Kohlmann escaped to Hamburg, hopped on a bicycle, and rode ten hours back to Bergen-Belsen. There, she snuck in during a shift change and donned a prisoner’s uniform.

Anneliese Kohlmann’s plan was to find Sommer and escape to Prague in an attempt to avoid punishment from both her fellow Nazis and the Allies, who were closing in on German forces.

British troops liberated Bergen-Belsen on April 15, 1945. For two days, Kohlmann remained among the prisoners, staying under the radar and waiting for her chance to sneak away to freedom. But on April 17, she was discovered. Fuchsová recalled, “After the liberation of Belsen we suddenly found that Bubi is among us, wearing the striped prisoner clothing. What to do now? She treated us fine, but she was a SS woman, so what to do with her?”

They turned her in.

Anneliese Kohlmann and the other women’s camp guards were given the initial sentence of doing the labor they’d forced on their victims. Allied forces tasked them with digging mass graves for the thousands of lost lives at the camp before taking them to a prison in Celle, Germany to await trial.

In June 1946, Kohlmann faced a military tribunal. Prosecutors called several witnesses and drew on records to confirm the abuse prisoners had suffered at the hands of Kohlmann. She tried to defend herself, claiming she only beat the women so that they wouldn’t receive even worse punishments from male commanders. She also pointed to the fact that many of the women had liked her because she gave them extra food. 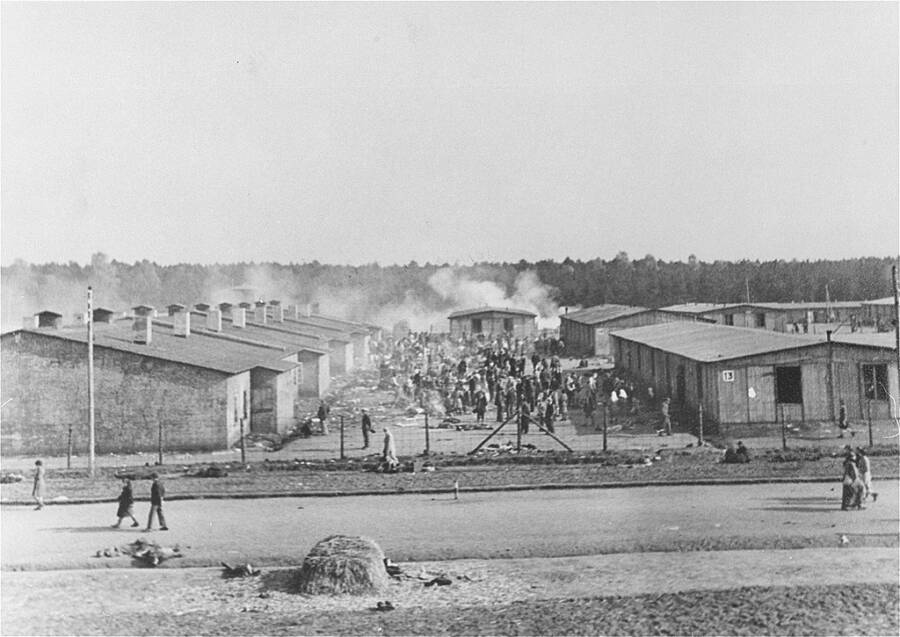 Public DomainBergen-Belsen was liberated on April 15, 1945.

Kohlmann begged for leniency in her sentencing. After all, she said, she’d only been a guard for five months and had never killed anyone. Her mother also testified in support of her 25-year-old daughter. She claimed Kohlmann had hated her job and had been depressed while home on leave.

In the end, Kohlmann was sentenced to only two years in prison for physically, emotionally, and mentally abusing concentration camp prisoners. However, since she’d already served time after her initial arrest, she was released the very day her trial ended.

Little is known about the rest of Kohlmann’s life. She moved to West Berlin in 1965, but there is no record of marriage or children, nor any evidence that she ever acknowledged what she had done was wrong.

Her name and crimes resurfaced in 2013 when Yonatan Calderon’s hit stage play Under the Skin premiered. In the production, which is based on Kohlmann’s story, a Nazi guard has a secret love affair with a Jewish prisoner named Charlotte.

Anneliese Kohlmann died in Berlin on Sept. 17, 1977 at the age of 56. Though she is one of thousands of women who guarded concentration camps during the Holocaust, she will forever be remembered as one of the most ruthless of them all.

Now that you’ve read about Nazi guard Anneliese Kohlmann, learn about Irma Grese, the “Hyena of Auschwitz.” Then, go inside the reprisal of the Dachau concentration camp guards.