It's the largest reptile egg ever discovered, and the creature who laid it had to have been at least 200 feet long. 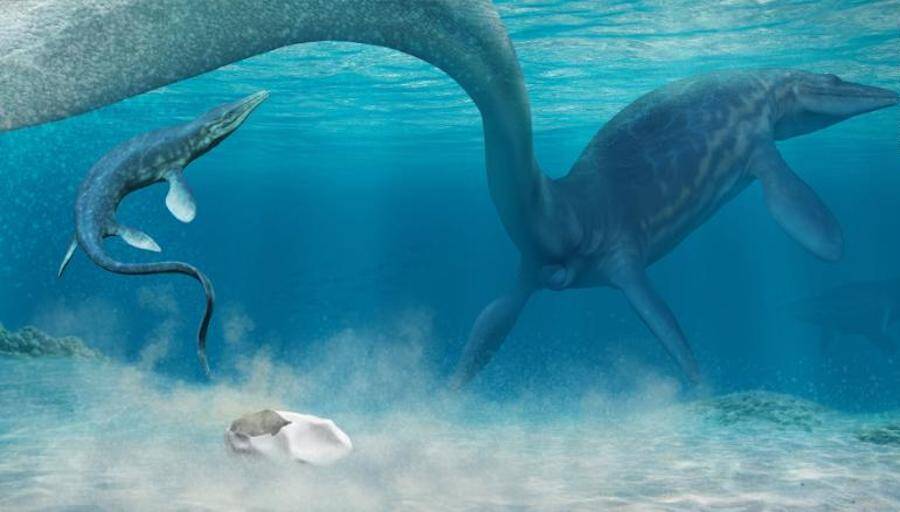 Francisco HueichaleoAn illustration of the underwater hatching process of the mosasaur dinosaur.

The largest reptile egg in recorded history has officially been discovered in Antarctica. According to IFL Science, the football-sized specimen is the first known fossilized soft-shell egg ever found on the continent, and is believed to have been laid by an extinct sea lizard around 66 million years ago.

Published in the Nature journal, the research indicates a giant marine reptile known as a mosasaur most likely laid this egg. For lead author and postdoctoral researcher at the University of Texas Austin’s School of Geosciences, Lucas Legendre, the discovery is remarkable in several significant ways.

“It is from an animal the size of a large dinosaur, but it is completely unlike a dinosaur egg,” said Legendre. “It is most similar to the eggs of lizards and snakes, but it is from a truly giant relative of these animals.”

Most remarkably, before this stunning find, it was generally believed that giant marine reptiles from the Cretaceous Period didn’t lay eggs. According to Legendre, “nothing like this has ever been discovered.” 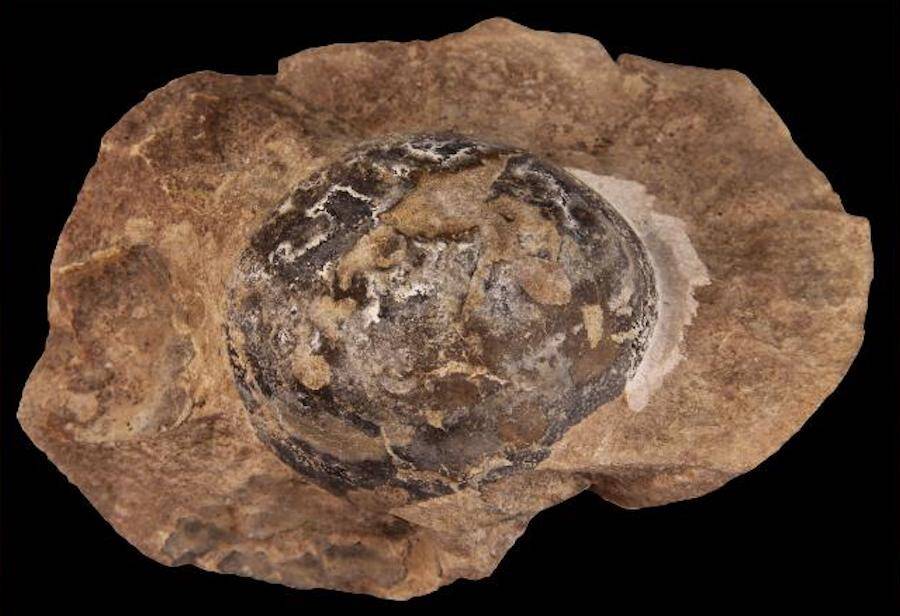 Diego PolResearchers didn’t even know the fossil was an egg until they pierced through its membrane with microscopes.

The fossil, which measured 11 inches long and seven inches wide, was originally discovered by Chilean scientists nearly a decade ago. For years, it simply sat in the National Museum of Natural History’s Chile section — without as much as a label — despite its staggering size.

“The almost-complete, football-sized soft-shelled egg is one of the largest eggs ever described,” said Julia Clarke of the University of Texas.

Scientists cheekily referred to the specimen as “The Thing,” in honor of the mysterious alien organism that crash-landed in Antarctica in John Carpenter’s science-fiction horror film of the same name. Unlike that nefarious creature, this egg was spawned by an animal far more comprehensible.

According to CNN, the mother who laid it would have been at least 200 feet long. The species has since been named Antarcticoolithus bradyi, and an analysis of 259 modern reptiles and their eggs suggests that this prehistoric sea lizard was a mosasaur. 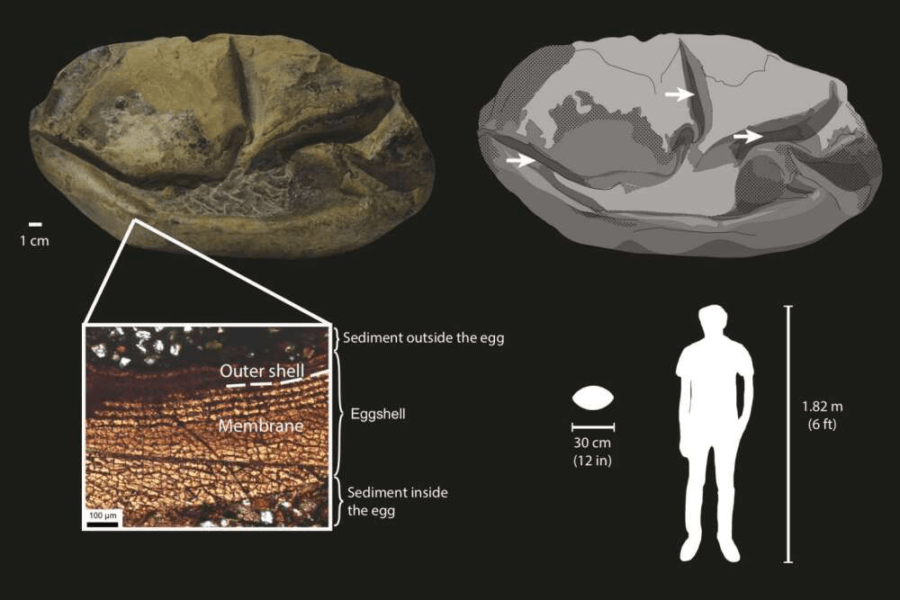 Legendre et al. (2020)A diagram connoting the various parts of the fossil egg and its relative size to a human adult.

Researchers were unaware that this large fossil was even an egg until they pierced through its membrane with microscopes and the egg “visibly collapsed and folded.” As it stands, it’s one of the largest thin-shelled eggs ever found, second only to the elephant bird’s egg found in Madagascar.

The egg’s structure bears similarities to the eggs of most snakes and lizards. This suggests an ovoviviparous lifestyle, whereby the animal hatches immediately after the egg is laid — having developed inside its shell within the mother all along.

“Such a large egg with a relatively thin eggshell may reflect derived constraints associated with body shape, reproductive investment linked with gigantism, and lepidosaurian viviparity, in which a ‘vestigial’ egg is laid and hatches immediately,” the study more precisely explained.

Of course, this particular egg had already hatched dozens of millions of years ago. While researchers largely agree that the animal within was a mosasaur, it could also very well have been a dinosaur species yet to be identified. 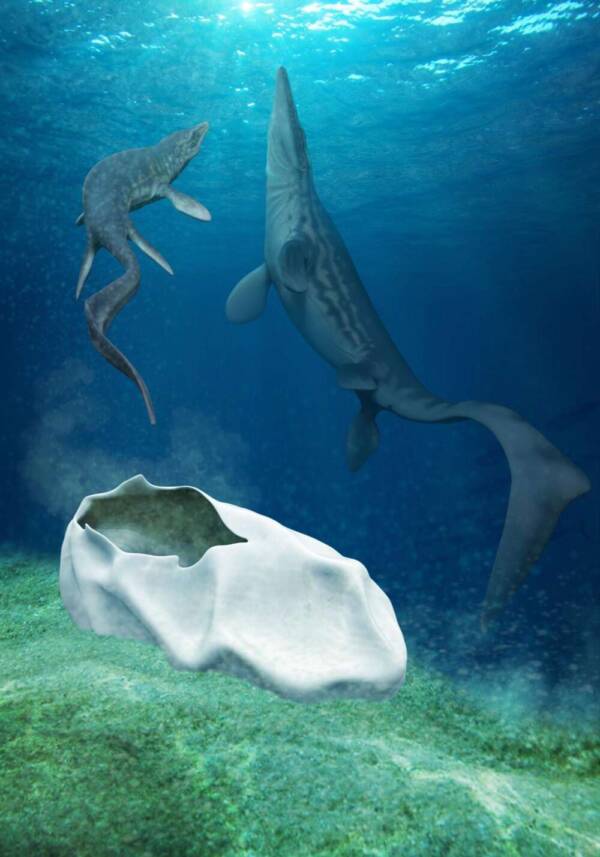 Francisco Hueichaleo (2020)Experts are currently trying to assess whether the ancient reptile hatched on land or underwater, like modern sea turtles or sea snakes, respectively.

Ultimately, the experts do have some considerable circumstantial evidence on their side, in terms of identifying the animal. Skeletons of both baby and adult mosasaurs and plesiosaurs were previously found nearby, suggesting the area was a “sort of nursery site.”

The area does, indeed, contain a protective cove environment. The mothers could have laid their eggs in the open waters, just as sea snakes today do.

Another theory posits that the adult reptile wriggled onto the shore and formed a makeshift nest with its tail, then hatched the egg. Then, it allowed the babies to scurry into the open waters as modern sea turtles do. In the end, many questions remain unanswered.

What is clear, however, is that this is the largest reptile egg ever discovered — the consequent study of which has been published alongside a second paper that posits how soft-shell eggs might have evolved over time.

After learning about the 66-million-year-old reptile egg discovered in Antarctica, read about divers who were looking for a WWII shipwreck discovering an enormous and gelatinous orb with thousands of baby squid inside. Then, learn about scientists discovering evidence of ancient Martian groundwater in Antarctica.