Starting in 1916, William Pester began living in a hut, foraging for fruits and nuts in order to eat, and spending most of his time alone in the California desert.

William Pester was like any other immigrant building a new life in America in the early 20th century — except that he was a nudist hermit who lived in a handmade hut in the middle of the desert.

He claimed that he came to California to “study himself with untrammeled nature as his classroom.” 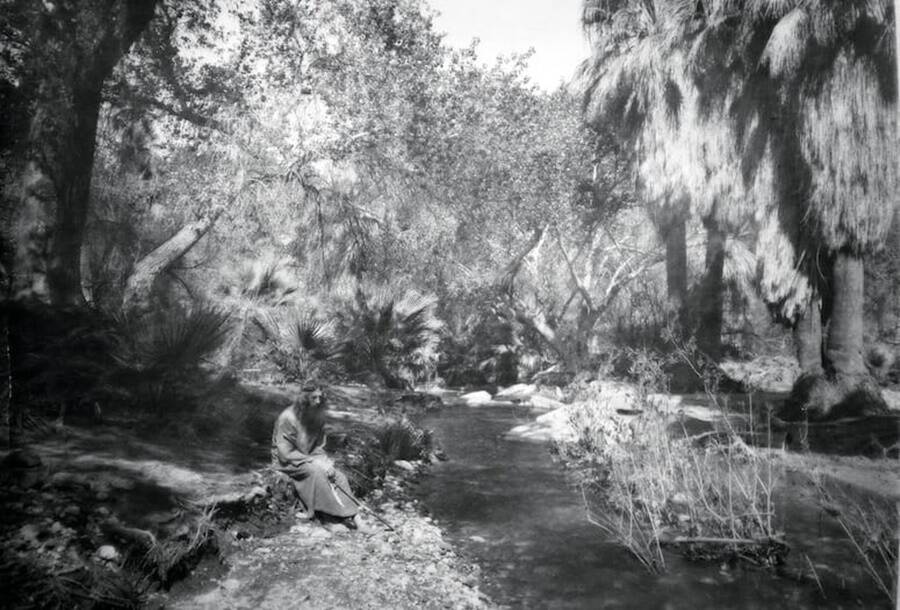 William Pester wasn’t the only European to bring radical ideas of anti-modernization to the deserts of Southern California, and he certainly wasn’t the last. However, many credit his rise to fame in the 1910s as a major inspiration behind the 1960s hippie movement. Meet the man who many believe was America’s first hippie. 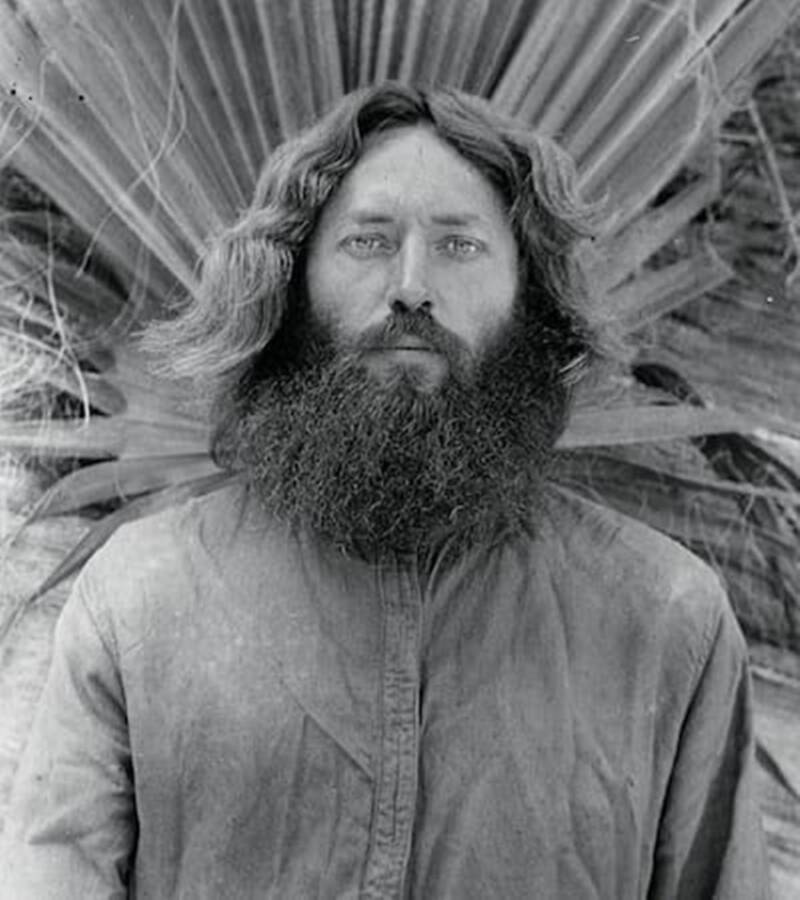 Palm Springs LifeHis extreme lifestyle grabbed the attention of the press and tourists in the Palm Desert area.

Before William Pester became the famous “Hermit of Palm Canyon,” he was born Friedrich Wilhelm Pester in a coal-mining town near Leipzig, Germany, in 1885. At 19, he left to escape the country’s mandatory military service.

Pester made his way aimlessly across Europe working as a laborer. Along the way, he picked up the philosophy of Lebensreform, which was a growing naturalist movement in early 20th-century Germany.

Lebensreform prioritized a shift back to natural living, which encompassed vegetarianism, natural healing, keeping material possessions to a minimum, and nudism. Many Lebensreform followers traded in their Judeo-Christian beliefs for a new nature-based spirituality.

Before Pester was born, rapid industrialization swept Germany during the late 19th century, shifting the country from an agricultural model to an urban one. Lebensreform was the antithesis of the country’s unprecedented industrialization and an extreme counter to the principles of capitalism.

As historian Michael Green noted, “The iron cage weighed heaviest, and the fight against it was fiercest, in Germany.”

William Pester, like many others in the Lebensreform movement, yearned to be free of the endless grind demanded by modern society. Pester eventually crossed the Atlantic and landed in the United States, where he made his way to the rugged landscape of California. 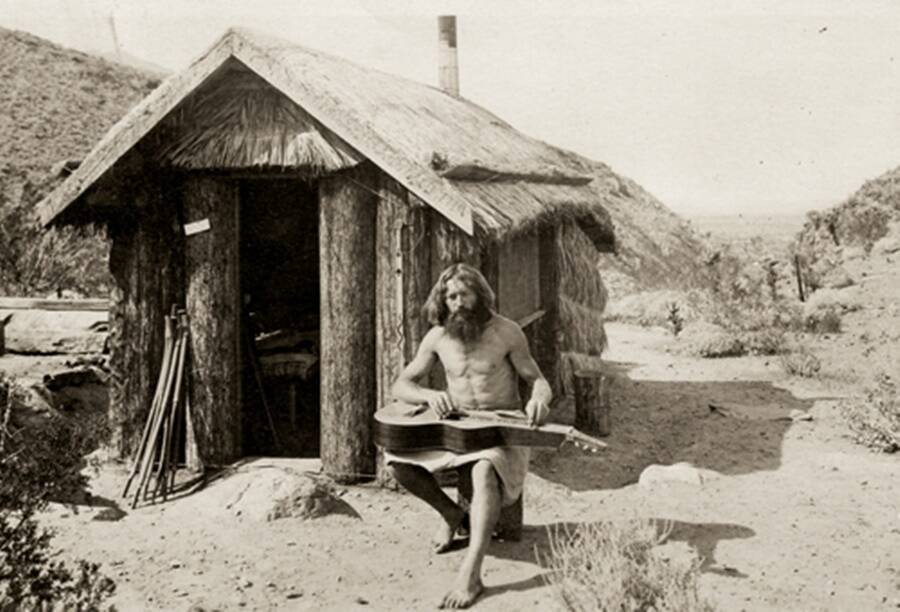 Stephen H. Willard/Palm Springs Art MuseumWilliam Pester holds a guitar next to the hut he built.

It’s no surprise that William Pester, eager to denounce worldly living, was attracted to the deserts of California, specifically Palm Desert.

With idyllic palm trees and isolated terrain, the Palm Desert area was already a mecca for naturalists seeking a remedy to urban life long before the “hippie boom” of the 1960s.

Palm Desert rests on the Agua Caliente Native American reservation, where the Cahuilla tribe have made Tahquitz Canyon home for at least 5,000 years.

“When I first came to Palm Springs, there were only a few Indians and an occasional white man. Now there are tourists all the time and motion-picture people pestering me, and I am no longer able to lead the life of contemplation that I desire.”

According to author Lyra Kilston, who wrote about desert dwellers like William Pester in her book Sun Seekers: The Cure of California, Pester settled on the reservation land sometime after 1906. He was the only white settler permanently living there. 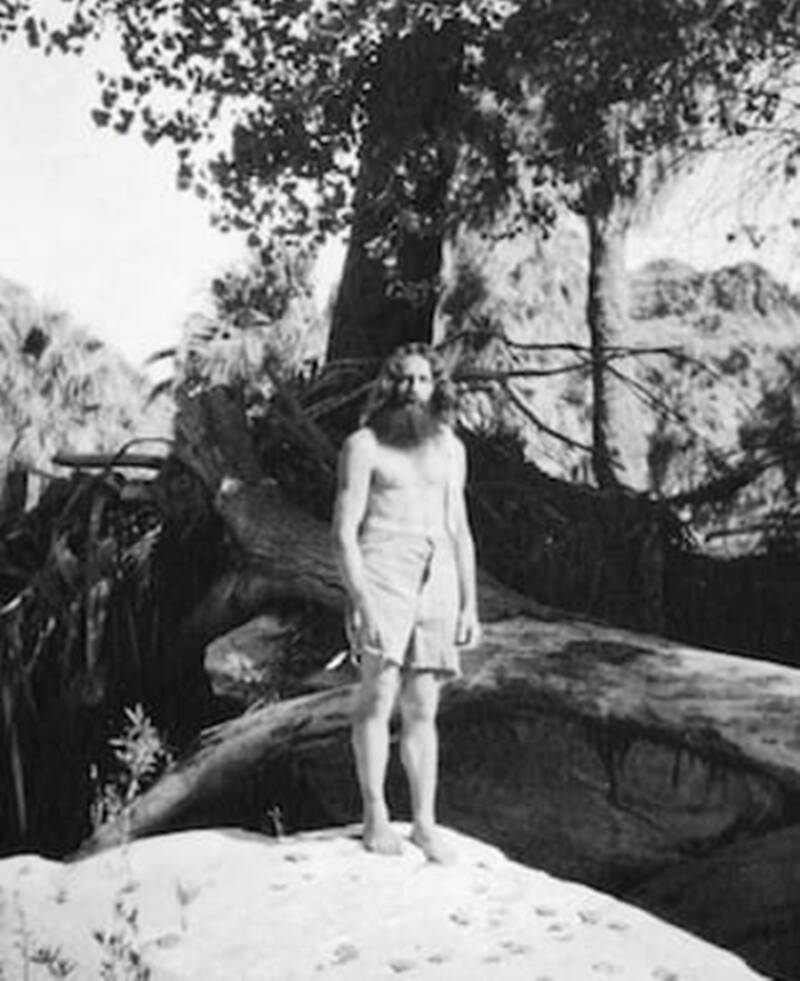 Palm Springs LifePester is photographed wearing shorts here but he usually spent his days in the nude.

Pester, who Kilston described as “lean, long-haired, and richly bearded,” built himself a modest hut out of the wood and bushy fronds of the palm trees.

He wore nothing except for a pair of sandals, which he made himself. He foraged for nuts and food, bathed in a dugout he made from a natural spring, and went on long solo walks in the desert’s brush.

After living out in the desert for a few years, Pester’s prolonged presence began to attract attention from tourists who traveled to Palm Springs and Palm Canyon to get away from the city.

While some came to seek refuge from the machinations of urban life, many came to gawk at the naked white man living in a hut.

“All man’s troubles, sickness, anxieties, and discontent, come from a departure from nature,” Pester explained of his chosen lifestyle.

“I was never sick because I obey the laws of nature and my food is simple… I have little use for money, and I am not bothered by politics or religion, as I have no special creed.”

All he wanted, he told people, was to find a way to return to the Garden of Eden, from which man had been banished.

“Nature Boy” And Trouble With The Law 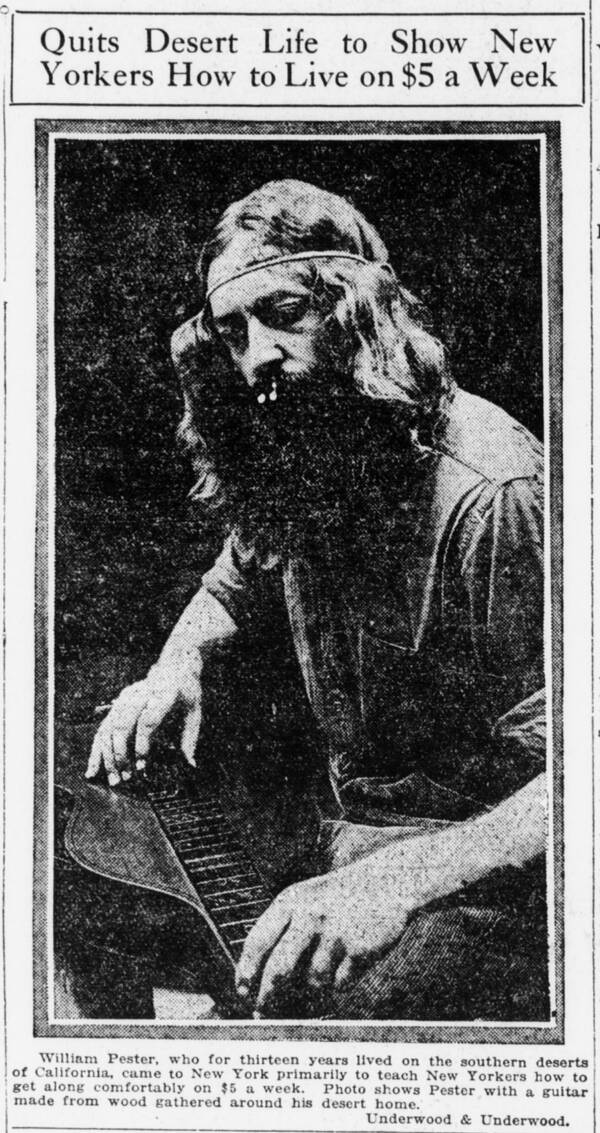 Wikimedia CommonsDespite his simple lifestyle, William Pester was often a fixture in the news.

While there were others who turned to natural healing and spiritual remedies, William Pester raised the bar to the extreme.

His lifestyle was particularly unusual in the early 20th century, when remarkable advancements in technology and commerce were taking place all over the world.

As more people in Palm Springs and Los Angeles began to hear of the mysterious desert hippie, journalists and curious travelers came to visit Pester’s hut to hear about his story.

Photographers were keen to capture the natural environment where they found William Pester bushy-bearded and living alone. He capitalized on this desire by selling postcards of his face to tourists.

Some of his most famous visitors were adventure novelist Zane Grey and Hollywood actor Rudolph Valentino, both of whom Pester was photographed with.

William Pester is widely believed to be the inspiration behind Nat King Cole’s 1947 hit “Nature Boy.” 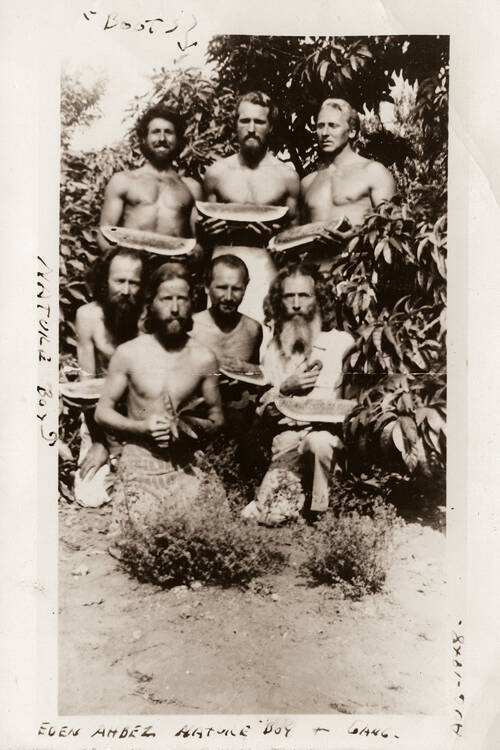 The Estate of Gypsy BootsNaturalist eden ahbez (front) with the “nature boys” he socialized with.

The song was written by eden ahbez, an eccentric naturalist nomad from Brooklyn who preferred his name not be capitalized because he believed the only title worthy of such emphasis was “God.”

The song’s lyrics certainly fit Pester, though it is also plausible that ahbez got his inspiration from the group of young naturalist men he often hung out with in Laurel Canyon in the 1940s.

Pester’s sacrifice of material possessions, however, did not extend to physical desires. According to the Desert Sun, Pester was arrested and imprisoned for oral copulation with teenage boys in 1940.

He was reportedly jailed at San Quentin Prison before he was later transferred to Folsom Prison.

The Dawn Of An Extremist Movement 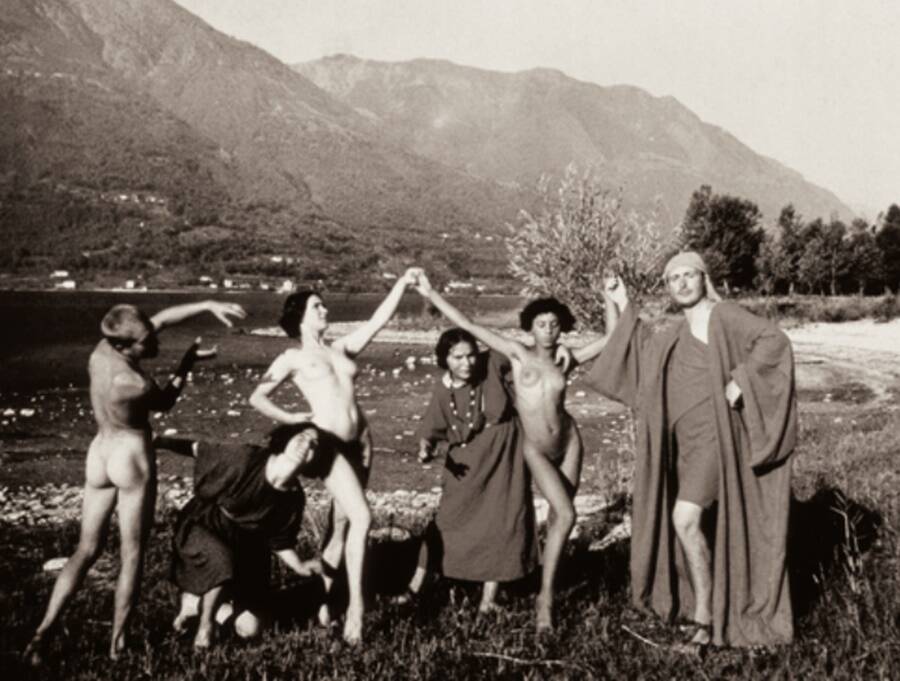 William Pester was released on parole six years after his arrest. Upon his release, Pester moved to Arizona where he eventually married. Not much is known about his life there. Pester died in 1963.

Interestingly enough, a wave of German immigrants who brought the Lebensreform philosophy to Southern California continued decades after Pester’s own move to the state.

Naturopathy practitioner Arnold Ehret and health entrepreneurs Hermann Sexauer and John and Vera Richter were among them.

The spiritual ideals embodied by the Lebensreform philosophy were captured by German artist Fidus, who drew a 1910 illustration titled “Back to Nature – A Couple.”

The artwork portrays a man and a woman standing on what appears to be farmed land as they share a drink from a horn-shaped cup. 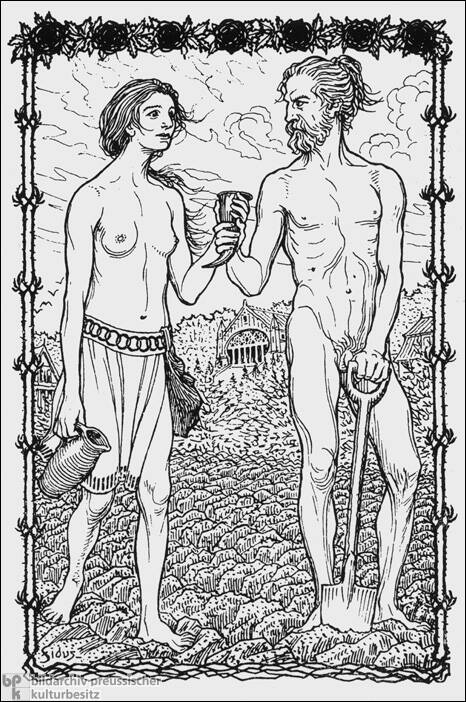 © Bildarchiv Preußischer Kulturbesitz“Back to Nature” by Fidus embodies the spirit of the Lebensreform philosophy.

Like many extreme movements, the Lebensreform also had a dark offshoot.

The idealism of “blood and soil” was adopted by Germany’s National Socialists, which led to a branch of Lebensreform infused with the Nazi belief of white supremacy. Fidus himself was an official member of the Nazi party.

Historian Christian Adam cites the popularity of Hans Surén’s 1936 photographic study Man and Sun: The Aryan-Olympian Spirit of nudist Germans with texts on the benefits of a natural lifestyle during the Third Reich as an example of how the two ideologies melded together.

Images that worshipped physical perfection of white bodies “didn’t just hold the promise of freedom. They also held thoughts of breeding – the body as a breeding tool that must be properly trained and fed like a race horse,” Adam wrote.

However, William Pester’s hippie lifestyle originated from the mainstream Lebensreform, and Pester himself had no Nazi ties.

Lebensreform took a less insidious form in the counterculture era of the 1960s, a period in American history in which the peace-and-love generation was born.

Today, there is no palm tree hut, natural spring bath, or garden where William Pester once lived. His cabin was turned into a Native American trading post called “Hermit’s Bench.”

Only the memory of his peculiar presence in the California desert lingers on.

Now that you’ve learned about William Pester, check out 33 “summer of love” photos that capture the hippies at their height and take a look at Woodstock photos that will take you to the 1960s’ most iconic music festival.