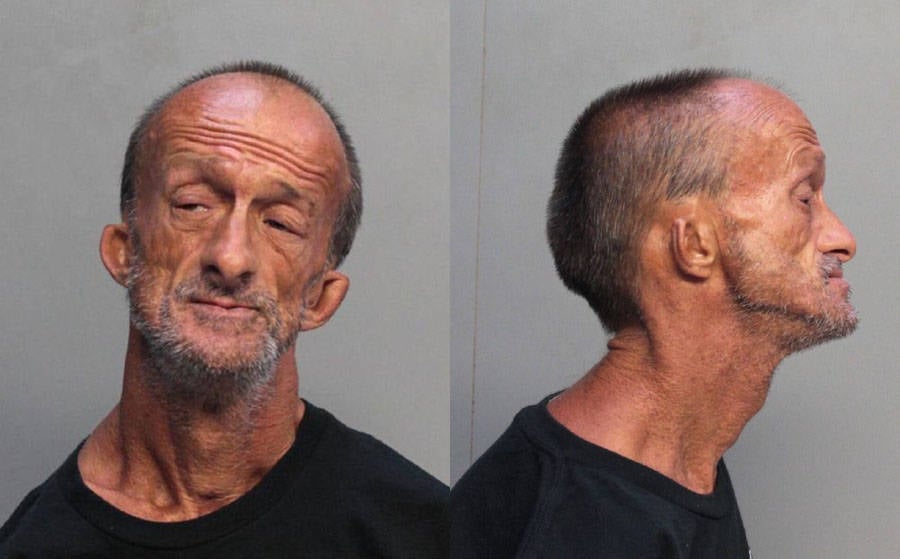 Jonathan Crenshaw may not have any arms, but that didn’t stop him from stabbing a man.

Just after midnight on July 10 in Miami Beach, Fla., the 46-year-old homeless assailant stabbed a tourist from Chicago with a pair of scissors — using his feet. Police found the victim, 22-year-old Cesar Coronado, lying on the ground and bleeding from his left arm (reportedly the only place he was stabbed).

According to the Miami Herald, Coronado told officers at the scene that he and a friend were simply asking Crenshaw for directions when he lunged at them unprovoked and stabbed him.

However, Crenshaw told officers that he was lying down on Collins Ave. when Coronado came up to him and punched him in the head for no reason. Crenshaw said that he then grabbed the scissors (why they were there remains unclear) with his feet, stabbed Coronado twice, and walked away.

Police were then able to find Crenshaw, a longtime and well-known denizen of the area, after Coronado told them that he’d been stabbed by a homeless man with no arms. With Coronado’s friend backing up his version of the story, officers quickly caught up with Crenshaw nearby, charged him with aggravated battery, and sent him to Turner Guilford Knight Correctional Center on $7,500 bond ahead of his July 18 court date.

As for Coronado, paramedics took him to Mount Sinai Medical Center, where he was able to recover.

Even before the Coronado incident, Crenshaw already had a long list of criminal offenses going back to 2008, including trespassing, disorderly intoxication, vandalism, and battery on police officers, firefighters, and city code inspectors. His most recent conviction was for felony battery of a police officer in 2014, a crime for which he was sentenced to 180 days in jail.

Amateur video of Jonathan Crenshaw painting with his feet on the streets of South Beach.

Apart from his criminal record, Crenshaw is known in the bustling area as a street artist who paints with his feet. According to the Miami New Times, he uses painting supplies given to him by a local art center and specializes in colorful mosaics that sell for up to $60.

And though his art has made him a local fixture, little is known about his life, despite the Miami New Times profile of him from 2011. At the time, he said he was born in Alabama but had moved around repeatedly throughout his rough childhood in which his mother, he claims, tried to feed him rat poison.

Of course, whether or not any of this is true remains unclear, as do the circumstances that caused him to lose his arms, a topic that Crenshaw declined to discuss. Instead, Crenshaw made a number of outrageous claims, including that he’d fathered his first child at age eight and had impregnated singer Gloria Estefan some 200 times.

Meanwhile, Crenshaw also told the Miami New Times, “Sometimes I wish I were dead… I’m not trying to kill myself or anything. But then I wouldn’t have to suffer.” He then explained that much of his suffering had to do with harassment from the city about painting on the streets without a permit.

But now, with an aggravated battery charge against him, Crenshaw is facing some far more serious trouble from the city.

Next, read up on the Florida man arrested for attempting to “barbecue” child molesters. Then, have a look at the story of the Florida man who was killed after his vape pen exploded.