The Asian Giant Hornet, The Bee-Decapitating Hornet That Is The Stuff Of Nightmares

A literally heartless insect known as the "murder hornet" that can sting you repeatedly and land you in the hospital? It's not a nightmare — it's the Asian Giant Hornet.

Meet the Asian giant hornet (Vespa mandarinia) — also known as the Japanese giant hornet or the ominous murder hornet — a large species of insect with a flesh-destroying sting that demolishes pretty much anything in its path. These hornets are most commonly found in rural Japan but have made appearances throughout southeast Asia and, most recently, in North America.

Washington State Department of AgricultureThe Asian giant hornet is so deadly it is commonly referred to as the ‘murder hornet.’

The grape-sized hornets typically set their sights on the hives of neighboring honeybees but they have also been known to kill up to 50 humans every year.

Asian giant hornets are the largest wasps in the world.

How do they take out entire colonies of bees in one fell swoop? By ripping the heads off of their poor, unsuspecting victims one at a time.

The Asian giant hornet sends in a scout to lay down a scent before it invades the bee colony. It makes its way through honey and larvae-rich hives where they proceed to decapitate the bees using sharp mandibles located near their mouths.

The bees don’t stand a chance. Their stings barely pierce the armor of these predatory insects and — in as little as a couple of hours — a small clan of these hornets can wipe out an entire colony of 30,000 bees. Their murderous rampages on bee colonies have earned them the nickname ‘murder hornets’ from entomologists.

Armed with two sets of eyes positioned within its orange head, the murder hornet is especially destructive on account of its stinger. 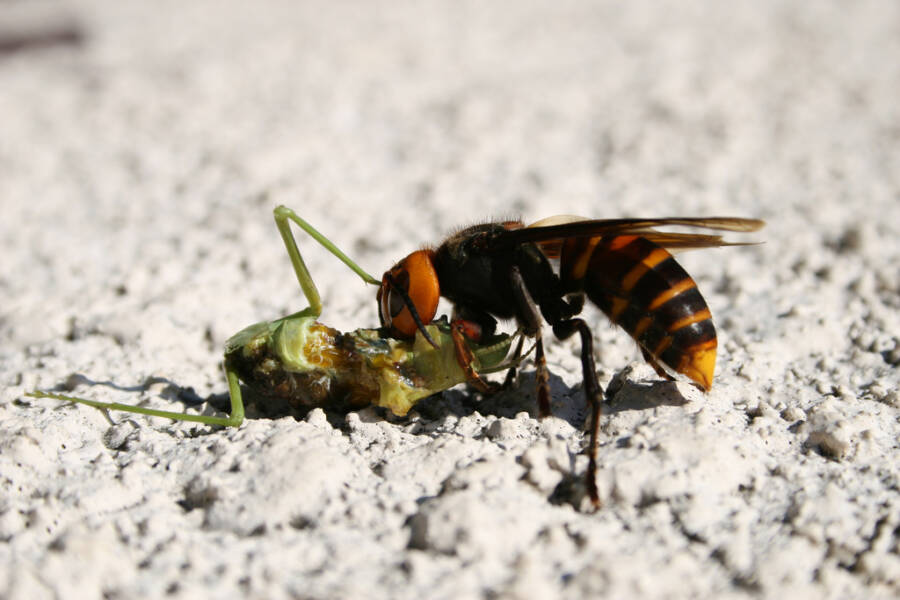 Unlike bees, the murder hornet’s stinger is not barbed, allowing it to remain attached to the hornet after it uses its sting so it can inflict multiple stings on its victims.

This devastating appendage can not only pierce through the fabric of a rain jacket, but it can deliver venomous poison capable of breaking down human flesh and overloading kidney functions.

Perhaps most terrifying is the fact that their stings release venom that is as poisonous as a snake bite. In Japan, they kill about 50 people every year. 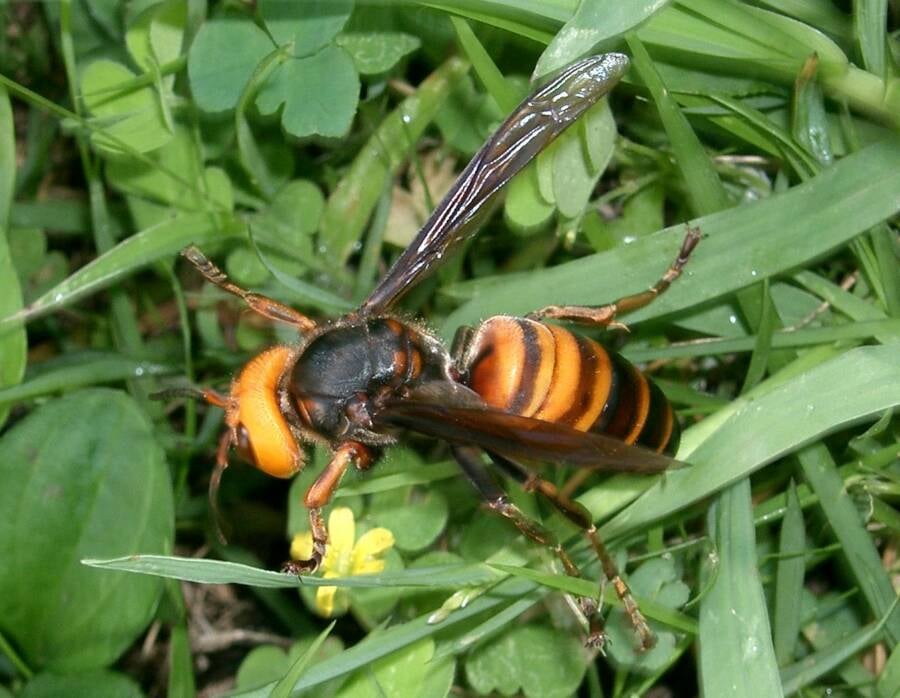 Although this giant hornet species is native to Japan, multiple populations of these insects have now been discovered all the way across the pond in North America as well.

The earliest sighting in the U.S. was in the fall of 2019 around the northwest area of Washington state. Multiple discoveries of wiped out bee colonies with missing heads and carcasses of unusually large hornets uncovered by residents and local beekeepers pointed to the arrival of the murder hornets.

These suspicions were confirmed after Washington resident Jeff Kornelis, who found a dead giant hornet on his property, contacted the state government about the discovery. The state confirmed that the bug was indeed an Asian giant hornet.

In addition to the discoveries in Washington, sightings of these murder hornets also appeared in parts of Vancouver, Canada, around the same time. Entomologist Conrad Bérubé risked his life to exterminate a giant hornet hive discovered on Vancouver Island and collect samples for analysis.

Bérubé suffered multiple bloody stings that left his legs achings for days and described the experience of getting stung by the hornets as the worst stings he has ever been subjected to in his entire career as a bug scientist.

But an analysis of Bérubé’s hornet samples helped confirm the species’ presence in Canada. 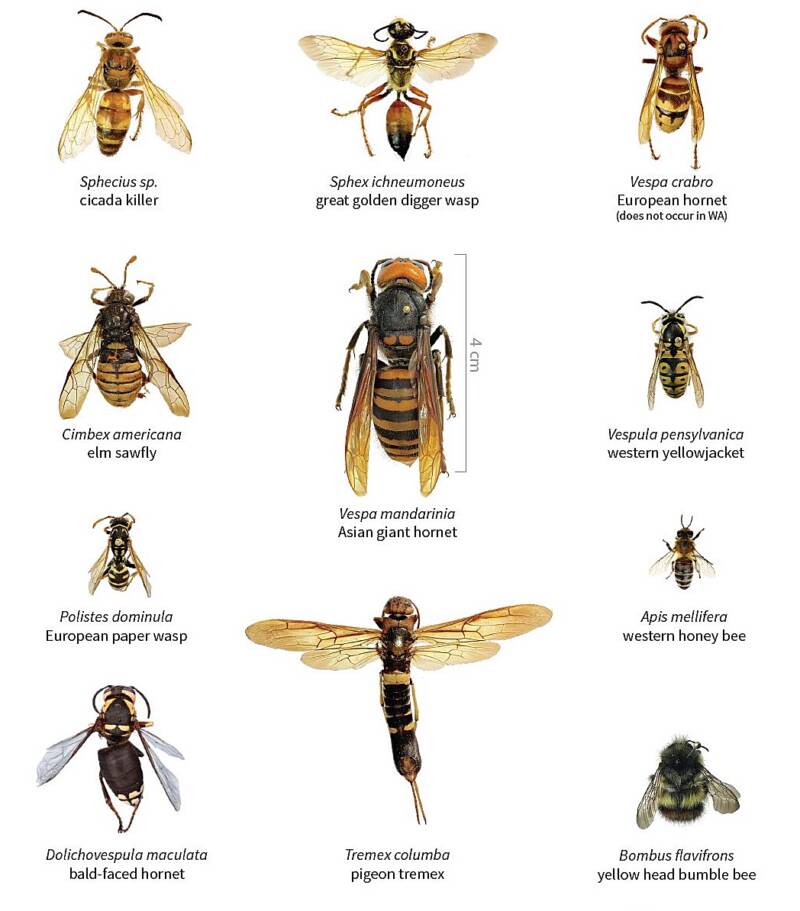 Washington State Department of Agriculture/TwitterA chart depicting size comparison between the giant hornet and other species.

Over the winter of 2019, state officials worked together with local biologists and beekeepers to launch a mass extermination campaign to eradicate the murder hornets from Washington state. They set up traps of kefir and orange juice and employed techniques such as thermal tracking and radio-frequency identification tagging to identify the hornets’ nests amid the state’s wet woodlands.

It was a significant endeavor that could dictate the survival of the local honey bee population.

“This is our window to keep it from establishing,” entomologist Chris Looney explained in an interview about the hunt for the murder hornets. “If we can’t do it in the next couple of years, it probably can’t be done.” 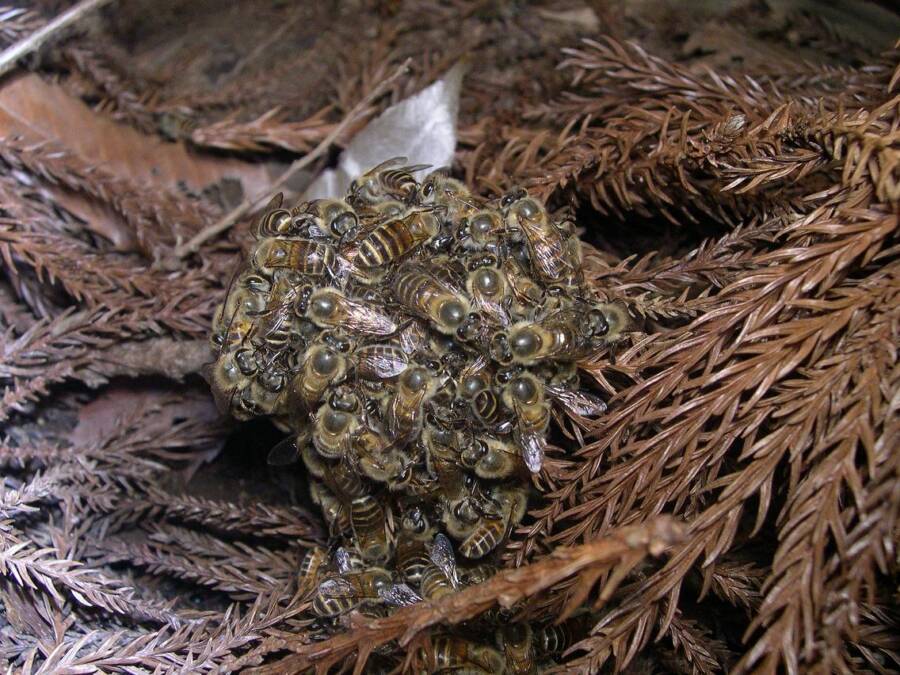 Wikimedia CommonsThe bee colony’s ‘thermal ball defense’ is one way they can protect themselves from the murder hornets.

So, is there no way to defend one’s self in the face of an Asian giant hornet attack? In general, experts suggest remaining as calm and still as possible.

In an interview with Wired, entomologist Steven Martin of the University of Salford recalled an experience he shared with a colleague in which they encountered a hive of these potentially fatal insects:

“You close your eyes, you close your mouth, you grit your teeth because it’s quite frightening. The other guy just couldn’t cope and he ran away, and he got stung several times. I was fine.”

Running would be futile anyway, as the Asian giant hornets have been known to fly up to 15 miles per hour.

Unlike smaller varieties of bees and wasps, the size of the Asian giant hornet — which can grow up to two inches — requires much more space to nest. They usually find spaces in low-lying holes and tree stumps on the ground, making it especially easy for a person to literally walk upon a hive.

As for bees, while they do fight an uphill battle whenever they encounter one of these hornets, they can still deploy a unique defense. Upon noticing the scout inside their colony, worker bees sometimes band together to form a ball around the intruder, cooking it to death with the vibrations of their own bodies. 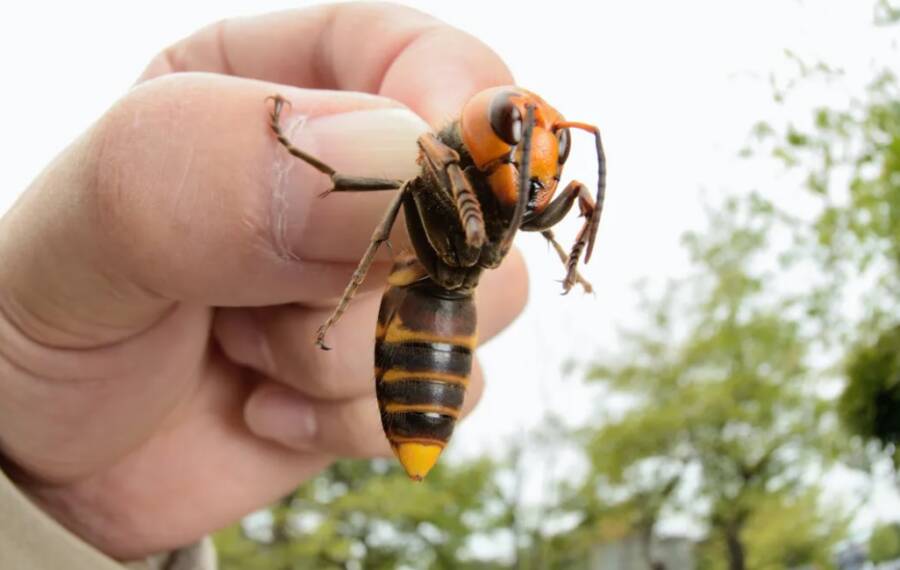 Shin.T/Getty Images PlusEfforts to eradicate the invasive species launched in 2019 in Washington.

Because the Asian giant hornet lacks a heart, the bees crowd around it in an effort to prevent it from pumping blood with its body, constricting it physically with both mass and heat, and suffocating it with the carbon dioxide that naturally builds up within the ball surrounding the scout.

Sometimes this tactic can prevent a swarm from returning to the hive, but if they can’t wipe out the scout, the bees remain pretty much dead in the water.

If you do find yourself on the wrong end of an Asian giant hornet encounter, however, you’ll want to get yourself to a hospital immediately, especially if you’ve been stung repeatedly.

Once the hornet’s stinger has penetrated the flesh, the venom immediately begins to break down skin cells. And due to its size, their stingers can deposit a teaspoon’s worth of poison if you’re attacked by more than one.

Neurotoxins hit the body’s nerves, which results in a searing flash of pain, and it won’t be long before your kidneys begin to shut down. That is, assuming you don’t go into anaphylactic shock before then.

After reading about the Asian Giant Hornet, the forebodingly nicknamed “murder hornet,” learn the ins and outs of colonies in our secret life of bees explainer. Then, check out the world’s most beautiful butterflies.