The Blood-Soaked Story Of Anthony Casso, The Unhinged Mafia Underboss Who Murdered Dozens Of People

Mobster Anthony "Gaspipe" Casso was the Lucchese family underboss during the 1980s and killed up to 100 people before becoming a government informant. 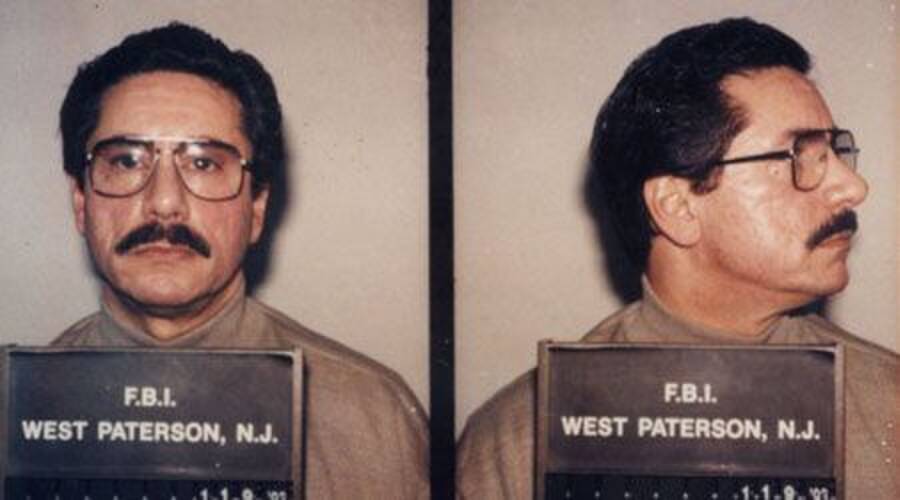 For a few years in the 1980s, Anthony Casso was one of the most ruthless hitmen and Mafia underbosses New York City had ever seen. But his rise in the ranks of organized crime correlated directly to his paranoia.

The Lucchese crime family mobster didn’t care if he violated sacred Mafia codes and killed civilians on the mere suspicion they were informants. In fact, there was nothing Anthony Casso hated more than informants.

But after three years as a fugitive, he was arrested while stepping out of the shower. And in 1993, Casso admitted to killing at least 36 people he suspected of being informants and ordering the execution of 100 more. Then, he talked some more.

Casso had risen from the cobblestone streets of South Brooklyn on his merits as a sleuth who could kill anyone who spoke to the police. But he ended up as an informant himself, imprisoned in a supermax prison in Arizona and sentenced to nearly 500 years behind bars — before he died of COVID-19 in 2020.

Anthony Casso’s Rise In The Mafia

Born on May 21, 1942, in Brooklyn, New York, Anthony Casso grew up on Union Street near the borough’s waterfront. He spent his time shooting birds off tenement buildings and brownstones with a .22-caliber rifle that he’d rigged with a silencer and getting into teenage scraps with his fledgling South Brooklyn Boys gang. 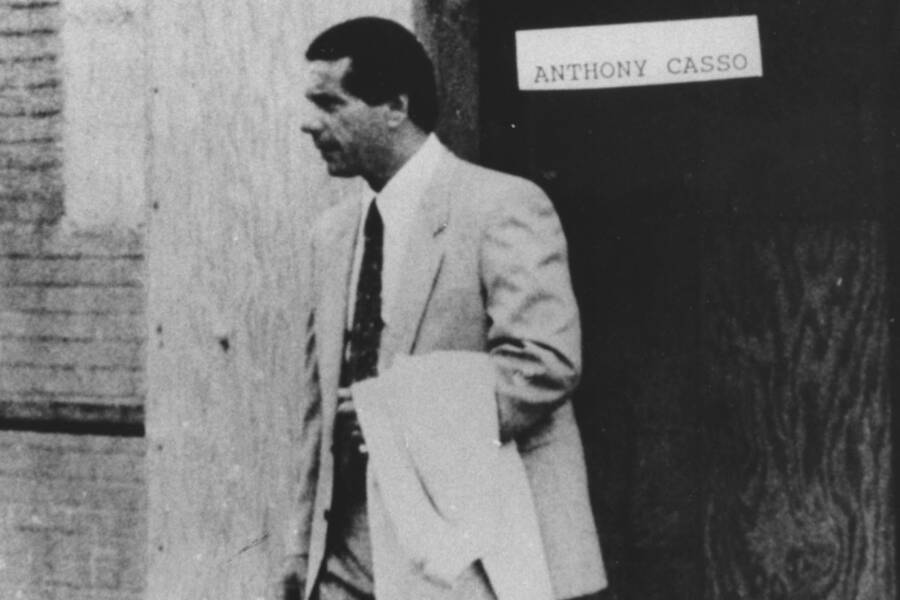 Public DomainA surveillance image of Casso from the 1980s.

His godfather had been a captain in the Genovese crime family. His father had a record for burglaries in the 1940s but also worked honestly as a longshoreman, and he urged Casso to stay out of that life. Instead, Casso admired his father’s past — and named himself “Gaspipe” after his father’s rumored favorite weapon.

Then, at age 21, Casso was poached into the Lucchese crime family. It was the third-largest Mafia outfit in the city behind the Gambino and Genovese families. He began as a loan shark and bookmaking enforcer for Christopher Furnari at the Brooklyn docks. His dark sense of humor revealed itself when a dock worker mentioned having new shoes.

“Gaspipe took over a forklift and dropped about 500 pounds of cargo on the guy’s feet and broke most of his toes,” a detective said. “Afterwards, he laughed and said he wanted to see how good the new boots were.”

While he would be arrested five times between 1965 and 1977 on state and federal charges ranging from assault with a gun to heroin trafficking, all cases ended in dismissals after witnesses refused to testify against him. So Casso rose in the ranks and officially became a made man in 1979 with fellow Lucchese mobster Vittorio Amuso.

Together, they extorted construction contractors and trucking companies for labor union peace, trafficked drugs, and ran gambling rackets. With members of Furnari’s “19th Hole Crew,” they formed a burglary ring comprised of safe-crackers called “The Bypass Gang” — robbing about $100 million by the end of the ’80s.

The Mob’s Most Ruthless Killer

In December 1985, Gambino family captain John Gotti organized a coup against boss Paul Castellano, killing him without approval from The Commission, which regulated such acts among New York’s Five Families. 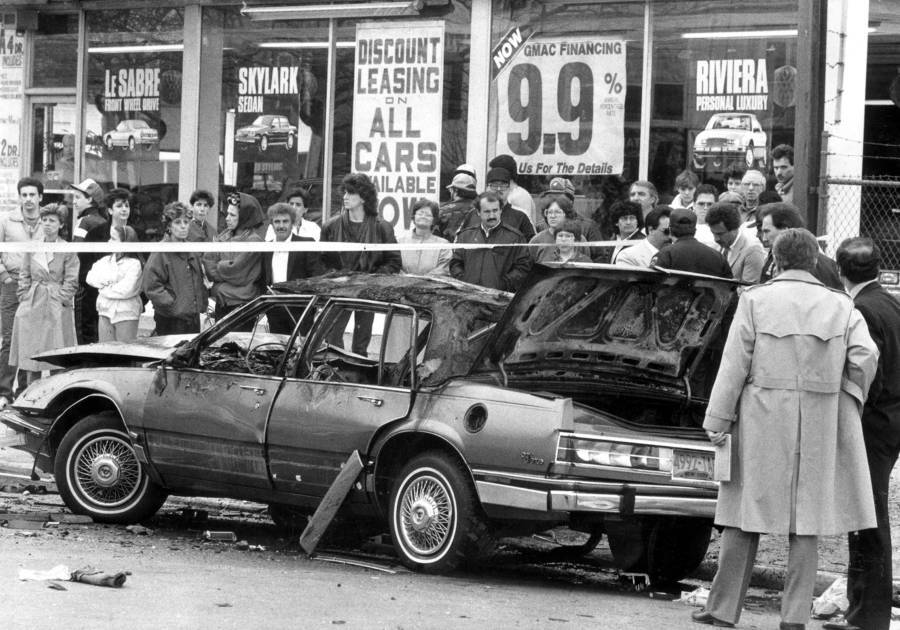 With Gambino capo Daniel Marino as their inside man, Casso and Amuso learned of a meeting Gotti had set at the Veterans and Friends Club in Brooklyn on April 13, 1986. They had an unaffiliated gang rig the Buick Electra of Gotti underboss Frank DeCicco with explosives. When Gotti canceled his attendance last minute, only DeCicco was killed.

Then, when Corallo was convicted of racketeering in November, he made Amuso the boss of the Lucchese family. Amuso officially took charge when Corallo was sentenced to 100 years in January 1987. Casso was made consiglieri and felt more untouchable than ever. Anyone suspected of being an informant, Casso either personally killed or ordered a hit on.

And to stay informed himself, Casso hired NYPD officers Louis Eppolito and Stephen Caracappa. For $4,000 per month, they tipped Casso off about snitches or coming indictments — and would eventually murder a total of eight people for Casso.

Meanwhile, the FBI began surveilling Casso as he spent $30,000 on suits and ran up $1,000 restaurant bills.

By the time Casso was made underboss in 1990, he was killing suspected informants across Harlem, the Bronx, and New Jersey — totaling at least 17 people by 1991. And as Casso began building a $1 million mansion in the Mill Basin area of Brooklyn, bodies kept turning up in garages and car trunks — or else disappearing altogether.

Then, in May 1990, Casso’s NYPD sources tipped him off about a racketeering indictment by the Brooklyn Federal Court. In response, both Casso and Amuso went on the run. A year later, Amuso was caught in Scranton, Pennsylvania. As underboss, Casso made Alfonso D’Arco acting boss, but Casso continued to run things from the shadows.

Over the next two years, Casso ordered some two dozen mob hits while in hiding, even going so far as to order his architect killed when he complained about late payments for the Mill Basin mansion. He tried to have Peter Chiodo, a suspected informant and Lucchese captain, and his sister killed — but both miraculously survived.

How Anthony Casso Became An Informant

Alfonso D’Arco soon realized that Casso wasn’t trying to quell the rise of informants. Instead, Casso was executing individuals with abandon. Fearing for the life of his children, he contacted the FBI and became a government witness. Meanwhile, Casso tried to have a federal prosecutor and judge killed in 1992 and 1993, respectively. 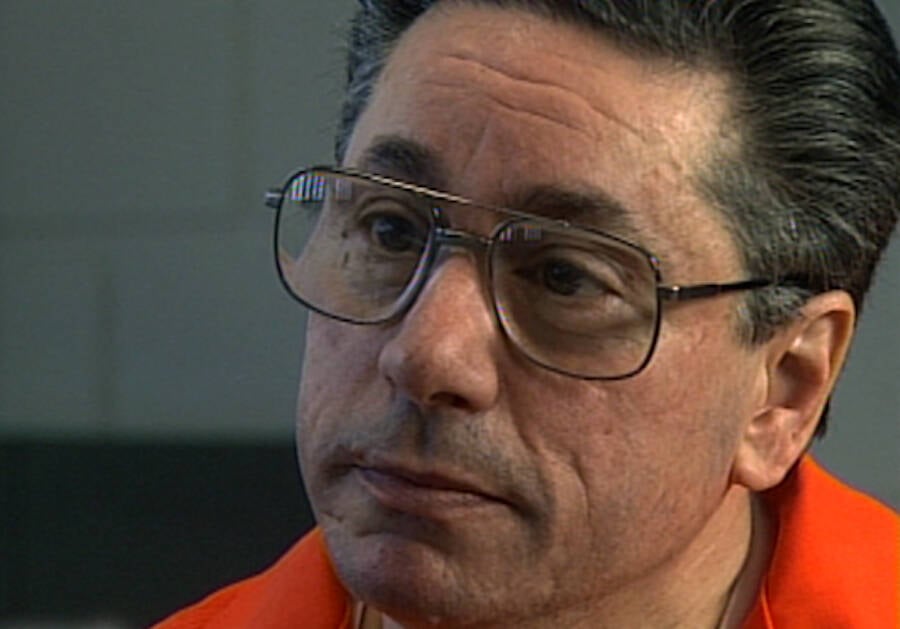 “All of the families are in a state of disintegration, and the instability allows people like Casso to become powerful figures almost overnight,” said Ronald Goldstock, director of the state Organized Crime Task Force.

“He’s not brilliant; he’s a psychotic killer,” said William Y. Doran, head of the FBI’s New York Criminal Division. “I’ve been dismayed and frustrated that it has taken us so long, but we’ll get him.”

Doran’s prediction came true on Jan. 19, 1993, when federal agents arrested Casso as he was coming out of the shower at the home of his mistress in Budd Lake, New Jersey. He pleaded guilty to 72 criminal counts including 14 gangland killings and racketeering charges in 1994. But he wanted a plea deal, and he ratted out figures like NYPD officers Eppolito and Caracappa.

While that earned Anthony Casso a spot in the Witness Protection Program even as he was serving time in federal prison, he was ejected after a series of bribes and assaults terminated the agreement in 1997. In 1998, a federal judge convicted him of racketeering, conspiracy to commit murder, murder, bribery, extortion, and tax evasion — sentencing Casso to 455 years.

In 2009, Casso was diagnosed with prostate cancer while languishing in the United States Penitentiary Tucson in Arizona.

By the time Anthony Casso was diagnosed with COVID-19 on Nov. 5, 2020, he was already wheelchair-bound and plagued by issues with his lungs. On Nov. 28, 2020, a judge rejected his request for compassionate release, and Anthony Casso died on a ventilator on Dec. 15, 2020.

After learning about Anthony Casso, read about the deadliest Mafia hitmen in history. Then, learn about Richard Kuklinski, the most prolific Mafia hitman of all time.