Inside The Revenge Killing Of Frank DeCicco, The Gambino Underboss Who Brazenly Took Out A Don

Frank DeCicco helped John Gotti take over the family by murdering their boss — only to be killed in a bombing months later. 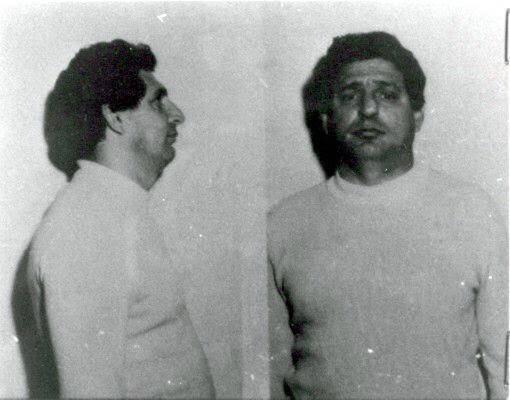 Public DomainFrank DeCicco was brought under the wing of Gambino crime boss Paul Castellano, then he fatefully — and fatally — teamed up with John Gotti against him.

Frank DeCicco was one of the first mobsters in the Gambino crime family to mutiny against their boss in 30 some odd years. Together with John Gotti, DeCicco successfully launched a murder plot against the family’s then-boss, Paul Castellano.

While Gotti rose to power and DeCicco with him as a result of the hit, it would only take four months for fellow mobsters to get revenge on DeCicco for his misdeeds. What followed was one of the most gruesome — and explosive — hits in modern mob history. 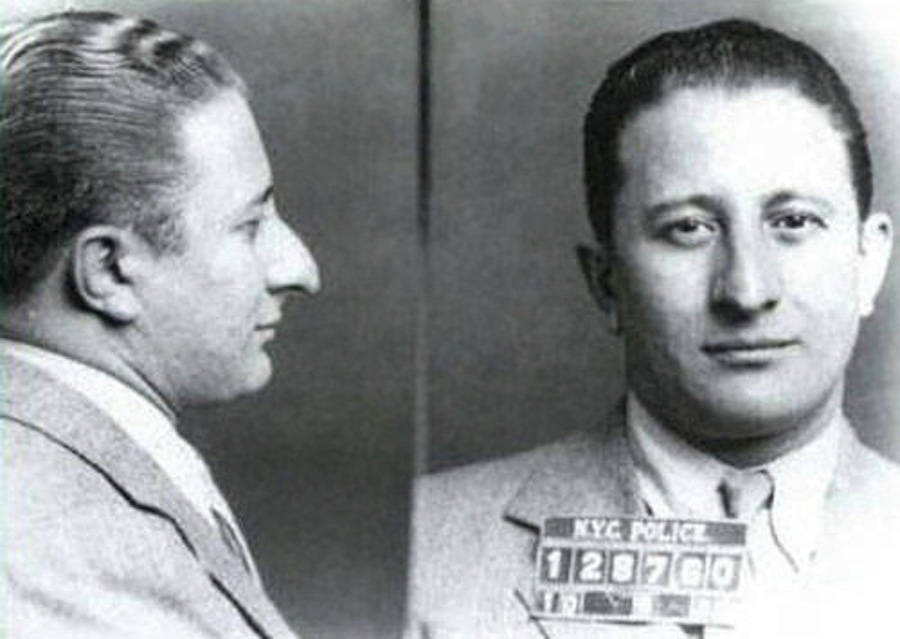 New York Police Department/Wikimedia CommonsCarlo Gambino, the head of the Gambino crime family in New York until his death in 1972.

Frank DeCicco, also known as Frankie Cheech, was born on Nov. 5, 1935, in Brooklyn, New York. His father and uncle were members of the Gambino crime family, one of the most powerful New York mobs of the time under godfather Carlo Gambino.

As he grew up, DeCicco became known for his brain. He too took to a life of crime, joining the Gambino crime family like his father and making a name for himself there. He was well respected by his fellow mobsters thanks to his level head.

Frankie Cheech always knew how to execute a plan.

This was how he caught the eye of Paul Castellano, the so-called “Boss of Bosses.”

Also known as Big Paul, Castellano was Carlo Gambino’s cousin, and in 1976 he became the new crime boss of the Gambino family when Gambino died. 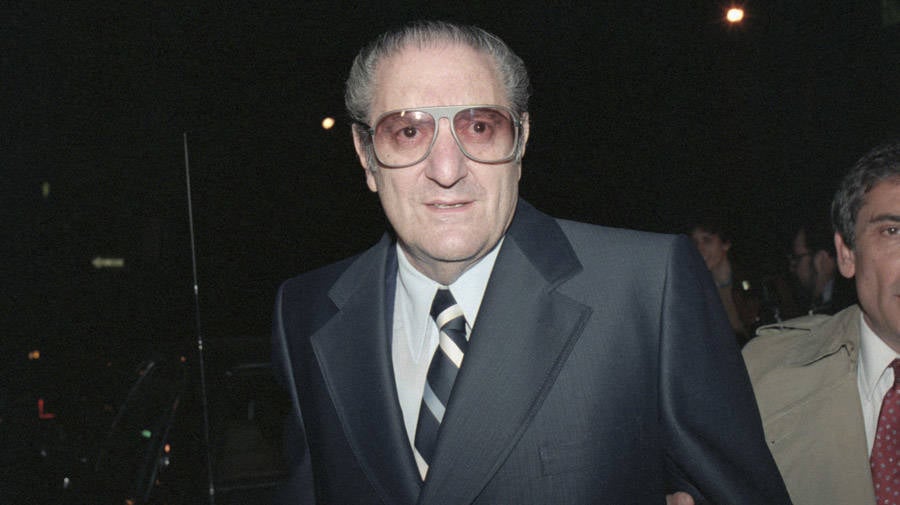 Castellano liked DeCicco and as the young mobster moved up the ranks the feeling became mutual. DeCicco has been described as something of a messy and erratic man, whose car was usually in a state of disarray.

Nonetheless, Castellano brought DeCicco into his labor racketeering, giving him a spot in the Teamsters Union Local 282.

By 1985, Castellano was making big money. Not only had he infiltrated the labor unions, but he had also gotten involved with local gambling and loan-sharking rackets. However, most of this money went straight into his own pockets which didn’t sit well with other members of the family.

One of these members was hotheaded up-and-comer John Gotti.

Gotti, looking for a little extra cash, and a lot more power, started dealing heroin on the side, despite knowing that Castellano was strictly anti-drugs. When the federal government cracked down on Gotti’s dealings, the mobster knew his days were numbered in the crime world.

That is unless he took out Castellano before the mob boss took him out first. 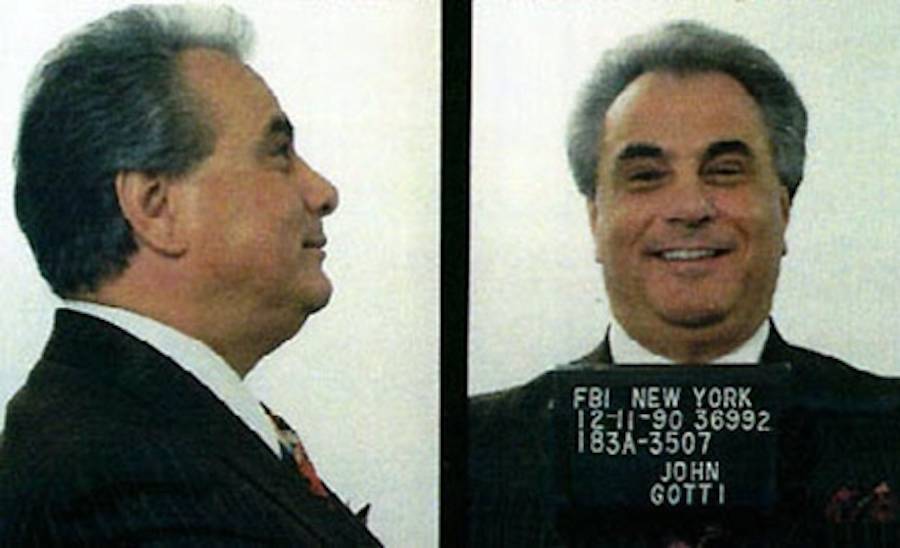 Frank DeCicco was a close friend of Gotti’s and helped him plot the hit against 70-year-old Castellano. Gotti would take over as head and DeCicco as his number two.

As DeCicco told fellow mobster Sammy “The Bull” Gravano days before Castellano was attacked, “Sammy, I’ll tell you what. We’ll give [Gotti] a shot. Let him be the boss. If it don’t work within a year, me and you, we’ll kill him. I’ll become the boss, and you’ll be my underboss, and we’ll run the family right.”

Thus on Dec. 16, 1985, DeCicco lured Castellano to a meeting at Sparks Steakhouse in Midtown Manhattan. John Gotti sat in his car nearby, ensuring that the plan went smoothly. 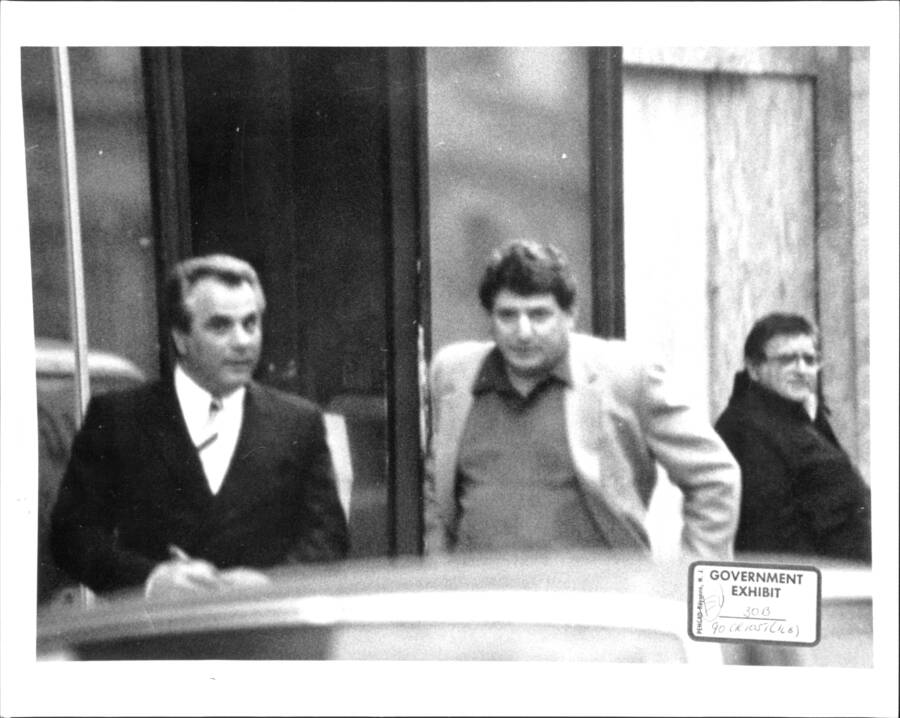 Before the meeting, Castellano and his underboss Thomas Billotti were walking into the restaurant from their limousine just outside. Before they made it into the building, four men in trench coats and Russian fur hats opened fire, killing the mob boss right there on the street.

The 45-year-old John Gotti took Castellano’s place as head of the family, and he appointed Frank DeCicco as his underboss. 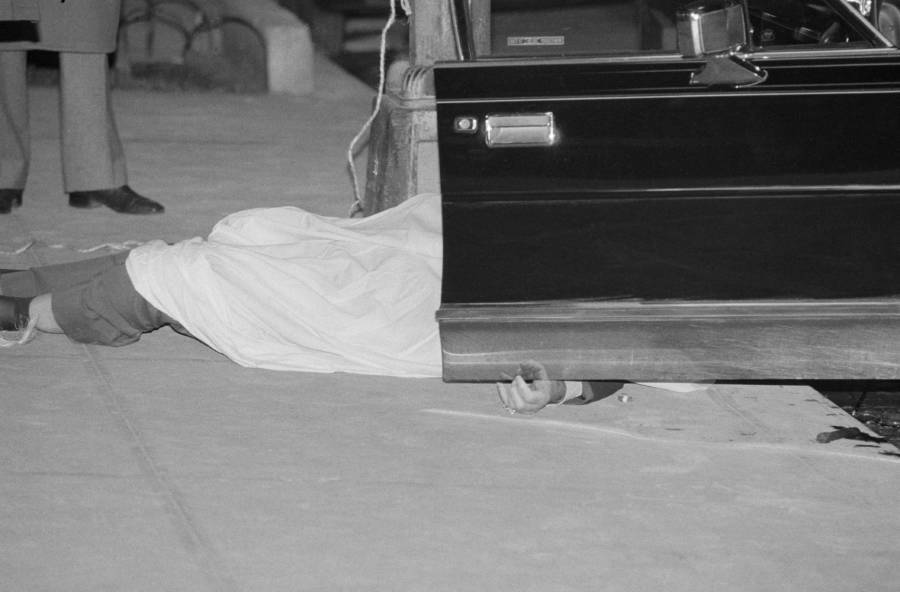 Getty ImagesPaul Castellano’s body next to his limousine on the streets of Manhattan.

Unsurprisingly, the murder of Paul Castellano didn’t go over so well with many other New York mobsters. Only the top tier of mobsters were allowed to sanction a hit on a mob boss, and Gotti had gone behind their backs.

In retaliation, Vincent “the Chin” Gigante, head of the Genovese crime family and an old ally of Castellano’s, organized a hit of his own. He recruited Lucchese underboss Anthony Casso to plan the murder of John Gotti. 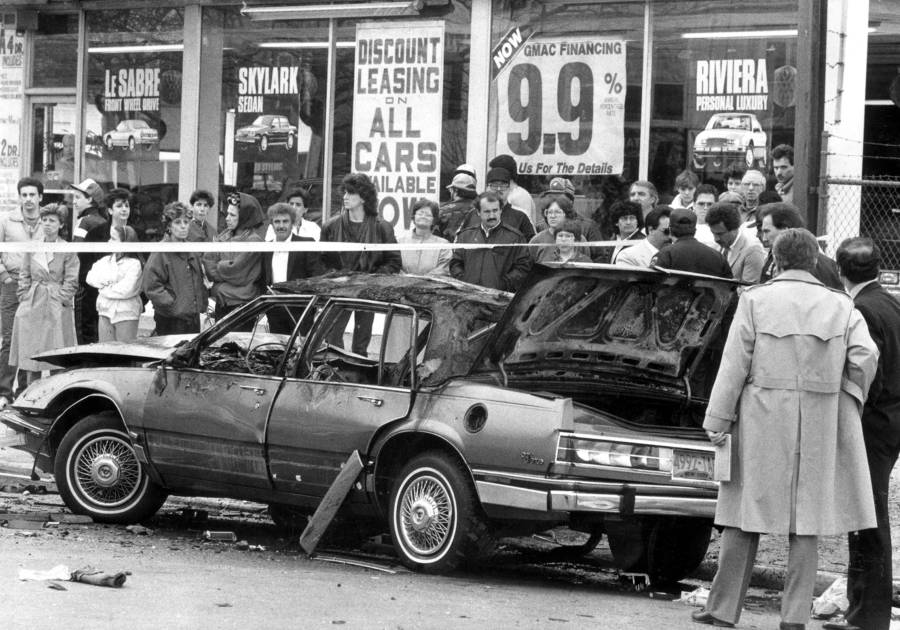 Casso reached out to Herbert Pate, an associate of the Genovese family, to perform the hit. Pate had no connection with the Gambino family so he would not raise suspicion if he was witness to the crime.

Using plastic explosives and the mechanism from a remote-controlled toy car, Pate fashioned a bomb to attache beneath DeCicco’s Buick for the hit. 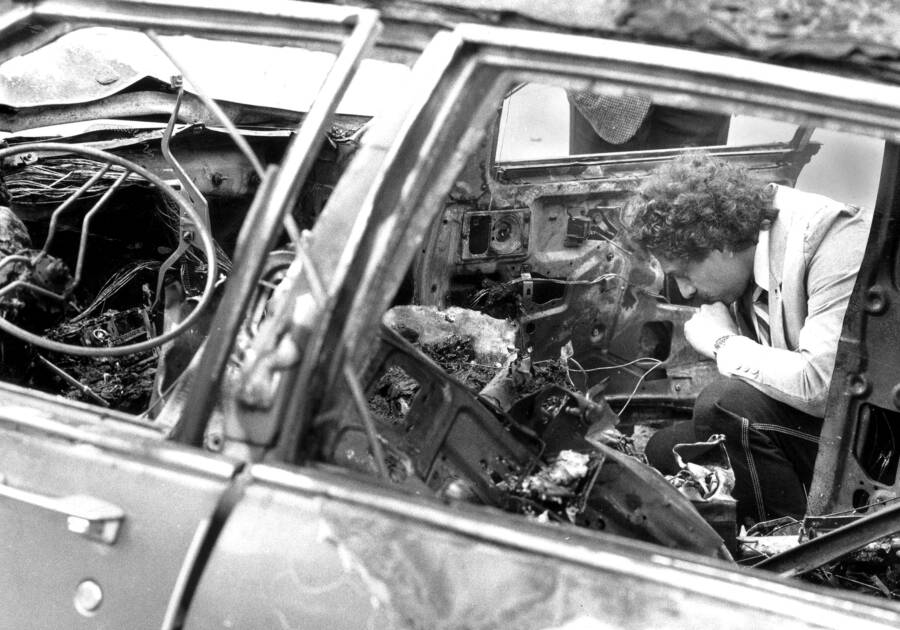 On April 13, 1985, John Gotti was believed to be attending a meeting with underboss Frank DeCicco at the Veterans & Friends Social Club in Brooklyn. Pate walked outside the club holding a bag of groceries and identified DeCicco’s car.

He then deliberately dropped the groceries next to DeCicco’s Buick Electra, leaned down to pick them up, and attached the bomb to the underside of the vehicle without anyone noticing.

When DeCicco left the club, Pate was waiting with his remote control. The hitman watched Frankie Cheech and another man approach the Buick and set off the bomb as soon as they were close enough. The car burst into flames, nearby windows shattered, and DeCicco was killed instantly.

Sammy Gravano was nearby when the hit took place. He later recalled:

“I saw Frankie DeCicco laying on the ground beside the car. With the fire, it could blow up again. I tried to pull him away. I grabbed a leg, but he ain’t coming with it. The leg is off. One of his arms is off. I got my hand under him and my hand went right through his body to his stomach. There’s no ass. His ass, his balls, everything, is blown completely off…I was wearing a white shirt. I looked at my shirt, amazed. There wasn’t a drop of blood on it. The force of the blast, the concussion, blew most of the fluids out of Frankie’s body. He had no blood left in him, nothing, not an ounce.”

The Aftermath of the Bombing 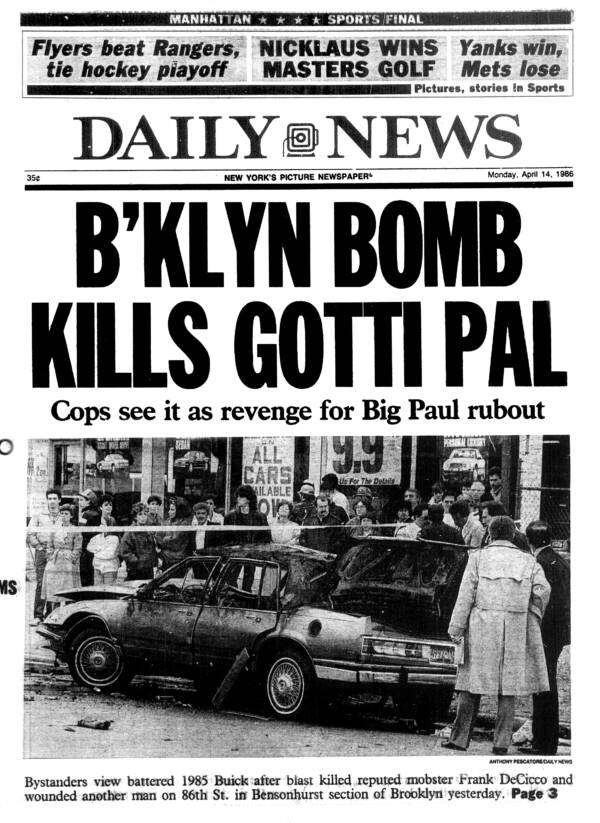 A nearby police officer pulled the two men away from the Buick and extinguished their burning clothes before rushing them to the hospital. Upon their arrival, Frank DeCicco was pronounced dead.

The man who had been with him survived. However, he was not John Gotti. His name was Frank Bellino and he was a 69-year-old friend of the family.

The Gambino crime family was devastated over the loss.

Despite their requests, DeCicco was not given a funeral mass before his burial. Castellano had also been denied this right. For both men, the reasoning was that the public nature of their deaths would attract crowds for all the wrong reasons. 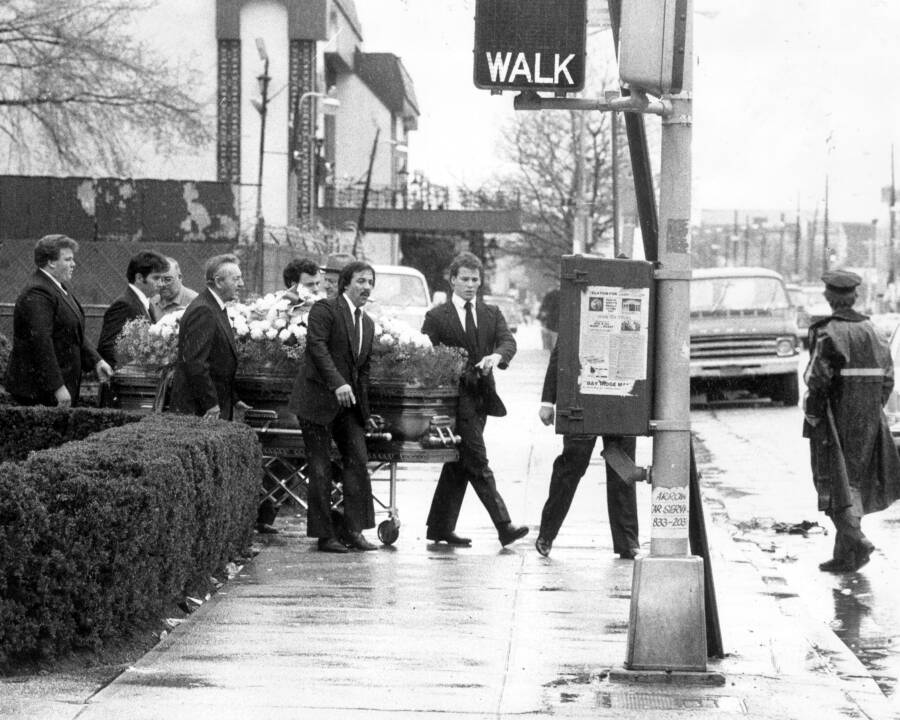 NY Daily News Archive via Getty ImagesThe flower-covered coffin of Frank DeCicco is borne from Scarpaci Funeral Home, Brooklyn, within sight of the spot where he was killed.

Gotti replaced his right-hand man and went on to run the family as the “Dapper Don” until he was eventually convicted of murder and racketeering in 1992. It was Sammy Gravano who testified against the mob boss, resulting in Gotti’s life sentence without the possibility of parole. Gravano would also testify against Gigante in the ’90s, who got 12 years for racketeering. He would die in prison in 2005.

As for Pate, the man who killed DeCicco, he was sentenced to 12 years for unrelated charges.

In the end, all the men involved met fates familiar to any man in the mob.

Want to know more about the legacy of the Gambino crime family? Check out this article about John Gotti Jr. who took over his father’s position after the mob boss was sent to prison. Then, meet one of the family’s most talented hitmen, Roy DeMeo.