The Life Of Assata Shakur, The First Woman On The FBI’s Most Wanted List

Radical Politics and the Relearning of History

College life in the mid-1960s was quite tumultuous, and Assata Shakur’s experience there was no exception. By 1966, Shakur was involved with anti-war student groups and dabbling in the growing Black Power movement.

This strain of politics eschewed Martin Luther King Jr.’s approach toward racial reconciliation and healing, preferring the militant language of the Nation of Islam and the Black Panther Party, both of which embraced black separatism and swift, violent change.

Instead of hoping to appeal to the better angels of mainstream whites’ nature, these young activists believed in direct action to forcibly change institutions they believed held back progress.

For example, Shakur’s first arrest came in 1967, after she chained herself to a campus building and held a sit in to demand more black faculty at CCNY. Around this time, she married a fellow student and activist named Louis Chesimard, but they divorced just three years later, right around the time she traveled to Oakland, California, to meet (and join) the Black Panthers.

Shakur was enthusiastic about helping the BPP open up East Coast operations and volunteered to run their famous free breakfast program in New York. This program was part of the effort to establish a physical presence in black neighborhoods and recruit likely-looking young radicals.

It was, in other words, the thin end of a wedge that sought to create an insular, fully aware black youth who could resist the white society around them. In Shakur’s opinion, this was great, but the Party lacked focus on what to do after they got their foot in the door.

According to her autobiography, the Panthers were well-intentioned, but terribly ignorant about American history. They knew, she claimed, a lot about socialism and radical politics, but very few had heard about Harriet Tubman or Marcus Garvey, names Assata Shakur had learned at her Aunt Evelyn’s knee years before.

One of the crucial elements of developing a radical mindset, according to Mao Zedong’s “Little Red Book,” is for the activist to actively purge ideas about the past and to relearn history through the lens of the oppressor/oppressed dynamic. Everything in history must come to be seen in the context of revolutionary struggle, and all of the organizer’s energy must focus on teaching the “oppressed” masses that the system will never be fair to them, and that they must break off from that system and build a new society.

Assata Shakur inhaled this philosophy and eventually came to find the BPP’s relative moderation too frustrating to continue with. By 1971, she had joined the Black Liberation Army and the Republic of New Afrika, two uncompromisingly violent and extremist separatist groups that planned to essentially refight the Civil War by splitting the states of Alabama, Mississippi, Louisiana, Georgia, and South Carolina from the Union and declaring an independent black nation.

Crime in the Name of Revolution 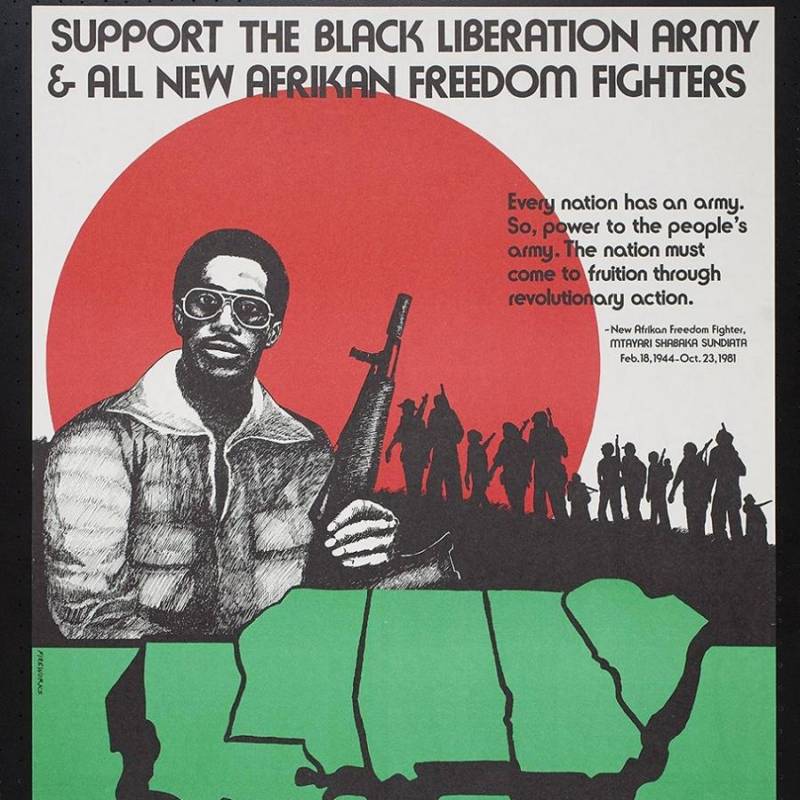 The war for a North American black homeland began, at least for Assata Shakur, with a series of robberies up and down the East Coast. In April of that year, Shakur and some friends tried to rob a man in his hotel room, only to find him armed and in the mood to fight. Shakur was shot in the belly, and wound up facing charges for attempted robbery and reckless endangerment.

Soon enough, Shakur was out on bail and committing bank robberies to finance her group’s activities. One year after the hotel robbery, Shakur’s name came up in connection with a grenade attack on a New York City police car that wounded two officers.

Around the same time, somebody – thought to be Assata Shakur – shot a Brooklyn police officer serving a warrant, and somebody else – again, probably her – got $89,000 out of a bank robbery in Brooklyn. She may also have robbed a church around that same time.

Incident on the New Jersey Turnpike

All of this was easy to justify, according to Assata Shakur. Using her intellect to rationalize everything that she and the group she now led did, Shakur had a ready-made excuse for stealing, robbing, and trying to murder police officers.

The liberation politics of her college days had taught her that she lived in a violent white-supremacist society, one that oppressed women as well, and that as a black woman she was the ultimate victim of institutional racism and sexism.

The system was fundamentally unfair, in other words, and so she had no choice but to pursue revolutionary violence. Stealing and killing can be excused in the service of a higher goal, and starting the Black Power feminist revolution was the cause that Shakur had apparently decided to hitch her flag to.

At around 1 a.m., on the morning of May 2, 1973, two full years into the BLA’s crime spree, New Jersey State Trooper James Harper stopped a speeding car with a broken taillight on the New Jersey Turnpike. During the stop, he asked the male driver of the vehicle to step out and, according to the later testimony of another officer who arrived as backup, found a gun inside the car.

What happened next is the subject of disagreement, but it ended with one member of the BLA dead, Shakur wounded, and Trooper Harper killed with two shots to the head from his own gun. The surviving BLA members fled the scene, only to be picked up later that morning by the multi-state manhunt that had quickly been organized.

For all of her revolutionary talk, Assata Shakur was apprehended peacefully at a rest stop, where she approached the police with her hands up, despite the bullet wounds in her arms.