In 1905, August Vollmer became town marshal of Berkeley, California. In just a few years, he transformed his department into the first modern police force — and laid the groundwork for the heavily-armed police of today. 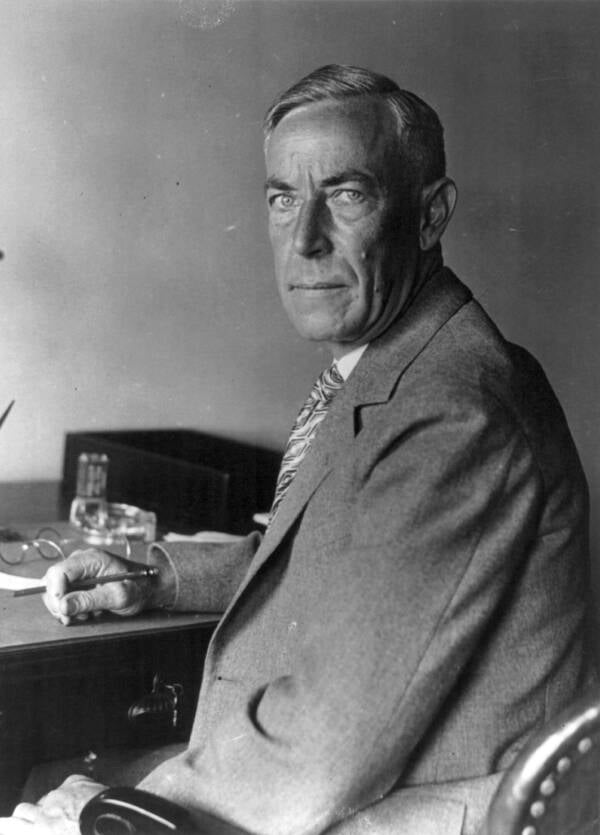 Wikimedia CommonsAugust Vollmer was Berkeley, California’s longtime chief of police and pioneered the use of military methods in the American police force.

Armored police and military-style raids have become a terrifying and all-too-common fixture in the modern United States, but many people may not know that the nation’s history of police militarization can be traced in large part back to one man.

August Vollmer was once renowned for his long tenure as the chief of police in Berkeley, California, where he pioneered new methods of investigation and organization along with innovative technological advancements. These developments were adopted by police departments across the country and cemented him as the so-called “father of modern policing” in America.

But there was much more to August Vollmer than radios and rank tables. More than any other singular individual, Vollmer is responsible for the transformation of American police into the militarized forces we see today.

August Vollmer Is Inspired By War 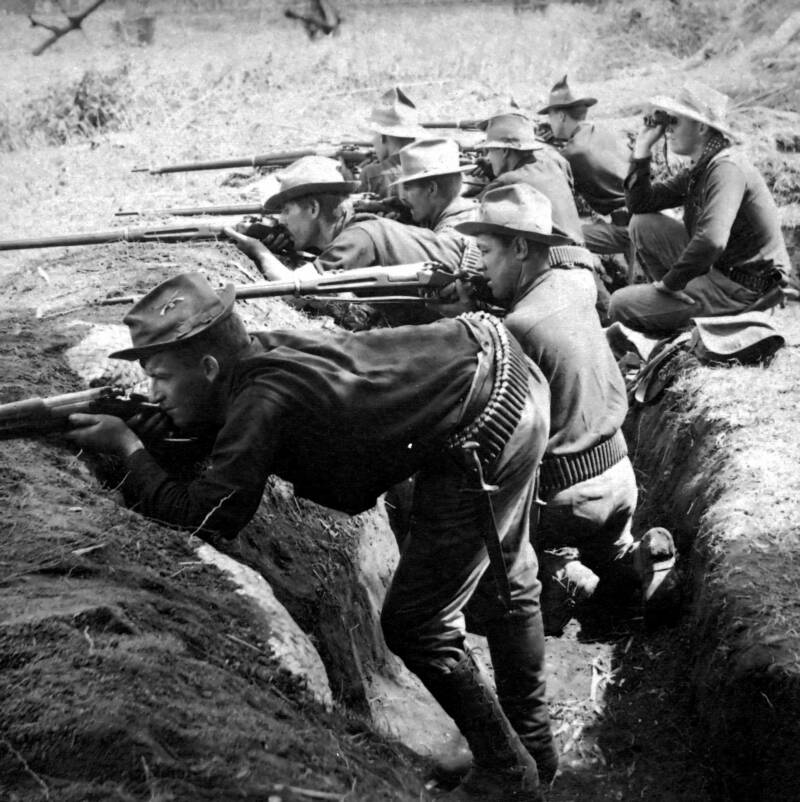 August Vollmer was born to German immigrants in New Orleans in 1876 and relocated to Berkeley with his mother after his father’s death. There, he received a sixth grade education and worked various jobs before he enlisted in the U.S. Army in 1898, a pivotal year in the nation’s history.

The United States was a recent entry into imperial expansionism at the turn of the 20th century and had only recently seized Spain’s last few colonies for its own empire. These included Puerto Rico, Guam, and most significantly, the Philippines.

The Filipinos had allied with the U.S. against their Spanish colonizers out of convenience, but when their war against the Spanish ended, it became clear that the Americans now considered themselves to be the new masters of their nation. A Filipino guerrilla campaign was consequently launched against the Americans which would last, in one form or another, for almost 16 years.

The American occupiers responded in novel and savage ways, including civilian attacks, establishing concentration camps, and even launching a genocide perpetrated against the Moro people in the southern part of the country. 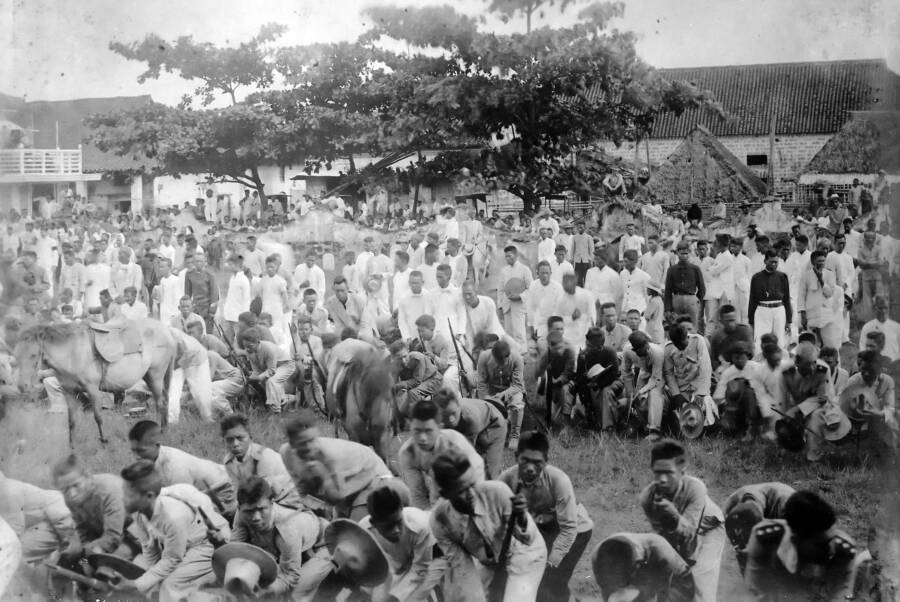 Wikimedia CommonsWhen Filipino forces surrendered, soldiers like August Vollmer were called upon to hunt down the holdouts.

The Americans organized elite mobile units to track down, surround, kill or capture bands of resistance fighters. They gathered intelligence on these fighters through the recently established Military Information Division branch of the United States Army. And among those servicemen hand-picked to carry out this mission was young August Vollmer.

His experience as a member of these mounted death squads would influence his career in policing. As he told police officers decades later:

“For years, ever since Spanish-American War days, I’ve studied military tactics and used them to good effect in rounding up crooks. After all we’re conducting a war, a war against the enemies of society and we must never forget that.”

He Brought The Army Into Berkeley 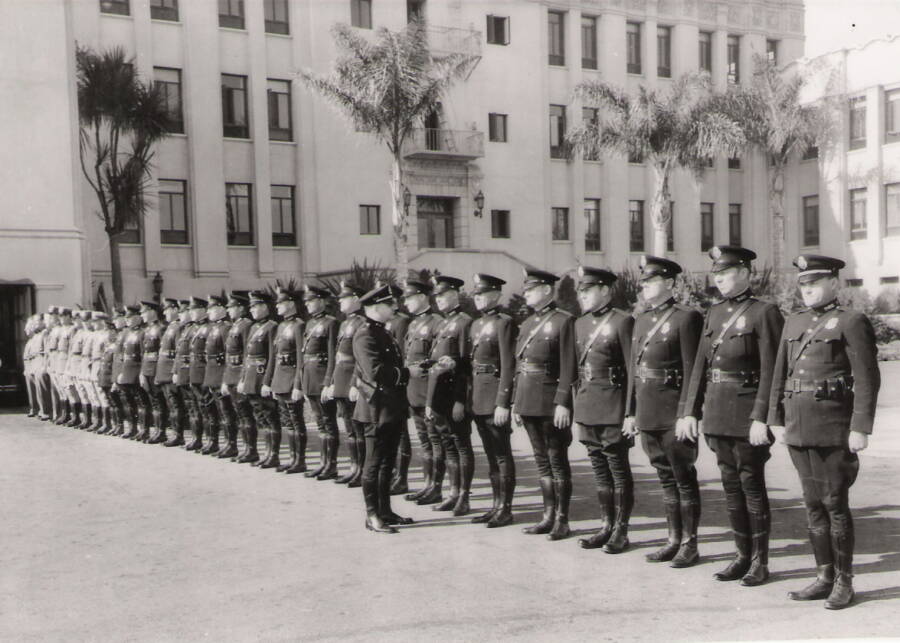 Wikimedia CommonsBy the late 1930s, police across the United States marched in and wore uniforms inspired by those worn in the military.

When Vollmer returned to Berkeley in 1900, he brought with him ideas he had learned in war. He knew how to hammer men into a rigid hierarchy and he knew how best to use modern science to suppress anyone who stood in the way of a well-drilled band of agents.

After a short stint as a postal worker, in 1905 he was encouraged to stand for election as town marshal of Berkeley by Friend Richardson, a newspaper editor and future governor of California. Despite his youth, Vollmer won easily, in part because of his military background, and he won the electorate by a three-to-one margin.

The position in those days had more in common with that of a night watchman than it did a law enforcement officer, however. At this time, few towns in the U.S. had police forces. Larger cities like New York, where the municipal police had been active since 1845, were the exception, and police officers had a reputation for thuggish behavior and corruption.

Before the 20th century, most police didn’t even carry firearms, had only a basic understanding of the law, and often underwent no training at all.

Vollmer got right to work expanding and strengthening his new agency. In 1910, he provided his small force with uniforms, badges, bicycles, revolvers, and sledgehammers for breaking down doors. The following year, he upgraded his squads to motorcycles before moving on to cars equipped with radio communications. 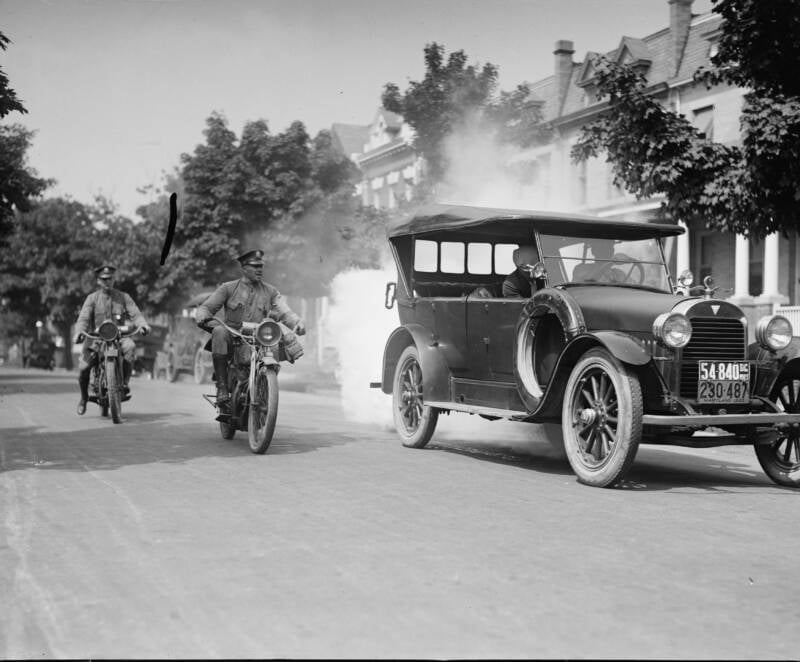 Library of CongressMotorcycles were valued by police forces for their simplicity, sturdiness, and ability to chase down cars ever since August Vollmer first mounted Berkeley police on them in 1911.

He also transplanted marksmanship standards and the practice of pin-mapping, which was using pins on maps to track activity and effectively deploy his mounted police. He even enlisted hundreds of Spanish-American War and American Civil War veterans to keep order after the 1906 San Francisco earthquake. He was also the first to employ the use of polygraphs in criminal investigations.

But there was another tactic Vollmer employed in generating his militarized police: science — or at least one version of it. As he put it, “Criminology will be on solid ground when it follows in the footsteps of medical science.”

Because in truth, Vollmer was far more than an avid militarist. He was also an enthusiastic eugenicist. 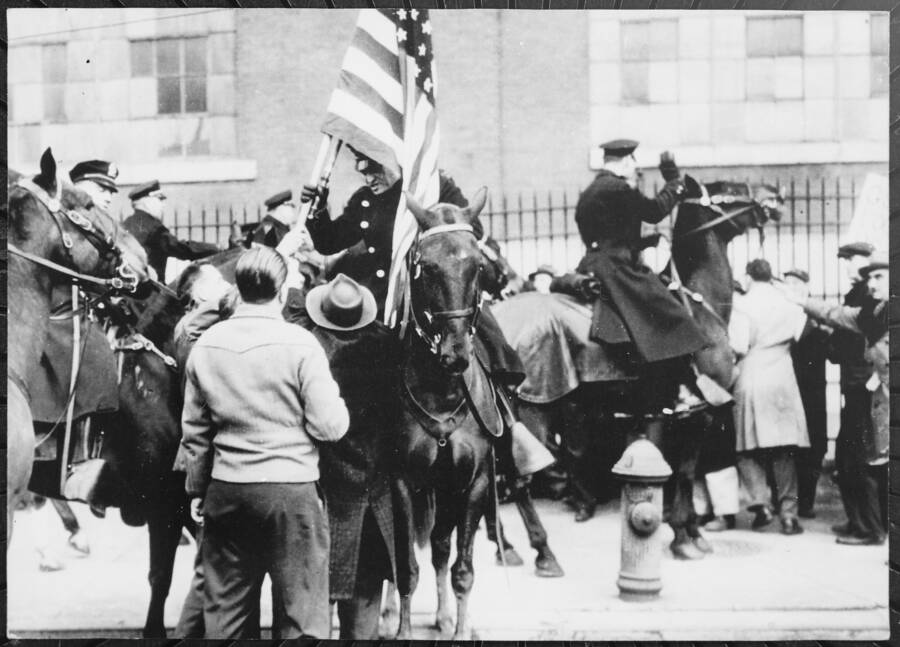 Wikimedia CommonsHorses have long been valued for police work, but Vollmer’s adaptation of strategic deployment transformed units like these into highly mobile forces for breaking up riots and strikes, like this one in 1946.

At its core, eugenics was the practice of categorizing individuals and groups through the identification of “superior” and “inferior” traits, with the presumption that the source of such traits were the result of “superior” and “inferior” genes. A consequence of eugenics was the belief that not only could supposedly superior groups become stronger by culling weaker individuals, but that they also had a moral obligation to do so.

This set of beliefs was championed as legitimate science in the early 20th century, and it was routinely used to justify racist policy and practices. Despite his eugenic proclivities, however, Vollmer would hire one of the first-known Black police officers in the U.S. He also favored desegregation and opposed the criminalization of drug use.

Vollmer’s seeming open-mindedness here can be drawn back to his idea of “criminality.” To Vollmer, criminal activity was more like a hereditary disease than it was a racial trait. If crime was a disease, he believed, then the police were the surgeons. The only solution was to viciously excise criminality with military precision and force.

Nevertheless, in his Berkeley police academy, Vollmer taught his forces that there were racial “types” of criminals and that “racial degeneration” often contributed to crime. His disturbing solution to this was to establish vigorous systems of racial and physical profiling.

This idea caught like wildfire. Police chiefs in cities as far away as Savannah, Philadelphia, and Detroit had already been inspired by Vollmer and begun drilling their own police like soldiers, many of whom were also veterans of the Philippine War.

But what Vollmer now proposed was far more radical: militarized, “scientifically”-run forces that made use of criminal files and databases; forensic analysis of blood, soil, and fiber; rapid communications; and most of all, military tactics pulled from the Army’s latest combat manuals.

Vollmer became a sensation in political, military, and police circles, and eventually even a household name. As he appeared in a series of short silent films, the policeman-turned-soldier had arrived in America. 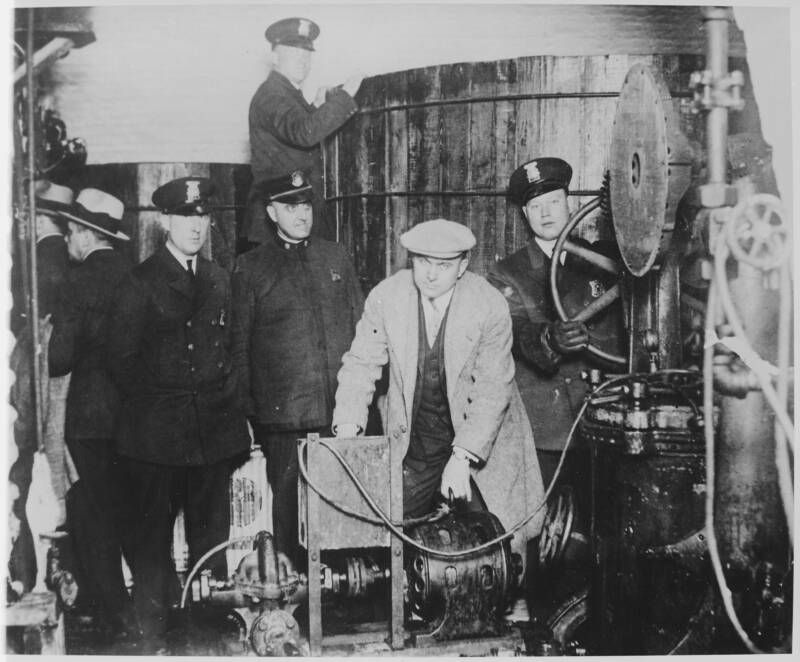 Wikimedia CommonsDuring Prohibition, it fell to local police like these Detroit officers to enforce an unenforceable law.

By 1920, Congress had just passed the Volstead Act, which made alcohol illegal and launched the era that would come to be known as Prohibition in America. Lacking a federal enforcement agency, however, it fell to Vollmer’s hardened police forces in cities like Berkeley, Los Angeles, Chicago, and many more to form the front line in the war on alcohol.

The wrinkle was that August Vollmer opposed Prohibition.

One of Vollmer’s many complexities was that he was also unusually forward-thinking on the issues of drugs, alcohol, and sex work. Decades before research proved that the War on Drugs was doomed to failure, Vollmer wrote:

“Drug addiction, like prostitution, and like liquor, is not a police problem; it never has been, and never can be solved by policemen. It is first and last a medical problem, and if there is a solution it will be discovered not by policemen, but by scientific and competently trained medical experts.”

The ensuing effort to enforce Prohibition through federal and local police forces was a disaster. Even Vollmer’s regimental police agencies suffered rampant corruption and criminal activity, most notably in Chicago, where police were some of Al Capone’s most useful operatives in running his bootlegging empire.

Ironically, this sowed even more interest from Federal and state officials in Vollmer’s ideas on law enforcement. In an effort to reduce corruption among their forces, officers were armed with military-grade weapons like the Thompson submachine gun and the Browning Automatic Rifle. Radio communications became standardized across police forces and records systems were established to coordinate operations. 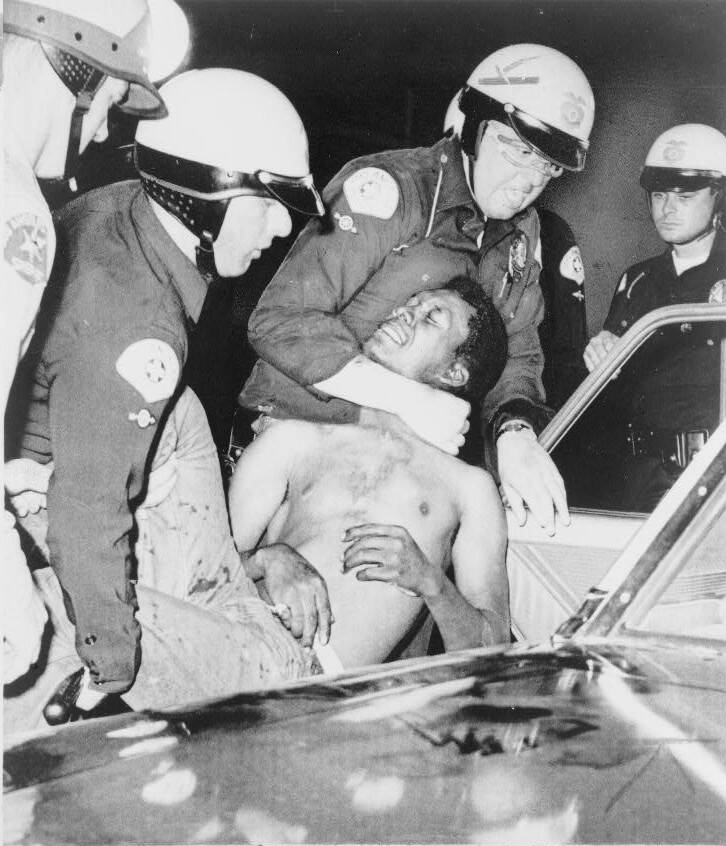 Wikimedia CommonsThe employment of riot control techniques based on infantry tactics has been widespread for decades, including during the 1968 Watts Riots pictured here.

The failure of Prohibition was all that was needed for Vollmer’s policing innovations to be cemented nationwide. In 1931, he contributed substantially to the Wickersham Report, which was an analysis on the shortcomings of the Volstead Act. In it, Vollmer argued that Prohibition could be nothing but corrupting to police and civilians alike.

Vollmer retired from the Berkeley Police Department in June 1932 to devote himself to writing, lecturing, and teaching. His reforms mutated beyond even what he had argued for as J. Edgar Hoover’s FBI formed the backbone of increasingly violent and close-ranked police departments. Vollmer’s methods would be used to suppress political activists and social justice reformers.

In the following decades, mounted, heavily armed, and well-drilled police officers would conduct large-scale raids of whole neighborhoods, and be deployed to quash riots and demonstrations with alarming frequency.

But Vollmer didn’t live to see much of the dark results of his work. In November of 1955, while suffering from Parkinson’s disease and cancer, he said to his housekeeper, “I’m going to shoot myself. Call the Berkeley police.” Vollmer then exited his kitchen and fired a single bullet into his right temple. He was 79 years old.

The militarization of police in the United States was the work of many hands, and if it was possible for August Vollmer to witness the current consequences of his legacy, he might well be horrified. But the fact remains that from the first moment Vollmer put on the badge of Berkeley town marshal, he believed that the brutally repressive tactics he’d obtained through his military experience was exactly what was needed to shape the American police force of tomorrow.

After this look at August Vollmer, learn about the 1969 raid on a Black Panther Party headquarters that only inspired American police to militarize further. Then, see harrowing images of the Philippine-American War, the forgotten imperial war of the United States.