The Mayor of Austin had some choice words for a man angered by women-only screenings at an Austin, Texas, movie theater. 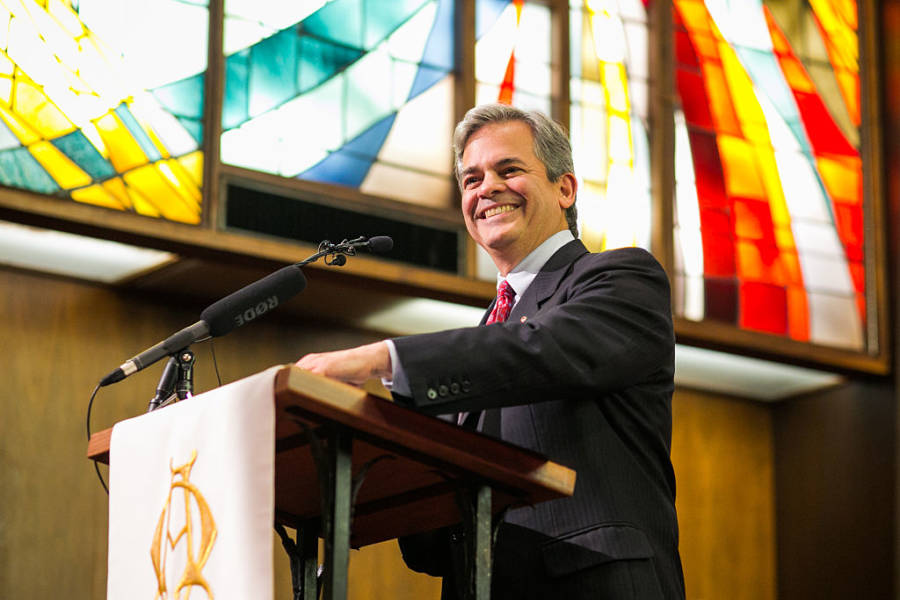 The Alamo Drafthouse is a quirky movie chain that likes to do things a little differently — like when they drove their customers into the middle of the woods after a horror movie.

Last week they announced an all-women screening of the new Wonder Woman movie in order to celebrate the feminist figure.

“The most iconic superheroine in comic book history finally has her own movie, and what better way to celebrate than with an all-female screening?” the post read. “Apologies, gentlemen, but we’re embracing our girl power and saying ‘No Guys Allowed’ for one special night at the Alamo Ritz. And when we say ‘People Who Identify As Women Only,’ we mean it. Everyone working at this screening — venue staff, projectionist, and culinary team — will be female.”

Surprise, surprise: the angry men of the world were displeased.

Luckily for the rest of us, there’s a brilliant person working the theater’s social media: 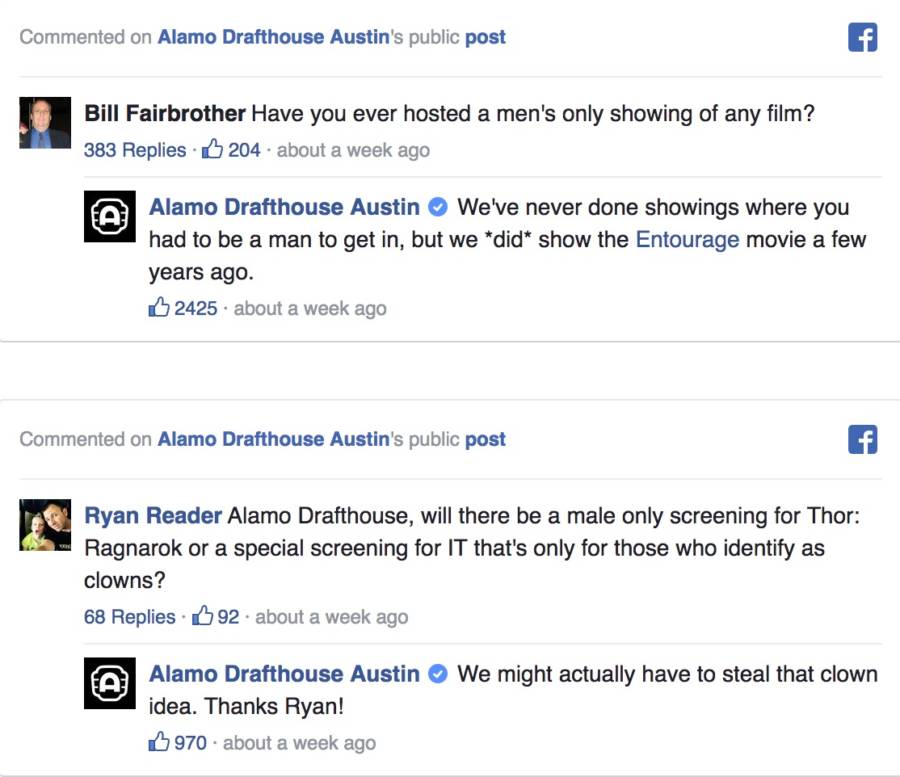 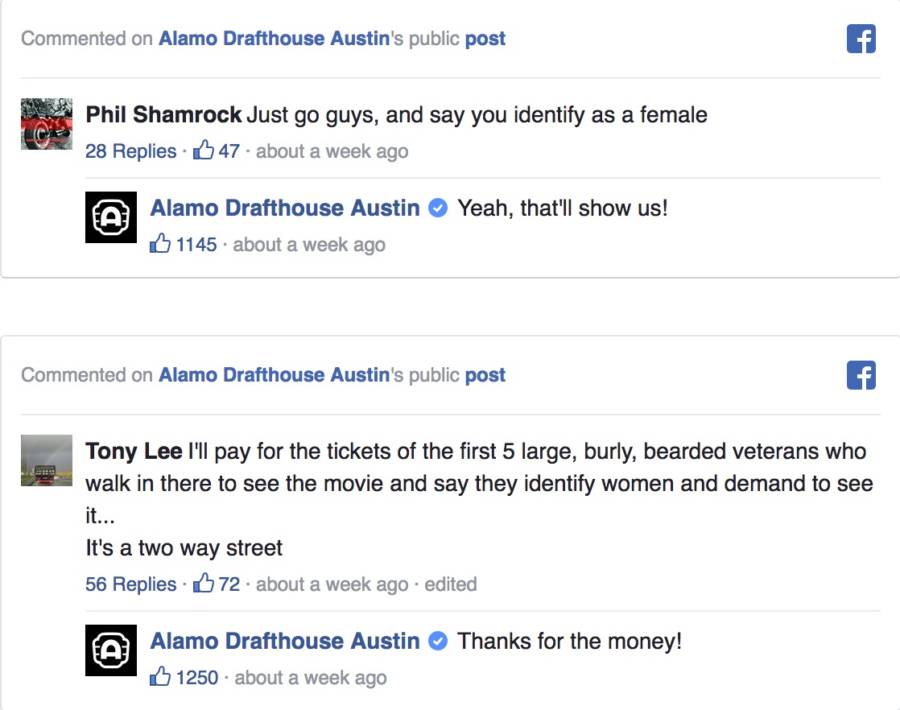 Taking it one step further, the chain added another all-women screening of the movie in Austin and planned more in different cities around the country — all of which have also sold out.

But Alamo employees aren’t the only ones who can make sexists look stupid.

Austin Mayor Steve Adler also joined in on the fun after a Richard A. Ameduri sent him this email:

“I hope every man will boycott Austin and do what he can to diminish Austin and to cause damage to the city’s image. The theater that pandered to the sexism typical of women will, I hope, regret it’s decision. The notion of a woman hero is a fine example of women’s eagerness to accept the appearance of achievement without actual achievement. Women learn from an early age to value make-up, that it’s OK to pretend that you are greater than you actually are. Women pretend they do not know that only men serve in combat because they are content to have an easier ride. Women gladly accept gold medals at the Olympics for coming in 10th and competing only against the second class of athletes. Name something invented by a woman! Achievements by the second rate gender pale in comparison to virtually everything great in human history was accomplished by men, not women. If Austin does not host a men only counter event, I will never visit Austin and will welcome it’s deterioration. And I will not forget that Austin is best known for Charles Whitman. Does Austin stand for gender equality or for kissing up to women? Don’t bother to respond. I already know the answer. I do not hate women. I hate their rampant hypocrisy and the hypocrisy of the ‘women’s movement.’ Women do not want gender equality; they want more for women. Don’t bother to respond because I am sure your cowardice will generate nothing worth reading.

Despite Ameduri’s suggestion, Adler did respond. And it was great.

I am writing to alert you that your email account has been hacked by an unfortunate and unusually hostile individual. Please remedy your account’s security right away, lest this person’s uninformed and sexist rantings give you a bad name. After all, we men have to look out for each other!

Can you imagine if someone thought that you didn’t know women could serve in our combat units now without exclusion? What if someone thought you didn’t know that women invented medical syringes, life rafts, fire escapes, central and solar heating, a war-time communications system for radio-controlling torpedoes that laid the technological foundations for everything from Wi-Fi to GPS, and beer? And I hesitate to imagine how embarrassed you’d be if someone thought you were upset that a private business was realizing a business opportunity by reserving one screening this weekend for women to see a superhero movie.

You and I are serious men of substance with little time for the delicate sensitivities displayed by the pitiful creature who maligned your good name and sterling character by writing that abysmal email. I trust the news that your email account has been hacked does not cause you undue alarm and wish you well in securing your account.

And in the future, should your travels take you to Austin, please know that everyone is welcome here, even people like those who wrote that email whose views are an embarrassment to modernity, decency, and common sense.

Even the mayor’s press secretary, Jason Stanford, got a few jabs in.

“Most people are aware that the Mayor’s office has precious little control over movie screenings,” he told NPR. “This is the first time we’ve ever been asked to insert ourselves into the seating process at the Alamo Drafthouse.”

And don’t worry, he checked to make sure the Alamo isn’t breaking any mythical reverse sexism laws.

“It’s legal,” Stanford said. “It’s a private business. Furthermore, 99 percent of all the screenings in Austin are dude-friendly. It’s almost like the whole world is set up for us.”

Next, take a look at history’s most powerful speeches given by women. Then, meet the suffragettes who defended their rights with jiu jitsu.