Inside The Uncontacted Awá-Guajá Tribe, Earth’s Most Threatened Indigenous Group

Only 100 or so members of the Awá-Guajá tribe remain within the deepest reaches of the Amazon today. 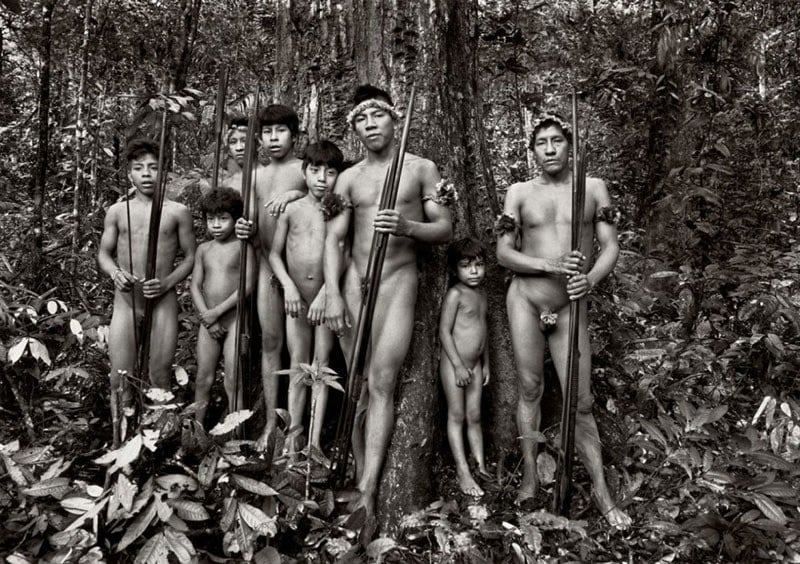 In some of the most remote reaches of the globe, uncontacted tribes continue to live without electricity, grocery stores, and any of the other conveniences of modern life that the rest of us take for granted.

In Brazil alone, approximately 100 tribes call the Amazon Basin home, including the most threatened indigenous group in the world: the Awá tribe. Though rarely even glimpsed by the outside world, these tribespeople live a complex life deep inside the rainforest. And in a rare event, a recent video captured by a member of a neighboring tribe revealed an Awá man in action.

Rare footage of one Awá tribe member was recently recorded by a neighboring tribe in order to draw attention to efforts to protect the shrinking indigenous territory.

The reason that video was captured and released in the first place was to draw attention to the plight of this endangered group. Today, their way of life is threatened by logging, the oil industry, and sometimes, their own government.

Inside The Awá Tribe Of The Remote Amazon

The Awá tribe, also known as the Guajá or Awá-Guajá, lives deep within the Amazon rainforest. But since approximately 1800, around the same time as the arrival of the European colonizers, the tribe learned to adopt a nomadic lifestyle in order to avoid European incursions in the jungle.

Sadly, conditions have not changed much for the Awá-Guajá people over the centuries. Because of the threat of violence from loggers and the deforestation of the Amazon that they call home, many of them have been pushed off their lands. 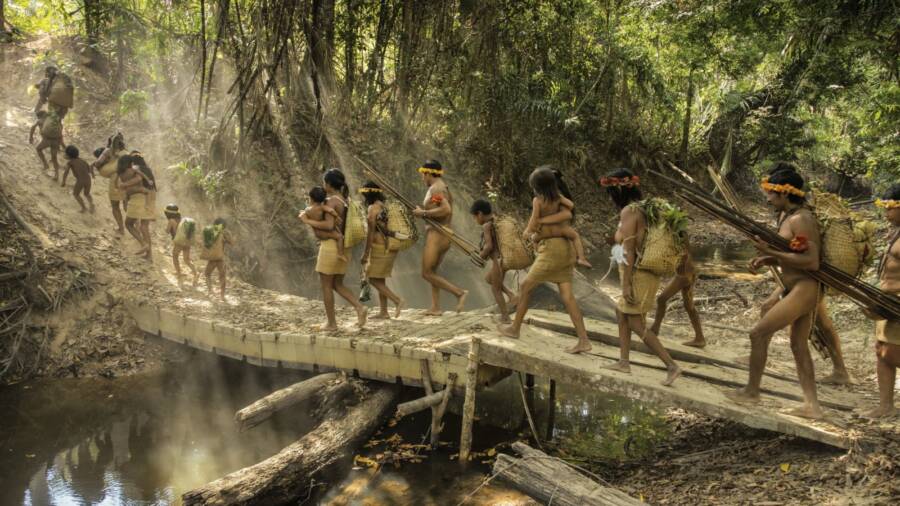 Charlie Hamilton James/National GeographicMembers of the Awá tribe walk through the Amazon.

Still, an estimated 100 or so of them remain isolated deep in the jungle as a way to protect their tribe from contact with encroaching outsiders. Despite the growing threats around them, these people have persevered.

This is, in part, because the Awá-Guajá are nomadic hunter-gatherers and possess incredible survival skills. When it comes to hunting for food, children of the tribe are taught how to handmake their own bows and arrows, and how to hunt from a young age.

Beyond survival skills, the Awá tribe has a rich culture of craftsmanship built upon a wealth of inventive techniques specific to their unique environs. For instance, they often make tools and other necessities, even hanging hammocks, out of palm tree fibers. 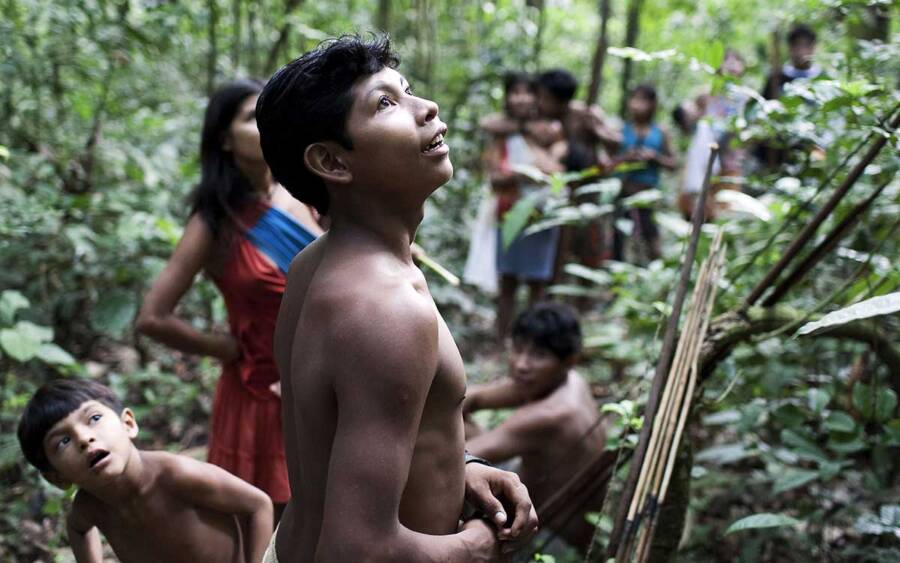 PinterestFamilies will hunt or gather food together on extended trips away from the group.

The Awá live in extended family groups that embark upon gathering trips together to collect nuts and berries. Meanwhile, the Awá also go on extended family hunts that can last several weeks. During these extended trips away from their group base, they sleep in makeshift shelters made from palm leaves and build their own torches out of tree resin.

When not out hunting, the Awá tribe enjoys a friendly relationship with their neighboring forest-dwellers and even keep primates as pets. Baby monkeys, for example, comfortably spend time with the children of the tribe, sometimes even resting on their backs or on top of their heads.

An Indigenous Tribe Under Constant Threat

A brief look at some of the threats facing the Awá and some of the efforts being undertaken to save them.

Over the years, the Awá tribe has lived under constant threat of being pushed out of their home in the Amazon, so they have learned to be invisible.

In fact, they have become so secluded that their very existence had been brought into question by developers who are looking to find excuses to cull the rest of the rainforest’s untouched land, some of which still remains within the demarcated territory of the Awá tribe.

But no matter what developers might like to say, the Awá tribe is indeed still alive and well in the forest.

In July 2019, a member of the Awá tribe was discreetly recorded among the heavy vegetation of the rainforest. The footage showed an Awá man sniffing a machete while out hunting, before he notices he is being watched and disappears into the forest with a fellow tribesman.

The video was captured by people from the neighboring Guajajara tribe and was released to the public as evidence of the Awá people’s existence.

The Guajajara tribe — another Amazon tribe under threat by loggers, farmers, and miners — has teamed up with NGOs like Survival International that are committed to fighting for indigenous rights and save what is left of the forest in Maranhão, which has experienced massive deforestation in the northeast of Brazil.

On top of these partnerships, the Guajajara perform routine patrols that are conducted by their own people, who are known as the Amazon’s Forest Guardians. Other tribes, such as the Ka’apor, have also begun to perform similar patrols for purposes of security and to protect their land.

Unlike the Guajajara and the Ka’apor tribe, the Awá natives have experienced almost no contact with other people from the outside world. But they do exist and continue to try to live undisturbed on the lands that they inhabit. 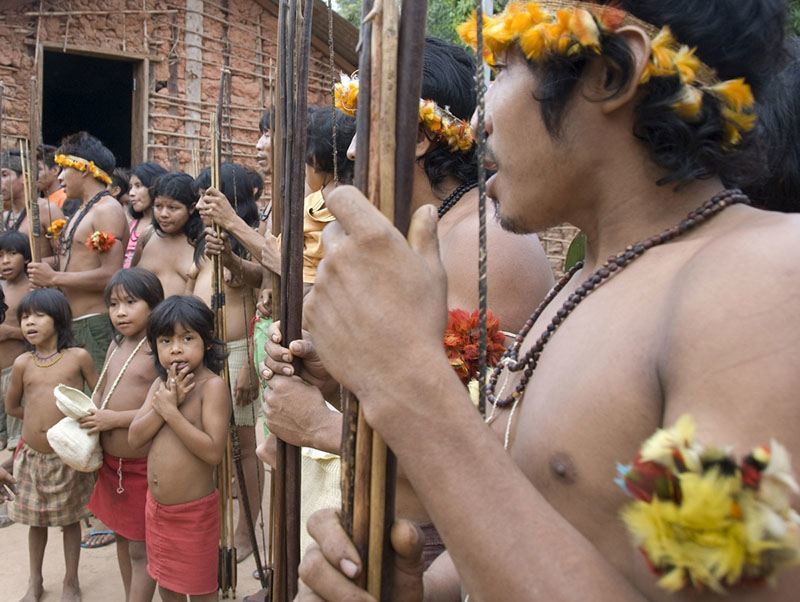 The rare new footage of the Awá was recently screened on TV Globo’s Fantástico as part of an investigative documentary that featured interviews with anthropologists familiar with the tribe.

“We didn’t have the Awá’s permission to film, but we know that it’s important to use these images because if we don’t show them around the world, the Awá will be killed by loggers,” said Erisvan Guajajara, who is a member of the Guajajara and is part of an indigenous filmmakers collective called Mídia Índia.

“We’re using these images as a cry for help and we’re calling for the government to protect the lives of our relatives who don’t want contact with outsiders.”

In June 2019, Amazon deforestation accelerated more than 60 percent compared to the same period the previous year.

Environmental advocates believe that Brazilian President Jair Bolsonaro, a vocal opponent of environmentalism and indigenous rights, and his relaxed regulations on deforestation has emboldened corporations, farmers, and miners who want to continue to devastate these lands.

Meanwhile, the presence of native tribes such as the Awá-Guajá has helped push calls for increased protections of threatened territories. The Awá lands were finally defined in 2003, spurring the legal protection of 4,800-square-miles of seasonally dry woodlands toward the west of the Amazon rainforest.

But the Awá natives, particularly those that continue to live in isolation outside of the state-designated protected territories, are still under threat of violence. Many of the tribespeople who have ended up in the contacted settlements apart from the isolated community were forced out of their community because they had to flee armed loggers that threatened their lives.

Even with protections in place, laws become nothing but empty policies unless the government actually enforces them. 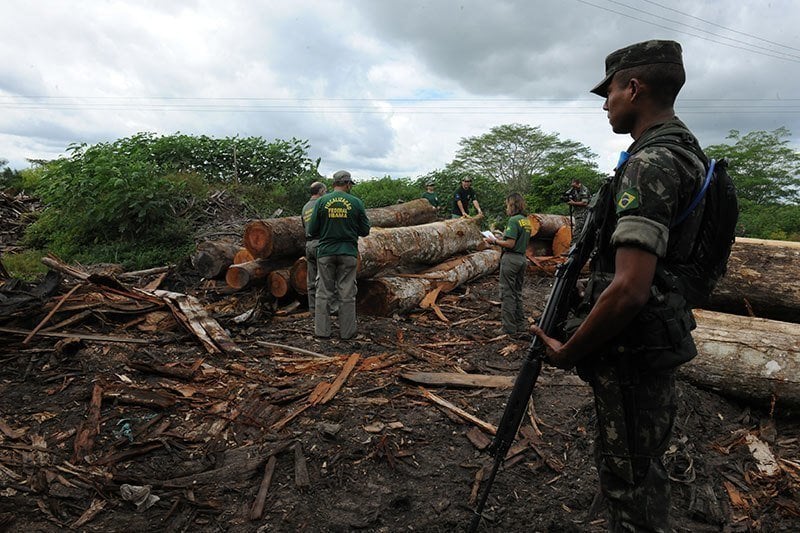 While there is no doubt that illegal miners, farmers, and loggers pose the greatest threat to these untouched cultures, it is important to understand the role that governments play in the protection of their indigenous populations. For the Awá tribe, the Brazilian government’s complacency concerning — and at times blatant disregard for — the security of these people has cost them their lives.

For example, an Awá man named Takwarentxia, along with his wife and baby son, were contacted in 1992, far from their tribe’s territory. They had been on the run from gunmen who murdered some of their family group.

In 2011, a young Awá girl was burned alive by illegal loggers after she wandered out of her village and into the government-protected area of Maranhão. Four years later, three isolated Awá natives made contact with a settled Awá tribe after hearing chainsaws and witnessing logging trucks around their encampment.

These are only some examples of murders of natives by loggers who want to seize the native lands to make a profit. And make no mistake, these are not isolated events; illegal loggers and ranchers are behind the deaths of numerous tribespeople and the decimation of the territories they inhabit — or used to.

So how has the fight for land in Brazil become so violent? And what is being done to ensure that Awá tribe populations don’t continue to fall?

Environmental activists are trying to save the Awá and their homeland.

It all started in 1982. While still under military rule, Brazil received a $900 million loan from the World Bank and the European Union, under the condition that native lands would be identified and protected.

Brazilian officials didn’t exactly obey those stipulations and first used these funds to build a railway to the Carajas Mountains, where a state-owned company mined iron ore. This railway bisected Awá-Guajá hunting grounds, exposing the tribe to violence and disease.

Earlier, in 1964, the Brazilian government passed a land law to encourage development in the Amazon region. This law gave land rights to those who could cultivate the land or produce on it. If the individual demonstrated “effective use” of the land for a year and a day — which the Brazilian government decidedly defined as clearing large swaths of forests, those who inhabited them, and creating cattle pastures — they could claim the land as theirs.

In other words, an individual or group would only be able to claim land if they engaged in large-scale production activities (or, alternatively, bribe judges to grant them the land titles). This type of relationship obviously runs counter to indigenous notions of land use.

The law effectively made it very difficult for indigenous tribes to fulfill the Brazilian government’s requirement of land ownership, helping push commercial ownership of these territories by developers instead.

However, with the growing movement for indigenous rights, the Brazilian government slowly came under pressure from NGOs and protestors who blocked dams and marched on congress to protest the government’s careless treatment of indigenous tribes like the Awá-Guajá. 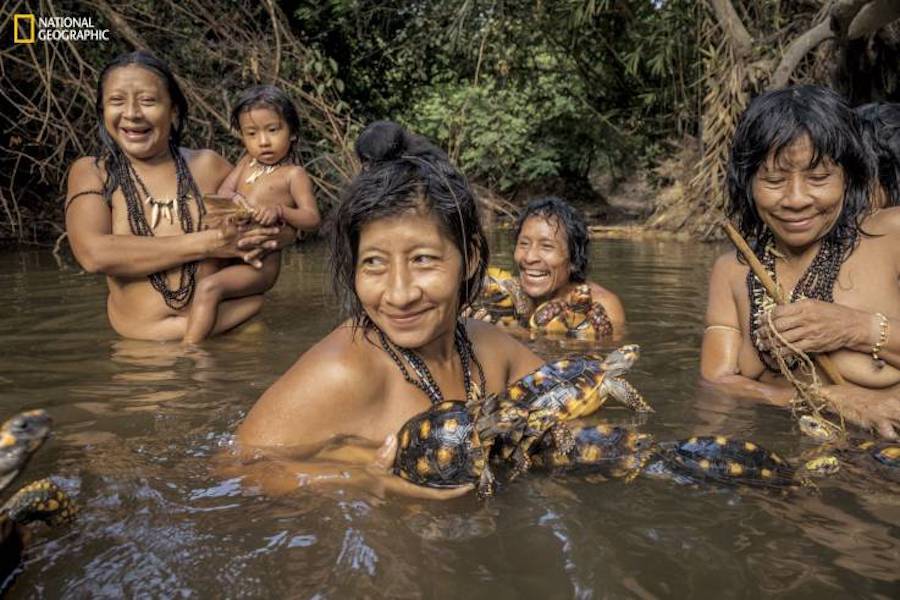 Charlie Hamilton James/National GeographicWomen of the tribe swim with tortoises.

The government also eventually met tribal demarcation requirements that were originally supposed to be spurred by the international loan they received. In 2014, Brazil finally agreed to send in the military to properly protect Awá-Guajá tribal lands and eject interlopers from the protected territories.

The Future For The Awá-Guajá

FUNAI, Brazil’s National Indian Foundation, has worked with the military to clear the indigenous lands of illegal farmers. Said farmers have been given notice by the Brazilian government to leave the demarcated tribal zones and will, in return, be given another parcel elsewhere in the state.

These solutions work for now, but it may be a little too late. One-third of the Awá-Guajá tribal land in Maranhão has already been destroyed. How much more will be felled once the military leaves? This question has become all too familiar to tribes living in the Amazon.

FUNAI estimates that almost 50 additional tribes are isolated in the Brazilian jungle. If the Brazilian government’s slow response to the needs of the Awá people is to serve as any guide on how these other tribes might be treated, indigenous decline is imminent.

It is estimated that 150 million tribal people live in more than 60 countries across the world. Even though their land rights are recognized by international law, they are still fighting to have those rights be properly respected by their own governments. And if that doesn’t happen, tribes like the Awá might not be uncontacted so much as nonexistent.

After this look at the Awá-Guajá, see drone-captured images of another previously uncontacted Amazon tribe. Then, read about the American Christian missionary Steve Campbell, who broke Brazilian law and endangered an uncontacted tribe.