The barreleye might look like a submarine, but its transparent head is necessary to navigate the 2,500-feet-deep waters in which it lives.

At first glance, the barreleye fish might look more like an alien creature than anything earthly. But the elusive barreleye is very much a real creature and it lives deep in our oceans.

The barreleye gets its name from the pair of tubular eyes embedded in its transparent head. It looks something like a deep ocean submarine with a large glass window. But this bizarre physical trait is actually an astute hunting tool that illuminates the abyss in which the barreleye lurks.

Life In The Abyss For The Barreleye Fish

The barreleye has only been captured on camera underwater once.

In 1939, bewildered scientists first described the barreleye and since then have been piecing together how it lives. Scientifically known as Macropinna microstoma, the barreleye fish or as its more aptly known, the “spookfish,” is considered by biologists to be one of the “most peculiar and unknown fish groups in the deep-sea pelagic realm.”

So far, biologists have identified several different species of barreleye within the Opisthoproctidae family that all share the commonality of having strange tubular eyes.

These fish have been found at depths as far as 2,600 feet and typically around the mid-Atlantic ridge, Australia, and New Zealand. They are believed to prey on drifting jellyfish, copepods or small crustaceans, and other types of small animals found in the deep sea.

The barreleye is also commonly found near-motionless in the water. Their small flat fins allow for precise maneuvering and may also help them to navigate through the stinging tentacles of local jellyfish where smaller prey may have gotten caught.

Some of the most common jellyfish that share the barreleye’s environment are siphonophores, also known as colonial jellies. These siphonophores grow to over 33 feet long and drift through the ocean depths while their long stinging tentacles trail through the water, capturing small creatures in their path. Researchers believe that the barreleye may take its meals from the animals caught in the siphonophore’s tentacles.

But there is still so much that researchers do not know about the elusive barreleye fish, for instance, how exactly they see and how they hunt. But a 2009 study helped to shed some light on this shadowy creature.

Hunting With A Transparent Head

Scientists are still trying to uncover more about this mysterious deep-sea fish.

Like other deep-sea fish with unusual physiologies, the transparent head of the barreleye is believed to be an adaptation that has allowed it to see into the dark depths of the ocean.

Marine biologists have long known that their tubular eyes were adept at collecting light, but they initially thought that the eyes of the spookfish were fixed in place, allowing the animal to only look directly above it.

Then, in 2009, researchers at the Monterey Bay Aquarium Research Institute (MBARI) were able to observe a live barreleye fish that was successfully brought to the surface for several hours. During their observation of it, biologists uncovered some shocking revelations. 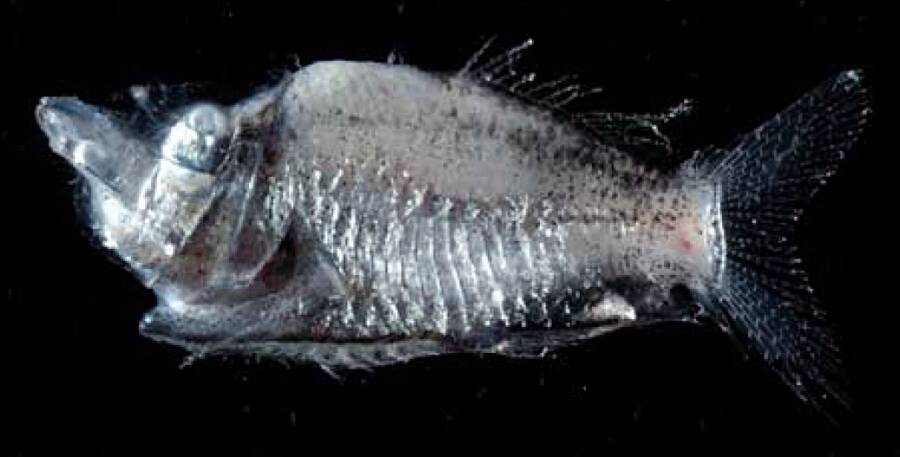 Moreover, scientists believed that the barreleye’s eyes were fixed in a stare straight above them, but they soon realized that they could, in fact, rotate. This led researchers to believe that the barreleye peers upwards to spot the faint shadows of its potential prey and then fixes its eyes forward as it slowly rises to meet its victim.

As for its strange, see-through head, researchers found that it was actually filled with a fluid that formed a transparent shield. Earlier descriptions of the barreleye fish failed to mention its bubble head, and researchers think that may be because it was destroyed when the fish was brought to the surface for inspection. 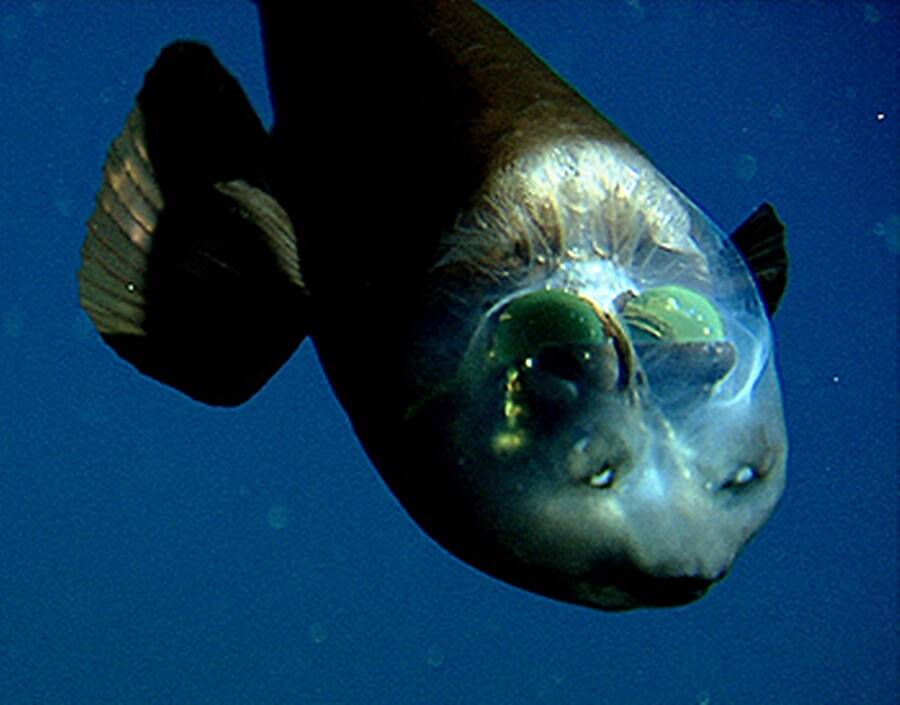 MBARIThe green tubes pictured here are the eyes while the dark circles above them are the mouth and nares, or fish nostrils.

Researchers also noted that some species of Macropinna microstoma have evolved to have special organs located on their bellies called “soles,” which are covered with pigmented scales.

The soles act as reflectors that deflect light from the bioluminescent organs inside their bellies, illuminating the deep sea around them and potentially helping them to camouflage. It could also be that the spookfish uses this adaptation in order to communicate.

Many Questions Remain Regarding The Spookfish 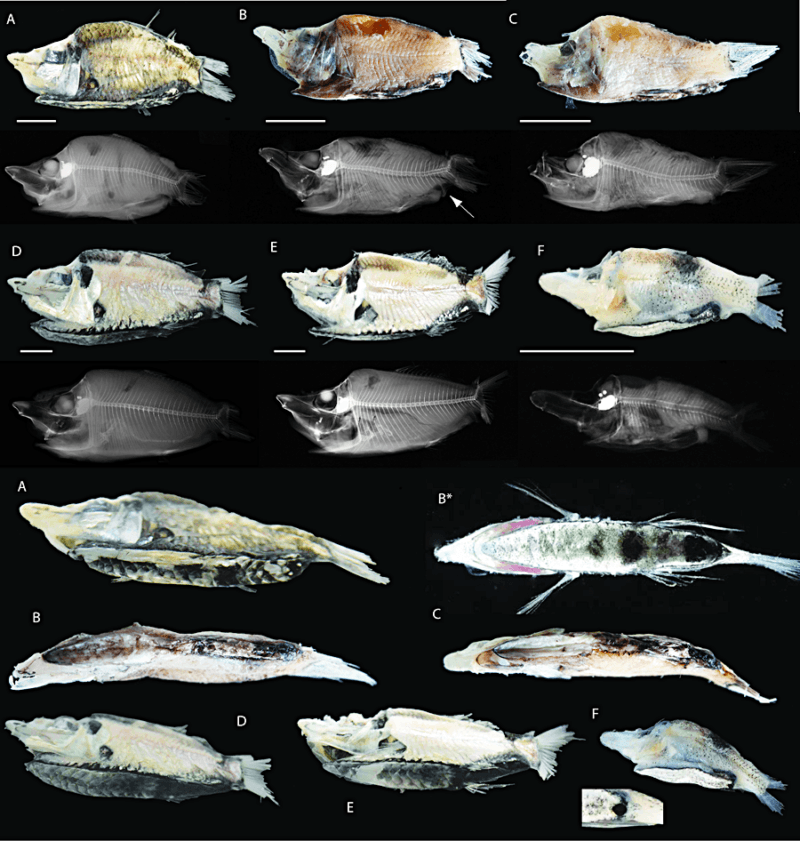 Scientists are only beginning to understand this strange fish. So far, only 19 species of spookfish have been identified. In fact, two of those species were discovered as recently as 2016, when scientists spotted them off the coast of New Zealand.

According to a subsequent study, these new species were identified by comparing the pigment patterns in their eyes with those of previously-known specimens. Researchers grouped the two new species under the genus Monacoa and named them black mirrorbelly and grey mirrorbelly.

Wikimedia CommonsAt 2,000 feet below the surface, the barreleye fish is one elusive and mysterious creature.

“This new study on the deep-sea has shown unknown biodiversity in a group of fishes previously considered teratological [abnormal] variations of other species,” said Jan Poulsen, a co-author of the study.

These fish are the only vertebrates known to use a mirror instead of a lens to focus an image in their eyesight, but studies on its visual abilities are scant. Scientists have also noted what they believe to be an “evolutionary shortening” of the fish’s body which is quite unusual among deep-sea fishes.

For millions of years, the barreleye fish swam hidden in black oceanic depths until it was finally brought into the light of discovery by scientists. Who knows what other bizarre, unimaginable inhabitants still lurk undetected in the dark, waiting to be seen?

Now that you know all about the barreleye fish with a see-through head, take a look at the faceless fish caught in Australia for the first time in 140 years. Then, check out the 15 weirdest freshwater fish ever caught on River Monsters.