Known only as Alexander, the victim was mauled and dragged into a brown bear's den as food for later. When found, he resembled a mummified corpse. 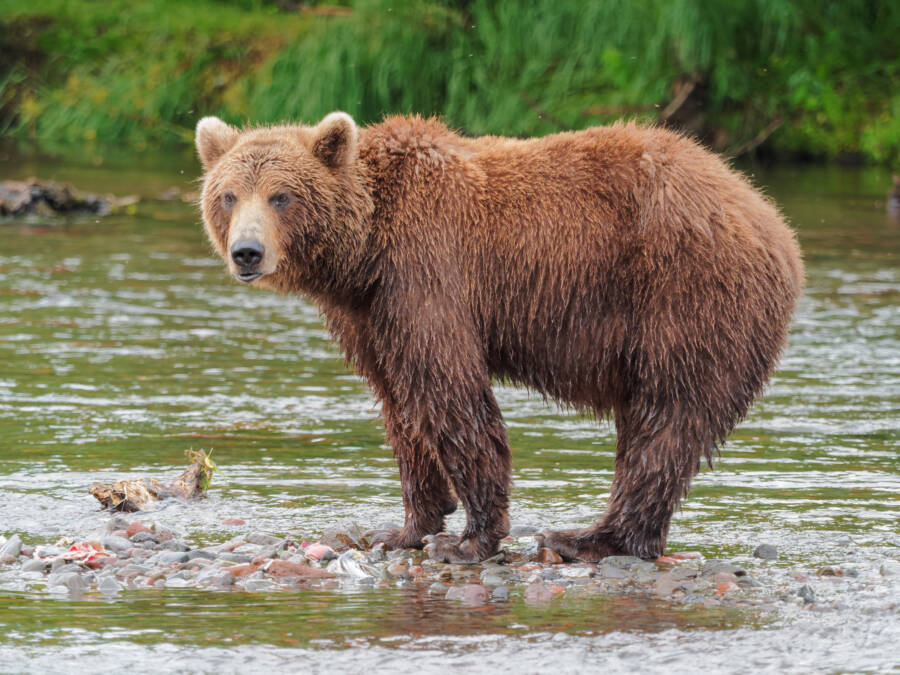 Wikimedia CommonsThough it’s rare for brown bears to attack and then drag prey into their dens, it does happen. Alexander just happened to be part of that unlucky minority.

Update: Recent revelations reported by The Independent have strongly suggested that this story was fabricated by a well-known syndication service that routinely couches its news in Russian tabloid sources. EADaily was either fooled like the rest of us, or intentionally publishing fake news.

The Russian wilderness is so expansive that a lost or injured hiker might never be found alive again. Another considerable element of this enormous terrain, of course, is the deadly wildlife one can encounter.

According to The Sun, one such victim was found half-dead in a bear’s den by hunting dogs. It had been a month since the man had been dragged by the ferocious bear into its hideout. Known only as Alexander, the man had a broken spine and was so badly injured that he looked mummified.

The hunters who discovered Alexander said it was a miracle that he survived at all. The photographs, though disturbing, indicate just how close to death he was. He later told the doctors that he was overpowered by the bear, dragged to its den, and kept for later.

“The bear preserved me as food for later,” he said. “I drank my own urine to survive.” 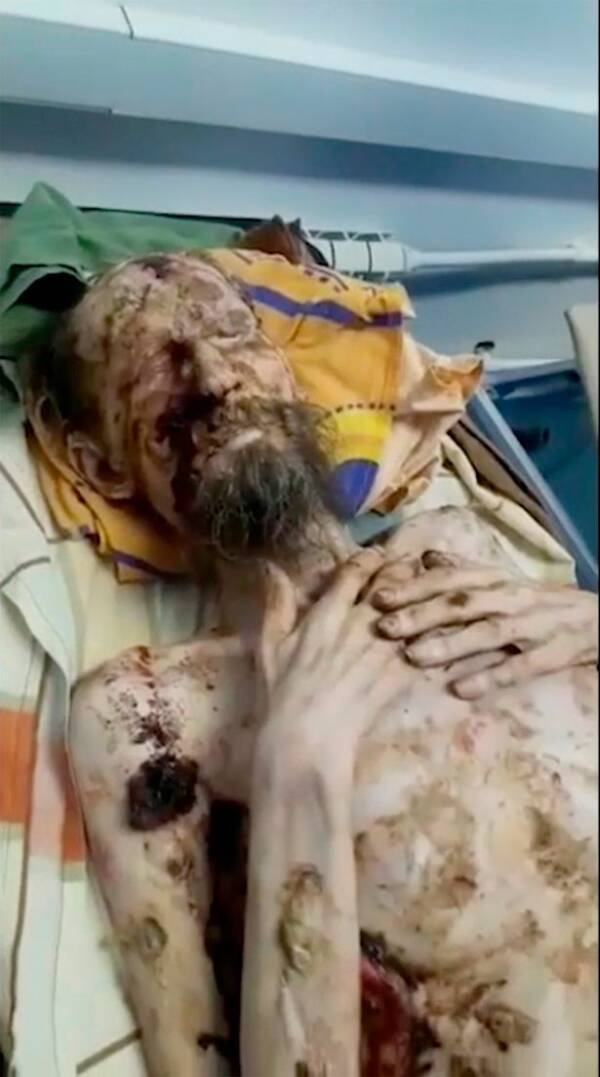 Rey Gore/The Siberian TimesAlexander opened his eyes once hospitalized, and confirmed his first name to the medical staff.

Alexander was lucky to have a group of hunters pass by the den in which he was dying. Even luckier was the fact that the hunters even bothered to check the lair at all, but felt compelled to because their dogs kept barking at its entrance.

When the hunters looked inside, they found what they believed was a “human mummy” at first. They quickly realized that the mummy was actually still alive and dangerously close to death. Footage later captured in the hospital allegedly shows Alexander opening his eyes, and confirming his name to the camera.

Alexander has sustained “severe injuries and rotting tissue” from remaining immobile with open wounds for an extending period of time. Doctors were dumbfounded as to how Alexander managed to survive the attack at all, let alone going without care for so long.

While the exact spot where he was found hasn’t been made public, Alexander was discovered somewhere in the Tuva region’s forests near the border of Mongolia. The hospital footage has medics speaking Russian to him, rather than the local Tuvan language.

According to Dr. Louise Gentle, who works in wildlife conservation at Nottingham Trent University as a senior lecturer, this incident is extremely uncommon. She said that a bear mauling somebody only to drag the victim into its den is a “very rare thing to happen.” 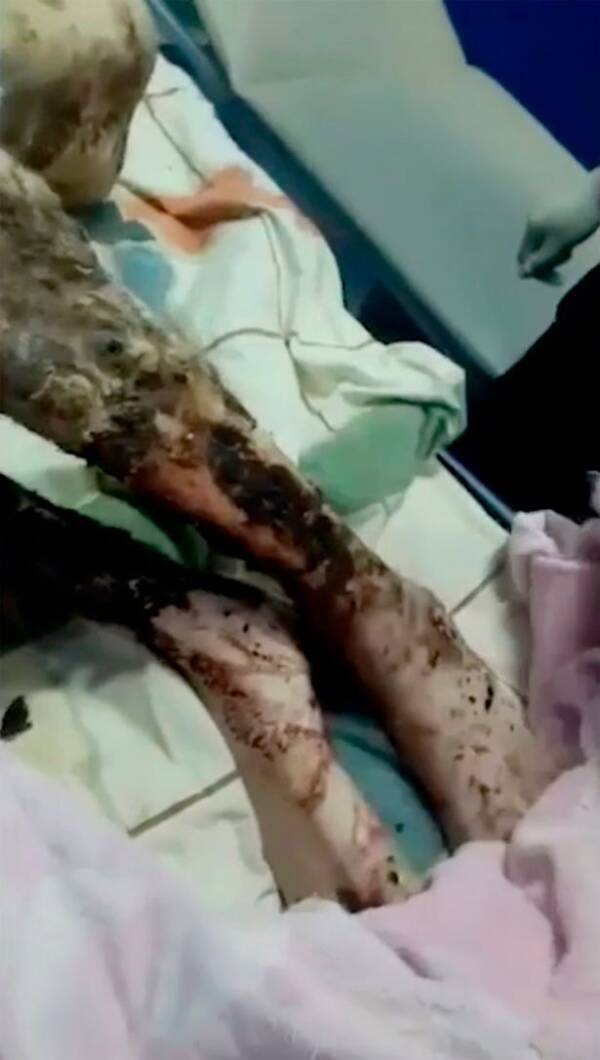 “It’s amazing how this man survived,” Dr. Gentle added. “It’s very rare for a bear to go near a human — bears are actually more wary of us and therefore avoid us…It is possible that the man somehow antagonized the animal — maybe the bear had cubs nearby and was protecting them. It’s a weird scenario.”

To her point, brown bears lead solitary lives when they’re not mating or tending to their young. Their hibernation period begins in December and lasts for around six months — making a June encounter fit this particular timeframe. Of course, this is all quite speculative.

The bear could have been foraging for food for itself or its young when it encountered Alexander and decided to make a long-term meal out of him. Eurasian brown bears, after all, are known to partially kill or bury their kill so as to return to them later. These bears are also said to hide their prey from competing scavengers and burying the prey allows it to decompose for easier consumption.

Regardless of the specifics, it seems Alexander caught a tremendously lucky break. While his condition isn’t entirely clear as of yet, he does seem to be alive — and that’s more than most who get mauled by a brown bear can say.

Update: EADaily Editor Alexei Demin told The Independent that he’d received the footage of “Alexander” from only one source, which claimed it had received it from “hunter friends via social media.” The story quickly went viral due to its harrowing photos — which had been used in yet another fake news item in June.

On June 19, the quite literally unbelievable story of a “living mummy,” here, too, named Alexander, was published on social media and numerous websites. Alexander came back from the dead, climbing out of a cemetery, his body riddled with afflictions.

These were the very same photographs used in the bear story below.

Officials of the Tuva region where this supposed incident took place contacted Demin soon after the piece was published, alerting him that no such event had occurred. According to The Independent, however, the footage of the hospitalized man was quite convincing.

Nonetheless, the tale of a man surviving one month in a bear’s den only to be discovered by hunters and their dogs does appear to be fake.

Next, look at this photo of an emaciated polar bear that reveals its species’ grim future. Then, learn about evidence of the fabled “king” polar bear possibly having been discovered in Alaska.