In the early 1800s, John Bell and his family were reportedly haunted by a malevolent spirit dubbed the Bell Witch — an ordeal that ultimately ended in murder.

For centuries, the legend of an evil entity called the Bell Witch has made waves in rural Robertson County, Tennessee. The spirit allegedly appeared in the early 1800s to haunt farmer John Bell and his family — but she remains a part of American folklore to this day.

Though the Bell Witch started as a relatively harmless entity, knocking on walls and pulling blankets from beds, she quickly turned violent. Soon, John’s daughter Betsy had scratches and welts all over her body. And after three years of escalating hauntings, the ghost supposedly murdered John himself. 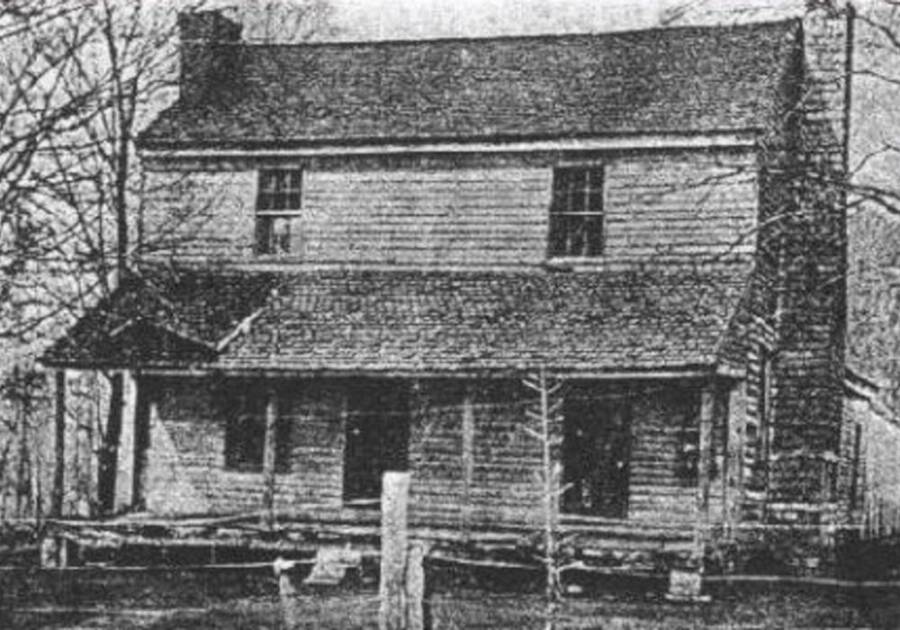 Twitter/@CryptKeepPodA photograph of the Bell family home before it was torn down.

Several theories have emerged over the years in an attempt to explain the Bell Witch hauntings. Some believe a local schoolteacher who was in love with Betsy Bell somehow fabricated the eerie phenomena so the girl would leave her betrothed and marry him instead. And modern-day scientists think John Bell was slowly poisoned with arsenic — perhaps by one of his enslaved workers.

While it is impossible to know the true nature of the unexplainable events that terrorized the Bell family in the 1800s, the legend of the Bell Witch persists as “America’s greatest ghost story.”

The Terrifying Origins Of The Bell Witch Legend

According to the official Bell Witch website, the story of the fabled apparition began when Red River, Tennessee — now Adams, Tennessee — farmer John Bell spotted a strange creature in his corn field in 1817. It looked like a dog with the head of a rabbit, but it disappeared when he shot at it, so he didn’t think much of it.

That evening, while John and his family were sitting down to dinner, they heard a strange knocking sound from outside. Several of John’s sons ran out the door to see what it was, but they saw nothing.

Over the next few weeks, John, his wife Lucy, and his children continued to see apparitions and hear unexplainable noises.

One of his sons saw a bird of “extraordinary” size, and his daughter Betsy spotted a girl with a green dress swinging from the limb of an oak tree. Even one of the farm’s enslaved workers mentioned that a large black dog had been following him around.

And as time went on, the hauntings only increased in frequency and violence. Soon the family heard knocking and choking noises throughout the house, invisible dogs fighting, the sound of rats gnawing on the beds, and chains being dragged along the floors. The children had their bedsheets ripped off them and endured scratches and hair-pulling.

The ghost seemed to favor Betsy, as she was pinched, slapped, and stuck with pins. Sometimes the invisible abuse left red handprints and large welts all over her body. Reportedly, the witch often claimed that she wouldn’t leave the Bell family alone until John was dead and Betsy broke off her relationship with a young man named Joshua Gardner.

When John confided in the happenings to a family friend named James Johnston, the man spent a few nights on the Bell farm and confirmed that some sort of spirit seemed to be terrorizing the family. 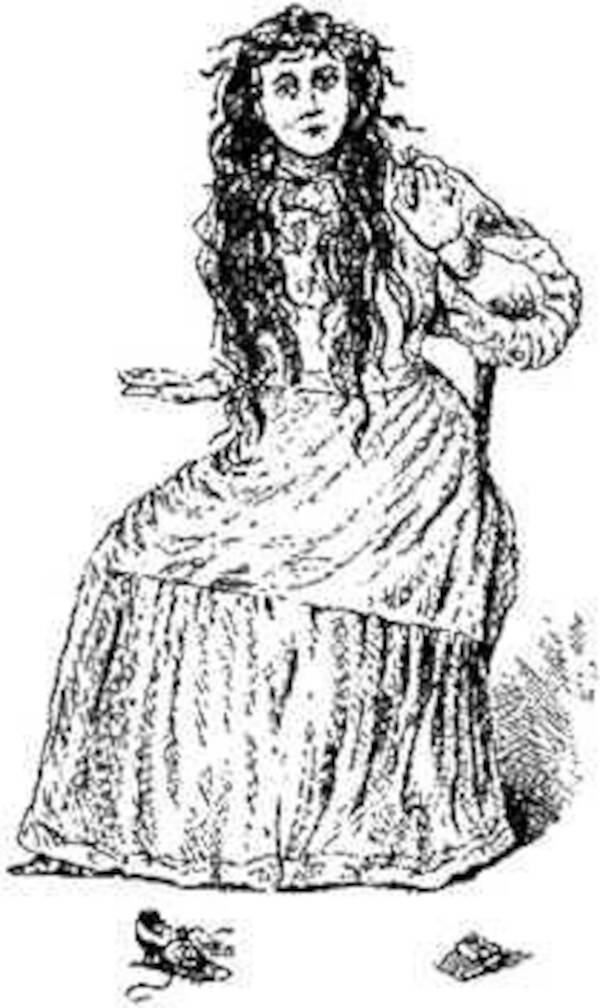 One version of the legend states that the Bell Witch was a spirit that had been disturbed when the family built their farm on Native American burial ground. Another says that the Bell family once asked the ghost who she was, and she responded that she was the witch of Kate Batts, an eccentric neighbor who was known for making up stories for attention.

Regardless of its identity, news began to spread about the evil spirit, and the home soon became a tourist attraction of sorts. People traveled from out of town to witness the witch’s tricks for themselves. Even future United States president Andrew Jackson supposedly paid the Bells a visit.

A Future President’s Experience With The Bell Witch

According to the Tennessee State Library and Archives, then-General Andrew Jackson heard stories about the Bell Witch and decided to investigate himself in 1819. Some believe he had property on the Red River and stopped by the Bell farm when he was in the vicinity, and others say three of John Bell’s sons had fought under him at the Battle of New Orleans, so he wanted to visit them and offer his assistance.

As soon as Jackson and his entourage entered the Bell property, one of their wagons became stuck. Despite their best efforts, the wheels simply would not turn, and Jackson declared that it was the doing of the witch. According to legend, a disembodied voice then said, “All right General, let the wagon move on. I will see you again tonight.”

At the farm that evening, one of Jackson’s men proclaimed he was a “witch tamer” and had a silver bullet that would kill any evil spirit he came across. No sooner were the words out of his mouth than he began screaming and jumping around, shouting that he was being pricked with pins and beaten.

The disembodied voice reverberated through the air once more, saying another “fraud” would be revealed the following day. Jackson’s men begged to leave, but the general convinced them to stay put for at least one night.

It’s unclear what happened that night at John Bell’s farm, but villagers saw Andrew Jackson speeding out of town the following morning, saying, “I would rather fight the British at New Orleans than fight the Bell Witch.”

Whatever the witch did to frighten the hardened general, it was nothing compared to what many believe she did to John Bell.

From 1817 to 1820, the Bell Witch remained a permanent fixture at the Bell farm. According to the Historic Bell Witch Cave, the spirit would supposedly speak with the Bell family and visitors from around the country about the past and future, and she was especially well-versed in the Bible. She once even quoted word-for-word two different sermons that had been given at the same time 13 miles apart.

The entity, who began answering to the name “Kate” after she claimed to be the witch of Kate Batts, was violent toward John and Betsy Bell, but she seemed to like John’s wife Lucy. She reportedly brought her fresh fruit once when she was ill and often complimented her.

As the years passed and the hauntings continued, John Bell began experiencing strange muscle twitches in his face. These soon progressed to migraines, tingling sensations, fatigue, and seizures.

Then, in December 1820, John suddenly slipped into a coma. The following day, Dec. 20, he died quietly at home. Oddly, his family found a mysterious vial full of dark liquid in the kitchen cupboard that hadn’t been there previously. John Bell Jr. allegedly put a drop on the cat’s tongue — and it immediately fell over dead. 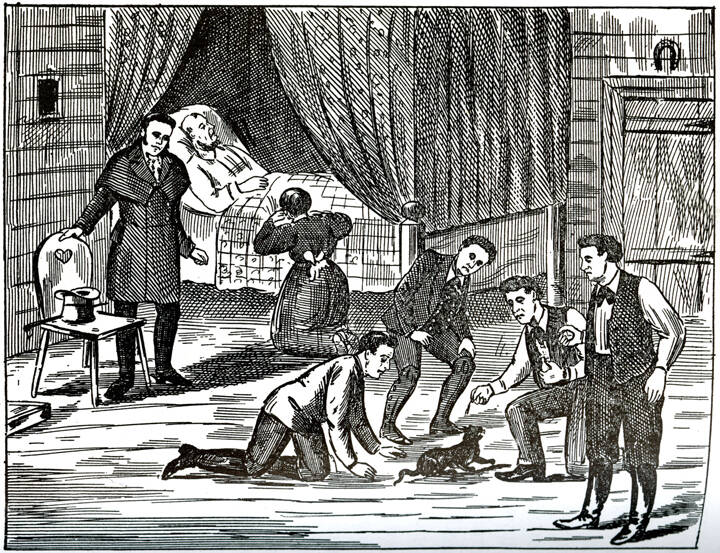 The Bell Witch’s voice then echoed through the house: “I gave Ol’ Jack a big dose of that last night, which fixed him!” John Jr. threw the vial into the fire, where it exploded into a blue flame and shot up the chimney.

With John dead, the spirit could focus on Betsy. She began to follow her whenever she was with Joshua, her fiancé, pulling her hair, beating her, and shouting threats and curses at the young couple. By March 1821, Betsy couldn’t take it anymore. She broke off her engagement with Joshua — and the Bell Witch suddenly disappeared.

The entity allegedly visited Lucy and told her she was leaving, but she’d return in seven years. And sure enough, in 1828, the Bell Witch reappeared to John Bell Jr. and stayed for three days, speaking with him about the past, present, and future. She even reportedly made predictions about the Civil War, which was still over 30 years away.

When she vanished for a second time, she supposedly said she’d return in 107 years, but there are no records of a reappearance in 1935. However, some of John Bell’s descendants claim they’ve seen signs of the enduring entity.

According to the Associated Press, Lucy Bell Butler claims she and her daughter have seen the black dog from the original tale, and a giggling girl like the one Betsy saw swinging from a tree limb 200 years ago sometimes runs through their house.

Of course, Butler’s claims — along with every aspect of the Bell Witch legend — are doubted by many. After all, the story is essentially a folktale passed down through the generations, though there are newspaper articles from the 1850s that mention the witch.

And in 1894, newspaper editor Martin V. Ingram published the book An Authenticated History of the Famous Bell Witch.

There is some controversy surrounding this book. Some believe it to be a work of historical fiction, while others see it as a full-length record of the legend of the Bell Witch. But since the story seems so far-fetched, multiple other theories about the true origins of the tale have emerged over the centuries.

As with any good paranormal story, there are several possible explanations for the events surrounding the Bell Witch haunting. One of the older theories involves Betsy Bell’s teacher, Richard Powell.

Supposedly, although Powell was 11 years older than Betsy, he was madly in love with her and was visibly disappointed when he discovered she was engaged to Joshua Gardner. He was also rumored to have knowledge of the occult, ventriloquism, and horticulture. In other words, if anyone could pull off a such an involved hoax, it would be him. 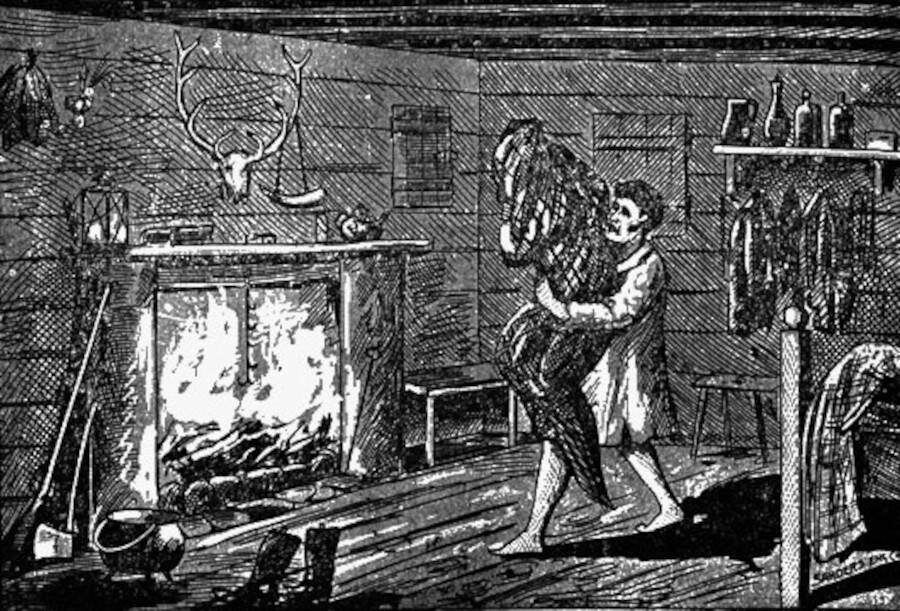 Wikimedia CommonsAn illustration of a Bell family friend attempting to throw the witch into the fire.

This theory is strengthened by the fact that Powell did indeed marry Betsy Bell after she broke off her engagement with Gardner.

A more modern explanation of the Bell Witch haunting comes from Dr. Meagan Mann, a chemistry professor at Austin Peay State University in Clarksville, Tennessee, just 20 miles from the original site of the Bell farm.

She told the Tennessean, “[John Bell’s] son talked about all of these strange medical symptoms he was having, and a lot of them sounded very neurological to me, as someone who knows a bit about things like biochemistry and toxicology.”

She continued, “If you look at the neurological symptoms, those are often times caused by heavy metal poisoning.”

Mann noted that arsenic was a commonly-used poison in the early 19th century, and long-term exposure to the element would have caused the symptoms such as muscle twitches and trouble swallowing that John experienced.

Additionally, arsenic burns blue — which would explain the colorful explosion when John Jr. threw the mysterious vial in the fireplace.

Mann believes that someone — perhaps someone from church who didn’t like the Bell family or one of the wealthy farmer’s enslaved workers — slowly poisoned John Bell over the course of three years, finally finishing off the job in December 1820.

No one will ever know the truth behind the Bell Witch legend. But the accounts and theories associated with the folktale certainly offer great material for late-night campfire stories.

After reading about the legend of the Bell Witch, learn the truth behind Slender Man, the creepy entity that originated from an internet horror story. Then, read about Bathsheba Sherman, the real woman who inspired the ghost from The Conjuring.