From running the rackets in Dallas to revolutionizing casinos in Las Vegas, Benny "Cowboy" Binion was perhaps the most notorious gambler in American history. 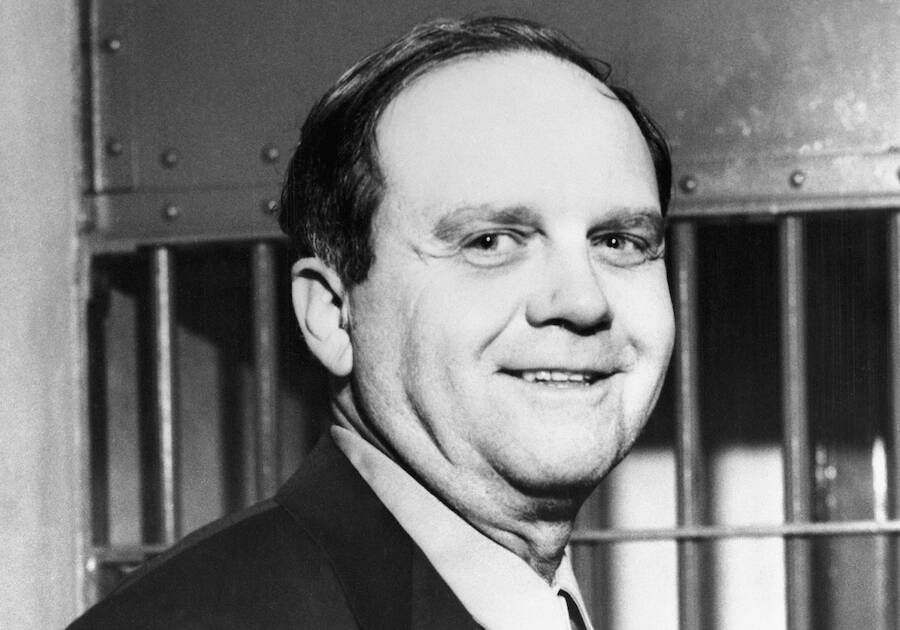 Bettmann/Contributor/Getty ImagesBenny Binion at a Texas jail in 1953. Despite his many crimes, he never stayed behind bars for long.

During Las Vegas’s lawless years, no one was quite as lawless as Benny Binion. The king of racketeering in Dallas, Binion moved to Vegas in the 1940s and opened his own casino. By bribing cops and breaking legs, Binion struck it rich the old-fashioned way in Sin City.

This is the true story of a gambling icon.

Benny Binion Got His Start In Dallas

When he died in 1989, Benny Binion was worth an estimated $100 million, but as a child in small-town Texas, he claimed he never learned to read.

Born on Nov. 20, 1904 in Pilot Grove, Texas, Binion spent his early years trading horses instead of going to school. Cheating was a way of life for the gamblers and gangsters whom Binion soon befriended. “Everybody had his little way of doing something to the cards,” Binion later recalled.

In Dallas in the 1920s, Binion learned some top tricks from Warren Diamond, the king racketeer at the time. By the 1930s, Benny Binion was king of the Dallas rackets, under this motto: “Do your enemies before they can do you.” 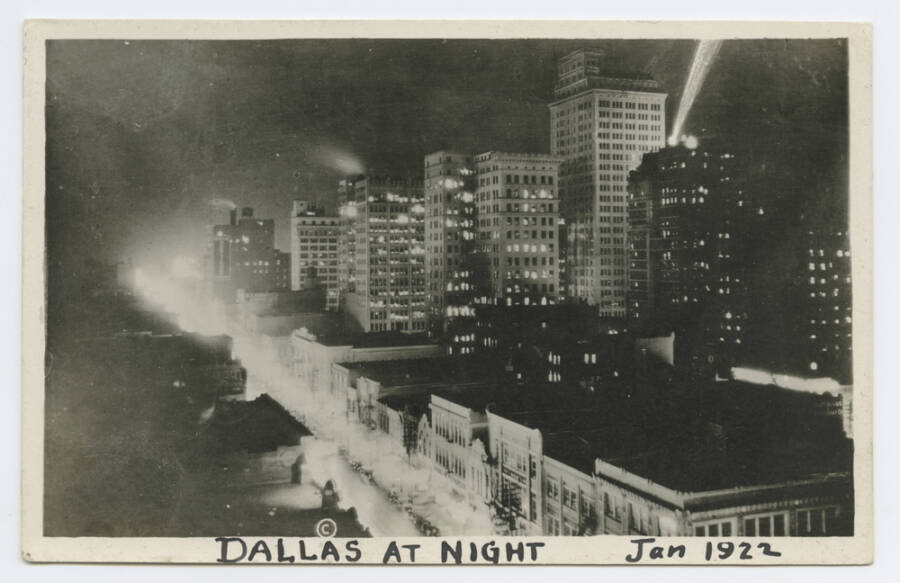 In Dallas, police mostly ignored minor vices like gambling but they still raided periodically to keep gangsters on their toes. Binion protected himself from raids by hiding his crap tables in crates labeled “hotel beds.”

Binion operated with the rules of the Old West. He carried three pistols everywhere he went and gunned down at least two business rivals. He scared away countless more before making his big move to Vegas.

By 1946, Dallas had elected a reform administration. Benny Binion read the writing on the wall and cleared out, moving west to Vegas. He said, “When I realized how good it could be up here, I said, ‘Let ’em have Texas.'”

Years before the Vegas Strip drew in millions of visitors, Binion opened his own casino, Binion’s Horseshoe. At the time, the casino game in Las Vegas was relegated to dives patronized by mobsters. So Binion felt right at home.

Binion’s Horseshoe was one of the first Vegas casinos. Binion operated the joint according to two rules: The Horseshoe was a place for serious gambling, and cheaters would have their arms and legs broken.

Detective Frank Sutton said, “The Horseshoe was the only casino in town that didn’t believe in calling the police. They took care of trouble their own way.” 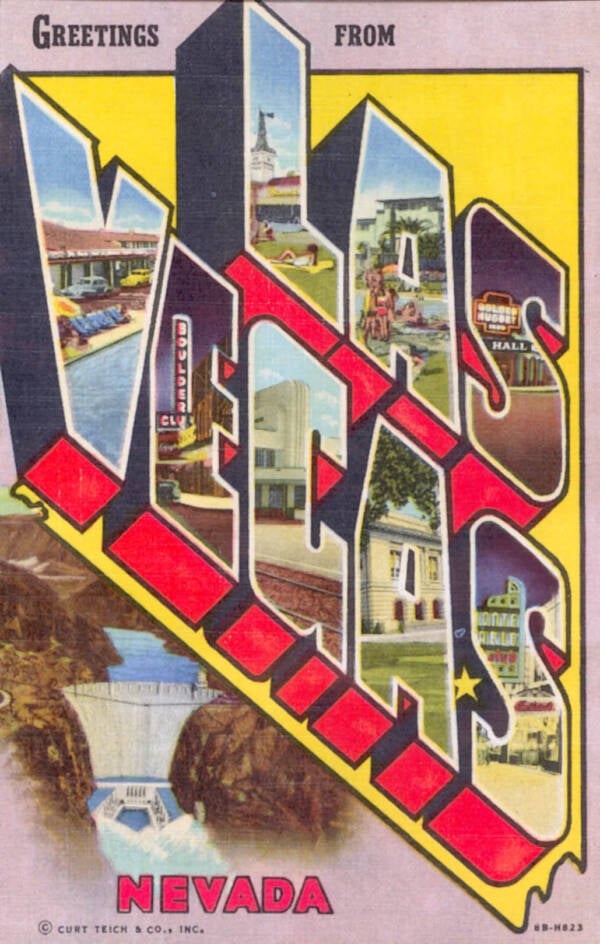 Unlike later casinos, the Horseshoe didn’t offer entertainment or fancy decor. Slot machine players got free drinks – an idea Binion pioneered – and dealers showed up in jeans. “I don’t want to see my money blown out the end of some guy’s trumpet,” Binion explained.

Binion resisted the trend of tacking a hotel onto a casino. Across the street, Steve Wynn planned to open a 2,000-room hotel and casino called the Golden Nugget. Binion responded, “Great, they can sleep in your place and gamble in mine.”

How Binion Put The Glitter Gulch On The Map

When Benny Binion moved to Las Vegas, he found only a handful of casinos operating in Sin City. But within a few years, Binion would change the casino game and put the so-called Glitter Gulch on the map.

At Binion’s Horseshoe, which opened in 1951, Binion set the craps limit at 10 times the maximum that other casinos used. The high maximum encouraged gamblers to try their luck at the Horseshoe.

Binion’s son Ted recalls that his father “was going to raise the keno limit to $500. Dave Berman said if he raised it, he’d kill him.” To a gangster who’d racked up multiple murders, the threat wasn’t much of a deterrent. 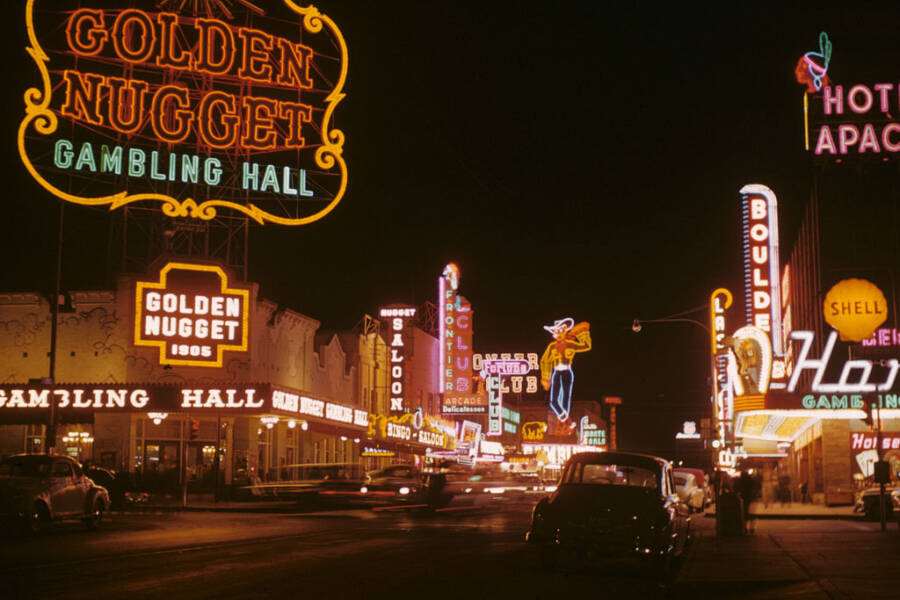 Wikimedia CommonsFremont Street, the site of Binion’s casino, in 1952.

On Fremont Street, the Glitter Gulch housed the rowdiest casinos in Vegas. At the Horseshoe, Binion began to stake his reputation on bets of any size. Texas high rollers showed up for no limits gambling.

One man walked in and bet $1 million – losing it all on the pass line at the craps table.

Benny Binion had a long-time rivalry with another Dallas gangster known as Herbert “the Cat” Noble. The nickname came from Noble’s luck – he seemed to have nine lives.

In 1946, a rival shot him in the back. In 1948, Noble walked away from a shower of gunfire that left his car destroyed. In 1949, Noble discovered dynamite in his car before starting the engine.

Noble – and the police – suspected Binion of ordering the hits. 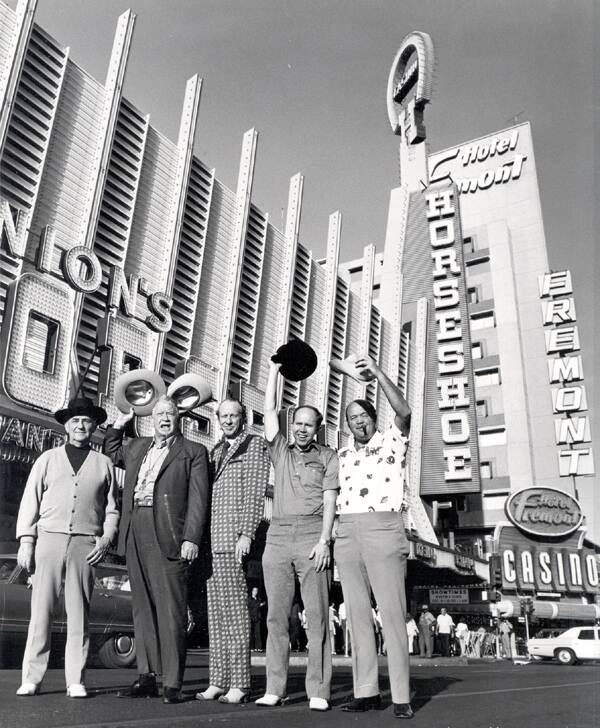 Finally, a car bomb intended for Noble killed his wife. The widower blamed Binion and came up with a scheme to take him out. In 1951, Noble rigged an airplane with two bombs, which he planned to drop on Binion’s Las Vegas home. Just before the plane took off, police stopped Noble.

In all, Noble escaped at least 11 known attempts on his life. But “the Cat” ultimately died when a mailbox bomb blew him up in 1951. Police suspected Binion but could never definitively link the crime to him.

The reform administration in Dallas kept an eye out for Binion even after he moved to Vegas. District Attorney Henry Wade worked with the Feds to nab Binion for tax evasion.

Records from Binion’s own safe-deposit box revealed that he netted over $1 million from his Dallas rackets back in 1948. Hardly any of this amount had been reported to the IRS.

A Texas jury convicted Binion of tax evasion. But by pulling strings, Binion got his case transferred to Nevada jurisdiction, where he walked away with probation and a small fine. 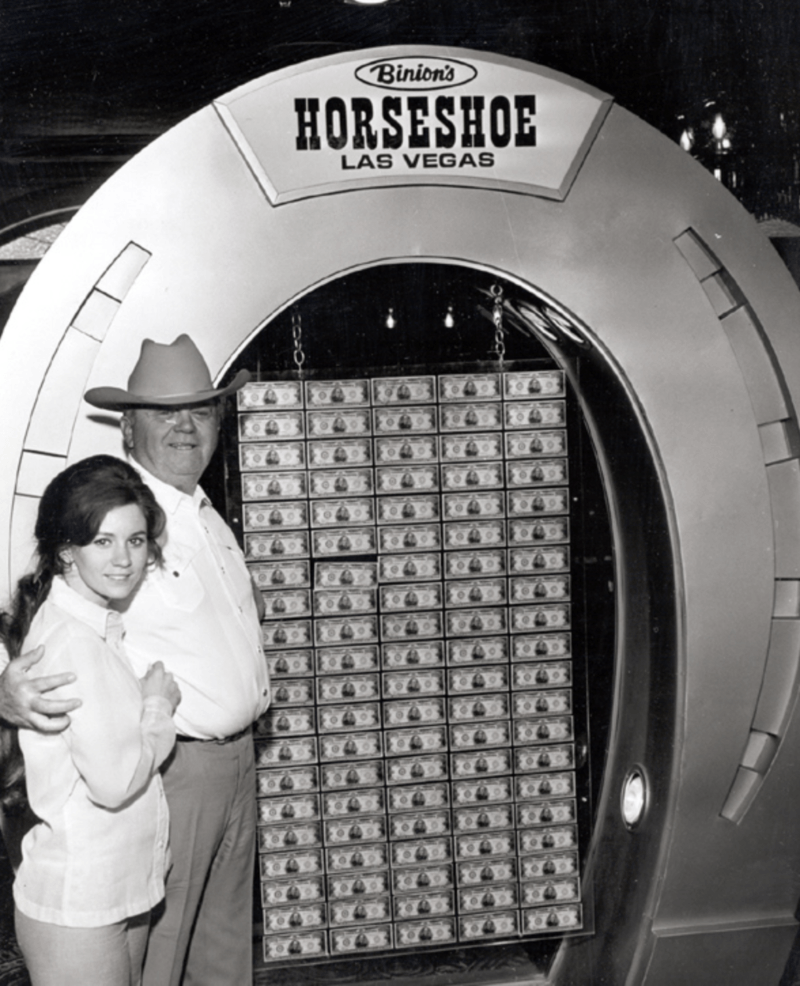 Wikimedia CommonsBinion standing with his daughter, Becky, in front of the $1 million display at his casino. 1969.

An outraged Wade pushed for a harsher sentence. In 1953, the district attorney got his wish. After teaming up with the FBI, Wade found a judge who apparently vowed, “I’m gonna get that S.O.B. back to Texas.”

That summer, Binion’s chauffeur, nicknamed Gold Dollar, drove him to Dallas. Binion pleaded guilty and paid his fine on the spot in cash. He’d brought $100,000 to bribe the judge, but “the FBI threatened him and scared him off,” Binion later claimed.

Binion spent 42 months behind bars for income tax evasion and state charges of operating an illegal policy wheel. After he was released, he returned to his casino empire in Vegas.

Binion never held a gambling license again after going to prison, but he remained on the casino’s payroll as a “consultant.”

Even in his later years, he adapted with the times as the casino industry in Vegas evolved. By the 1970s, Binion found a new way for his casino to make money: promoting the World Series of Poker.

In Binion’s casino, anyone who could afford the $10,000 buy-in could enter the challenge. Pros flocked to the tournament, along with wealthy amateurs who didn’t mind losing the money. 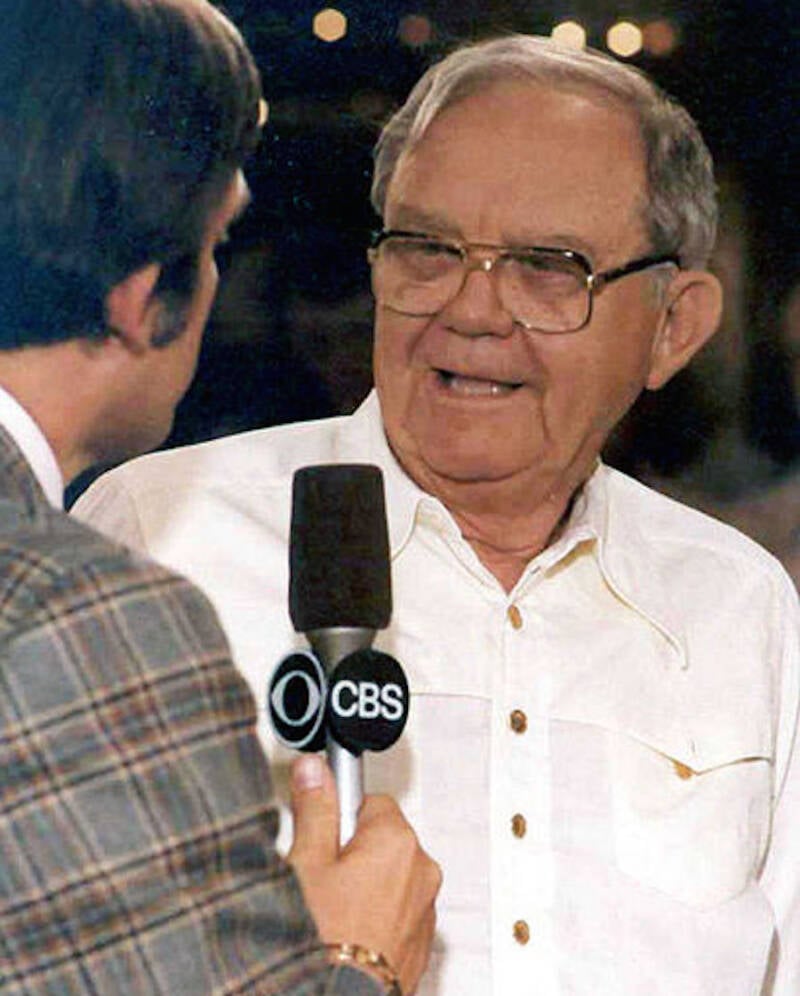 Wikimedia CommonsBenny Binion at the 1979 World Series of Poker.

Binion remained in his consultant position until he died from congestive heart failure in 1989. He was 85 years old — and he left quite a legacy behind.

Although Binion had a controversial and oftentimes violent life story, he is remembered as something of a legend in both Las Vegas and Texas.

“He was a guy you could shake hands with, and feel you had met a real American character,” said Howard Schwartz of Gambler’s Book Club. “That was what made the place. It wasn’t the classiest joint in town, but it was an authentic and unique experience. When you met Benny Binion, you felt you’d been part of history.”

After reading about Benny Binion, learn about other famous gangsters of the 1920s. Then, check out photos of vintage Las Vegas.