Before towering hotels and brightly lit casinos covered the strip, vintage Las Vegas was a humble gambling town in the middle of the desert.

In 1900, only 22 people lived in Las Vegas. In fact, it wasn’t until 1930 when President Herbert Hoover–in the midst of the Great Depression–commissioned the Boulder Dam (renamed the Hoover Dam), that people began flooding to the city. Though a small but dedicated gambling community had existed for years, the Nevada state legislature only legalized local gambling in 1931.

After the law was passed, casinos and hotels began popping up along Fremont Street, marking the birth of today’s beloved Strip.

These days more than 39 million people visit Las Vegas each year. Check out these vintage Las Vegas pictures to see the modest gambling city take shape over the past 80 years, eventually forming the desert metropolis it is today. 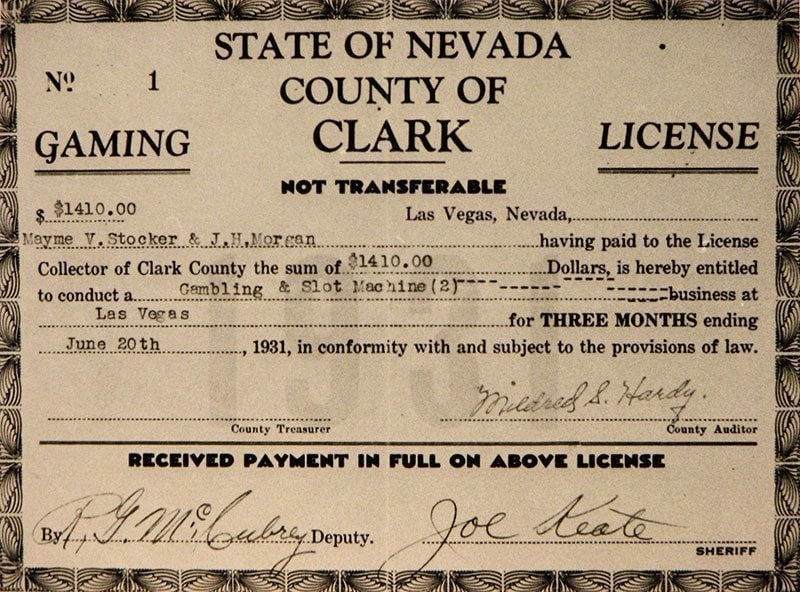 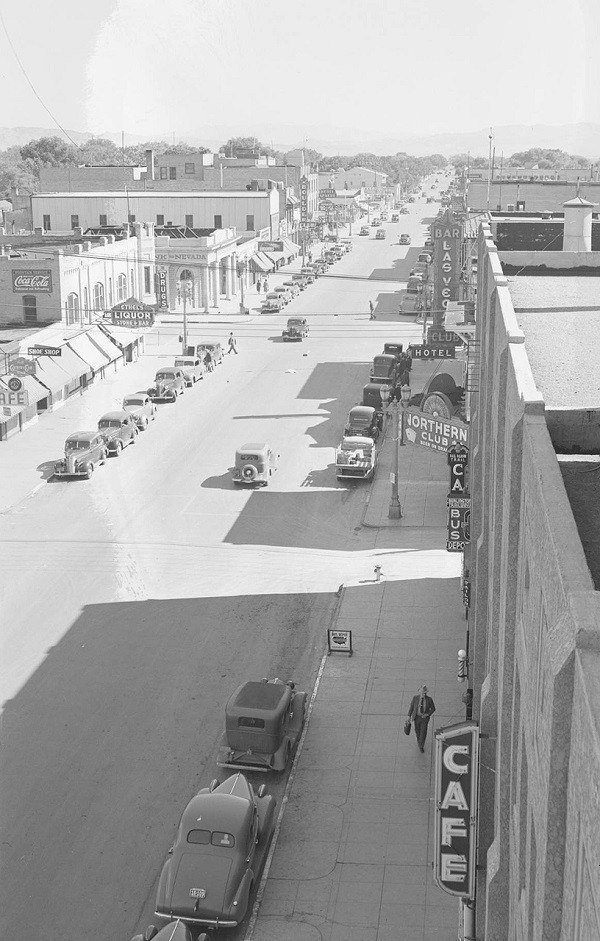 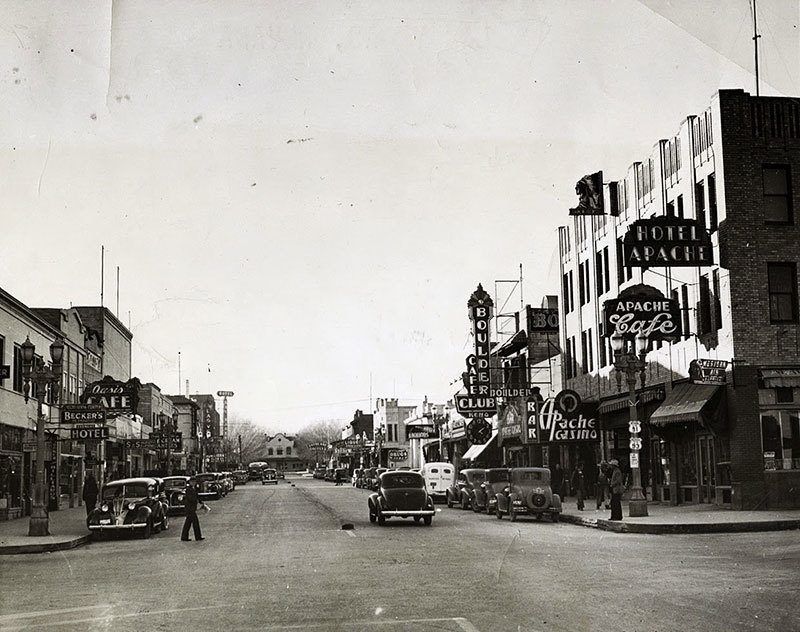 Fremont Street in the early 1930s. Many of Las Vegas's first establishments were located on this street, including Eldorado Club, Golden Gate Hotel and the Pioneer Club. Source: Vintage Everyday 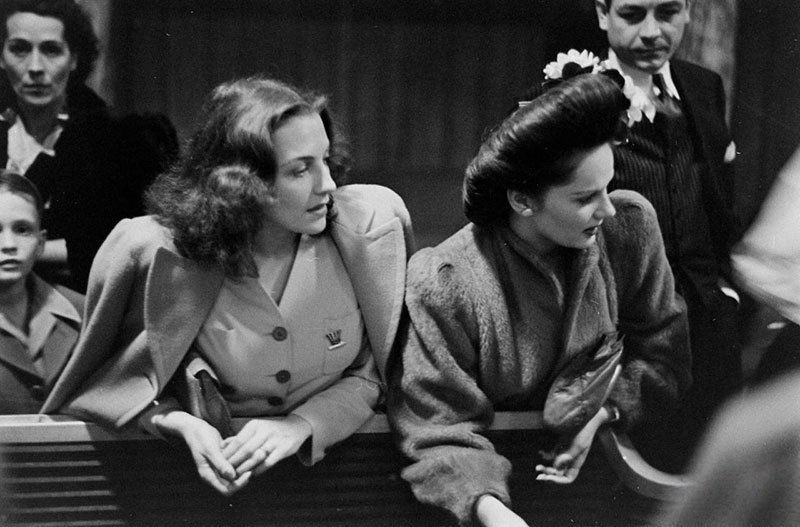 Women at one of the casinos off Fremont Street in the early 1940s. Source: Vintage Las Vegas 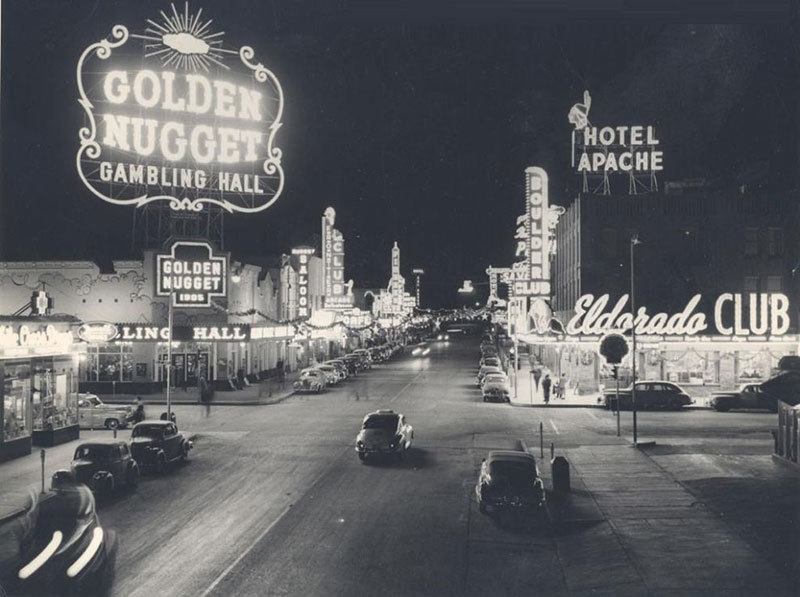 Even in 1940, Las Vegas was a spectacular evening attraction. Source: UNLV 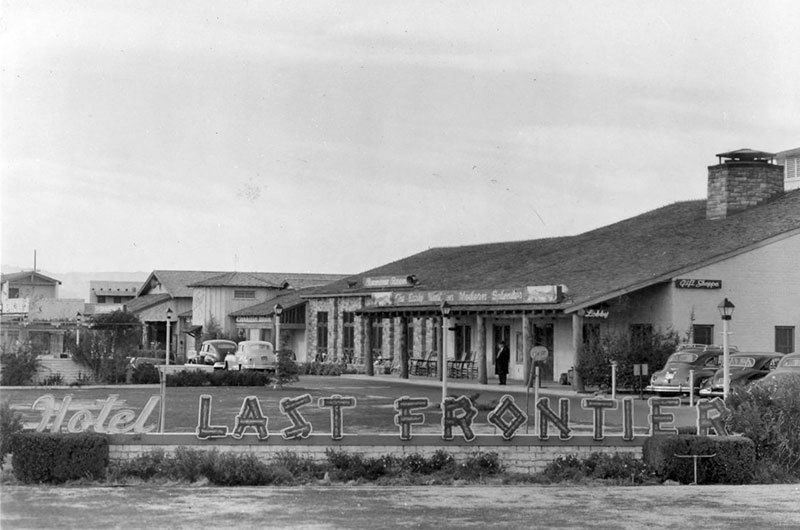 In 1944, the Hotel Last Frontier embodied an old western theme. Eventually the hotel reopened as the New Frontier Hotel, transforming from an old-west theme to a space-age theme. Source: Vintage Las Vegas 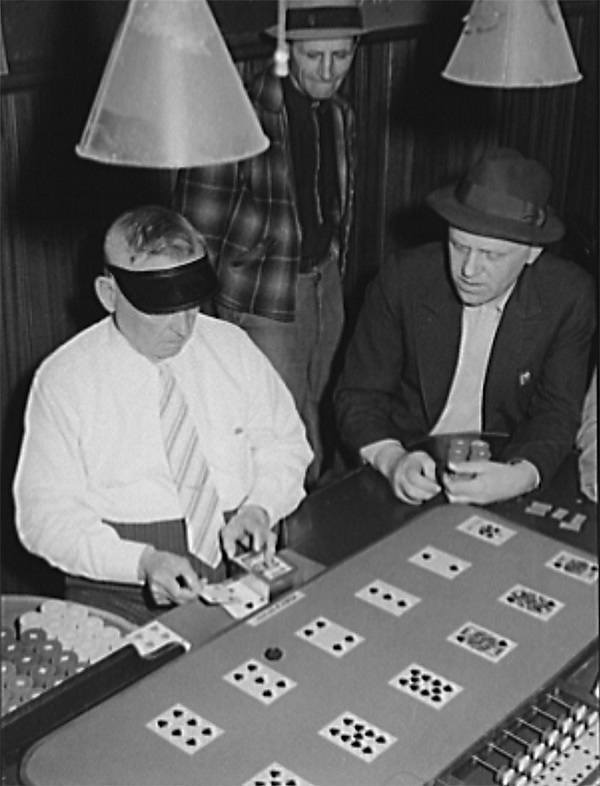 A gambler and Faro dealer in 1940. The man standing up was the game’s “lookout,” a person who was charged with making sure that players didn’t cheat. Source: Offbeat Oregon 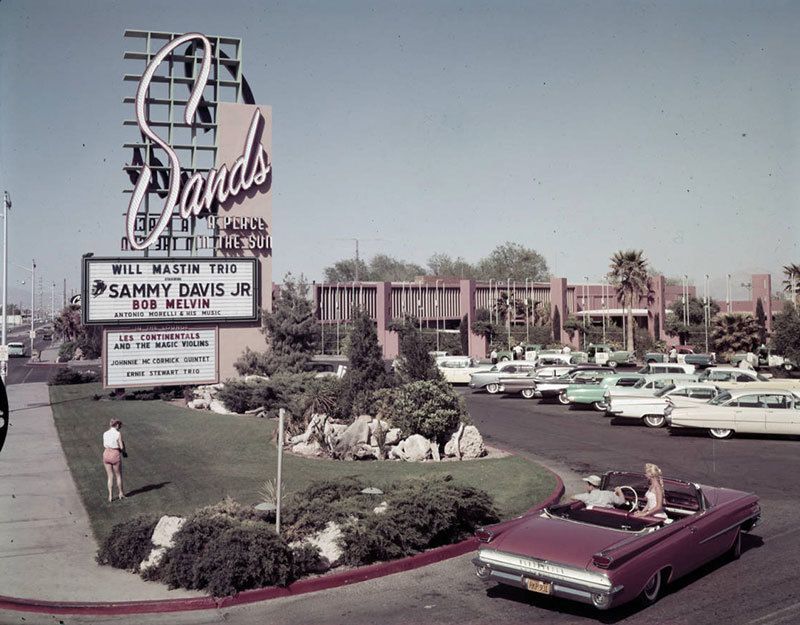 Sands Hotel and Casino (seen here in the 1950s) was the seventh resort to open on the Las Vegas strip. Source: Vintage Las Vegas 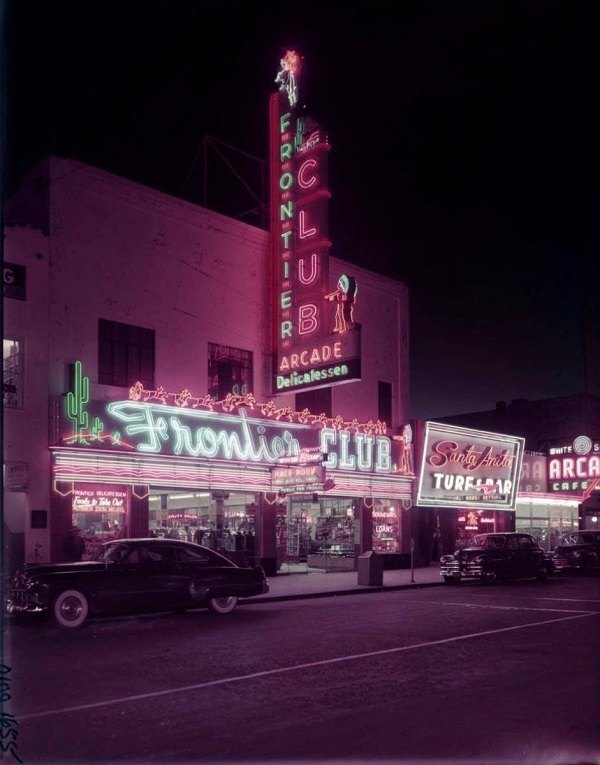 The Frontier Club at night in the 1940s. Source: Vintage Everyday 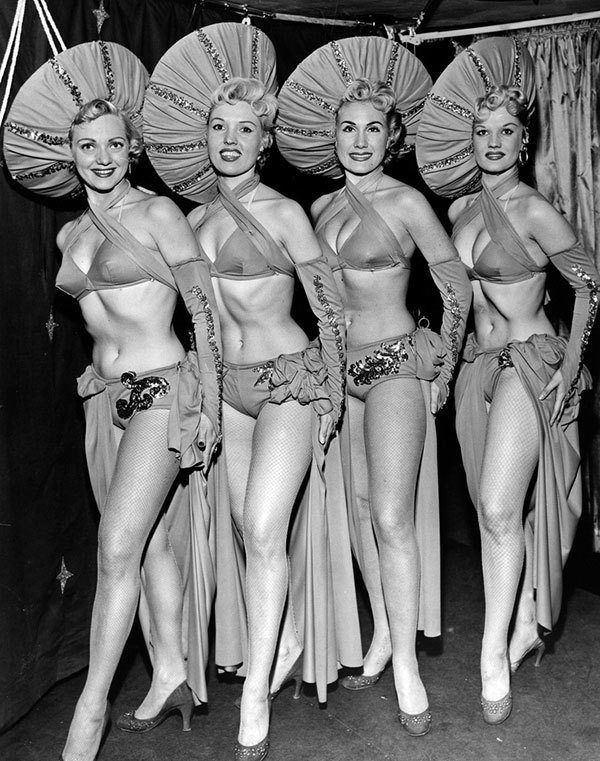 Vegas showgirls pose for a picture circa 1953. Source: Maudelynn's Menagerie 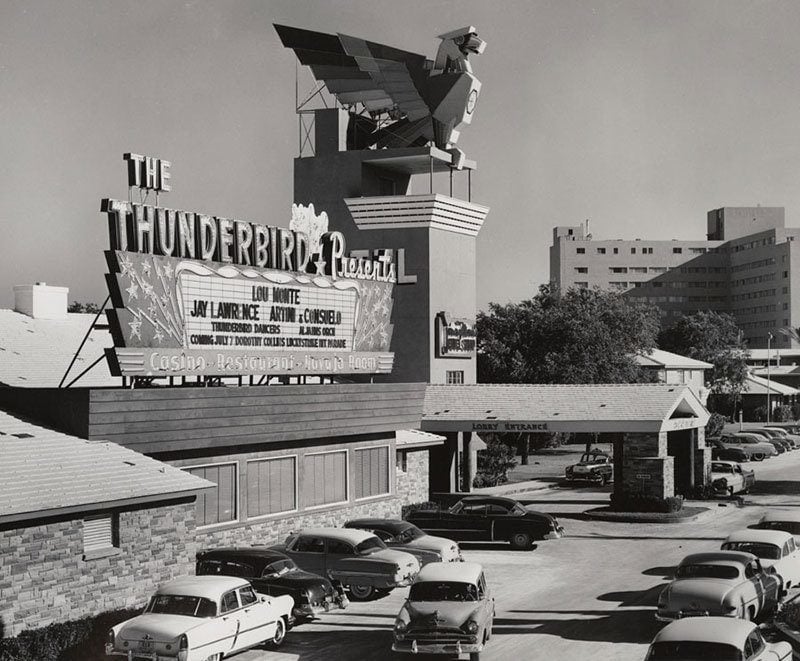 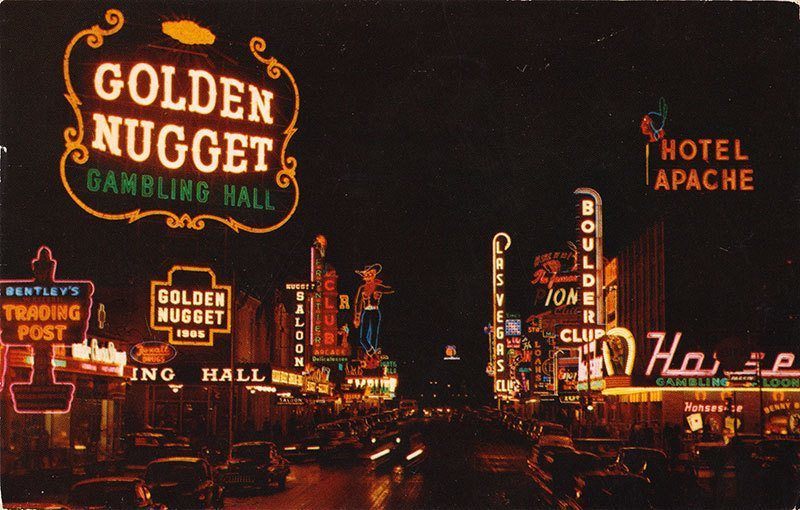 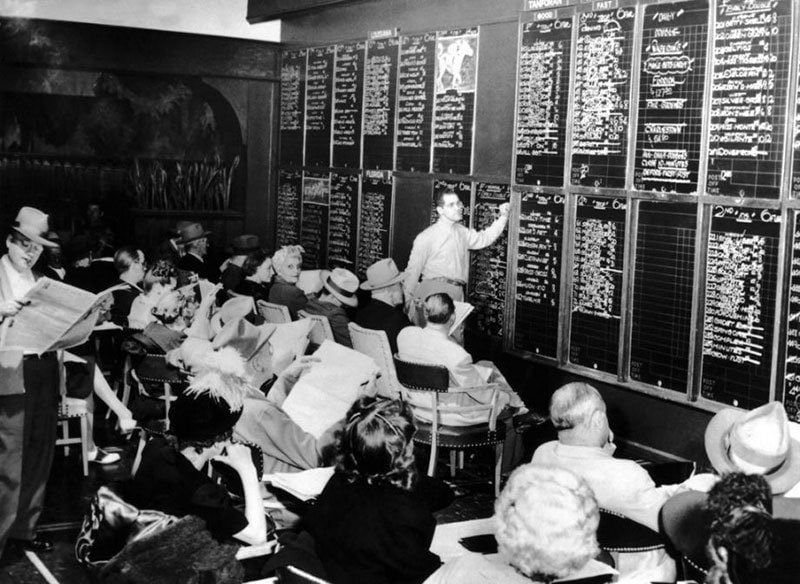 For a few years, horse race results were listed on boards, allowing gamblers to bet on the races at any time. Source: SFGate 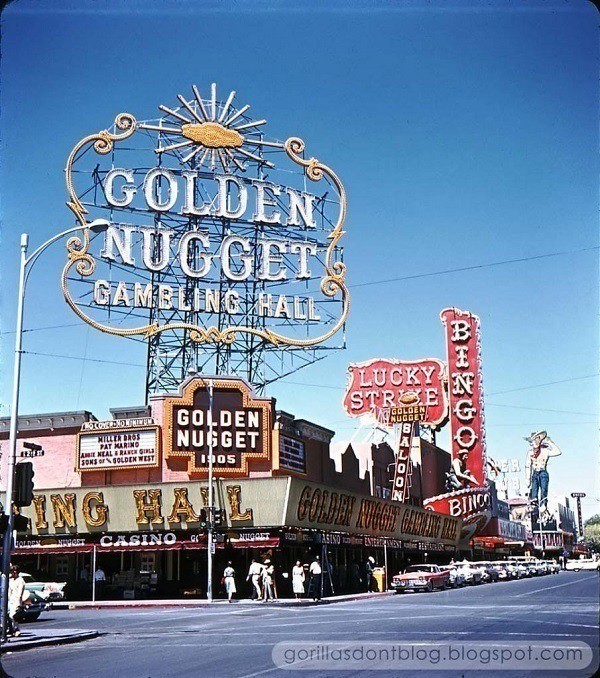 The Golden Nugget in 1960. Originally built in 1946, it is one of the oldest casinos in Las Vegas. Source: Gorillas Don't Blog 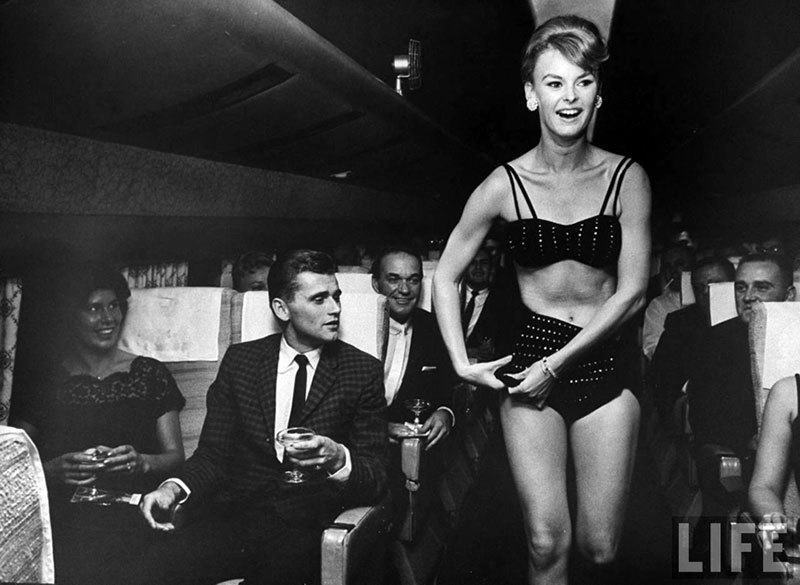 Patrons at a Las Vegas casino in 1960. Source: iBytes 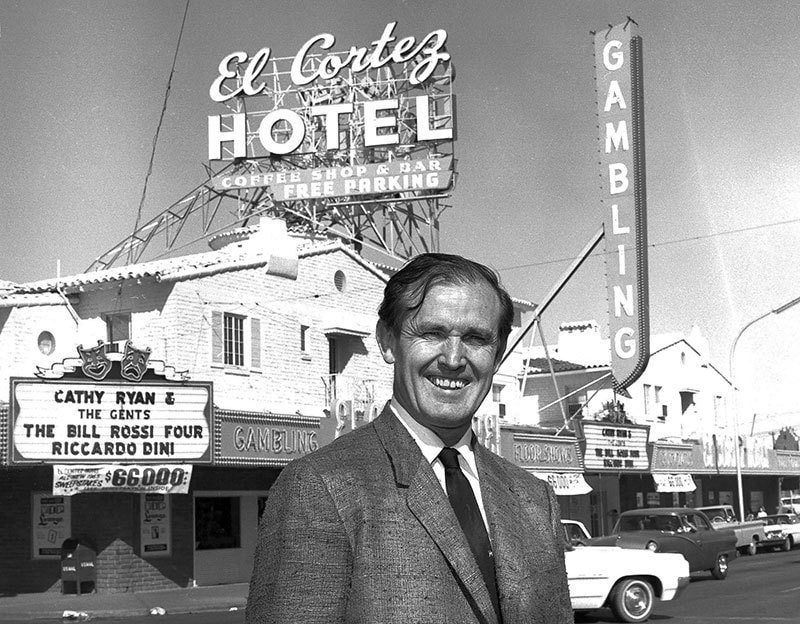 Jackie Gughan, posing here in front of El Cortez Hotel and Casino, was considered one of the fathers of Las Vegas. He had stake in about a quarter of downtown Las Vegas, and owned multiple casinos and hotels. Source: LA Times 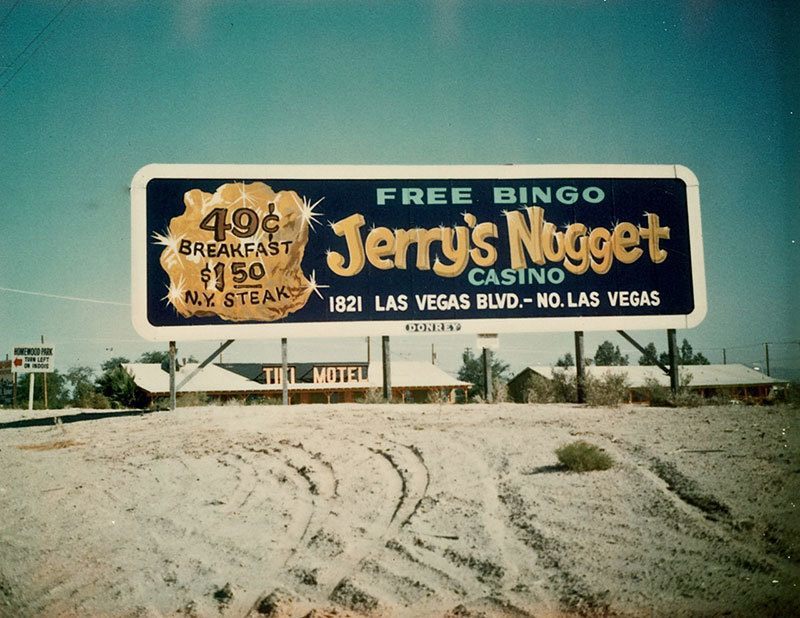 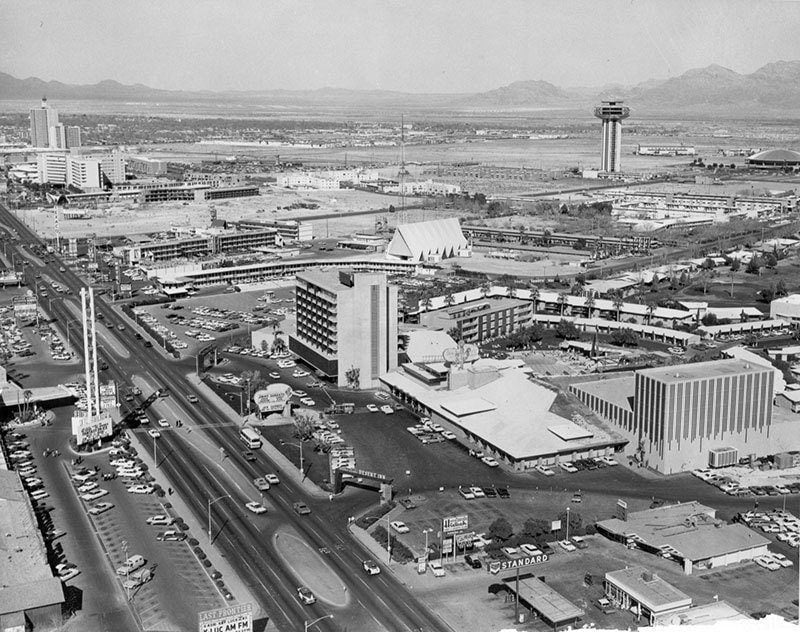 An aerial view of the Las Vegas strip in 1964. Source: Vintage Las Vegas 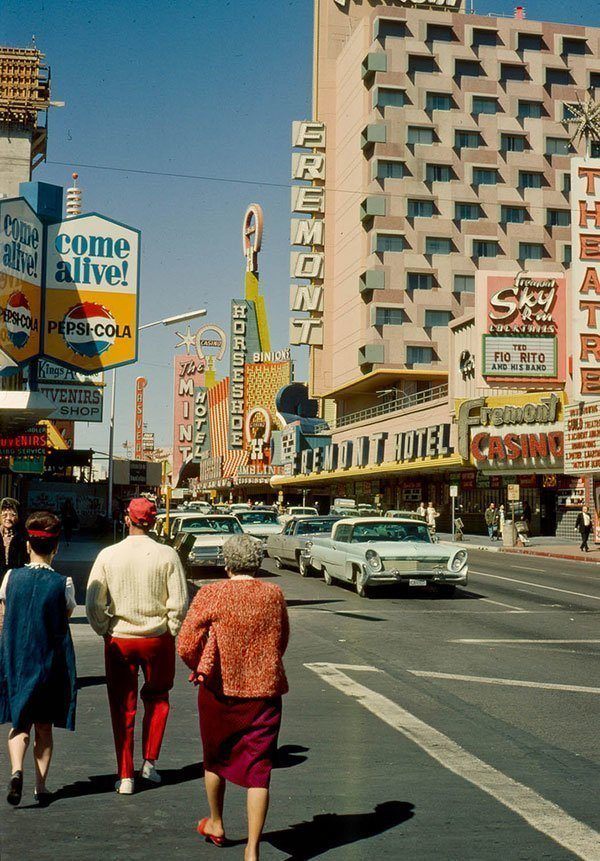 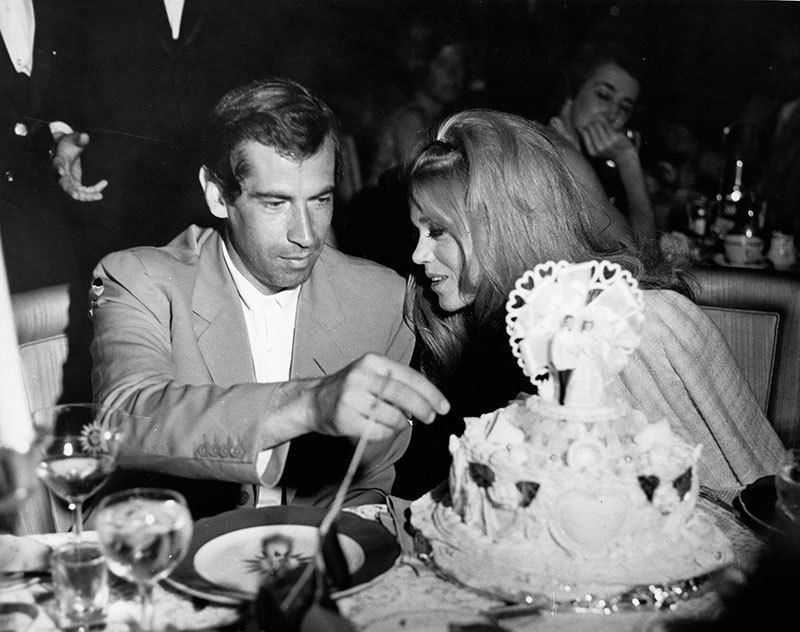 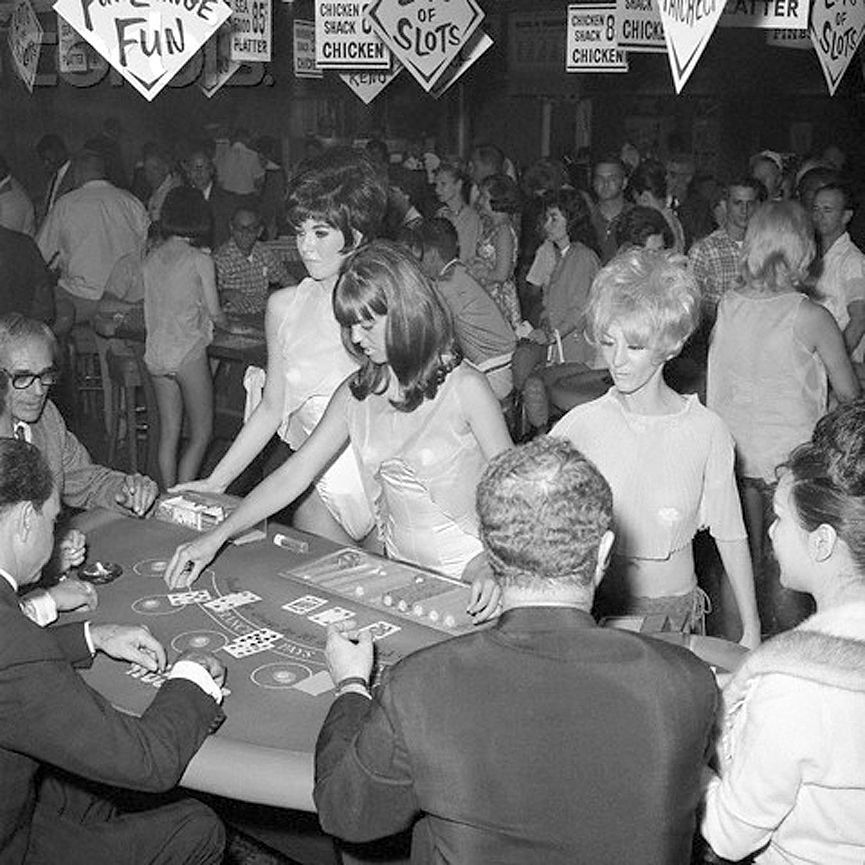 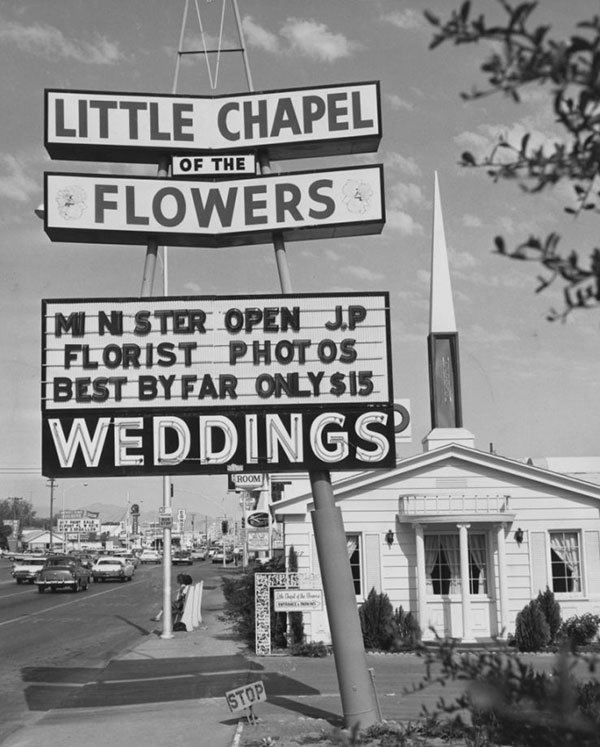 In 1970, couples could get married at The Little Chapel of the Flowers for just $15. Source: SFGate 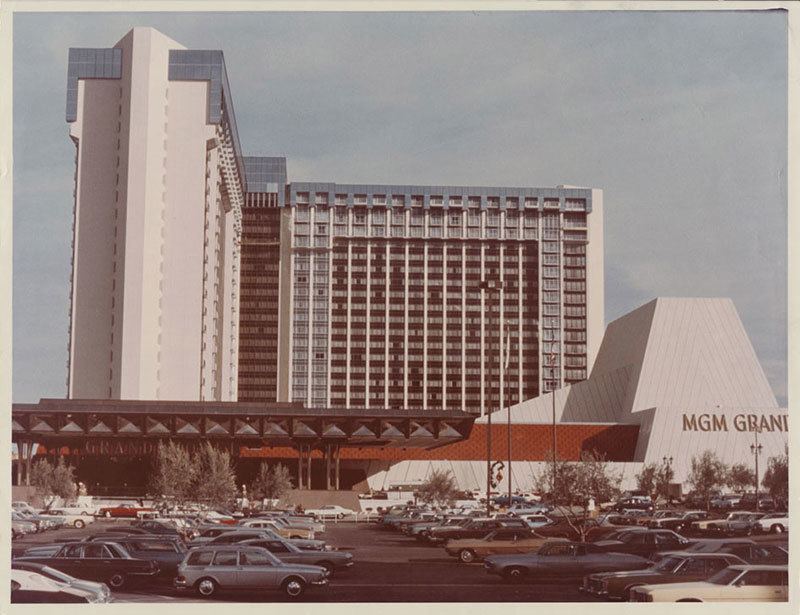 The old MGM building in the 1970s, before the fire that claimed 85 lives in November of 1980. Source: Vintage Las Vegas 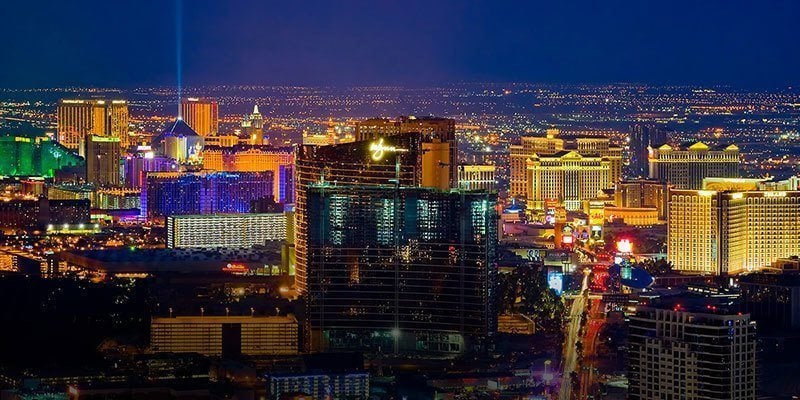 In 1950, most hotels and casinos were located on Fremont Street. See the street in action in A Last Frontier: Las Vegas, 1950:

Growth in Las Vegas in the 1960s was unmatched. Check out this brief history of the decade: