The Extraordinary Life Of Betty Reid Soskin, America’s Oldest Park Ranger Who Is Retiring At Age 100

Betty Reid Soskin endured segregation, contributed to civilian efforts during World War II, and founded one of the first Black-owned record stores — all before becoming the oldest park ranger in America. 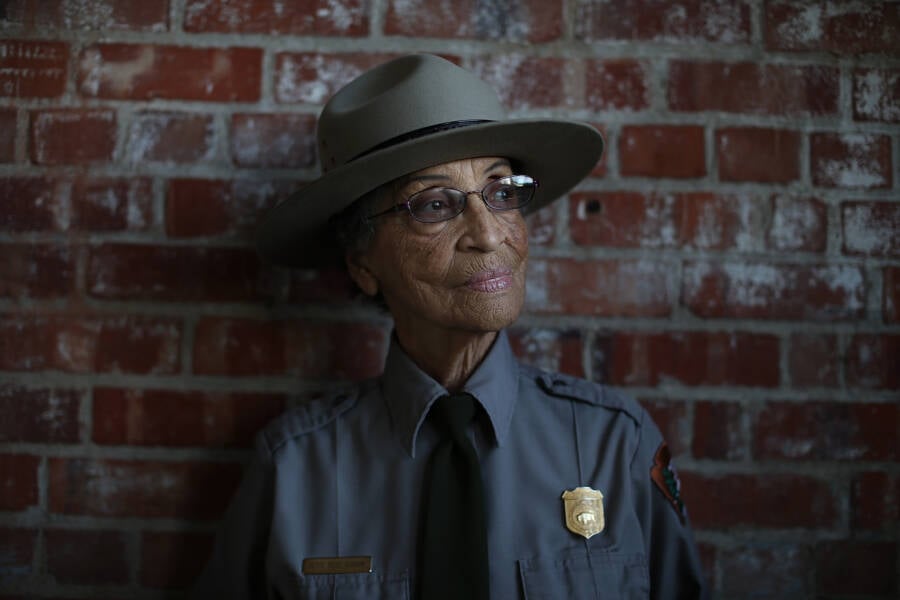 When the National Park Service hired Betty Reid Soskin in 2006, they found a treasure trove of Black American history. She had endured segregation, worked as a wartime file clerk, and participated in activism during the civil rights era. Soskin has shared those stories with visitors for the last 15 years, and last week the 100-year-old retired as the country’s oldest active park ranger.

Soskin had spent more than a decade working at the Rosie the Riveter World War II Home Front National Historical Park in Richmond, California. According to CNN, the park’s purpose is to educate visitors about the wartime contributions of American civilians — and Soskin’s own life experiences made her the perfect guide.

From working at a segregated shipbuilder’s union to founding one of the first Black-owned record stores, Soskin lived a full life before becoming a park ranger in her 80s. While meeting President Barack Obama at the White House in 2015 was an exciting milestone, Soskin found her truest purpose as a ranger.

“To be a part of helping to mark the place where that dramatic trajectory of my own life, combined with others of my generation, will influence the future by the footprints we’ve left behind has been incredible,” said Soskin.

Betty Reid Soskin was born Betty Charbonnet on Sept. 22, 1921, in Detroit, Michigan. Her parents were Catholics from Louisiana and came from Cajun and Creole backgrounds. Soskin’s great-grandmother was born into slavery in 1846, and Soskin herself experienced the institutional racism that still abounded 100 years later. 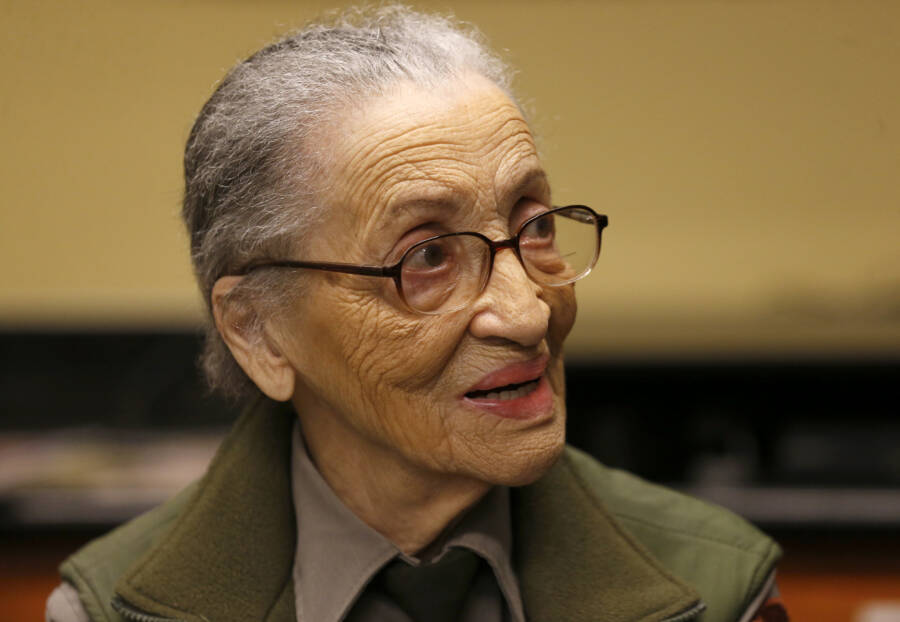 Soskin spent her early childhood in New Orleans but moved to Oakland, California, at the age of six. She graduated from Castlemont High School before embarking on a life of service. As reported by NPR, Soskin was 20 years old when she became a shipyard clerk for an all-Black auxiliary lodge of the Boilermakers union.

Despite the fact that people of color were not allowed to join the union as regular members, Soskin felt it was her duty to aid in civilian efforts during World War II. She spent most of her time filing change of address cards for the workers — who were constantly moving as the war raged on.

Soskin also found time for love. After briefly dating baseball legend Jackie Robinson, she met a man named Mel Reid and fell head over heels. The couple married in 1943 before founding Reid’s Records together in June 1945. The Berkeley, California, business was one of the first Black-owned music stores and specialized in soul and gospel music. It stayed in business for nearly 75 years before closing in 2019.

Betty Reid Soskin went on to have four children, and she and her husband wanted to settle in a nice neighborhood with their family. But they endured death threats while building a home in the all-white suburb of Walnut Creek. This inspired her to write protest songs during the civil rights movement and work as a political staffer in the 1960s. However, decades later, she found her true calling as a ranger.

Betty Reid Soskin and Mel Reid divorced in 1972, and she later married William Soskin, a psychology professor at the University of California, Berkeley. The resourceful activist continued her political work and became a field representative for state assemblywoman Dion Aroner. 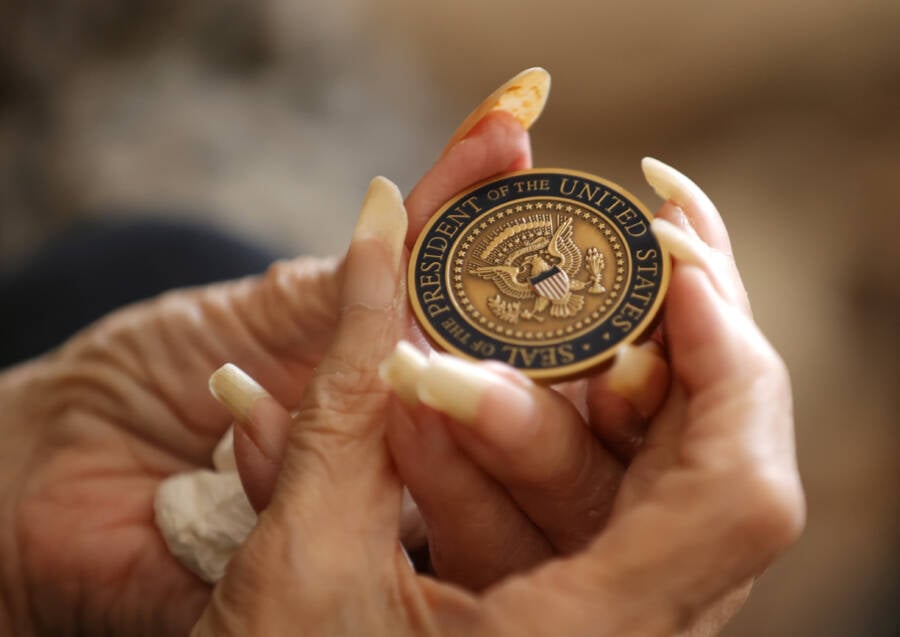 Justin Sullivan/Getty ImagesSoskin with the coin given to her by President Barack Obama.

While working for Aroner, Soskin was tasked with helping develop a park that commemorated the contributions of women during World War II. She did such an incredible job that the California State Legislature named her Woman of the Year in 1995 — and the World War II Museum in New Orleans awarded her a silver medallion.

Rosie the Riveter World War II Home Front National Historical Park was completed in 2000. Though Soskin played a key role in developing the park, she couldn’t relate to its titular icon. “That really is a white woman’s story,” she once said. “There were no Black Rosies.” After all, Black women had been working outside of the home for centuries.

Betty Reid Soskin was eager to highlight the contributions of Black Americans during World War II, so she left her political job in 2003 and began working with the park service through a third-party grant in an effort to diversify the park’s educational content. According to CBS News, her drive and ambition led the park service to offer Soskin a part-time job in 2006 when she was 84 years old — and give her a permanent position as a park ranger in 2011.

“Being a primary source in the sharing of that history — my history — and giving shape to a new national park has been exciting and fulfilling,” said Soskin. “It has proven to bring meaning to my final years.”

The Legacy Of Betty Reid Soskin

Betty Reid Soskin has spent the last 15 years regaling visitors at the California park with the true histories of Black Americans. She has used her own experiences of discrimination and segregation to breathe life into those accounts and has headed public programs, led tours, and hosted countless discussions at the park. 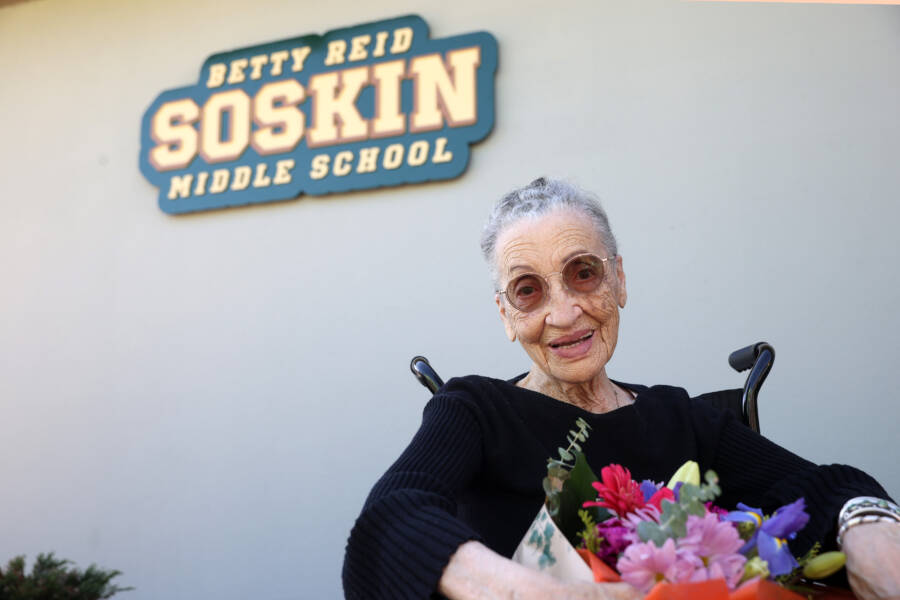 Justin Sullivan/Getty ImagesSoskin at the El Sobrante, California, middle school named in her honor during her 100th birthday celebrations in September 2021.

“She has used stories of her life on the Home Front, drawing meaning from those experiences in ways that make that history truly impactful for those of us living today,” said Naomi Torres, the acting superintendent of the park.

Soskin’s legacy was already so colossal by 2015 that she was chosen to introduce President Obama at the White House Christmas tree-lighting ceremony. In Soskin’s pocket was a photo of her enslaved great-grandmother.

“It’s a kind of experience that covers years, and decades, and centuries,” said Soskin.

Betty Reid Soskin’s 100th birthday last September coincided with the opening of a middle school named in her honor in El Sobrante, California. While she officially retired on March 31, 2022, the park she so loyally guarded and helped build will hold its own celebrations on April 16 — and rightfully honor the country’s oldest park ranger.