The 118 silver coins were found buried in a farmer's field in the Polish town of Biskupiec, and are believed to have been connected to the Siege of Paris in 845 A.D. 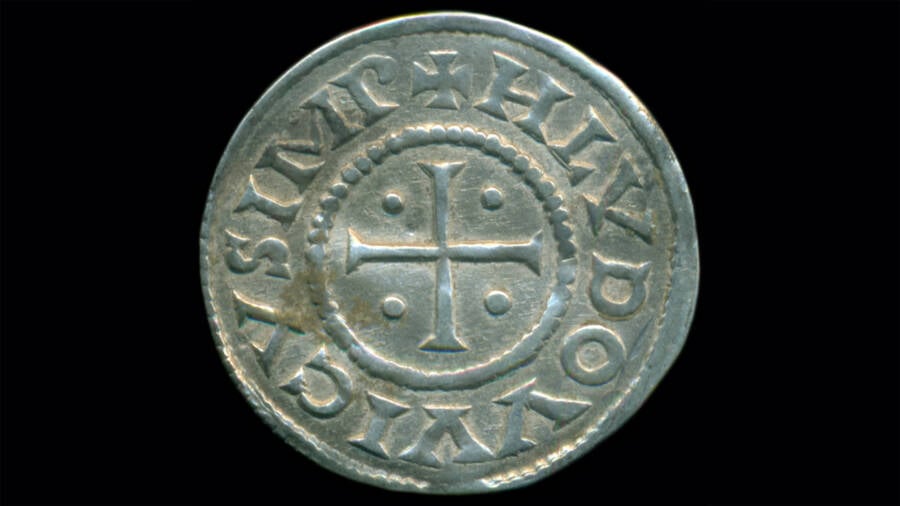 Museum of OstródaNo markings specify where the coins were minted, but it’s clear by the Latin inscriptions and cross in the center they hail from the Carolingian Empire.

Archaeologists in the Polish town of Biskupiec have just uncovered 118 silver coins from the ninth century. Minted by King Charlemagne’s Carolingian Empire, only three such coins have ever been found in Poland before. Some believe this latest trove was ransom payment — to stop a Viking horde from sacking Paris.

The coins in question are rather distinct, according to LiveScience. With a crucifix adorning their centers and Latin inscriptions on the perimeter, it’s clear they hailed from the empire of Frankish King Charles the Great. He reigned over Germany, Switzerland, Northern Italy, and most importantly — much of modern-day France.

With the coins dated to 1,200 years ago, their minting predated the Siege of Paris in 845 A.D., according to Academia. That historic event not only occurred during the Carolingian Empire’s rule across eighth and ninth centuries, but marked the first example of “Danegeld” — payment to pilfering Vikings in exchange for safety.

“If a larger number of the coins can be attributed to Paris, then yes, it is possible — and some have already been attributed to Paris,” said University of Warsaw archaeologist and coin expert Mateusz Bogucki. “[But] it is way too early to give such an interpretation.” 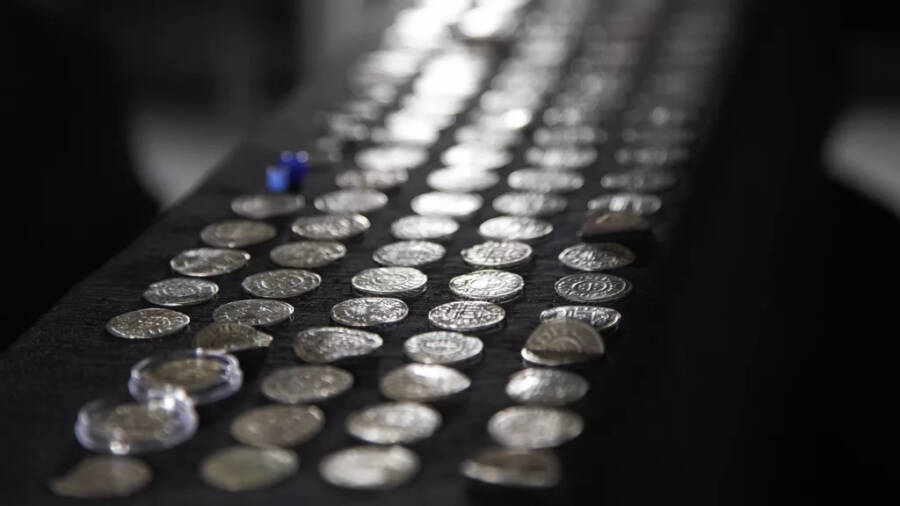 Museum of OstródaThe coins were put on display in mid-May but are still being researched by experts.

All 118 of these coins were minted under the Carolingian Empire. Experts have since attributed 117 of them to Charlemagne’s successors King Louis the Pious who reigned from 814 to 840 A.D. and one to King Charles the Bald who ruled until 877 A.D. It’s still unclear what year exactly the coins were used, however.

What is clear is that their discovery was made during excavations in November 2020 and March 2021. After receiving permission from the local government to comb the Biskupiec farm, experts with metal detectors found the first handful of coins — and kept it secret until officials from the Museum of Ostróda were notified.

By March 2021, Museum of Ostróda archaeologist Lukasz Szczepański and his team unearthed the rest. He explained that the find was certainly unusual unusual, according to Science in Poland. While only three individual coins were found in the past, it is curious where that particular find was made.

Two of those three individual coins were attributed to King Louis the Pious and were unearthed in Truso. That particular site was a Viking trading post — and lay only 60 miles from the Biskupiec site that yielded the recent batch of 118 silver coins. Experts are now trying to assess who buried them and what they paid for. 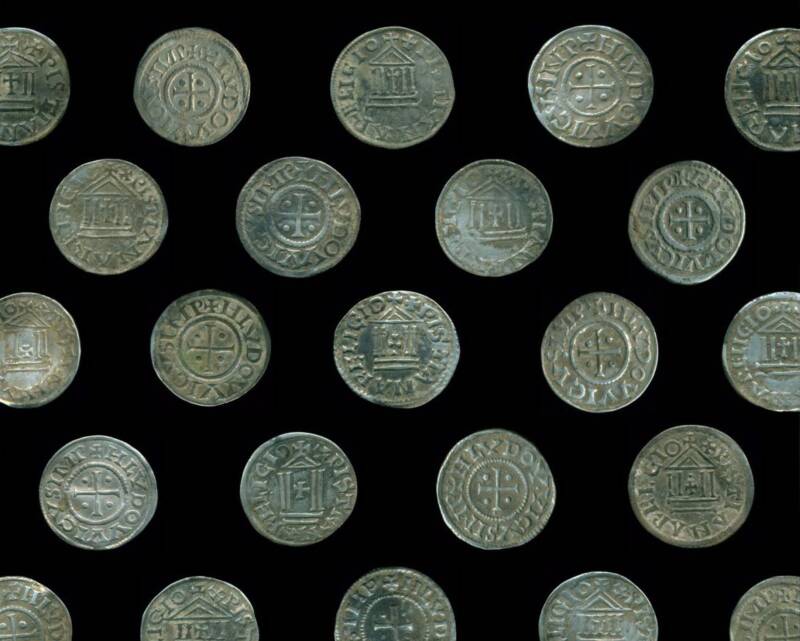 Museum of Ostróda117 coins were attributed to King Louis the Pious, and one to his son, King Charles the Bald.

Perhaps most curious, Bogucki explained that the first medieval Polish kingdom hadn’t even existed when these 118 coins were lost or buried. The predominant silver in the region at the time was Arabian, as Slavic tribes littered the region and used money to buy slaves from Muslim traders.

Bogucki believes the coins in question where obtained in Truso, where the Vikings traded in fur, slaves, and amber. He also said it’s likely that the coins were on their to Truso in order to buy some of those goods or people. No marks on the coins specify where they were minted, with only the Latin inscriptions of any use.

One of the current theories being bandied about by experts is that these coins originated from Truso and were used as ransom payment by King Charles the Bald to Vikings whose raid on Paris was underway. It wasn’t uncommon for Norse raiders to sack the Frankish heartlands, as the Siege of Paris confirms.

Much of our understanding of that incident in 845 A.D. stems from historical records compiled by monks. Bogucki explained that Charles the Bald reportedly paid the Vikings 7,000 livres (more than five tons of silver and gold) to satisfy their need of invasion — and that the 118 coins from Biskupiec were part of that. 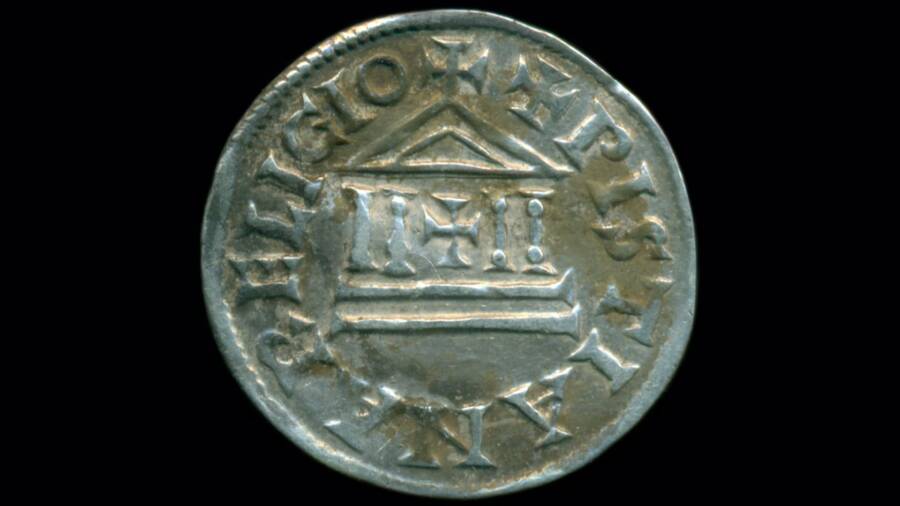 Museum of OstródaExperts believe the coins were either used to buy goods from Vikings or as ransom to keep them from invading Paris.

“The functioning of the settlement in Truso and the related activity of the Vikings is currently the most readable clue that may indicate how the treasure reached the territory of ancient Prussia,” said Szczepański.

“In the 9th century, we notice a clear increase in the threat posed by the Vikings taking part in the invasions of Western Europe. For example, Paris is besieged in 845. At the same time, the Scandinavians are activating trade in the Baltic zone.”

The historic treasure has already been seen by some of the public. The coins were put on display in the Museum of Ostróda a few weeks ago, as researchers continue their work. Their goal remains to analyze the remarkable find and attempt to answer the questions remaining about its provenance.

After reading about the 118 silver coins unearthed in Poland, learn about the stolen Nazi silver found buried at a 14th-century castle. Then, read about 32 Viking facts that reveal one of history’s most misunderstood civilizations.