The German battleship Bismarck was the most formidable warship in Europe. But on May 27, 1941, the combined effects of torpedo damage and scuttling left it at the bottom of the Atlantic. 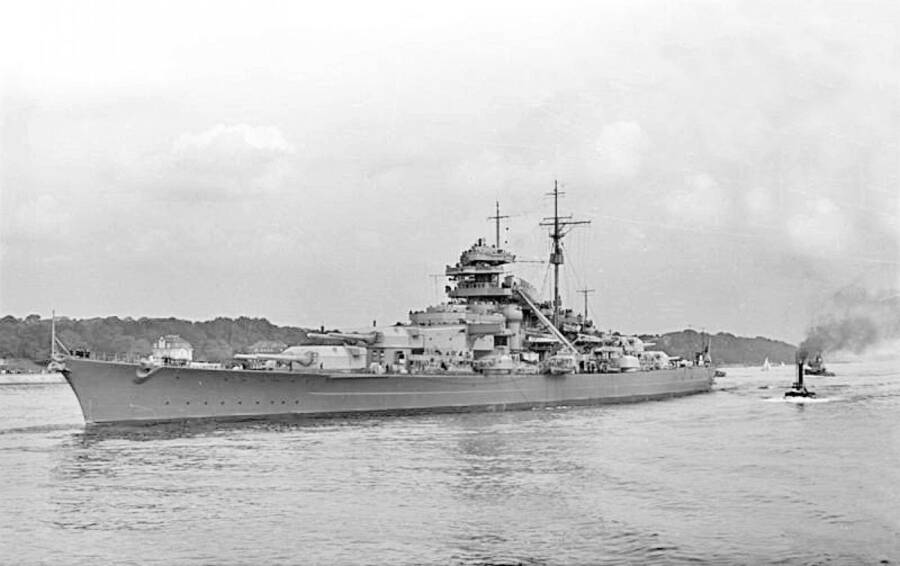 German Federal ArchiveThe German battleship Bismarck was the most powerful ship in Europe when it was launched at the beginning of World War II.

When the Nazis finished its construction, the German battleship Bismarck was the most powerful warship in Europe. Commissioned in 1940, Bismarck immediately posed a lethal threat to both Allied shipping and the British navy. But eight days into Bismarck‘s maiden mission to intercept supplies carried to England, the British navy brought it down in a mission that was part strategy and part revenge.

In its first days of combat, Bismarck sunk HMS Hood, England’s legendary flagship, prompting the British to throw everything they had at their new German foe. The pursuit that followed was a race against time to chase down the German ship. The chase culminated in an epic battle between the lone Bismarck and the entire power of the British Atlantic Navy.

After the British prevailed and the great German battleship sank, it took until 1989 to discover the Bismarck wreck. Constructed with nearly unparalleled strength, the wreck was so well-preserved that the swastikas the Nazis had painted on its fore and aft decks were still clearly visible.

But no matter how well built it was, that didn’t stop it from going down just a week into its fighting career. This is the story of the KMS Bismarck.

The Historic Construction Of The Battleship Bismarck 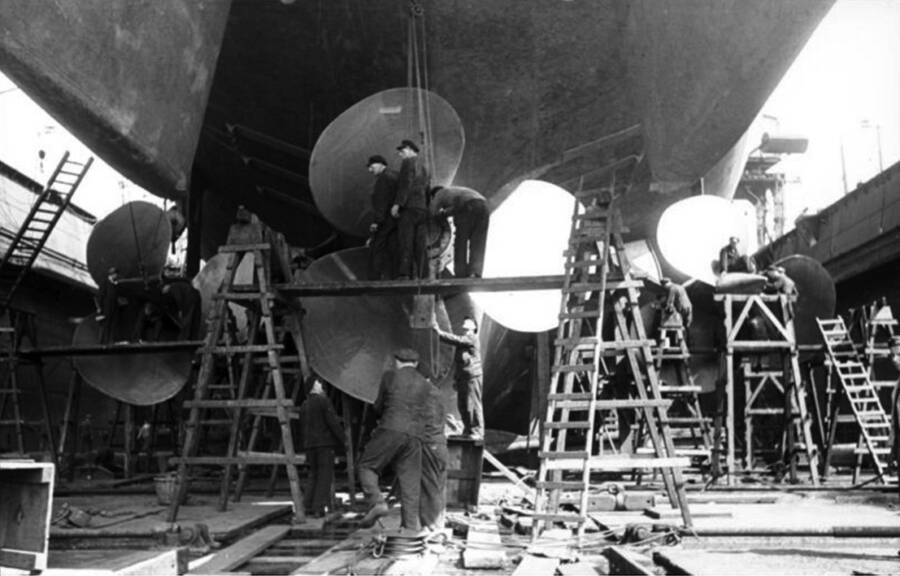 German Federal ArchivesBismarck under construction in a Hamburg dry dock, 1939.

KMS Bismarck was Germany’s first large battleship constructed after World War I. The first pieces of the ship were laid down on July 1, 1936, three years before the start of World War II. By 1939 it was seaworthy and was officially launched at a ceremony attended by Adolf Hitler.

Work on the top decks was not completed for another year, however, and it took until 1940 for Bismarck to begin sea trials and receive an official commission in the Nazis’ Kriegsmarine.

Hitler named the ship after Otto von Bismarck, the famous 19th-century Prussian chancellor who unified Germany. Along with her sister ship, KMS Tirpitz, the Kriegsmarine Bismarck was among the largest and fastest battleships of the period.

And it was more powerful than any ships the British Royal Navy had. Bismarck was 824 feet in length, close to three football fields.

Bismarck was protected by thick armor. The largest artillery guns were 15 inches wide. Up to four seaplanes could be housed and used for reconnaissance missions. Over 2,000 sailors worked and lived on the ship. All but 118 of them would perish.

And just before Bismarck sailed, the Nazis painted giant swastikas on its decks nearly the entire width of the ship, remnants of which were still visible at the Bismarck wreck site 400 miles off the coast of France when Robert Ballard discovered it in 1989.

What Europe’s Most Powerful Warship Was Built To Do 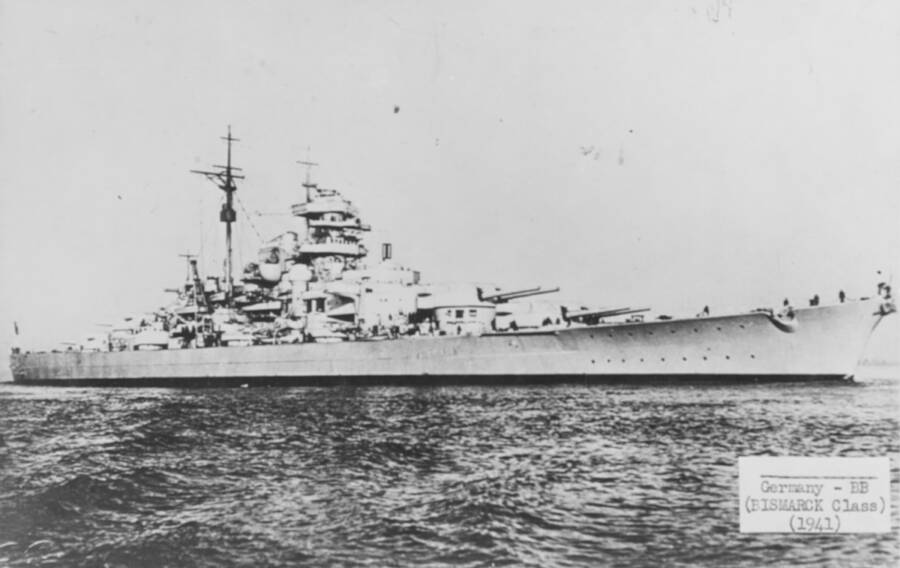 U.S. Naval Historical CenterBoth the British and American Navies knew Bismarck was a formidable threat to supply lines in the Atlantic.

Although KMS Bismarck was the most powerful battleship in Europe at its launch, Britain still had the largest navy, far surpassing Germany in number of warships. Nazi Grand Admiral Erich Raeder understood this and strategized German naval strategy around this fact.

The U-boat was the primary weapon of the German navy. These submarines patrolled the North Atlantic Ocean, hunting for enemy shipping bringing supplies from North America to Britain. When Allied convoys were spotted, packs of U-boats would swarm the area, launching a frenzy of torpedoes — the goal was to starve Britain into surrender.

Bismarck‘s first mission was to aid the U-boats. Outnumbered, the Germans did not want open combat against British warships. Instead, the battleship was to be deployed for raids on Allied shipping. The strategy was to launch quick strikes, then slip back into the anonymity of the large ocean.

That was the game plan for Operation Rheinübung, which began on May 18, 1941. The Bismarck battleship, accompanied by a smaller cruiser, Prinz Eugen, first landed in German-occupied Norway. After refueling, they headed towards Iceland and then to open waters of the Atlantic. However, the two ships were spotted, and the British navy was alerted.

The British Reaction To The Battleship Bismarck 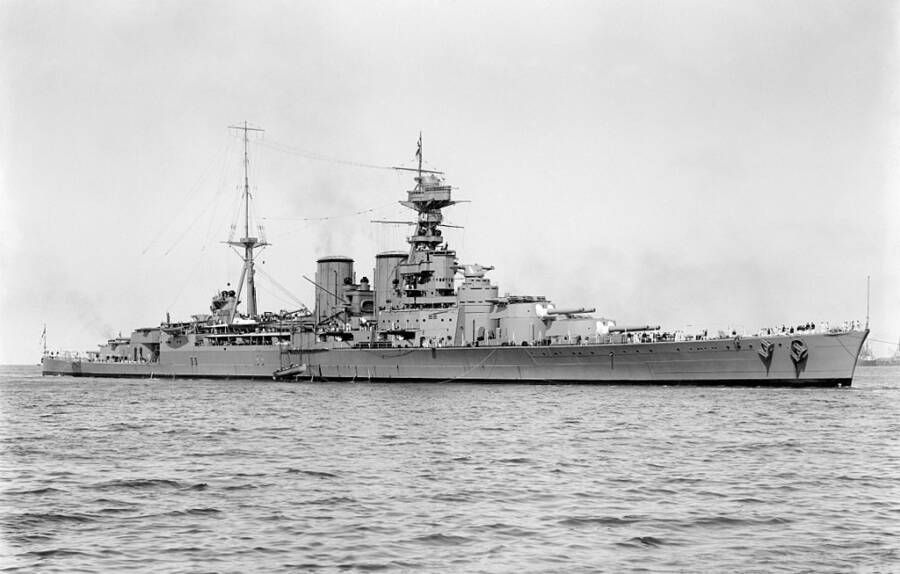 State Library of VictoriaBy the time Bismarck was launched, its most serious challenger was the 20-year-old HMS Hood, photographed here in 1924.

HMS Hood was laid down during World War I and completed in 1920. At the time, Hood was the largest ship in the British fleet and nicknamed the “Mighty Hood.”

Similar to Bismarck, Hood had powerful 15 inch guns. It could also speed up to 30 knots. Nearly 1,500 sailors worked aboard the vessel.

There were important differences between the rival ships, however. Hood was technically not a battleship but a battlecruiser. To gain speed, less protective armor was built over Hood‘s deck. While gun sizes were similar, the battleship Bismarck had more advanced weaponry.

Bismarck was a modern ship, while Hood, at over 20 years old, was showing her age. Hood‘s companion, Prince of Wales, was a modern but much smaller battleship.

The Battle Of Denmark Strait 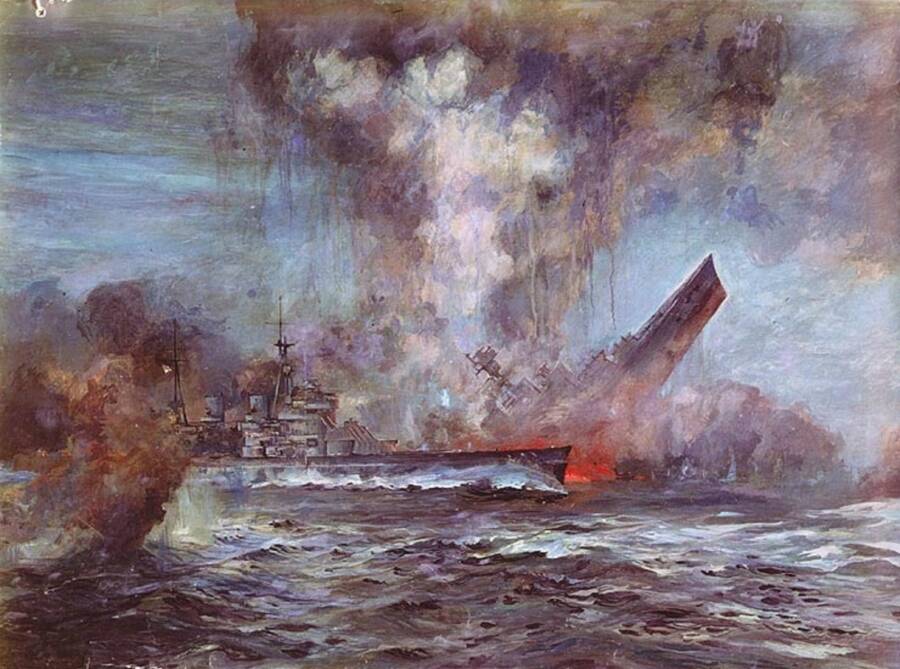 Under Admiral Günther Lütjens, KMS Bismarck and Prinz Eugen sailed through Denmark Strait, between Iceland and Greenland, on their way to the Atlantic. Early in the morning on May 24, Hood and Prince of Wales approached to intercept.

Approximately 13 nautical miles away and closing in, the two British ships first opened fire. A few shells managed to hit Bismarck. One blast from Prince of Wales blew up an access to Bismarck‘s fuel tanks, causing oil to start leaking from the Nazi ship.

Approaching nine nautical miles, the Germans fired back. A first volley caused minor damage to Hood. The second shots from Bismarck had a direct impact, piercing the lightly armored deck and detonating stores of ammunition beneath. A giant explosion occurred, throwing flames hundreds of feet into the air and cracking Hood in half.

Within minutes, Hood was underwater. All but three sailors aboard perished. One of the survivors, Able Seaman Bob Tilburn, hid behind a projectile launcher while explosions ripped the ship apart.

“One sailor was simply blown away by the force of the explosion while the other was disemboweled by a shell splinter,” recalled Tilburn. The skirmish had lasted less than half an hour.

Prince of Wales also sustained damage but was able to escape the battle. Meanwhile, Bismarck had lost speed and was leaving a trail of seeping oil in her wake. Admiral Lütjens ordered Bismarck to race for the French port of Saint-Nazaire for repairs.

Prinz Eugen went in a separate direction to refuel. It was the last time the ships saw each other before the wreck of the Bismarck battleship.

The Furious Pursuit Of The Battleship Bismarck 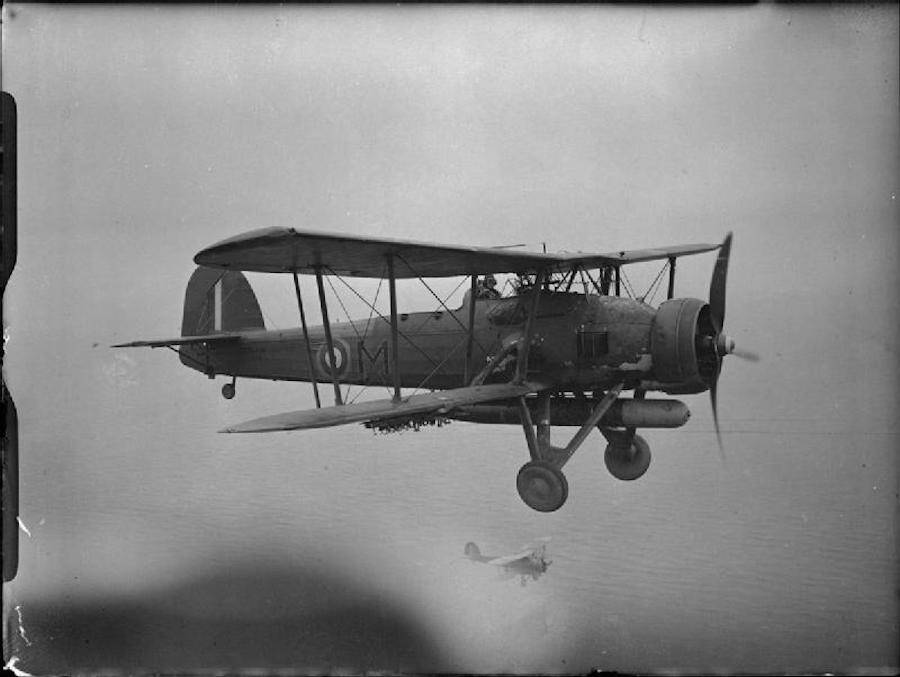 While KMS Bismarck celebrated victory over Hood and raced for the coast of France, the British reeled from the loss of their signature ship. They made renewed efforts to find and sink the battleship Bismarck and threw all available warships into pursuit.

At one point, two aircraft carriers, eight battleships, numerous cruisers and destroyers were looking for the German ship. Some warships being used to protect shipping convoys were rerouted to find Bismarck.

There were a few initial sightings and light attacks, but Bismarck managed to sneak away each time. At one point, Admiral Lütjen’s radio transmissions to German high command were intercepted by the British, but aerial reconnaissance was initially unable to spot any trace of the ship.

Finally, a Catalina flying boat spotted Bismarck from the air on May 26. Bismarck was about 700 miles from the French coast. In one more day, German air cover could be sent from France to defend the battleship. Britain had to act quickly.

The closest aircraft carrier was HMS Ark Royal. On the carrier’s deck were slow and obsolete Swordfish torpedo bomber biplanes that flew at no more than 100 miles per hour.

And yet, it was a single torpedo fired from one of these planes that would ultimately lead to the wreck of the battleship Bismarck.

How The Battleship Bismarck Was Finally Sunk 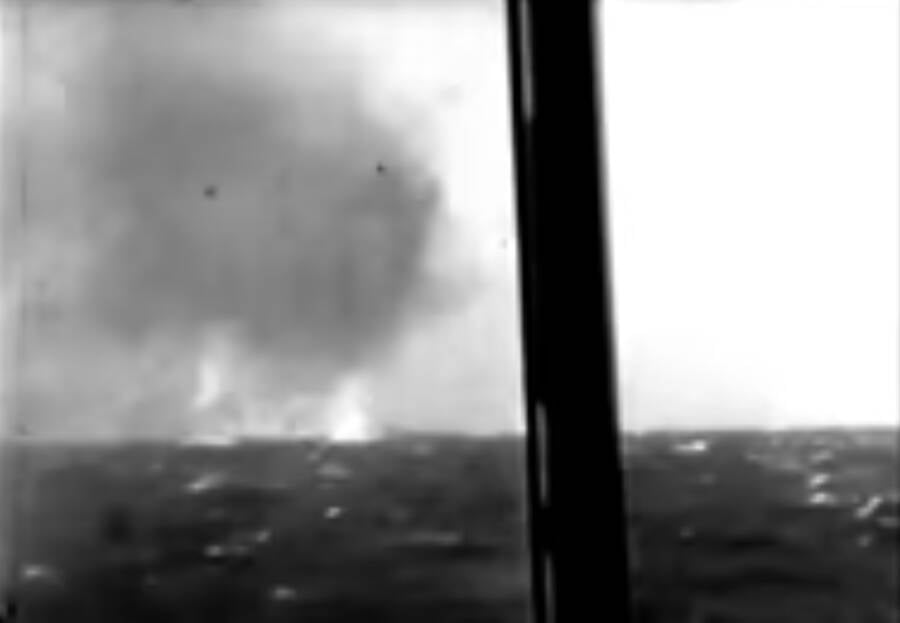 YouTubeNewsreel footage shot from HMS Renown showed Bismarck‘s last moments as it burned and sank on May 27, 1941.

The first Swordfish sortie from Ark Royal on May 26 nearly attacked one of their own battleships. A second launch came later in the day. The British sent three waves of biplanes. It was cloudy. There were gale-force winds, and the waves of the Atlantic surged 25 to 40 feet high.

The first two biplane waves landed some hits on Bismarck but caused minimal damage. The last wave of five Swordfish dropped their torpedoes. Bismarck made evasive maneuvers, but one torpedo hit the ship’s rudder, jamming it. This left Bismarck stuck in the ocean, unable to steer or move.

More British warships caught up on the morning of May 27. Battleships King George V and Rodney, along with battlecruiser Renown, opened fire from 12 miles away as they quickly closed in.

Bismarck‘s guns were destroyed, leaving it unable to return fire. Further rounds of shells penetrated the ship’s heavy armor. Within an hour, Bismarck was severely damaged, listing hard to port and on fire. 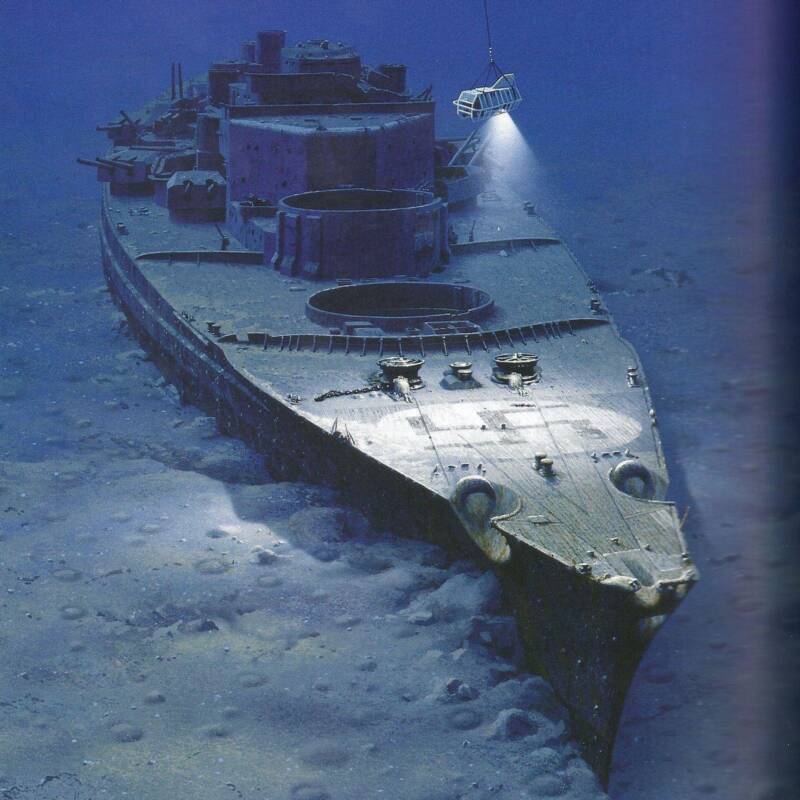 RedditA depiction of the battleship Bismarck wreck by Ken Marschall.

Allegedly, in order to keep Bismarck out of British control, the surviving crew scuttled the ship. And although the physical evidence from the wreckage makes it unclear whether the attempt was successful or if the charges the Germans set were ignited accidentally, the result was the same: Bismarck sank.

Only 118 German sailors survived the battle and were later picked up by British ships.

Following the sinking of Bismarck, the Germans never again used their surface warships against Allied shipping. For the duration of the war, only U-boats remained a threat.

In 1989, underwater exploration undertaken by Robert Ballard discovered the German battleship Bismarck wreck site. Ballard and his team found the Bismarck wreck at the bottom of the Atlantic ocean, three miles below the surface and 400 miles from the coast of France.