In the 1960s, Eric Edgar Cooke murdered at least eight people in Perth and sometimes even dabbled in necrophilia — until he was finally caught. 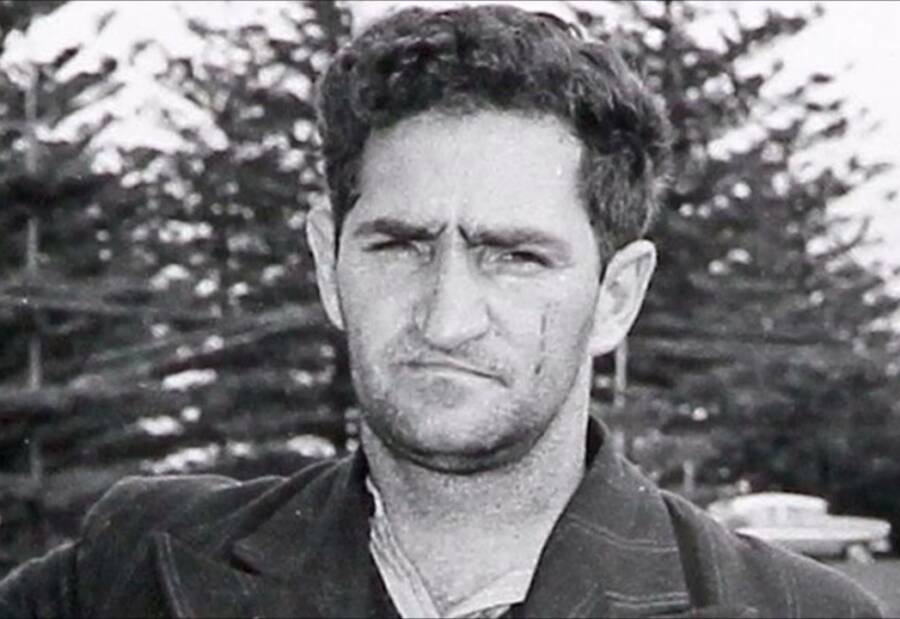 Young Eric Edgar Cooke, of Perth, Australia, just wanted to fit in. Shy, awkward, and ashamed of his appearance, he was mercilessly made fun of by peers due to his cleft lip and nervous nature. He eventually took to wandering the streets at night to escape his abusive home life.

And as an adult, Cooke would walk these same streets every night — but for more sinister reasons. He would lurk in the shadows and kill at will, taking out anyone that struck his fancy. From frenzied stabbings to cold-blooded shootings, Cooke terrorized Perth in the early 1960s, unleashing his rage in depraved ways.

And in the end, police would put an end to Cooke’s reign of terror — by luring him with a literal fishing line. 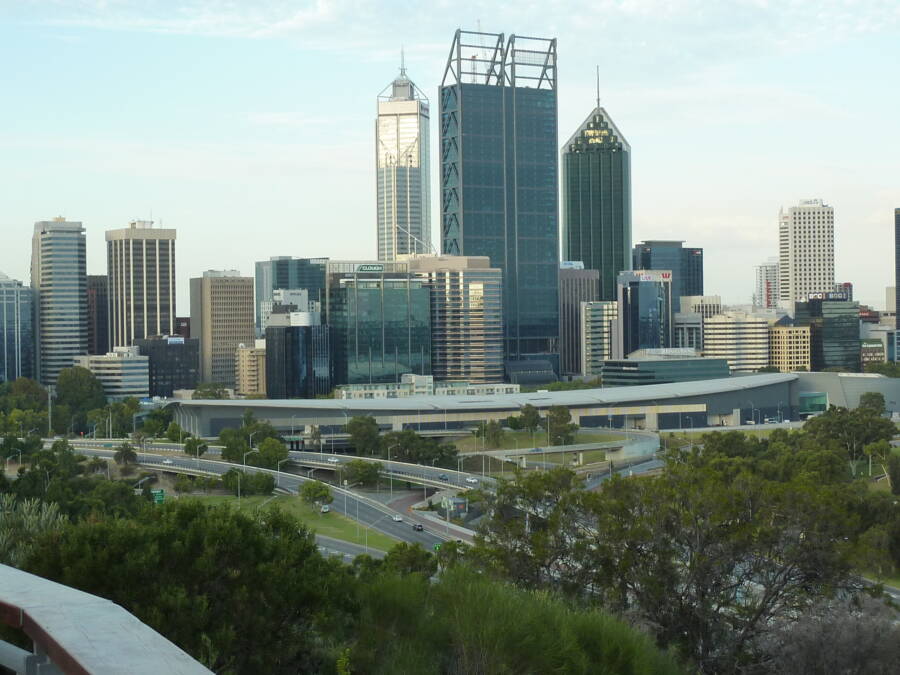 Wikimedia CommonsThe city of Perth today. Eric Edgar Cooke held it in a grip of fear in the early 1960s.

Eric Edgar Cooke was born in February 1931, the eldest of three children. All of them would be forced to endure their father’s violent temper — but especially Cooke.

His father was an alcoholic who showed no natural care or interest toward his oldest child unless it involved a beating. Cooke would also be beaten when he would try to protect his mother from enduring the same violence.

Young Cooke had nowhere to escape from torment, it seemed; not only was he abused at home, but he was mercilessly bullied at school. He had a noticeable cleft lip and palate, both of which made him insecure and awkward among his peers.

He’d had operations to repair his cleft palate, which left a visible scar above his lip. Cooke was all too aware of the perceived imperfection on his face, which caused him to become introverted and talk in a quiet, low mumble.

To avoid the routine beatings from his father, he would roam the streets at night, and when he did return home, he’d hide underneath the house.

As a teenager, Cooke’s frustration at rejection from just about everyone in his life would culminate in him burning down the local church. He did this after he auditioned to join their choir but was denied. For this crime, he would serve 18 months in jail.

He began to engage in petty crime, breaking and entering, and stealing from houses in the local area. Cooke would even cut out newspaper clippings of his crimes and show proudly show them off, figuring his peers would be impressed.

Despite his penchant for low-level crime, things eventually seemed to be heading in the right direction for Cooke. As he arrived at adulthood, joining the Permanent Military Forces at 21, he hoped for a clean slate and to be accepted finally.

However, Cooke’s hopes of putting rejection and loneliness behind him were short-lived: Three months after joining the military, he was discharged. His convictions for theft, break-ins, and arson had caught up with him. 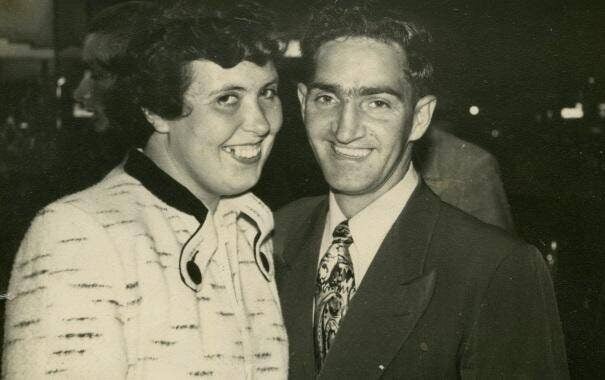 PinterestCooke and his wife Sarah (also known as Sally).

Almost out of nowhere, and while still living a family life, Eric Edgar Cooke escalated from break-ins and theft to brutal and merciless killings. He had no set M.O., killing seemingly at random, and his ways of snuffing out his victims varied.

His bizarre killing spree involved numerous hit-and-runs, bloody stabbings, strangling, and shootings — and left Perth utterly terrorized by an unknown maniac. Cooke’s behavior was strange and inconsistent for a killer, which threw the police off the scent, although it remains unknown if this was intentional.

The shootings that Cooke carried out were executed with several different rifles. When he murdered up-close, he varied his weapons. Some victims were stabbed with knives or scissors; others were brutally swung at with an axe. As the bodies piled up, it seemed Cooke’s depravity was also climbing.

One evening he knocked on a random door and shot the homeowner when they answered. Another time, he killed his innocent victims after they woke up while he was burglarizing their homes. On another occasion, he broke into a property and shot a couple as they slept, leaving their home and belongings intact.

Cooke reportedly took the time to relax with a glass of lemonade after slaughtering one early victim — and his depravity was steadily escalating.

One evening, Cooke even descended into necrophilia. Emerging from the shadows, he broke into a woman’s house with the intent of killing her.

After sneaking up on the vulnerable woman, he pulled the cord from her bedside lamp and wrapped it firmly around her neck, holding it tightly until she went limp. Satisfied she was dead, but still lustful for wickedness, Cooke raped his victim’s lifeless body.

Still, Cooke wasn’t done. He dragged the woman to a neighbor’s lawn, where he violated her with an empty whisky bottle. He even tucked the bottle into the woman’s hand, as if she had somehow died in a drunken incident.

How The Police Caught The “Night Caller” 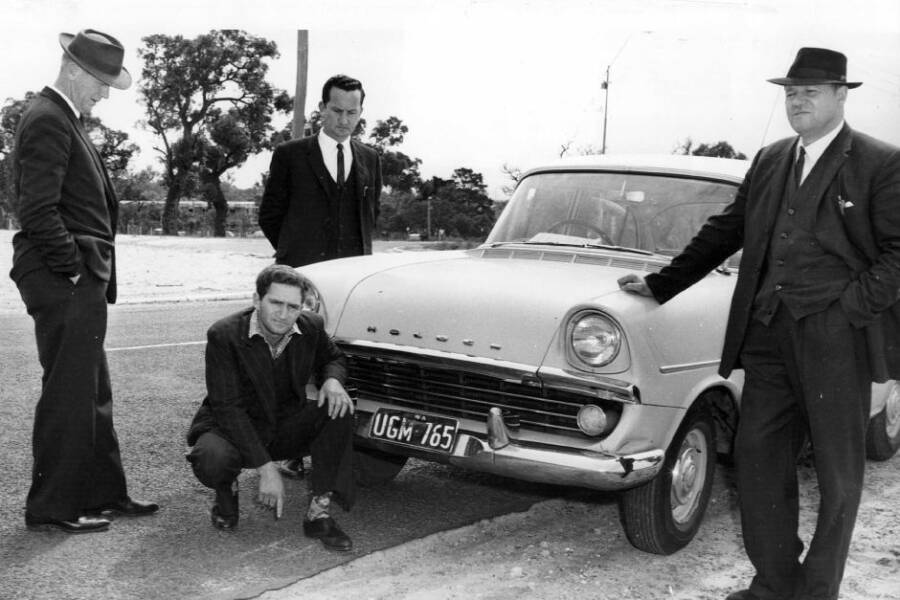 PinterestCooke showing police the scene of a hit-and-run.

In the 1960s, people often felt secure enough to often leave their keys in their cars’ ignition overnight, and Eric Edgar Cooke took advantage of this. Almost every night, he stole a car, only to return it before the owner woke up in the morning.

However, Cooke didn’t always just take the car for a joyride; police would later discover that some of the vehicles he stole were involved in several hit-and-runs.

Meanwhile, police were working hard to snare the man who’d been terrorizing Perth. During their investigation, more than 30,000 males aged over 12 were fingerprinted, and more than 60,000 .22 rifles – the type Cooke used in some of his murders – were located and test fired. 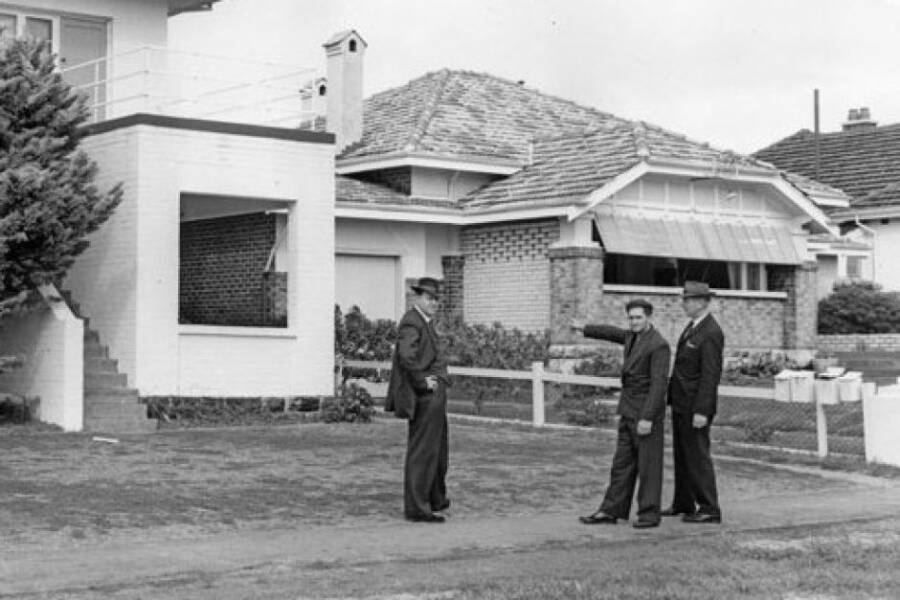 FacebookCooke pointing to a house where he shot a man dead.

A suspicious rifle was found hidden in a bush in August 1963. Subsequent ballistic tests proved without a doubt that the gun had been used in the murder of Shirley McLeod. Police were now ready to trap The Night Caller by returning to the location and tying a similar-looking (but completely inoperable) rifle to the bush with an (almost) invisible fishing line. Police waited in this makeshift hide for the killer to come and collect this weapon. Days passed with no bite on the line. Days turned into weeks.

Seventeen days later, Eric Edgar Cooke leisurely walked over to the bush to collect his concealed gun. The police had finally snared the man who’d put fear into Perth for four years.

Despite initially denying any involvement in any crimes, it didn’t take long for Cooke to break and confess to everything. He offloaded 22 violent crimes to police, including eight murders and 14 attempted killings.

In his detailed confessions, Cooke admitted to more than 250 break-ins and burglaries, with remarkable detail.

What Happened To Eric Edgar Cooke? 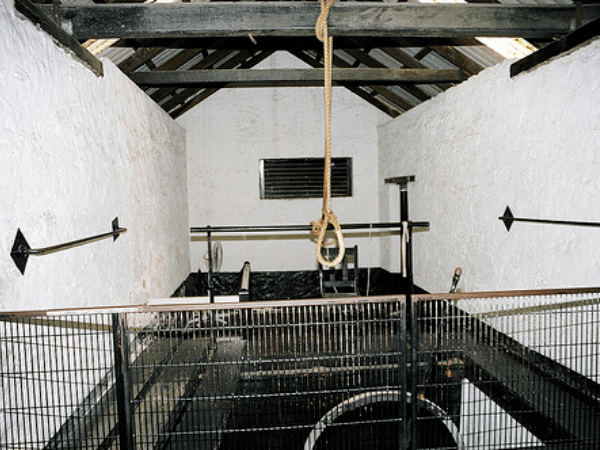 Beamish’s appeal was also dismissed after the judges cross-referenced Cooke’s confession with the one used in the Button appeal. West Australia Chief Justice Sir Albert Wolff referred to Cooke as a “villainous unscrupulous liar,” and it was claimed that both of Cooke’s confessions were merely an attempt to prolong his own trial.

Cooke pleaded not guilty on the grounds of insanity, with his attorneys claiming that he had schizophrenia. With no clear motive for his crimes, all that Cooke could offer up as an explanation for his actions was that he wanted to hurt people.

His defense was quickly dismissed when the director of the state mental health services testified that Cooke was completely sane. The state wouldn’t allow an independent psychiatrist to examine Cooke for a second opinion.

Subsequently, Cooke was convicted of wilful murder on Nov. 28, 1963, after a three-day trial. He was sentenced to death by hanging. Despite having grounds to appeal his conviction, he ordered his lawyers not to move forward with it, telling them that he’d killed and deserved to pay for the crimes he’d committed. Still, Cooke had one last thing he needed to clear up before he was put to death.

Mere minutes before Eric Edgar Cooke was executed, in October 1964, he swore on the Bible that he had been the real killer of Jillian Brewer and Rosemary Anderson. While these claims were brushed off as lies at the time, years later, both Darryl Beamish and John Button would have their convictions quashed — but they’d both already served their sentences by this time.

A single, unidentified woman reportedly protested outside the prison the morning he was put to death. Cooke was the last person in Western Australia to be hanged.

After learning about the life of Eric Edgar Cooke, read about the Michigan man who was exonerated after 37 years in prison for arson and murder he didn’t commit. Then, learn about the crimes of Matias Reyes — the serial rapist whose confession exonerated the Central Park Five.