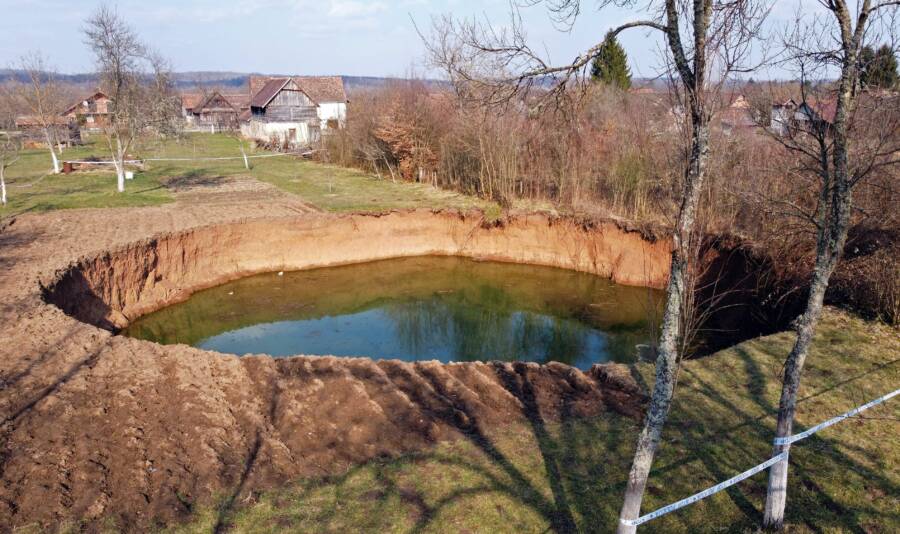 It was six days after a 6.4-magnitude earthquake hit central Croatia on Dec. 29, 2020 that Nikola Borojević saw his garden destroyed. Rather than waking up to marvel at his potato seedlings, the resident of Mečenčani was met by a 98-foot-wide sinkhole with a 49-foot drop.

And 100 more like it would crop up within months.

“My wife was in the house the whole morning, looking occasionally through the window,” Borojević told the BBC. “Around 2 p.m. she noticed something strange in the garden. We went outside and there was this huge hole in our orchard.”

Geologists have long understood that sinkholes are triggered by landslides or earthquakes, but the sheer amount appearing in Mečenčani and its adjacent village of Borojovići left them in awe. Like the earthquake itself, which killed seven people and injured 26 others — the gaping results continued without warning.

Sinkholes in the village of Mecencani, Croatia.

The region near the capital, Zagreb is pocked with round holes of all sizes, which appeared after December’s 6.4-magnitude quake that killed seven people and caused widespread destruction pic.twitter.com/1ZL4YwOWy7

Many of the initial collapses luckily razed empty rural grounds, according to IFL Science, but the sinkholes just kept coming. With 54 of them scattered across the region by the end of January, this rapidly became a threat to the lives and properties of thousands — with officials strongly considering the evacuation of both villages.

When the earthquake struck the city of Petrinja mere days before New Years’ celebrations, it was the strongest Croatia had experienced in nearly half a century. The natural disaster that had killed and injured dozens had also destroyed thousands of homes, while its tremors were felt in both Bosnia and Serbia.

While the worst devastation may be over, Croatians now impacted by the unexpected appearance of sinkholes are anything but relieved. Many residents have seen these surface depressions crop up mere feet from their homes, while several have seen the ground beneath their houses fall out beneath their feet.

“We feel very uncomfortable,” said Mečenčani resident Stojan Kresojevic. “The sinkholes are around us, the uncertainty is killing us. We don’t know if we will be forced to leave. These holes are dangerous as they open up suddenly with water spurting out.”

With 100 sinkholes spread across 3.8 square miles and new ones opening every week, things are nearly becoming untenable. One almost swallowed a local farmer and the tractor he was operating whole, for instance. Fortunately, experts around the world are now on the ground looking for solutions. 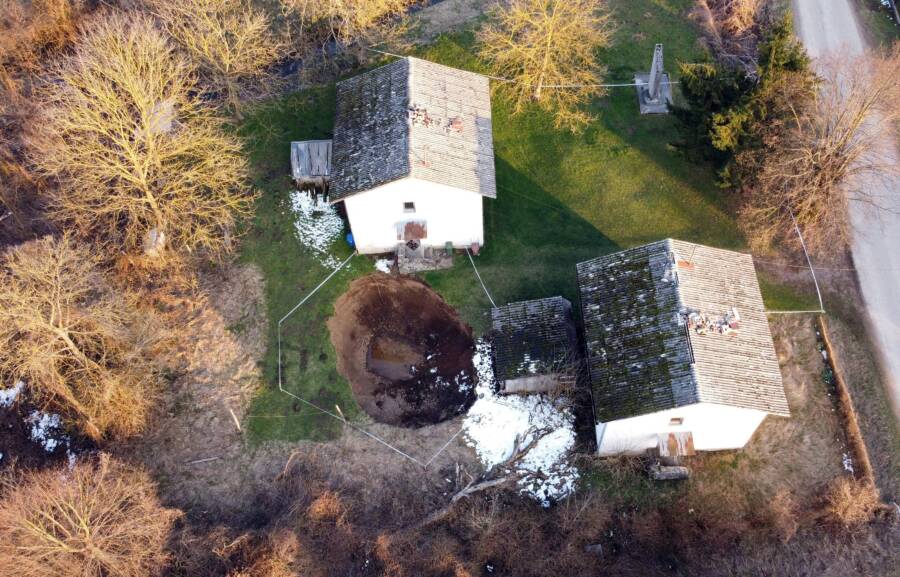 While questions abound, certain things are rather well established. What we do know is that Croatia is a very seismic area, with the Adriatic plate and Eurasian plate slamming into each other causing powerful tectonic shifts. As a result, there have been nine earthquakes with magnitudes over 6 since the early 1900s.

Furthermore, there are thousands of limestone caves along Croatia’s coast comprising what is called the “Dinaric karst.” Dozens of them reach inland, with three deeper than 3,261 feet. They’re highly precarious, drained by acidic water, and slowly eroding the limestone — with earthquakes capable of making their ceilings collapse.

“Even without earthquakes, the ground above such cavities would collapse and depressions would form, as has occasionally happened in the past, but earthquakes have accelerated and intensified these processes,” according to the Croatian Geological Institute (CGI).

“While Dinaric karst is mostly from the Cretaceous and Jurassic period, the karst that we find here is younger and even more porous and hollow,” said CGI hydrogeologist Josip Terzić. “It is limited to a few small zones around here and close to the city of Zagreb.” 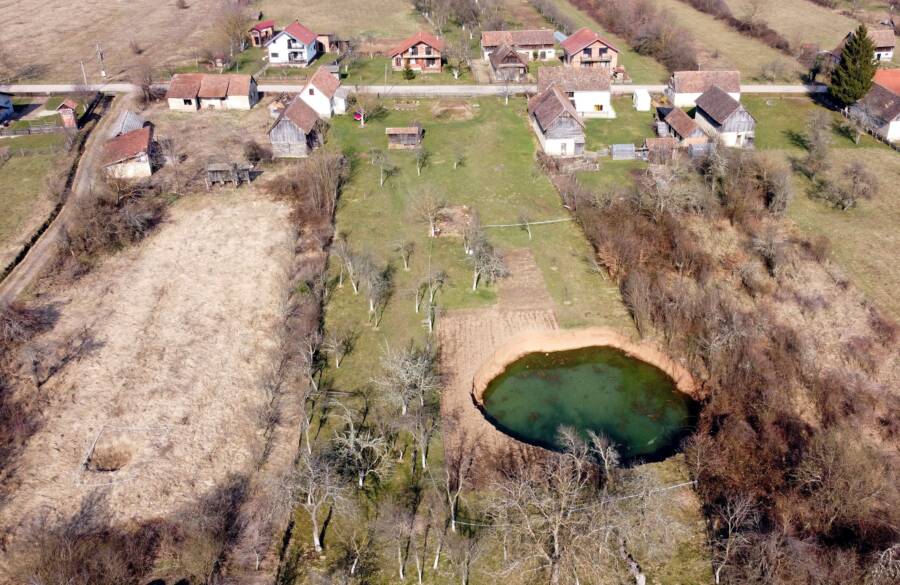 AFP/Getty ImagesWith earthquake tremors impacting the structural integrity of Croatia’s cavernous limestone areas and subterranean waters, these sinkholes were a matter of time.

Since part of Croatia sits atop the Pannonian basin, an enormous underground lake that formed the modern-day lowlands, Zagreb University geophysicist Bruno Tromljenović believes the sinkholes weren’t caused by collapsed caves — but by the earthquake rerouting subterranean waters to shoot upwards.

Both villages in question have been situated atop these lowlands, with enormous amounts of sand, gravel, and silt sitting atop the porous limestone rocks. Ultimately, it certainly appears as though the earthquake was the primary cause of this fiasco, whether by tremors merely collapsing the caves or rerouting waters.

“It is obvious that earthquakes accelerated some already ongoing processes,” said Terzić. “The earthquakes caused massive dynamic stress to these lands and locations that were already in borderline balance suddenly collapsed.”

As it stands, scientists are gathering further data and combing through the region’s historical record to gather a more detailed view into the connection of earthquakes and sinkholes. Meanwhile, Borojević is looking at an estimated bill of $237,130 to fill his gigantic sinkhole — which has become a tourist attraction.

“I could turn it into a fishpond,” he joked.

After reading about 100 sinkholes appearing in Croatia following an earthquake, take a look at the sinkhole that opened up in front of Rome’s Pantheon. Then, check out six of Earth’s most fascinating sinkholes.