The ancient paving was laid around the time of the Pantheon's original construction between 27 and 25 B.C. 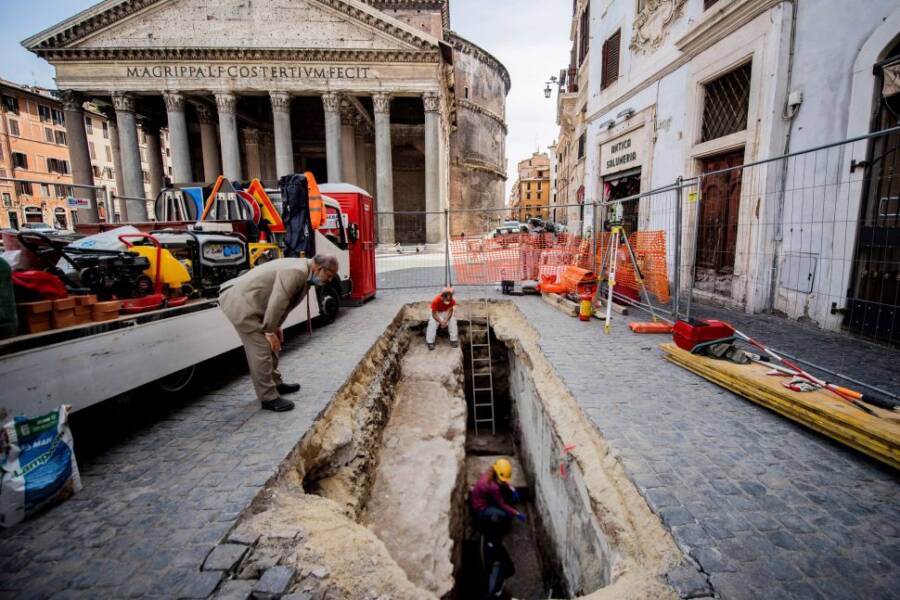 Alessandro Serrano/AGF/Universal Images Group via Getty ImagesConstruction underway following the emergence of a sinkhole near the popular Pantheon of Rome.

A sinkhole that opened up in front of the ancient Pantheon in Rome has revealed a surprise: original Roman paving installed 2,000 years ago when the historic structure was first built.

As Live Science reports, the sinkhole measures 10 feet wide and over 8 feet deep. Inside, archaeologists found seven ancient slabs made of travertine, a type of sedimentary rock.

According to Daniela Porro, Rome’s special superintendent, the stones were designed by Marcus Agrippa, a friend of Emperor Augustus. The original Pantheon was built in the Piazza della Rotonda in the south side of the city between 27 and 25 B.C.

The structure — suspected to be a former temple during the age of ancient Rome — was improved and rebuilt over the years since it was first erected. One of its first makeovers came sometime between 113 and 125 A.D. during the rule of Emperor Hadrian, when the structure that now stands was built.

Later, the area of the Pantheon was modified again during the reigns of emperors Septimius Severus and Caracalla in the early 3rd century. 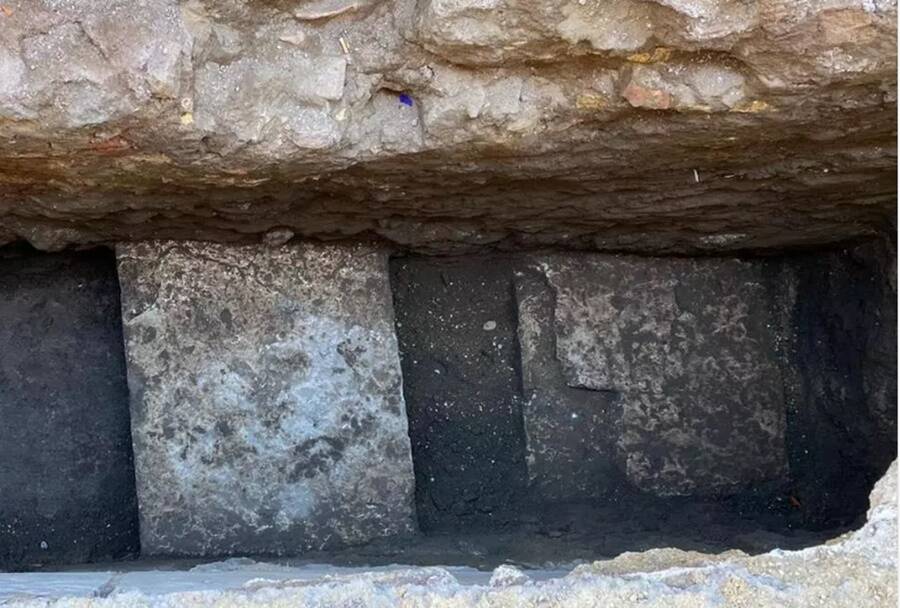 Wanted in RomeThe piazza’s original pavings dating back to 2,000 years ago were found inside the sinkhole.

Now, parts of the piazza’s original design have resurfaced 2,000 years after the Romans first laid the original stones in the city square. Fortunately, nobody was injured by the gaping sinkhole. The piazza, usually a hotspot crowded by throngs of tourists, was empty due to the city-wide lockdown in Rome during the coronavirus pandemic.

About 40 of the travertine marble cobblestones, called sampietrini, gave way when the sinkhole suddenly appeared on the Piazza della Rotonda in late April 2020. Although there were no injuries resulting from the incident, local media reports suggest that the appearance of a sinkhole in front of the Pantheon is an indicator of a larger phenomenon across the city.

European news outlet The Local cited an incident a few months earlier in January 2020 when an apartment building had to be evacuated after the pavement caved in on a road near Rome’s famed Colosseum.

According to the Italian Institute for Environmental Protection and Research (ISPRA), incidents of sinkholes opening up in the streets have become more frequent across the capital in recent years.

There were roughly 275 sinkhole incidents recorded over the last in Rome. The city also recorded an average of 30 sinkholes or similar collapses per year, an annual figure that has tripled since 2008.

“The most sensitive area is eastern Rome, where materials were quarried in ancient times,” said geologist Stefania Nisio, who is working on a project of mapping out the city’s street collapses. “The main cause of a sinkhole in the city is the presence of an underground cavity.”

The worst of these sinkhole incidents was a massive crater which swallowed several passing cars and triggered multiple apartment building evacuations in 2018.

While Rome’s facade above ground is peppered with historical monuments that date back millennia, the city’s underground is filled with large cavities from construction that have been forgotten and paved over through the course of its history.

“We have many examples of this,” Nisio continued, “especially in Lazio, not only in Rome but also in Viterbo and Rieti.”

These forgotten underground cavities combined with Rome’s soft sandy ground — subject to erosion caused by rainwater and vehicle vibrations — have made its streets vulnerable to collapse.

But this is not the first time the original flooring underneath the Piazza della Rotonda has been exposed in modern times. The Roman paving was actually unearthed first during construction work in the 1990s. But it was covered up again after the discovery was documented by archaeologists.

To combat its growing sinkhole problem — which could lead to disastrous effects on Rome’s historic structures if left unaddressed — the city announced a multi-million-euro plan to fix the streets in 2018. Unfortunately, the progress of these improvement efforts has been slow.

Until then, we may see more of the city’s historical treasures revealed through such accidents.

Now that you’ve read about a sinkhole exposing the Pantheon’s original paving, read how archaeologists found 1,700-year-old ancient Roman eggs — then accidentally cracked them open — and why ancient Romans drew penises on everything.