The True Story Of Gloria Steinem, From The CIA To ‘The World’s Most Famous Feminist’

Before Gloria Steinem was the face of second-wave feminism, she was an anti-communist operative for the CIA and went undercover with Playboy to expose their misogynistic practices.

Gloria Steinem is a journalist and activist who rose to prominence as the stylish frontwoman of the women’s liberation movement in 1970s America.

As she turns 86 in 2020, the soft-spoken orator remains one of the most recognized feminist leaders today. Here’s how she became the face of second-wave feminism.

Gloria Steinem was born on March 25, 1934, in Toledo, Ohio, as the youngest of two daughters. Her mother, Ruth Steinem, was a journalist and her father, Leo Steinem, was an entrepreneur who was never quite able to establish a steady business to support his family.

One of her father’s more successful endeavors, however, was a summer resort that he and his wife ran at Clark Lake in Michigan. Steinem remembered growing up there as “a great time of running wild, catching turtles and minnows and setting them free again…wearing a bathing suit all day long and sleeping in a little office behind the dance hall…” 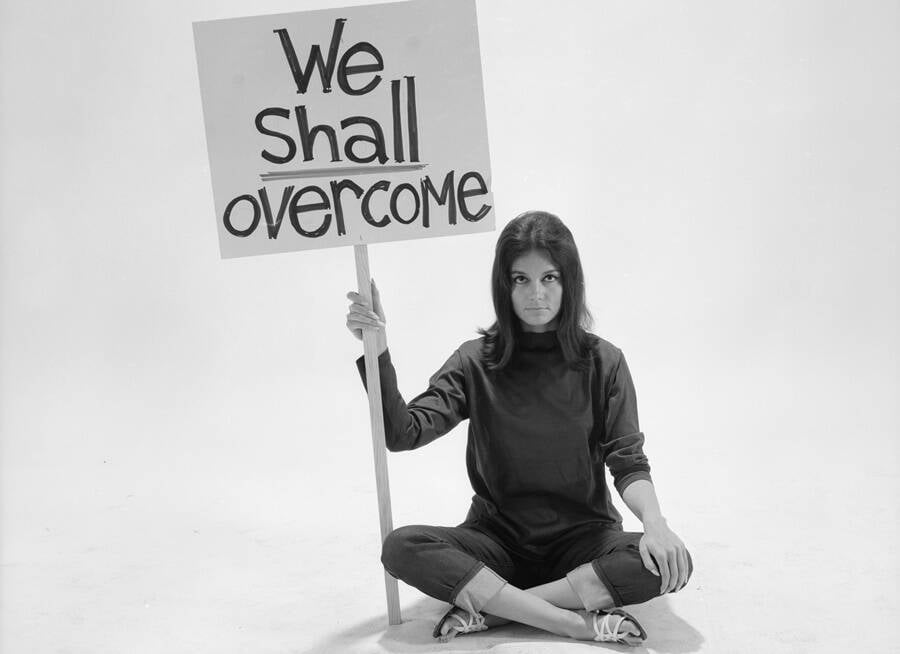 Yale Joel/The LIFE Picture Collection via Getty ImagesSteinem would follow in her mother’s footsteps to become a journalist.

Still, Steinem’s upbringing was colored by her mother’s financial anxieties and her mother consequently suffered a nervous breakdown. Steinem’s parents then divorced when she was 10 and her father moved to California, leaving young Steinem and her sister, Susanne, to take care of their troubled mother.

But Steinem never faulted her father for his decisions. In fact, his lifestyle in part influenced her ideas on gender roles and women’s rights.

“Against all he had been taught a man’s life should be, against all convention for raising children and especially little girls, he loved and honored me as a unique person,” she wrote in a 1990 essay. “And that let me know that he and I — and men and women — are not opposites at all.”

As a teenager, Steinem moved to Washington, D.C., with her older sister where she finished her senior year at Western High School. She was Vice President of her class. 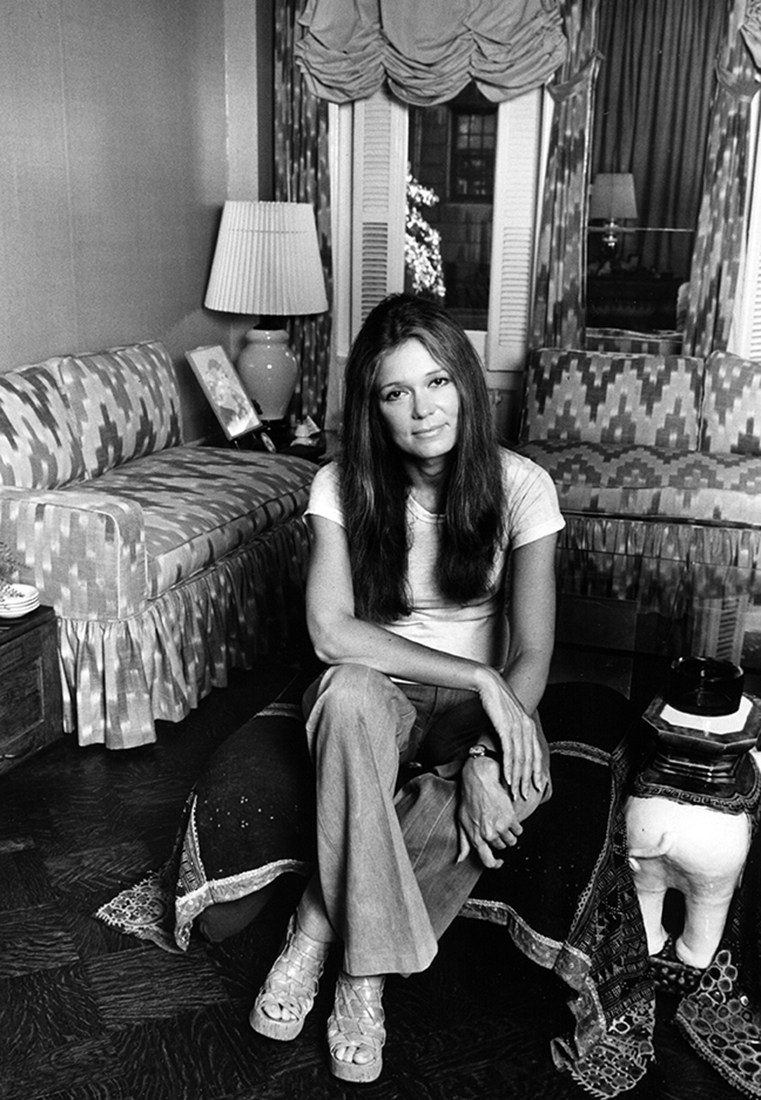 Wikimedia Commons“The truth will set you free. But first, it will piss you off.”

Steinem went on to attend Smith College, a historic all-women’s liberal arts school founded on progressive ideas. But according to Steinem, education at Smith in the 1950s was very different.

“I had gone through this entire college without ever reading a feminist book, without learning that women weren’t just given the vote as a gift, without learning about the links between the suffragists’ and abolitionists’ movements…I was really angry at Smith [College] for not preparing us for the world,” Steinem confided years later as a member of the school’s board.

Steinem added that the working world “was very conservative. People were trying to get women out of the paid labor force and into the suburbs.” After men returned from World War II, they attempted to remove the women who had taken their jobs in the meantime, unsympathetic to their newfound independence. And it was into this workforce that Steinem entered.

Life With The CIA And Undercover With Playboy 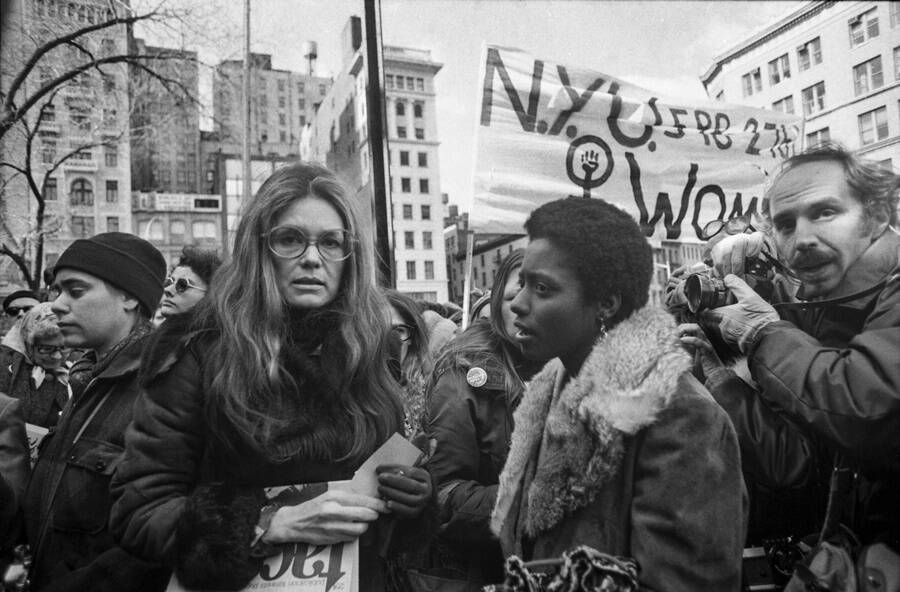 Bettmann Archive/Getty ImagesGloria Steinem and Lt. Gov. Maryann Krupsak of New York along with other activists at the International Women’s Day March. Some 2,000 women showed up in solidarity.

Steinem’s activism was reportedly largely influenced by her experience in India during the late 1950s.

Steinem spent two years learning about India’s land reforms movement as a Chester Bowles Asian Fellow and traveled to different parts of the country where she cultivated deep friendships with young activists who were devout supporters of Mahatma Gandhi.

She would later apply what she learned from Gandhi’s supporters about social organization to her own movement for women’s rights.

“I would have kept on believing that change begins at the top,” Steinem said of her experience. “Instead, I got to see for myself, that it is work done by activists, by people on the ground that prompts real change.”

Upon her return from India, Steinem worked for the Independence Research Service, a foundation backed by the CIA that sent hundreds of American students abroad to disrupt World Youth Festivals, which were propaganda events for the Soviet Union.

Steinem was later criticized for her involvement in the organization, but she later admitted “if I had a choice I would do it again.” 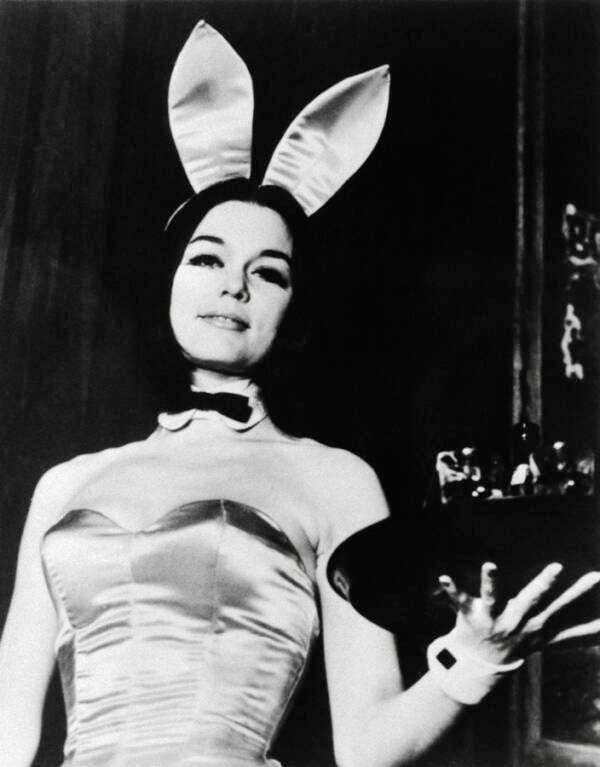 Getty ImagesGloria Steinem undercover as a Playboy Bunny in order to investigate the company’s labor practices.

Steinem then followed in her mother’s footsteps and became a journalist. Her editorial break came in 1962 when she wrote about the newly-released contraceptive pill for Esquire magazine. She continued to make a name for herself as a journalist who focused on women’s issues and politics in New York City.

But it was still pre-women’s liberation and women writers weren’t being taken all that seriously. After her splashy feature story on the birth control pill, Steinem went undercover as a Playboy Bunny for Show magazine.

“I learned what it’s like to be hung on a meat hook…the costume was so tight, it would have given a man a cleavage.”

The resulting exposé, titled “A Bunny’s Tale”, revealed the harassment and misogyny that the club’s workers were subjected to and reinforced her credibility as a serious journalist.

She wrote for a number of big publications such as The New York Times and Cosmopolitan, and landed a recurring column at the then-new New York Magazine in 1968. 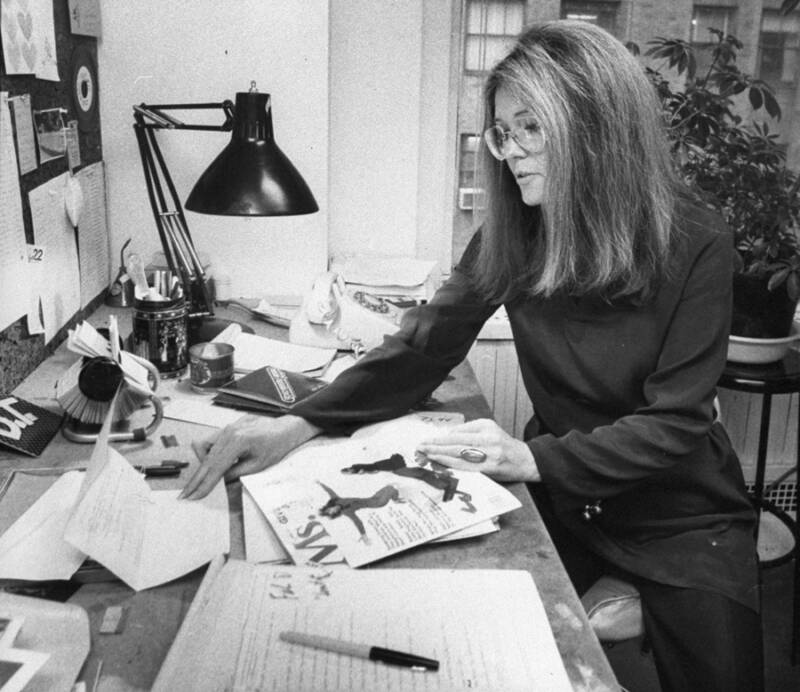 Her Fight For The Equal Rights Amendment 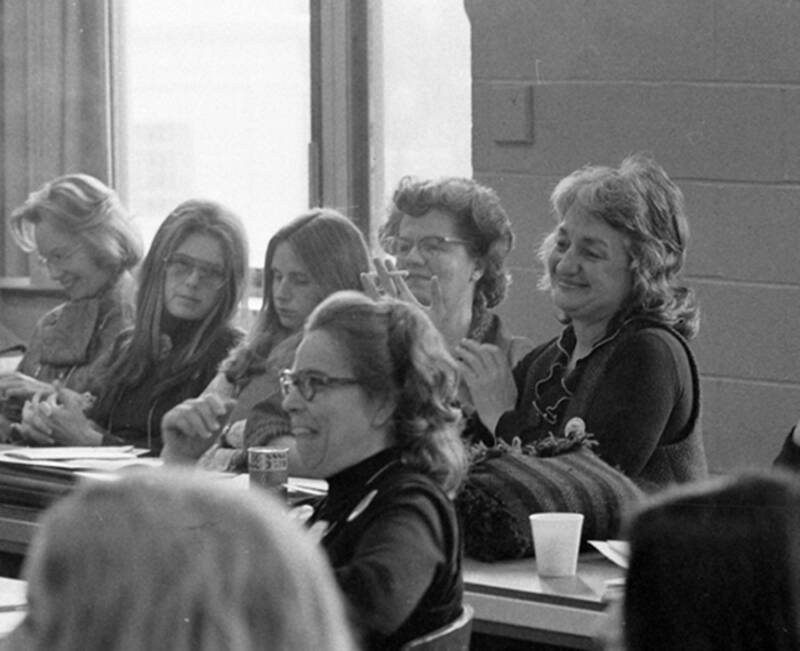 In 1972, Gloria Steinem founded the groundbreaking Ms. magazine alongside prominent writers like Letty Cottin Pogrebin and Dorothy Pitman Hughes. The magazine made waves as one of the first politically-inclined publications geared specifically toward women.

But critics were quick to write off the magazine. Columnist James J. Kilpatrick called Ms. a “C-sharp on an un-tuned piano” of “petulance, of bitchiness, or nervous fingernails screeching across a blackboard.” Network news anchor Harry Reasoner declared, “I’ll give it six months before they run out of things to say.”

Yet, the magazine generated an impressive 26,000 subscription orders and received over 20,000 reader letters in its first weeks. It’s still in operation today. 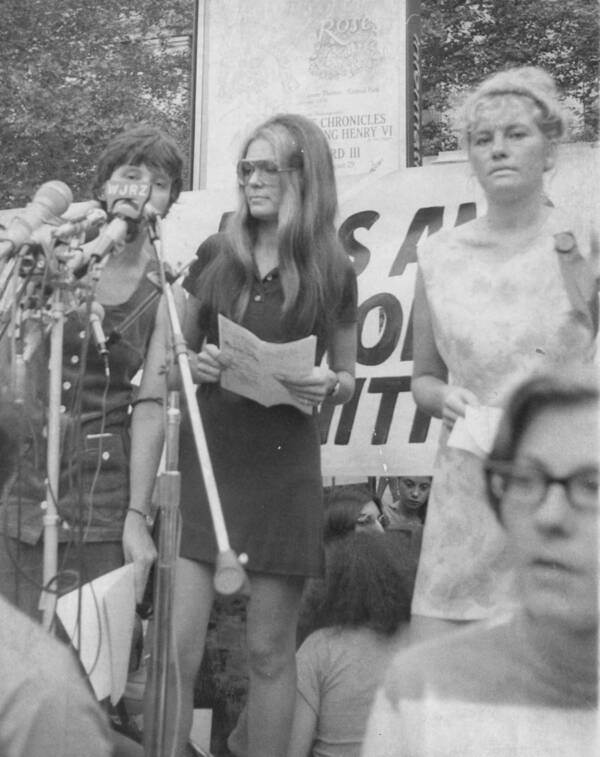 Steinem crusaded the issue of reproductive rights in part for personal reasons. At 22, Steinem wanted to get an abortion and found a doctor in London willing to perform the procedure. She went on to speak candidly about this experience in order to impart the importance of the procedure to the public.

“I think the person who said: ‘Honey, if men could get pregnant, abortion would be a sacrament’ was right,” she told The Guardian. “Speaking for myself, I knew it was the first time I had taken responsibility for my own life. I wasn’t going to let things happen to me. I was going to direct my life, and therefore it felt positive.”

Steinem also co-founded the National Women’s Political Caucus (NWPC) which launched a grassroots campaign for the political rights of women. The NWPC focused primarily on the Equal Rights Amendment (ERA) which would legally ban gender-based discrimination by codifying women’s rights into the Constitution. 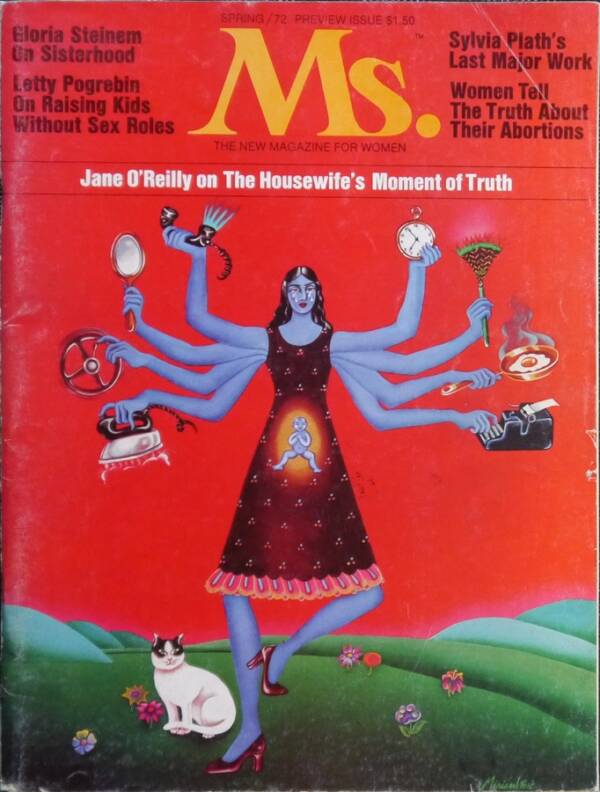 Steinem testified during a Congressional hearing in support of the amendment:

“I had deep misgivings about discussing this topic when National Guardsmen are occupying our campuses…and America is enlarging an already inhuman and unjustifiable war. But it seems to me that much of the trouble in this country has to do with the ‘masculine mystique’…the myth that masculinity somehow depends on the subjugation of other people.”

Despite wide support for the ERA, an opposition led by right-wing anti-feminist Phyllis Schlafly killed the amendment’s momentum. In the end, only 35 states voted to adopt the amendment — three states short of the total needed for it to become law.

Beef With Betty Friedan And Her Portrayal In Mrs. America

Gloria Steinem talks about the women’s liberation movement in a 1970 interview.

Despite the huge strides that the women’s liberation movement achieved in galvanizing social attitudes toward women, it was also plagued by internal conflicts. The press zeroed in especially on the feud between Steinem and Betty Friedan, the author of the famous The Feminine Mystique.

Their scuffles often played out publicly. In a 1972 article for McCall’s, Friedan called Steinem a “female chauvinist” for her radical approaches to advancing women’s liberation. She also deemed Steinem one of the “disruptors of the women’s movement” because she embraced lesbian activists.

Steinem and Friedan were ideological opposites — or “generals in opposing camps” as one publication put it. The media lapped up the rivalry, often insinuating that Friedan was jealous of Steinem for eclipsing her popularity. 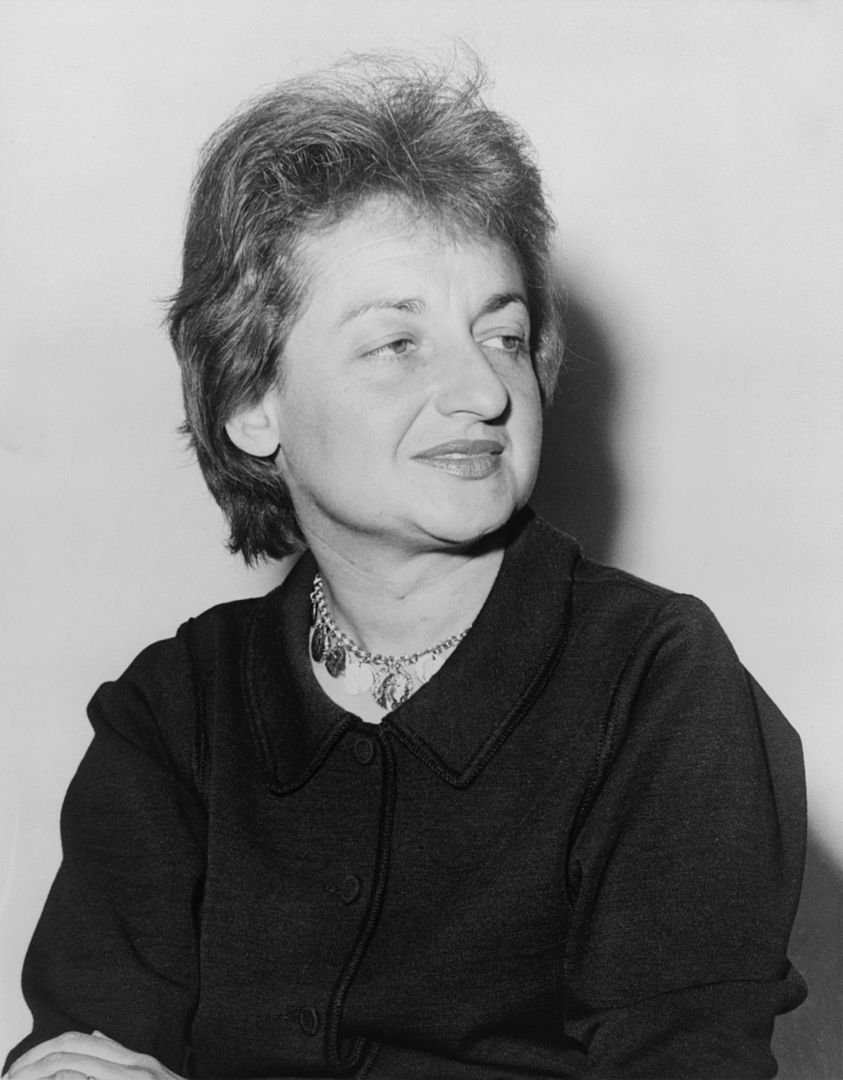 Wikimedia CommonsBetty Friedan, pictured here, wrote The Feminine Mystique which was widely credited with sparking second-wave feminism — but Steinem became the face of this movement.

A bit of their feud and Steinem’s campaign to ratify the ERA are portrayed in the 2020 Hulu series, Mrs. America. Actress Rose Byrne, who played the world-famous feminist, said that she was taken aback by the mounting scrutiny against Steinem.

The show mostly kept true to the events of the battle for the ratification of the ERA, though dramatizations were naturally added. Some of the most poignant scenes, however, were taken from real life. 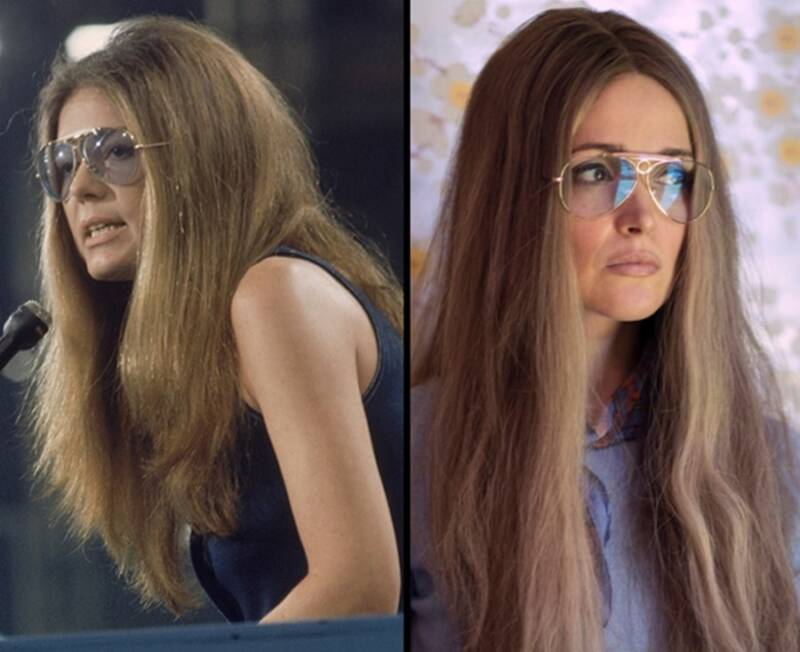 For instance, in one scene dramatizing Steinem’s abortion, the doctor agrees to perform the operation on two conditions: one, that she not tell anyone his name and, two, that she promise to “do what you want to do with your life.” As Steinem purports in her memoir, My Life On The Road, the doctor actually did utter those words — and she consequently dedicated the book to him.

Gloria Steinem remains the most recognizable figure of America’s second-wave feminist movement and she has received countless honors for her tireless advocacy. These days, 86-year-old Steinem continues to make appearances and to lecture around the world. She will be the subject of a 2020 biopic called The Glorias.

After reading the story behind Gloria Steinem, read the unbelievable story of Olympe de Gouges, the radical French feminist who was guillotined by revolutionists. Then, remember the women’s suffrage movement in 50 powerful photos.