Meet Jill Ruckelshaus, The Progressive Republican Who Opposed Her Party To Fight For Women’s Rights

As a founding member of the National Women's Political Caucus, the fearless Jill Ruckelshaus joined Gloria Steinem and other feminists to fight for the ratification of the Equal Rights Amendment.

Jill Ruckelshaus rose to prominence in 1970s American politics as a socially-progressive Republican in a time when conservativism was gaining momentum. Her support for the women’s rights movement earned her the nickname “Gloria Steinem of the Republican Party,” which worked as either a compliment or an insult, depending on the party member who uttered it.

Her consistent views in regards to civil and women’s rights earned her the ire of more right-wing GOP members, but she did not let the opposition stand in her way. Her fight to ratify the Equal Rights Amendment and her stunning moral integrity were portrayed in the 2020 Hulu docudrama Mrs. America. Here is her true story.

Before she ruffled the feathers of her own party, Jill Ruckelshaus was born Jill Elizabeth Strickland in 1937 to an Episcopalian family in Indianapolis, Indiana. After graduating from Indiana University, Ruckelshaus went on to obtain a master’s degree in English literature from Harvard.

After a stint teaching abroad in Switzerland, she returned to Indiana in 1962 and met her husband, William Ruckelshaus, at a dinner party set up by Ruckelshaus’s aunt. He was Deputy Attorney General of Indiana at the time — he was also a widower with twin toddlers. They were introduced and the two wed five months later.

“I got the willies at the idea of being married — I had a career without marriage planned,” she admitted. But the couple turned out to be perfect for each other, advocating for progressive ideals in a more conservative government.

William Ruckelshaus was known for his opposition to DDT and his call to institute health-based standards for air pollutants and car emissions. Together they were known as the “clean” couple of the Washington swamp following Richard Nixon’s 1973 Watergate Scandal.

Indeed, their stance on Republicanism was such that Jill Ruckelshaus referred to herself as a “Ruckelshaus Republican.” 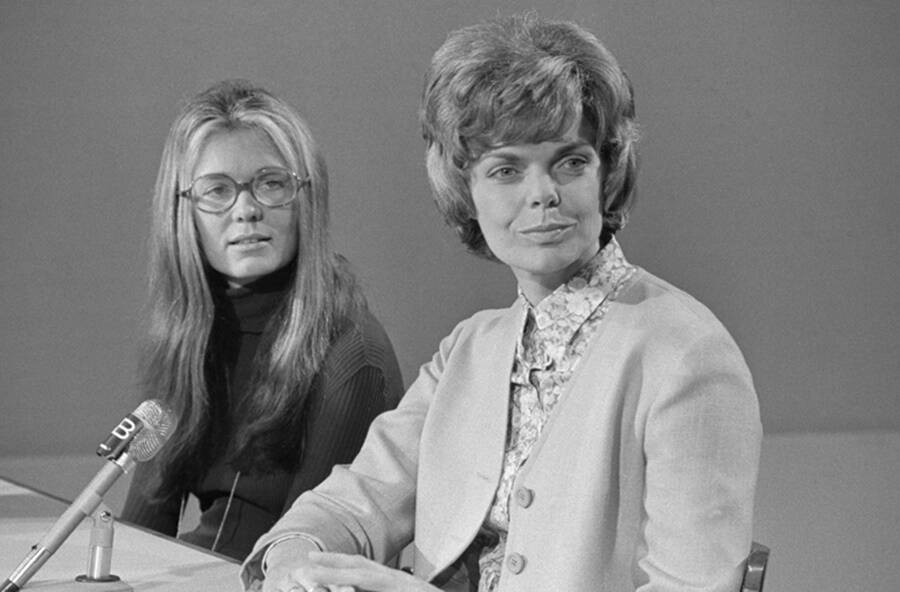 Jill Ruckelshaus was briefly a stay-at-home wife as the family expanded to five children. She had to leave some ambitions, like her desire to join the Peace Corps, behind. Instead, Ruckelshaus channeled her energy into becoming a perfect homemaker. She reportedly had “this obsession to be the best housecleaner, to have the best parties, and to have the cleanest, best-dressed children.”

In 1969, the family relocated to Washington, D.C. when William Ruckelshaus was hired as the U.S. Assistant Attorney General for the Civil Division of the U.S. Department of Justice under then-President Nixon’s new administration. Meanwhile, Ruckelshaus grew too restless.

“I had a lovely family,” she recalled. “But I was terribly unhappy. I didn’t identify what was wrong with my feelings until I began meeting women who were doing things and were using their minds.”

Ruckelshaus’ Fight For The ERA

The NWPC was the “only national organization dedicated exclusively to increasing women’s participation in all areas of political and public life” and most notably campaigned for the ratification of the Equal Rights Amendment (ERA), an amendment to the constitution that would afford women more legal, social, and political rights. The ERA had seven years to acquire the approval of 38 states in order to be written into the constitution.

Ruckelshaus was frequently one of the only conservatives among liberal women and was notably pro-choice. Other conservative women, like Phyllis Schlafly, opposed Ruckelshaus’ positions and actively campaigned against the Equal Rights Amendment. 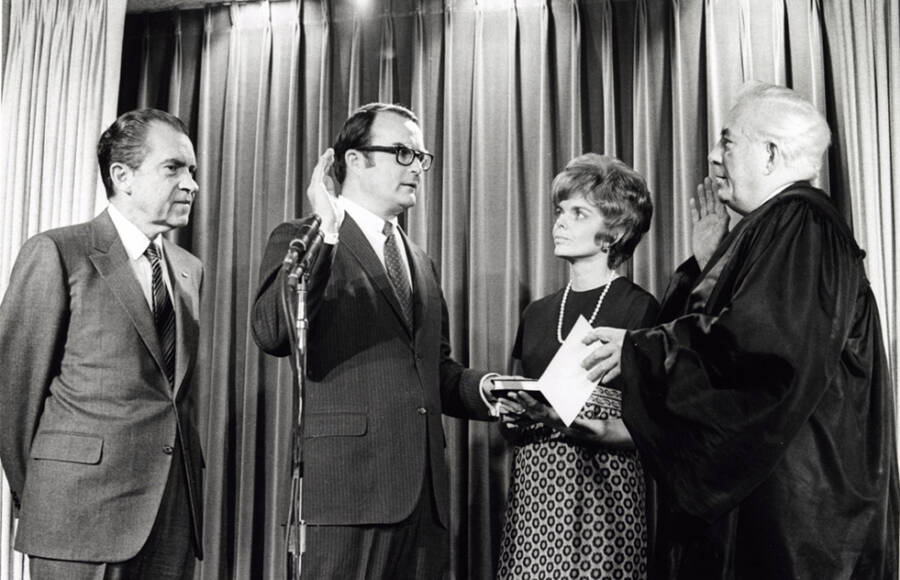 Wikimedia CommonsThe Ruckelshaus’ at William’s swearing-in as the head of the new EPA.

In 1972, Jill Ruckelshaus was made the White House special assistant on women’s rights but stepped down in 1973. At the same time, her husband left his posting as the head of the new EPA due to corruption in Nixon’s cabinet.

In a 1975 speech before the National Press Club, Ruckelshaus took the press to task for its sexist coverage of female politicians and encouraged her party to appoint a woman as the chair of the upcoming Republican convention.

She specifically called out U.S. Representative Morris Udall, a Democrat from Arizona, who stated on his personal envelopes that the public wanted “true leadership from our public men and institutions.” Ruckelshaus quipped: “I suspect that the printing on that envelope will soon change.”

That same year, she was appointed to the head of a presidential commission on women’s rights under President Gerald Ford, who assumed the presidency following Nixon’s resignation. The posting was a clear sign of the new administration’s support for the ERA and elevated Ruckelshaus’ status in politics.

In 1977, Ruckelshaus was a key figure in securing $5 million from Congress in order to hold a National Women’s Conference for the first time in Houston, Texas.

Meanwhile, there was a widely-held belief that the ERA was going to pass, but it wound up being just short of approval when it reached its ratification deadline in 1979. This was because of the unexpected national campaign against the amendment mobilized by fellow Republican Phyllis Schlafly. 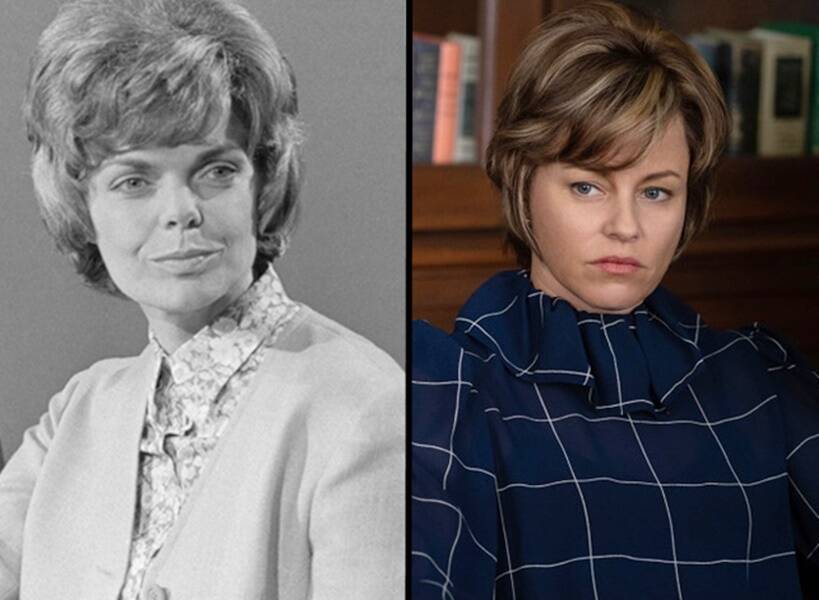 The failure of the ERA did not spell the end to Ruckelshaus’ political career.

In 1980, she was appointed to the U.S. Civil Rights Commission by former Democratic President Jimmy Carter. This was evidence of her growing political appeal on both sides of the House floor. Moderate Republicans appreciated her vigor and Democrats resonated with her ideals.

She became the third head of the United Nations Conference on International Women’s Year. From 1980 to 1983, she served as a commissioner for the United States Commission on Civil Rights.

“She’s hard-working and practical and always does her homework,” said Blandina Cardenas Ramirez, a Democrat who served on the Civil Rights Commission. “I really can’t say enough glowing things about her. She’s a liberal woman, but she has a practical understanding about what government can be.”

In the 2020 Hulu series Mrs. America, Jill Ruckelshaus is portrayed by actress Elizabeth Banks. Banks spoke about her own views on feminism while promoting the show at the Television Critics Association in January 2020: “I never bought into ‘feminist’ being a bad word…I just believe men and women should have equality of opportunity…Everything else that has gone into the demonization of the word are special interests who don’t want women to succeed.”

Ruckelshaus likely holds a similar sentiment. She remains a progressive advocate for women’s rights to this day.

Now that you’ve learned about Jill Ruckelshaus, meet Martha Mitchell, the woman nobody believed about Watergate. Then, read up on Mary Astell, the so-called mother of all feminists.