The USS Nevada was found three miles below the surface of the Pacific where it partook in World War II. This is the first time anyone's seen it since. 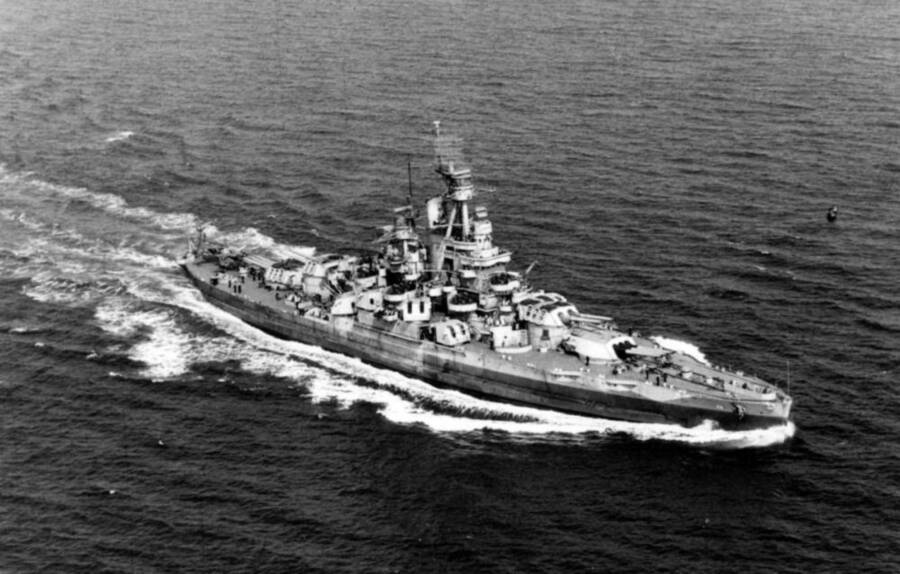 U.S. Navy/Naval History and Heritage CommandThe USS Nevada off the Atlantic coast of the U.S. on Sept. 17, 1944.

The wreck of the U.S. Navy warship Nevada has been discovered in the Pacific Ocean after nearly 72 years underwater. According to Fox News, the World War II battleship was found 65 nautical miles southwest of Pearl Harbor at a dizzying depth of 15,400 feet.

In a joint venture by private archaeological firm SEARCH and marine robotics company Ocean Infinity, autonomous underwater drones were deployed from the Ocean Infinity’s Pacific Constructor vessel in an effort to capture footage of the wreckage and positively identify it.

According to IFL Science, experts have known roughly where the ship sank, but this is the first time that anyone’s actually seen it.

The rediscovery of this ship is made all the more remarkable considering its storied past. The Nevada survived the attack on Pearl Harbor, battles in the Pacific Theater, and atomic bomb testing in the Marshall Islands. 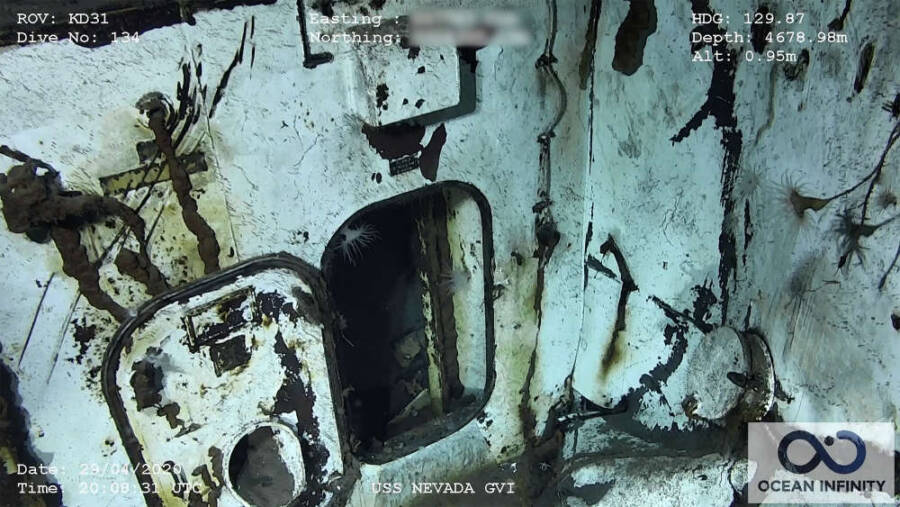 Ocean Infinity/SEARCHAn engraving on the bulkhead above the hatch leading to a shell handling compartment confirmed that this was, indeed, the Nevada.

The Naval History and Heritage Command noted that the Nevada was the only battleship to respond to the Dec. 7, 1941, attack on Pearl Harbor and was consequently extensively damaged by aerial bombs and one torpedo, but it managed to get beached and repaired.

Two years later, the ship took part in the May 1943 Attu landings before being relocated to assist troops crossing the Atlantic. Then, the Nevada took part in the June 1944 invasion of Normandy and in Operation Dragoon in southern France that same year.

Indeed, World War II made thorough use of the battleship, taking it to the skirmishes across the Pacific, including to the invasions of Iwo Jima and Okinawa in 1945, before being seriously damaged by a kamikaze pilot on March 27 and artillery on April 5 of that year. 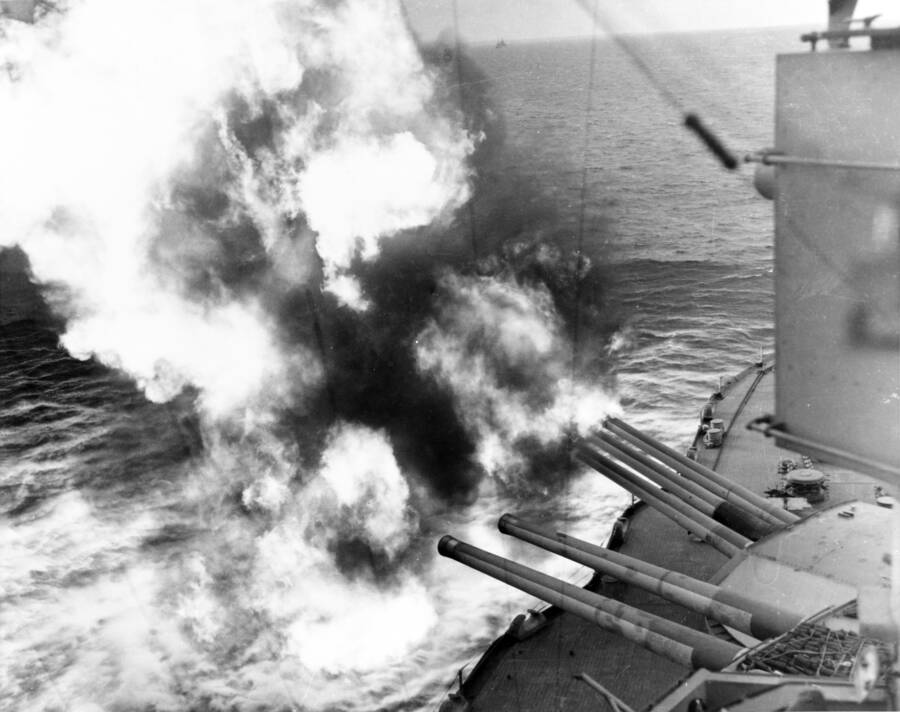 Wikimedia CommonsThe Nevada fires during the landings on Utah Beach during the Allied invasions as a part of D-Day.

When the war finally ended, the Navy used the seasoned vessel as a target ship for the infamous atomic bomb tests in the Bikini Atoll on the Marshall Islands in July 1946. The Nevada was not only damaged but was left too radioactive to be put back into use.

The Nevada was officially decommissioned in August 1946 and purposefully sunk by U.S. torpedos in 1948. It wouldn’t be seen for 72 years — when a team of resourceful experts relocated it.

Ocean Infinity’s Pacific Constructor has been engaged at sea in numerous commercial tasks in the region even before the COVID-19 pandemic put everything on hold. She had surveyed over 100 square miles to find the sunken ship. 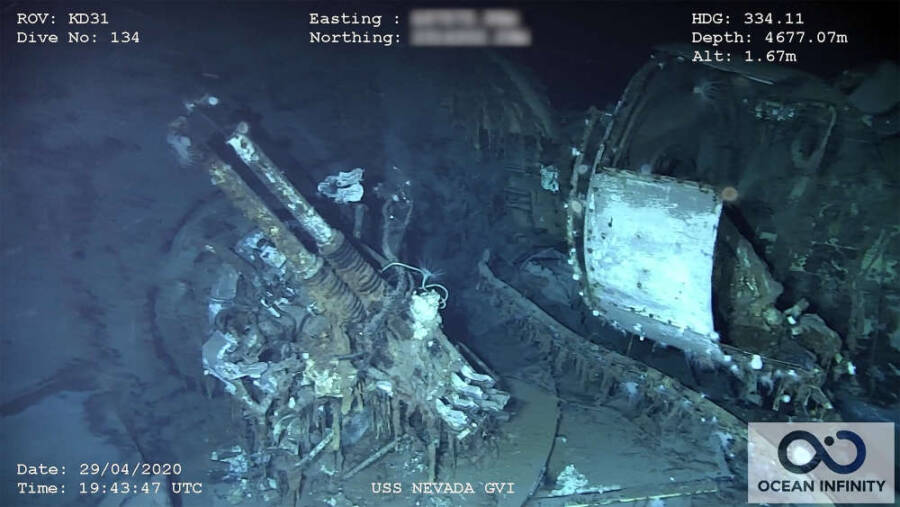 Ocean Infinity/SEARCHThe Nevada‘s 40mm gun has remained in position for 72 years and sits mounted next to a partly fallen Mark 51 “gun director” which crew members used to direct gunfire.

“Nevada is an iconic ship that speaks to American resilience and stubbornness,” said Dr. James Delgado, SEARCH’s senior vice president and lead archaeologist on the project. “Rising from its watery grave after being sunk at Pearl Harbor, it survived torpedoes, bombs, shells, and two atomic blasts.”

Delgado added that rediscovering the ship “reminds us not only of past events but of those who took up the challenge of defending the United States in two global wars. This is why we do ocean exploration — to seek out those powerful connections to the past.” 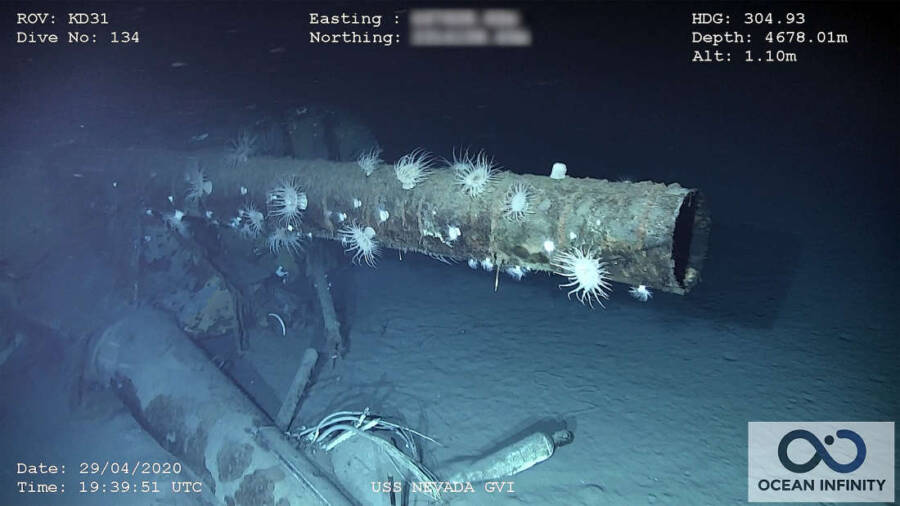 Ocean Infinity/SEARCHThe mast of the Nevada once stood over 100 feet.

For those of us at home, gazing at the geared steam turbines and triple gun turrets collecting marine growth, this discovery is a treat. It transports us back to a time in history where entirely different threats loomed — and were eventually overcome.

After exploring the wreck of the iconic Nevada, explore the horrors of the Pacific Theater in World War II. Then, learn about Hitler’s prized battleship, the Tirpitz, and how it was taken down by tiny submarines.