The Black Swallower shouldn't be judged by its size: it can swallow fish over twice its size in a single bite. 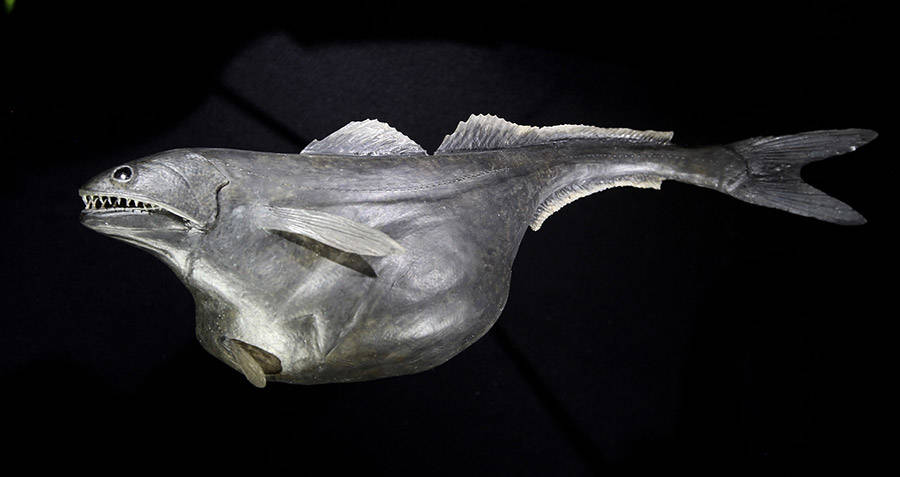 Standing (or rather swimming) at an average of 10cm in length, the Black swallower’s claim to fame: eating fish bigger than itself. Much bigger.

The maximum known length of a Black Swallower, also known as Chiasmodon niger, is a mere 25cm. However, at meal time this fish is known for feeding on prey over twice its length and 10 times its own mass. And it doesn’t save leftovers for later. The Black Swallower is like the Boa Constrictor of fish, as it swallows its prey whole.

Take a moment to picture eating something twice your size in one bite. Makes you feel better about the last time you binge ate.

The fish is most common in North America and they live 10,000 feet below the surface of the ocean. There aren’t many creatures that low down. So it’s really an eat or be eaten kind of situation, size be damned.

The Black Swallower is part of the Chiasmodontidae fish family, which are deep sea, snake-tooth fishes. It is scaleless, has a long head, and is blackish brown color. The Black Swallower has a big jaw and a stomach that expands in order to accommodate its large meal.

And even though it swallows the prey fish whole, its sharp teeth aren’t just for show. The Black Swallower has a set lining each jaw that clamps together, giving it a good grip.

Here’s how the fish is thought to do it: it starts with catching the prey by the tail. It then moves its jaw over the prey until the “food” is fully inside the stomach. The stretched stomach extends, so far down in fact, that the stomach tissue becomes transparent.

Despite its superstar (and disgusting) eating capabilities, the Black Swallowers keep a low profile. They have never been caught on camera. 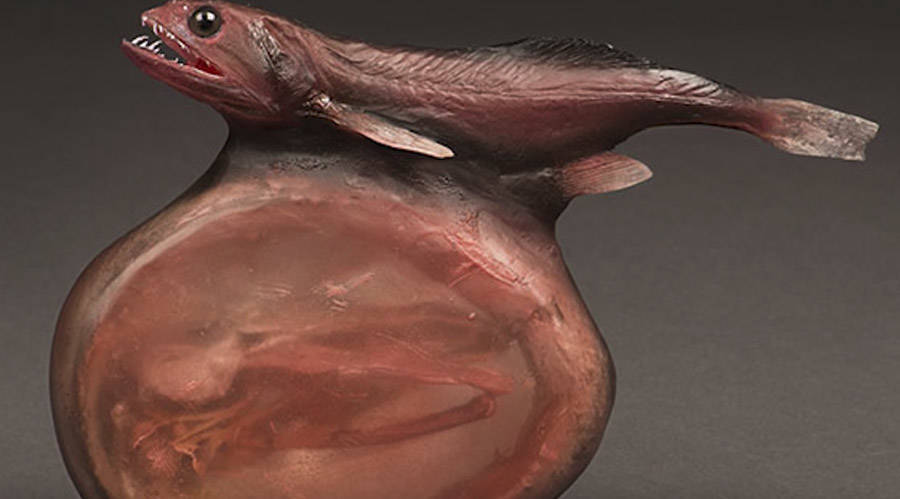 YouTubeA black swallower with food in its stomach.

So how have scientists been able to find them?

To borrow the expression, it comes down to the matter of one’s eyes being bigger than one’s stomach. These fish can get a bit cocky from time to time. Sometimes they swallow fish so big that the eaten fish doesn’t get digested before it starts to decompose.

During the decomposing process of the fish inside the stomach, gas is released which floats the Swallower all the way up to the surface of the ocean.

In 2007, a fisherman off the South Coast of Grand Cayman came across a Black Swallower that was only 7.5 inches in length, yet had swallowed a snakefish that was 3 feet long. Photos of the fish taken by a marine biologist were sent to the Harbor Branch Oceanographic Institute. That’s where they were able to identify it is a Black Swallower.

A classic case of overeating, granted, with more severe consequences.

As impressive as its survival tactic is, one can only imagine the kind of prey a bigger fish with the eating abilities of the Black Swallow would be able to catch.

After reading about this strange salt water creature, take a look at the 15 weirdest freshwater fish ever caught. Then, read about the fish that can give you LSD-like trips