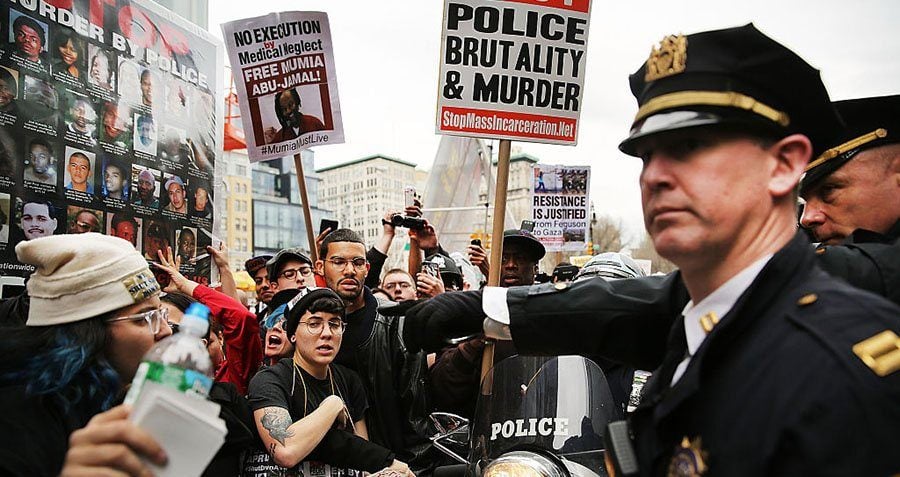 Assaulting a police officer could be considered a hate crime if Staten Island Assemblyman Ron Castorina gets his way.

On Thursday, Castorina and his Republican colleagues announced a “Blue Lives Matter” bill, which he says will “promote peaceful assembly at protests” across the state.

“We want to protect police officers by making the public pause before they throw a bottle or a rock or a punch,” Castorina told Gothamist.

At present, New York State law dictates that hate crime statutes only apply to attacks based on race, sexual orientation, religion, ancestry, gender, age (over 60), and national origin. If passed, Castorina’s bill would make police officers a protected group, meaning that any offense committed against them would be upgraded to a more severe classification.

For instance, assaulting a police officer is currently a Class C felony. If the bill passes, that assault would become a Class B felony. Aggravated assault — where the perpetrator intends to greatly harm the cop — would be elevated to Class A, which is punishable by up to 30 years in prison.

Despite the fact that FBI and Bureau of Justice statistics show that the incidents about which Castorina and his colleagues worry have been falling for decades, Castorina still finds his bill necessary.

“[The bill is] based on this climate in this country right now where police officers are being abused and they’re being disrespected, and we’re seeing they have a target on their back, in Louisiana and in Dallas,” he told the Observer. “You can envision this happening at a protest, where somebody might throw a rock or a bottle or a punch.”

Critics say that individuals already face enough legal blowback for interacting with police officers, and that this bill is unnecessary.

Touching on the differing responses to the December 2014 murders of NYPD officers Rafael Ramos and Jian Liu and the lack of accountability for police murder of unarmed black civilians, Brooklyn Councilmember Jumaane Williams said “with those terrible acts of terror [against police officers], there was accountability. Many of us don’t think the same things happen for black people who are killed. That’s why saying ‘Blue Lives Matter’ is redundant.”

Given the fact that Castorina’s bill will go up against a Democratic-majority legislature, it’s doubtful that his bill will pass. Still, Castorina remains optimistic. “There are many conservative Democrats I’m sure would feel this is a worthwhile cause,” he told the Observer.

If passed, Castorina’s bill will join Louisiana’s own, similar Blue Lives Matter bill, which became law in May.