From Maine to the British Isles, only a few fishermen have ever hauled in a blue lobster, a rare crustacean with an iridescent sapphire hue. 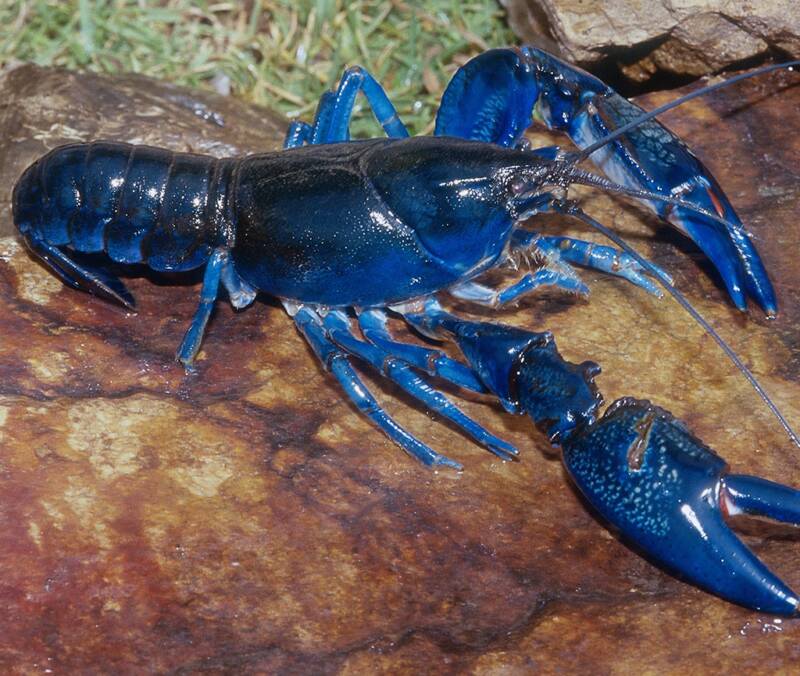 Though there are many unusually colorful specimens living under the sea, there are none quite like the blue lobster. But the chances of coming across one of these startling creatures is close to one in 2 million.

While the blue lobster’s rarity makes it a prized delicacy, many fishermen have been compelled to release them in recent years due to their dwindling population. In July of 2020, the staff at a Red Lobster restaurant in Ohio made headlines when they discovered a blue lobster in their product supply. Locals commended the chain for sending it to a local zoo instead of a dinner table.

Despite their visual appeal, however, it’s the mystery behind the blue lobster’s vibrant colors that draws many to them.

Why Are Blue Lobsters Blue? 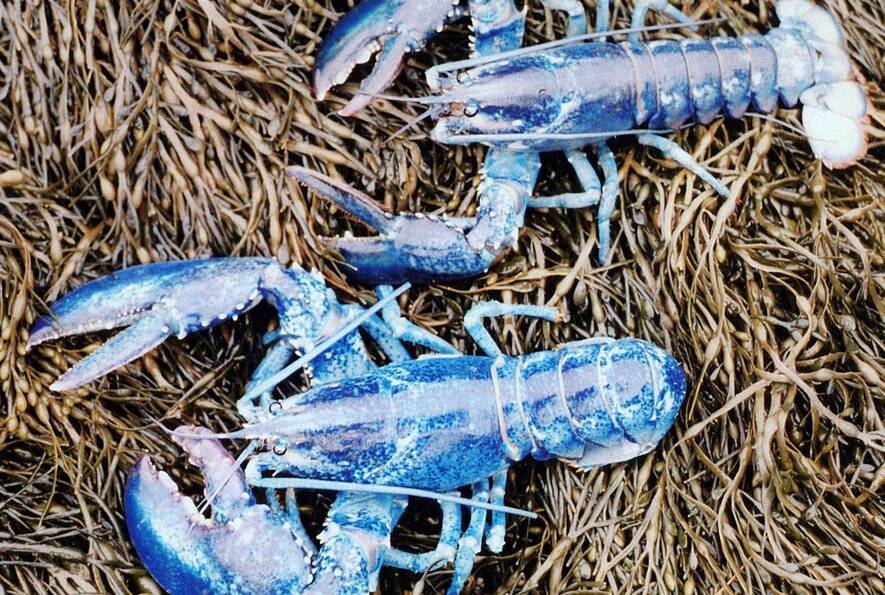 Lobster Institute/University of MaineThe odds of catching a blue lobster is about one in two million chances. Lobsters with other unusual colorings are even rarer.

Their unique shade is the consequence of a genetic abnormality that results in the overproduction of a certain protein. Because they’re extremely rare, experts put the odds of this coloring anomaly at one in two million. However, these stats are merely guesses.

These lobsters are so uncommon that when crews discovered one amid the ill-fated lobsters at a Red Lobster restaurant, workers jumped into action.

“At first it looked like it was fake,” Culinary Manager Anthony Stein told NPR. “It’s definitely something marvelous to look at.”

After company officials got in touch with the Monterey Bay Aquarium, the blue lobster went to live at its new home at the Akron Zoo in Ohio. They named him Clawde in honor of the chain’s mascot.

If you’re lucky enough to catch a glimpse of a one-in-two-million blue lobster in the wild, however, it’ll likely be around the Atlantic coasts of North America and Europe. But these lobsters also live in other parts of the world, like Australia, and even in some freshwater areas.

Meanwhile, the defect that results in blue lobsters also results in other, even rarer colors, too.

According to the Lobster Institute at the University of Maine, the odds of catching a yellow lobster are even steeper at one in 30 million. But there’s a one in 50 million chance of catching a two-toned colored lobster. By comparison, the possibility of finding an albino or “crystal” lobster — as two fishermen in England did in 2011 and another fisherman in Maine did in 2017 — would be one in 100 million.

Inside The Life Of These Rare Sapphire Crustaceans 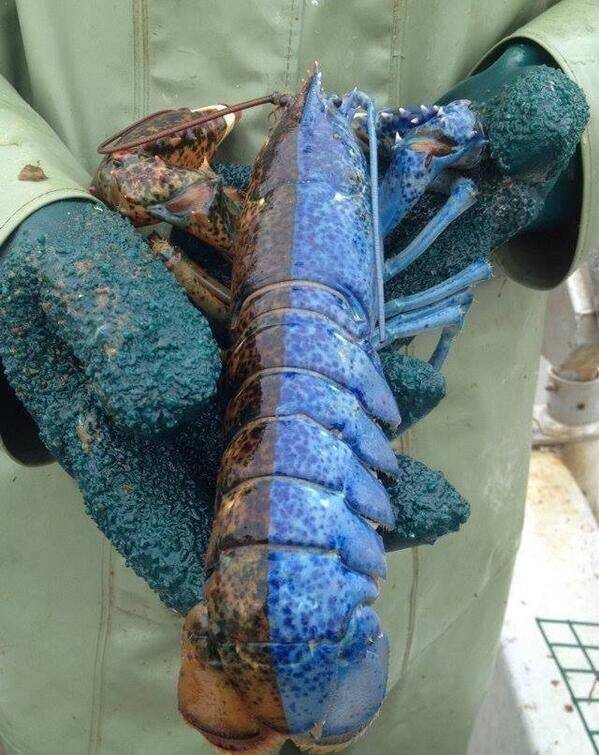 FacebookThe odds of finding this two-toned blue lobster are one in 50 million.

As far as experts know, the blue lobster’s eye-catching appearance only causes a difference in its skin color. However, there is some speculation that they may behave more aggressively than regular-colored lobsters as their bright skin makes them more susceptible to predators. But, then again, lobsters are already known to be a fairly aggressive species.

Lobsters have 10 limbs in total and, like crustaceans, they are closely related to shrimp and crabs. As regular lobsters do, blue lobsters use their strong claws to feed on mollusks, fish, and variations of sea algae.

While their sharp pincers may look intimidating, these creatures won’t do much damage. Blue also lobsters have poor eyesight but this strengthens their other senses like smell and taste. 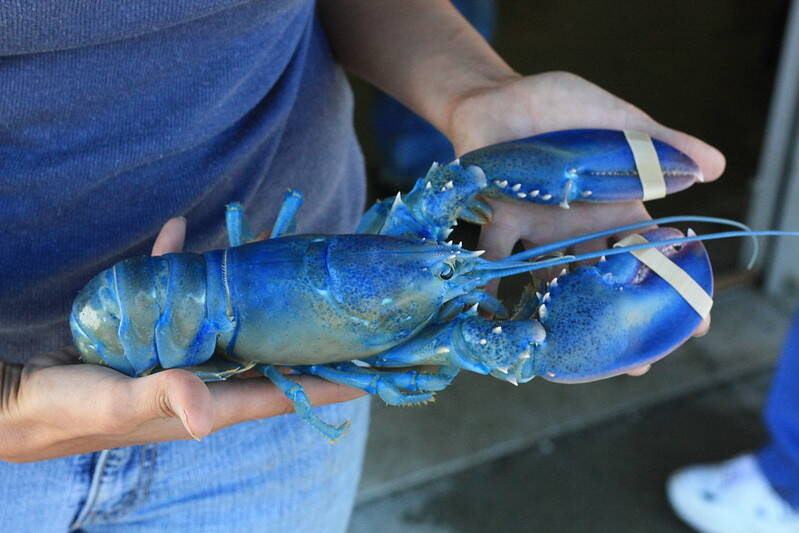 However, their poor vision doesn’t stop them from finding mates. Lobsters breed by laying eggs that the female carries under her abdomen for a year before releasing them as larvae. The larvae are tiny and begin to shed their exoskeleton as they grow.

Once they reach adulthood, lobsters can live up to 50 years.

When and who caught the first blue lobster is unclear. But these stunning rare animals started gaining notoriety in the 2010s when photos of their colorful exterior went viral online.

How Much Are Blue Lobsters Worth? 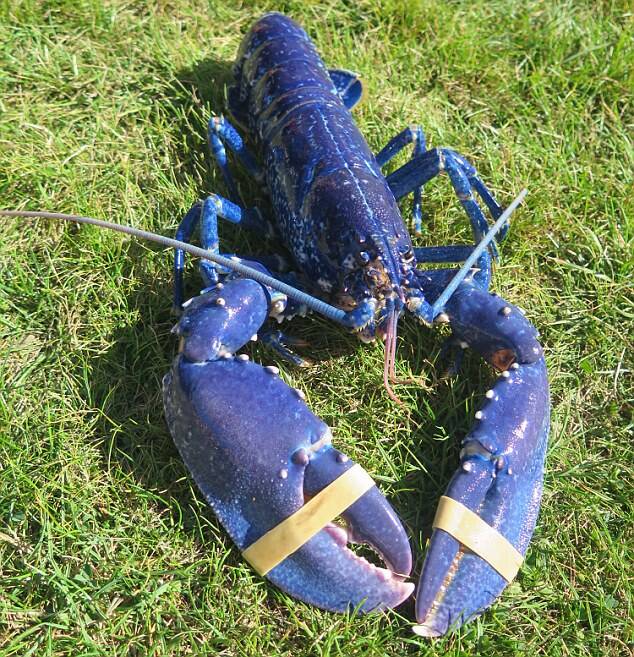 Daily MailThere is no other genetic differences between blue lobsters and regular lobsters confirmed by scientists.

To a degree, many experts consider blue lobsters to be more precious than regular lobsters just because of their rarity. More often, it is this scarcity that begets a higher monetary value — and these rare lobsters are no exception.

Although there’s no scientific evidence to support this, some seafood lovers believe that blue lobsters actually taste sweeter than regular lobsters. That may be why it sold for $60 per pound as a meal at a steakhouse in Maine, U.S.

Although blue lobsters are incredibly rare, there have been numerous reports of fishermen catching them off the coast of Maine, U.S., in recent years.

But lobsters weren’t always considered an expensive meal. In Victorian Europe, people believed lobster was peasant food and even used it as casual fertilizer. Many in the U.S. thought it a cruel treatment to feed prisoners lobster. Eventually, the government passed laws that prohibited prisons from serving them to inmates at all.

Despite what they can fetch at a dinner, the need to preserve these rare creatures has mostly outweighed people’s need for profit. Those who find themselves staring down a blue lobster — be it a fisherman or restaurant cook — are usually compelled to return it to the sea or donate it to an aquarium.

It seems the blue lobster’s unique color is not only beautiful but integral to its survival.

Next, read the history of the Fugate Family of Kentucky whose descendants had blue skin for centuries. Next, read the disturbing story of Grady “Lobster Boy” Stiles, who went from circus act to murderer.