The Raucous Life And Tragic Death Of Bon Scott, Legendary Frontman Of AC/DC

On February 19, 1980, Bon Scott died in London after a night of partying. The official cause was acute alcohol poisoning — but some believe there's more to the story.

On a fateful night in 1980, Bon Scott, the frontman for the Australian rock band AC/DC, climbed into the backseat of a parked car in London. Scott had always been a heavy drinker, even by rockstar standards. And on this particular night, he’d been indulging in his habit at a local club.

A bit worse for wear, Scott quickly passed out after his friends left him in the car to sleep it off. When they returned the next morning, Scott was dead. Since then, questions have persisted about what exactly happened that night, challenging the legacy of one of rock’s most beloved bands.

So who was Bon Scott, and how did he die?

The Early Life Of Bon Scott 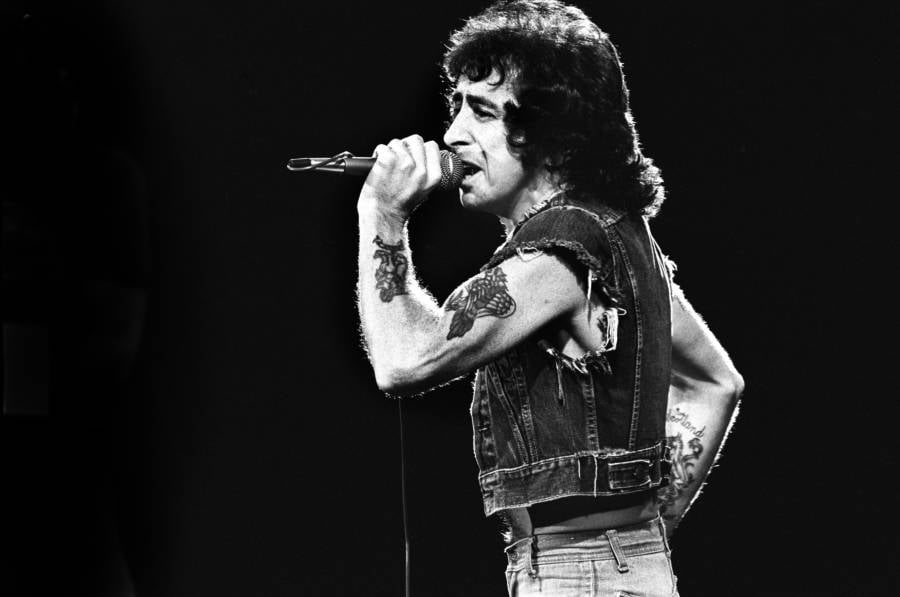 Bon Scott was born Ronald Belford Scott in Kirriemuir, Scotland on July 9, 1946. When he was six, his family decided to move to Melbourne, Australia.

“My new schoolmates threatened to kick the sh*t out of me when they heard my Scottish accent,” Scott later remembered. “I had one week to learn to speak like them if I wanted to remain intact… It made me all the more determined to speak my own way. That’s how I got my name, you know. The Bonny Scot, see?”

That determination to not live the way that others wanted him to would often get Scott into trouble as a young man. He dropped out of school when he was just 15, and he was eventually arrested for stealing gasoline.

Shortly thereafter, he was rejected by the Australian Army and spent several years working odd jobs. But Bon Scott always had a powerful voice and in 1966, he started his first band, the Spektors. Scott found some minor success in these early years while touring with different bands.

But then in 1974, a drunken Scott got into an argument with members of the band that he was playing with. After throwing a bottle of Jack Daniels on the floor, he took off on his motorcycle in frustration. Scott ended up getting into a serious crash and was even in a coma for several days.

By the time Scott recovered, he was looking for a new band. As luck would have it, a band that had recently been formed by two fellow emigrant Scotsmen, Malcolm and Angus Young, was also looking for a singer. 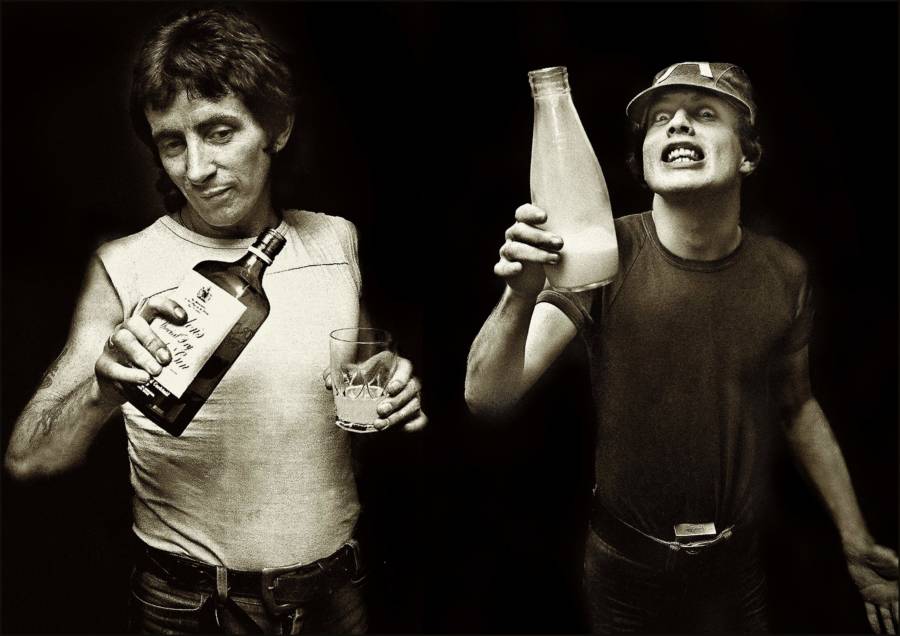 Bon Scott joined AC/DC as the frontman after things didn’t work out with their singer Dave Evans. It was through Scott’s checkered past and rebellious attitude that the band cemented itself as a raucous, crude rock group.

Scott, who had been rejected from the Australian Army because he was “socially maladjusted,” brought that perspective into AC/DC. And it stuck. But the stress of constant touring and performing soon began to wear on Scott. Prone to alcoholism, he drank heavily throughout this period.

For the first time, Scott knew what it was like to have some money in his pocket. But success also strained his relationship with his bandmates.

Scott’s tongue-in-cheek lyrics were always a big part of the band’s chemistry, but he now found himself butting heads with Malcolm and Angus Young over how much credit he was given for all of his work.

After years of touring with the band, Scott was tired of it. Despite being on the cusp of mainstream success, he considered leaving for good so that he could get a handle on his drinking. But he would never get the chance. 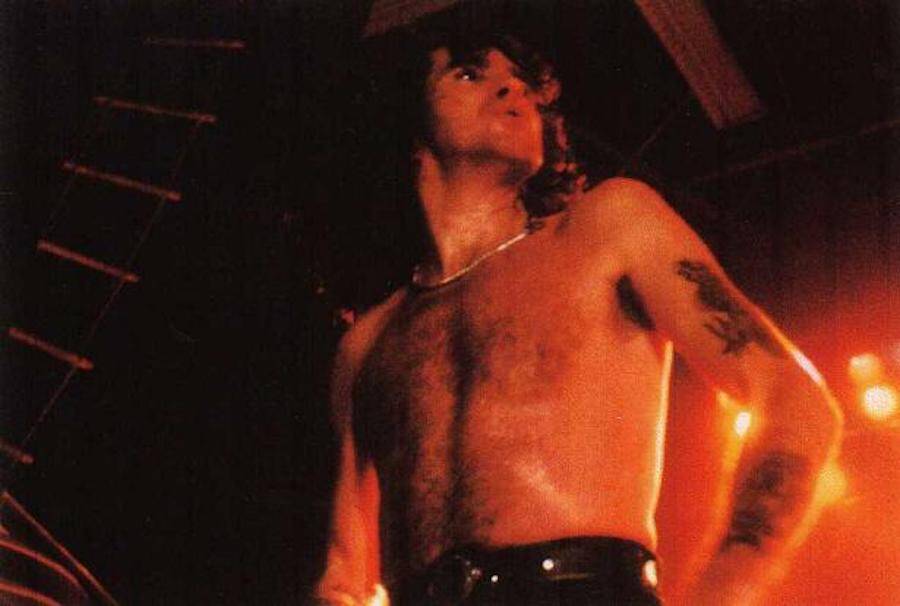 Wikimedia CommonsBon Scott is remembered for helping launch AC/DC to stardom — and for truly “living the lyrics of his songs.”

Bon Scott was in London in February 1980 working on the upcoming Back in Black album. As usual, this meant several nights of wild partying.

On the night of February 18, 1980, Scott met a few friends at the Music Machine club in London. There, he drank heavily before climbing into a parked car that belonged to his friend Alistair Kinnear. His friends figured that he just needed to sleep off the intoxication and sober up.

But then, on the morning of February 19, 1980, Bon Scott was still in the car. His friends found him unresponsive and hunched in the backseat, with the vehicle covered in vomit. Scott was soon taken to a hospital — but he was declared dead on arrival. He was just 33 years old. It was later speculated that his vomit had traveled into his lungs, choking Bon Scott to death.

Scott wouldn’t have been the first rockstar to die this way. In fact, Jimi Hendrix had died from choking on his own vomit just 10 years earlier. Nor would Scott be the last rockstar to meet this fate. John Bonham of Led Zeppelin died in the same manner just a few months after Scott. Ultimately, Bon Scott’s cause of death was found to be “acute alcohol poisoning.”

But the idea that a seasoned partier would die after a few drinks seemed unlikely to many. As biographer Jesse Fink wrote in a later account of Bon Scott’s death, “He was a prodigious drinker. The idea that seven double whiskeys would put him in the ground seems a strange notion.”

Combined with the confusing initial reports about the death, this fact gave rise to several conspiracy theories. Some have even suggested that he may have been murdered by someone who redirected the exhaust from the car, possibly because the other members of the band wanted to get rid of him.

This theory of foul play is unlikely. Instead, it’s possible that drugs might have played a role in his death. Scott was known to use heroin, and many of the people he was with on this final night were reportedly linked to hard drugs.

“When he got to London the in thing was snorting smack… and it was brown heroin and very strong. All the characters linked to Bon in the last 24 hours of his life were allegedly associated with heroin. Heroin was a recurring theme in his death,” Fink wrote.

Scott had reportedly already overdosed twice on heroin by the time of his death. Combined with alcohol, a third overdose could have killed him.

The Controversies Over Back In Black 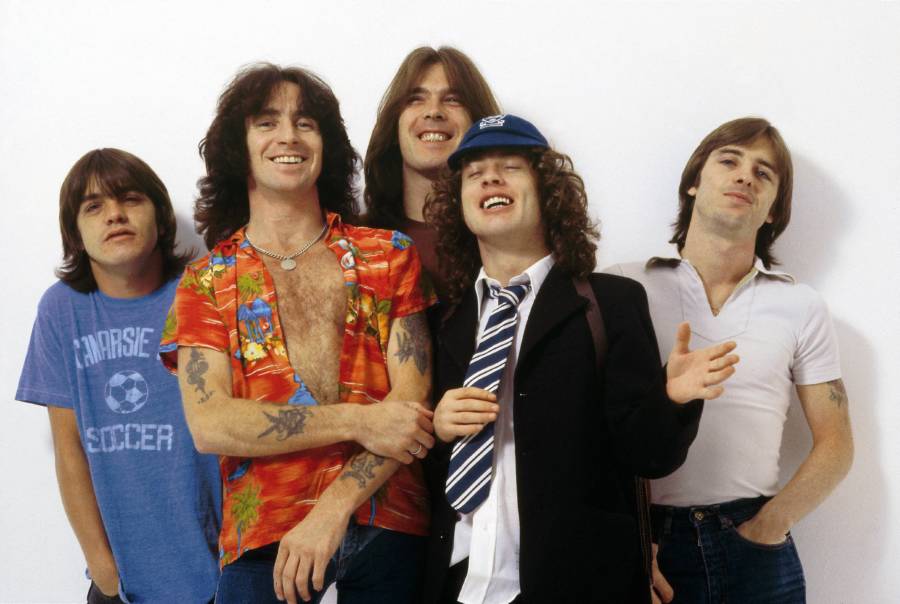 Regardless of Bon Scott’s mysterious cause of death, his heartbroken bandmates were forced to decide between quitting AC/DC or finding another man to take his place. They eventually chose the latter option.

Bon Scott was replaced by English singer-songwriter Brian Johnson and AC/DC continued to enjoy success, especially upon the release of their album Back in Black that debuted just five months after Scott’s death.

Some speculate that Scott had written much of what’s featured on the album. An ex-girlfriend of his claims to have seen his journals with lyrics to the famous hit “You Shook Me All Night Long” prior to his death.

Some felt that he deserved posthumous credit for the album, rather than his replacement Brian Johnson. After all, Scott had helped launch the band to fame and was critical to their early success as a group.

Scott’s body was returned to Australia, where his grave became a shrine for those who appreciate the unique lyricism he brought to the band.

As Vince Lovegrove, a member of an early band that Scott played with, said, “The thing I loved most about Bon Scott, was his almost unique self. What you saw was what you got, he was a real person and as honest as the day is long. To my mind, he was the street poet of my generations and of the generations that followed.”

After reading about Bon Scott, check out the rockstars who joined the 27 Club. Then, learn about rock’s ultimate wild man GG Allin.