On May 23, 1934, Bonnie Parker and Clyde Barrow died in a hail of gunfire inside their car as Texas and Louisiana lawmen riddled their bodies with dozens of bullets. 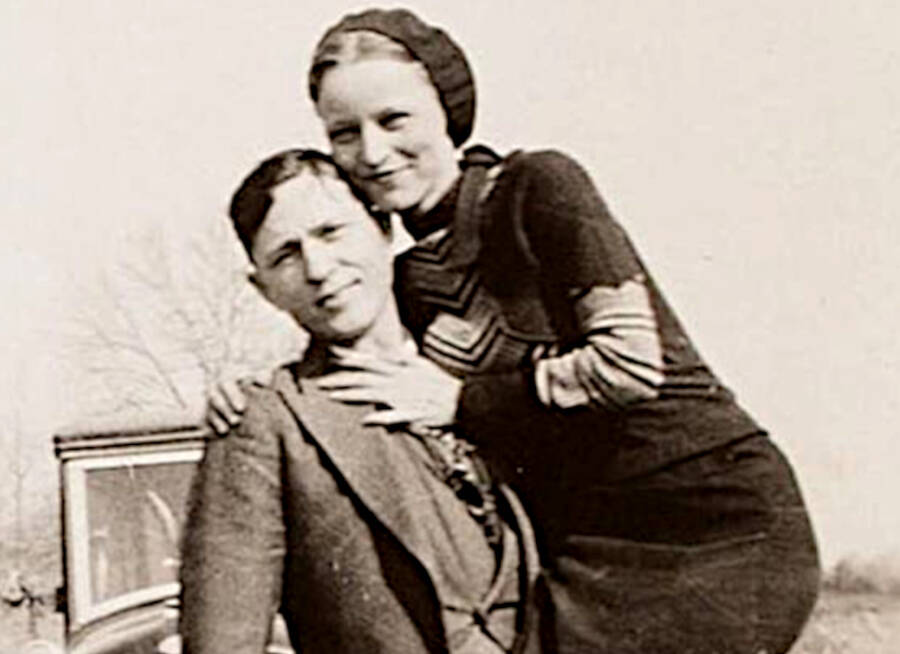 By the early 1930s, Bonnie Parker and Clyde Barrow were already two of the most notorious criminals in the United States. But in 1934, Bonnie and Clyde’s death would cement the duo into true crime legend.

They started out as two young kids from Texas — Bonnie as a waitress, Clyde as a laborer — but they soon got swept up in the thrill of the “Public Enemy Era,” typified by gangsters like John Dillinger and Baby Face Nelson.

After meeting and falling in love, Bonnie and Clyde bounced from one town to the next, robbing banks, small businesses, and gas stations — and becoming media darlings. In the press, Clyde was often portrayed as a rebellious gangster, and Bonnie was seen as his lovestruck partner in crime.

But the couple’s infamy also made the police all the more determined to catch them. As the duo tore throughout the country, from Texas to Minnesota, authorities worked tirelessly to track them down.

Before long, the duo’s crime spree came to a grisly end worthy of two dramatic gangsters. After Bonnie and Clyde died, newspapers breathlessly covered their death just as they had covered their crimes. Soon, Americans everywhere were gawking at the gruesome photos of their demise.

But what led up to that bloody moment in the first place?

How Bonnie And Clyde Became America’s Most Infamous Outlaw Couple 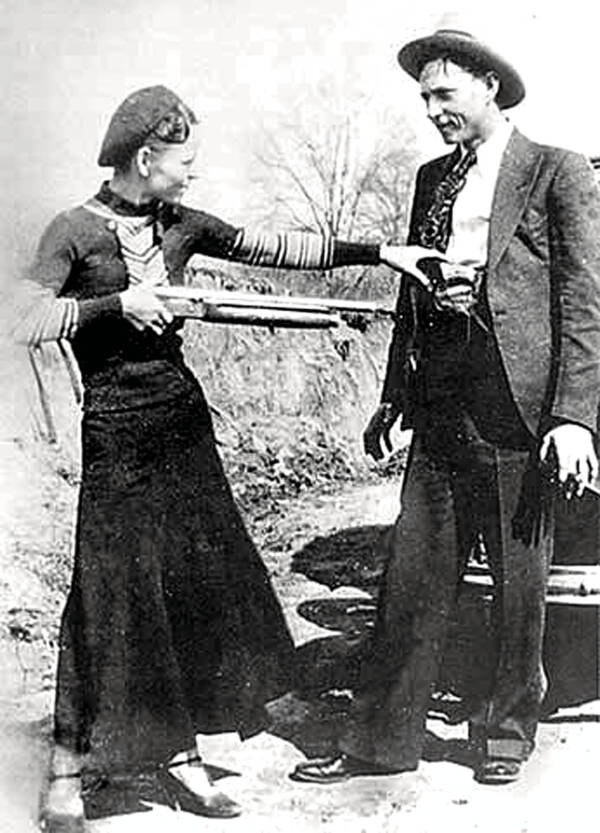 Wikimedia CommonsBonnie and Clyde posing for a camera, which they later left at a crime scene.

Both Bonnie Parker and Clyde Barrow were born in Texas — Clyde in 1909 and Bonnie in 1910. At first glance, they seemed like an unlikely couple. Bonnie was known for being a good student who enjoyed writing poetry. Meanwhile, Clyde grew up in a poor family on a farm. He was arrested for the first time in 1926 for failing to return a rental car.

Nevertheless, it was love at first sight. When they met through a friend in 1930, Bonnie was already married to another man. But she quickly realized that she only had eyes for Clyde. Although Bonnie never officially divorced her husband, she remained devoted to Clyde, even when he went to prison.

She waited for Clyde while he served a two-year prison sentence. And even though he emerged from prison changed — one friend noted that Clyde went from “a schoolboy to a rattlesnake” — Bonnie stuck by his side. 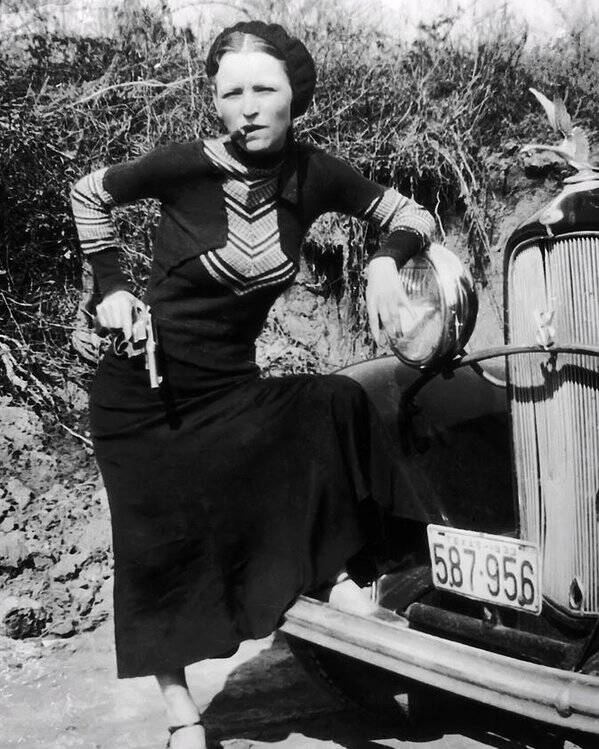 Wikimedia CommonsThis photo of Bonnie cemented her as Clyde’s cigar-smoking sidekick in the American imagination.

Soon afterward, their life of crime began in earnest, as the duo started committing several robberies together. But before long, Clyde’s crimes began to escalate. After one of his accomplices killed a store owner in 1932, Clyde decided to go on the run. And he took Bonnie with him.

By 1933, Bonnie and Clyde had become quite infamous for their crimes — especially after a shootout in Joplin, Missouri left two police officers dead. A later investigation of the crime scene turned up a camera full of pictures of the couple, which swiftly ran in newspapers across the country.

Papers like The New York Times described the duo in provocative terms. Clyde was a “notorious Texas ‘bad man’ and murderer” and Bonnie was “his cigar-smoking, quick-shooting woman accomplice.”

After two years on the run, Bonnie and Clyde had killed at least 13 people. And the authorities were hot on their trail.

The Bloody Death Of Bonnie And Clyde 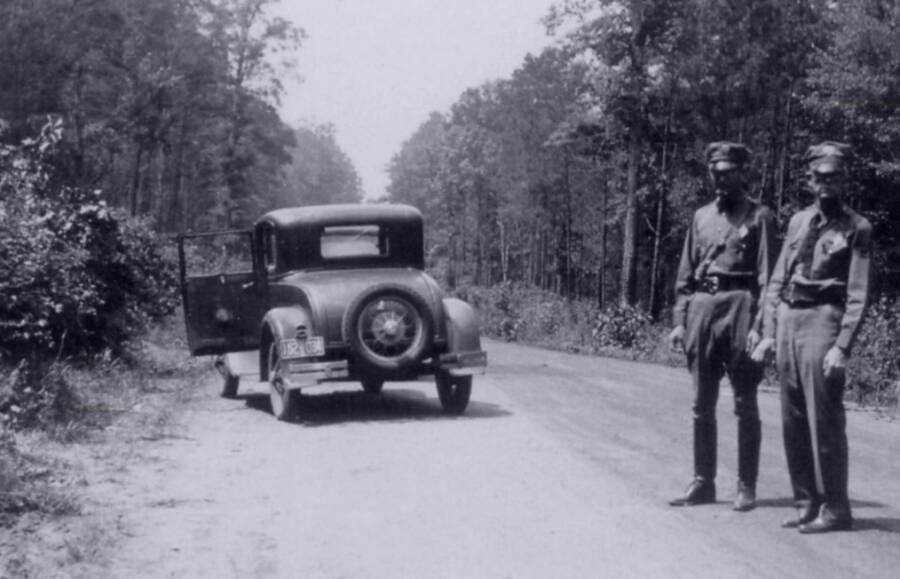 On the evening of May 21, 1934, a posse of six police officers from Texas and Louisiana set up an ambush on a rural road in Bienville Parish, Louisiana. They were ready to take out Bonnie and Clyde for good.

In the months leading up to the ambush, the authorities had heavily intensified their focus on the duo. Back in November 1933, a Dallas grand jury had issued a warrant for their arrest. One of their gang members, W.D. Jones, had been arrested in Dallas in September and had identified Bonnie and Clyde as the perpetrators of several crimes.

And after the murder of a man in Texas a few months later, another warrant was issued. A farmer who claimed to have witnessed the murder said that Bonnie had held the gun and laughed as the man died. Although the witness may have exaggerated Bonnie’s involvement, this changed the public’s perception of her. Previously, she was seen primarily as a bystander.

Unsurprisingly, the farmer’s account made several headlines, and police in Texas offered a $1,000 reward for the pair’s bodies — not their capture. 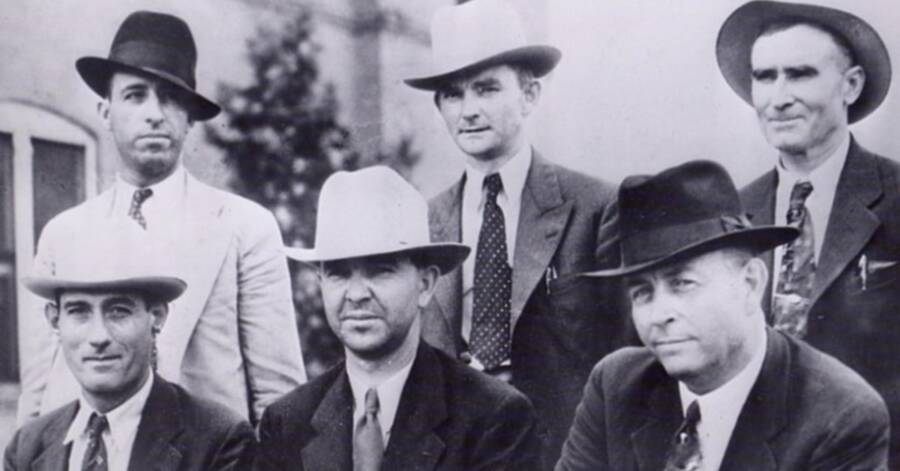 Wikimedia CommonsThe posse responsible for the capture and killing of Bonnie and Clyde.

Now, the police were ready to act. To kill the infamous couple, authorities trained their sights on a known accomplice of theirs named Henry Methvin. He had family in Bienville Parish. And authorities suspected that Methvin, Bonnie, and Clyde would head to the Methvin house if they got separated.

They enlisted Methvin’s father, whom Bonnie and Clyde knew, to wait on the side of the road as bait. Then, they waited. And waited. Finally, around 9 a.m. on May 23, the police saw Clyde’s stolen Ford V8 speeding down the road.

Upon seeing Methvin’s father parked on the side of the road, Bonnie and Clyde took the bait. They pulled over, presumably to ask him for help.

Then, before they had time to get out of the car, the police officers opened fire. Clyde was killed instantly by a shot to the head. One of the officers recounted hearing Bonnie scream as she realized he’d been hit.

The police kept firing. They emptied their entire supply of ammunition into the car, firing about 130 rounds in all. By the time the smoke cleared, Bonnie Parker and Clyde Barrow were dead. Bonnie was 23 years old. Clyde was 24.

The Grisly Aftermath: Photos Of Bonnie And Clyde’s Death Scene 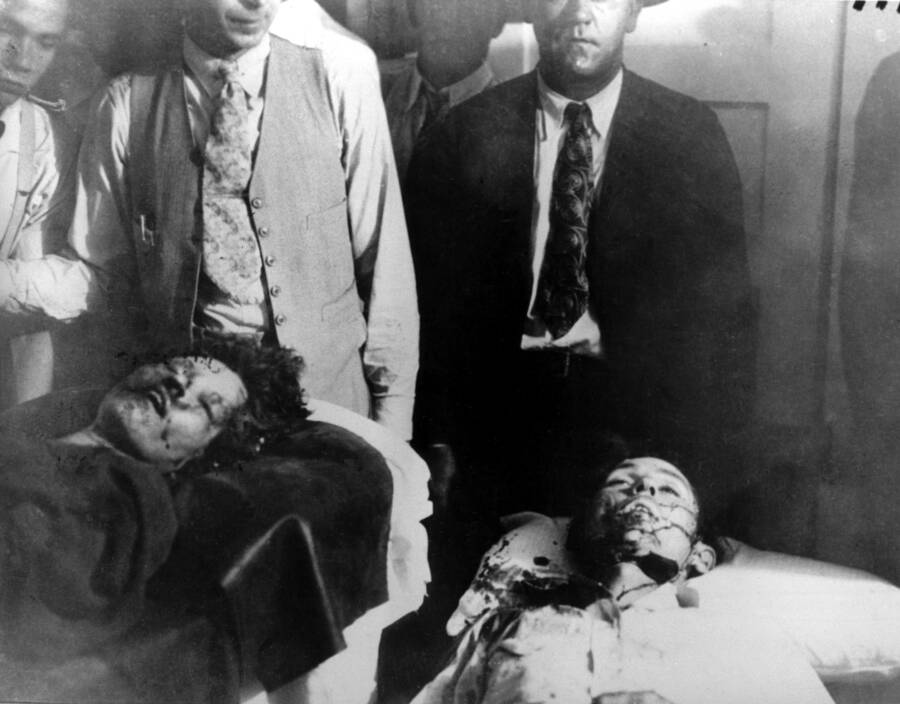 HuffPost UKAfter Bonnie and Clyde’s death, photos of their corpses became a source of morbid fascination for Americans.

The scene of Bonnie and Clyde’s death quickly descended into chaos. Police struggled to beat back looters who were determined to snatch a souvenir. One man took pieces of Bonnie’s bloodstained dress and another tried to cut off Clyde’s ear. By the time the authorities came to remove the bodies, there was a massive crowd of people around the corpses.

Shortly after Bonnie and Clyde’s death, the coroner stated that Bonnie had been shot 26 times and Clyde had been shot 17 times. However, some researchers have since claimed that they were actually shot more than 50 times each. The undertaker even reported that he had difficulty embalming the bodies due to the large number of bullet holes. 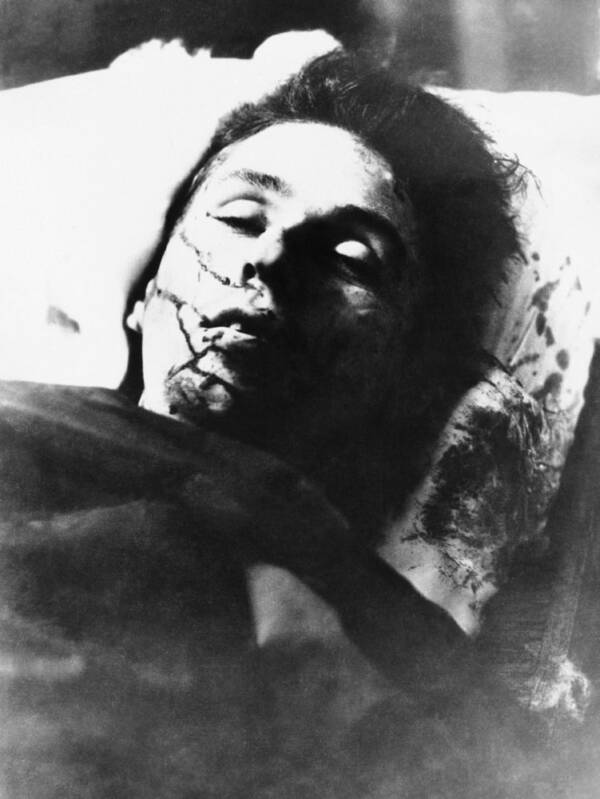 HuffPost UKClyde Barrow after his death.

Indeed, they had died so brutally that two jurors later became nauseated after looking at the photos of Bonnie and Clyde’s death scene.

In the aftermath, the police faced some criticism for not calling out a warning before they opened fire on the couple. But according to the officers, they were determined to not give the pair a chance to escape — or fire back at the lawmen. As two of the officers later stated:

“Each of us six officers had a shotgun and an automatic rifle and pistols. We opened fire with the automatic rifles. They were emptied before the car got even with us. Then we used shotguns. There was smoke coming from the car, and it looked like it was on fire. After shooting the shotguns, we emptied the pistols at the car, which had passed us and ran into a ditch about 50 yards on down the road. It almost turned over. We kept shooting at the car even after it stopped. We weren’t taking any chances.” 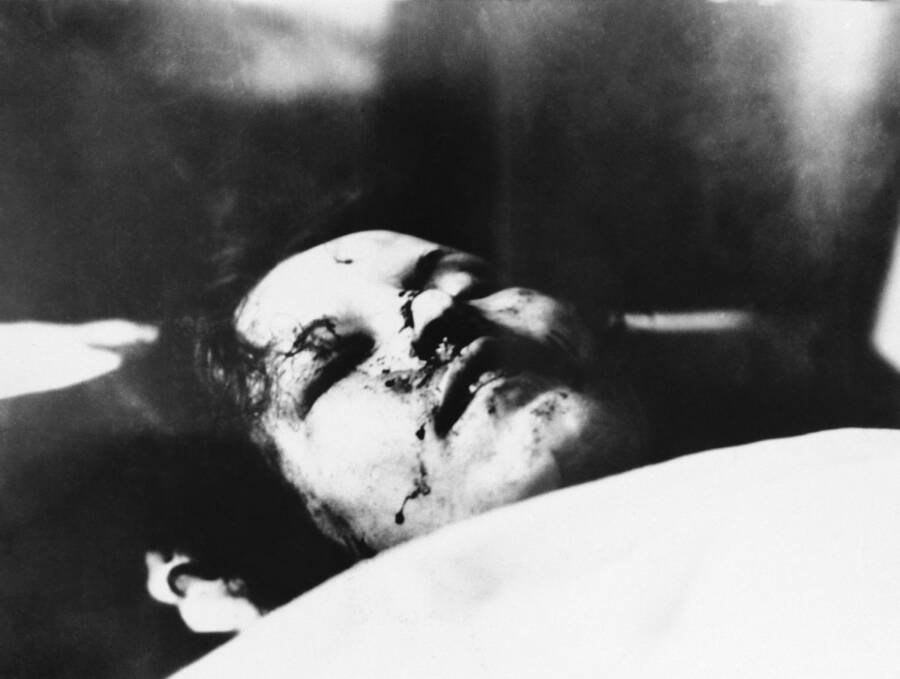 HuffPost UKBonnie Parker in the morgue.

To that point, it certainly appeared that the two outlaws were prepared to defend themselves. After their death, police found multiple weapons inside their stolen car, including rifles, shotguns, revolvers, pistols, and 3,000 rounds of ammunition. And Bonnie died with a gun held on her lap.

The Enduring Legacy Of The Criminal Duo 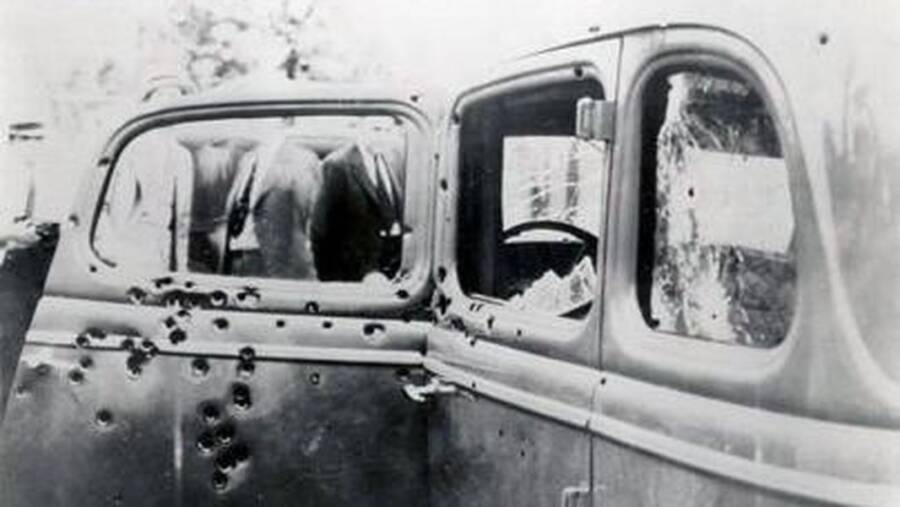 Wikimedia CommonsA photo of Bonnie and Clyde’s “death car,” where they spent their bloody final moments.

In life, Bonnie and Clyde were inseparable. But in death, that was not the case. Though they had both expressed a desire to be buried together after they died, Bonnie’s family wouldn’t allow it. Bonnie and Clyde were both laid to rest in Dallas, Texas — but they were buried in separate cemeteries.

However, the enduring legacy of Bonnie and Clyde’s story binds them together for eternity. People remain enthralled by this criminal couple’s story — their relationship, their violent crimes, and their bloody demise. And eerily, Bonnie and Clyde’s death photos continue to fascinate the public.

In the aftermath of their death in 1934, Clyde’s stolen Ford V8 — often dubbed the “death car” — made its rounds across the country. Riddled with bullet holes and bloodstains, it was a popular tourist attraction displayed at fairs, amusement parks, and flea markets for almost 40 years, before it ultimately settled at Whiskey Pete’s Hotel and Casino in Primm, Nevada. 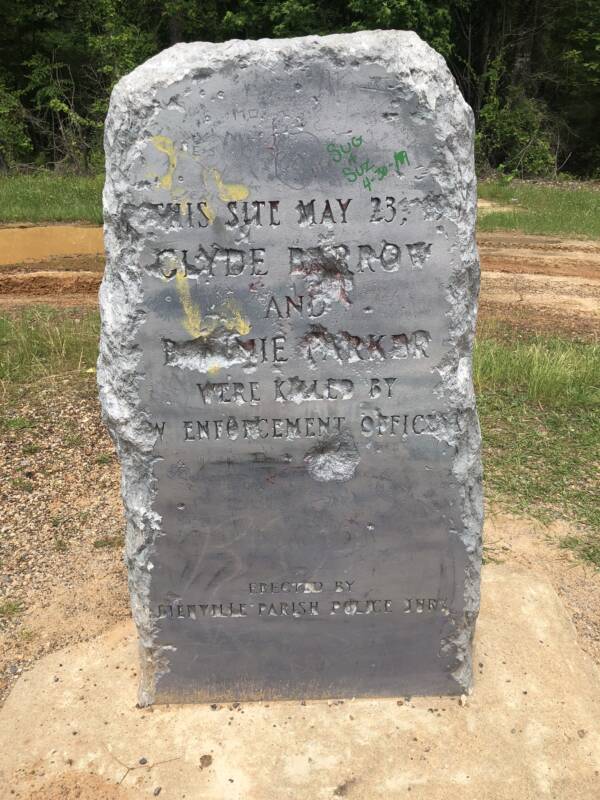 In 1967, the notorious duo got a fresh boost of celebrity thanks to the release of the Oscar-winning movie Bonnie and Clyde. In the film, the couple is glamorously depicted by Faye Dunaway and Warren Beatty.

More recently in 2019, they were portrayed yet again in the Netflix movie The Highwaymen — proving that the public’s fascination with Bonnie and Clyde hasn’t faded, even though nearly a century has passed since they died.

Today, the Bonnie and Clyde death scene is eerily quiet. A stone marker lays out the facts of their demise in bare-bone details: “At this site May 23, 1934 Clyde Barrow and Bonnie Parker were killed by law enforcement officials.”

After reading about Bonnie and Clyde’s death, check out the female gangsters who ruled the underworld during the 1930s. Then, learn about some of the most infamous gangsters of the 1920s.