In 1933, Blanche Barrow agreed to join Bonnie and Clyde on their infamous crime spree — but only because she was married to Clyde's older brother. 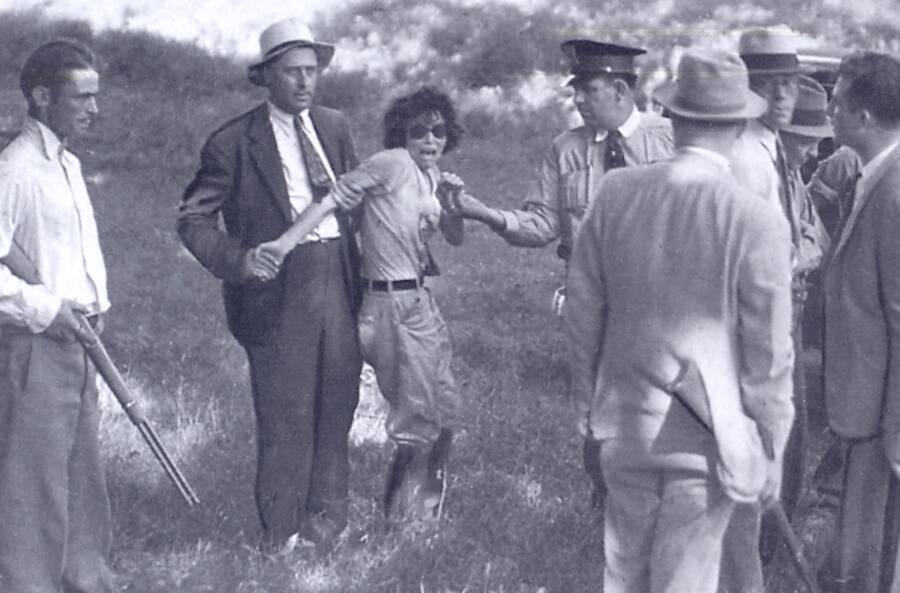 Wikimedia CommonsBlanche Barrow in 1933, shortly after she was captured by authorities.

During the Great Depression, Bonnie Parker and Clyde Barrow were perhaps the most infamous criminal couple of the American Midwest and Southwest. But they weren’t alone during their crime spree — they were joined by Clyde’s sister-in-law, Blanche Barrow. Unlike Bonnie and Clyde, however, Blanche was not exactly thrilled about joining a gang.

Blanche only tagged along because she was married to Clyde’s brother, Buck. When the Barrow siblings decided to live a life of crime, Bonnie followed Clyde without hesitation. But Blanche, who hoped to turn Buck away from his criminal past, wasn’t as eager to follow her husband. Unfortunately, her love for him proved to be stronger than her moral compass.

This is the true story of Blanche Barrow, the reluctant accomplice who rode with Bonnie and Clyde — and lost the man she loved along the way.

The Early Life Of Blanche Barrow 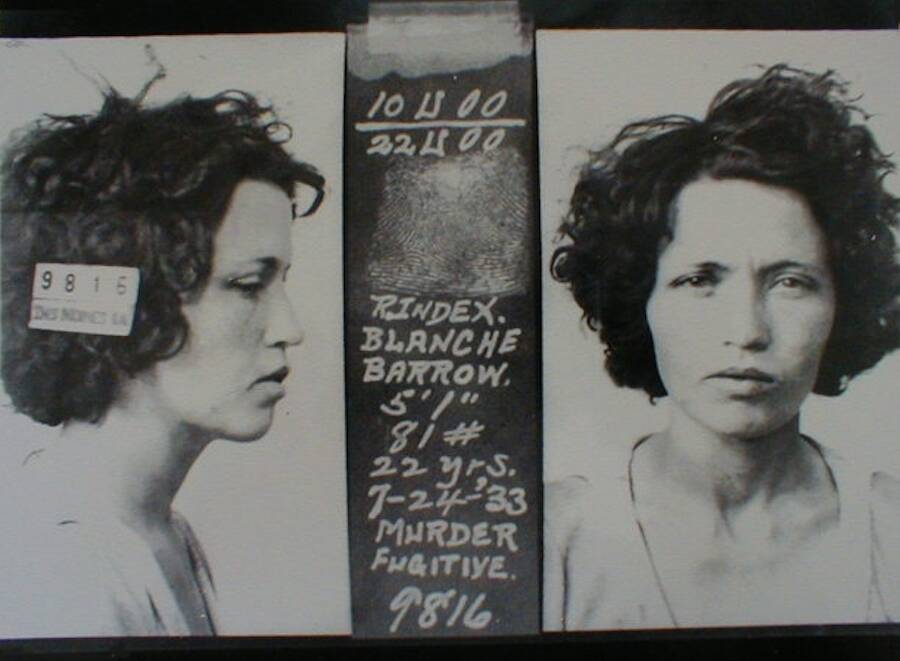 The path that led Blanche to the Barrows was marked by a series of unfortunate circumstances in her early life.

Born Bennie Iva Caldwell on January 1, 1911, in a small town in Oklahoma, Blanche Barrow was mostly raised by her father after her parents divorced. However, it was her mother who decided to marry her off to a much older man named John Calloway when she was just 17 years old.

According to Blanche, Calloway was a violent man whose physical abuse left her unable to bear children. While hiding from Calloway in Dallas in 1929, Blanche happened to meet Buck by chance. Though Buck was a twice-divorced criminal, Blanche quickly fell for him. Unfortunately, he was arrested during a burglary shortly after their first meeting.

But Buck had taken such a liking to Blanche that when he broke out of prison, she was the first person he went to see. In 1931, the pair got married. Unwilling to live in fear, Blanche Barrow convinced him to turn himself in. Luckily for her, Buck was paroled after just two years in 1933.

But shortly after Buck was released, he ran into his brother Clyde — who was already in the midst of a crime spree. By this point, Clyde was a seasoned criminal, and he had taken his girlfriend Bonnie along for the ride.

Now, the notorious couple wanted Buck and Blanche to join them on their misadventures. Buck happily obliged. While Blanche did not want to come along, she ultimately followed her husband.

On The Run With Bonnie And Clyde 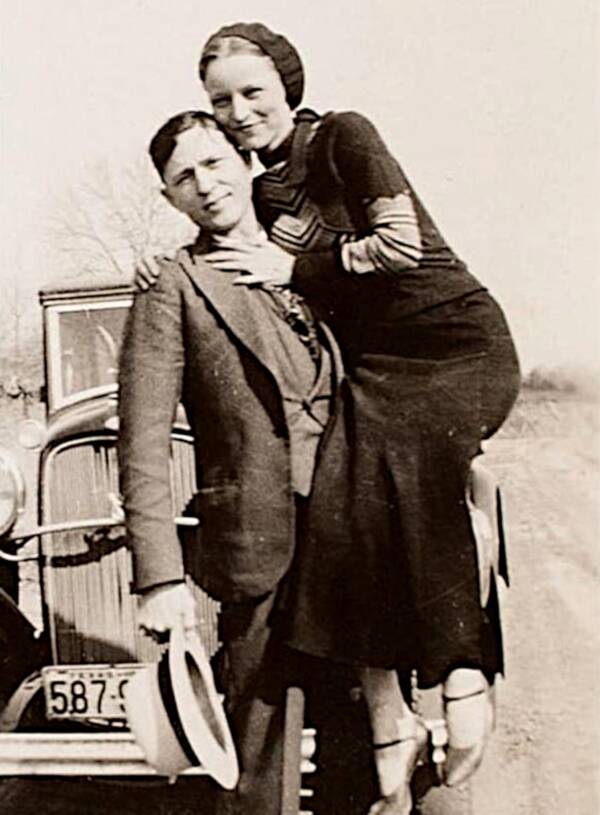 Wikimedia CommonsBonnie and Clyde posing in front of their Ford V8 in 1932.

For four months in 1933, Buck and Blanche Barrow accompanied Bonnie and Clyde on a whirlwind trip of crime and debauchery. From shootouts to robberies to drunken nights, it was unlike anything Blanche had ever experienced — and she had many mixed feelings about the situation.

Buck was the only reason why Blanche Barrow had left her old life behind. So she often felt aggravated by Bonnie and Clyde’s antics. When the couple wasn’t plotting their next move, they spent a lot of time getting drunk and playing card games. So it usually fell on Blanche to cook and clean.

But even though Blanche wasn’t a fan of the couple at first, she eventually did bond with them on some level. She took pity on Bonnie’s dependency on alcohol and sympathized with her unconditional love for Clyde — which she could likely relate to because of her own relationship with Buck.

“We laughed about a lot of things that we should have taken more seriously,” Blanche later wrote in her autobiography, My Life with Bonnie and Clyde. “But no matter how serious or dangerous the situation was, we always found something to laugh about later on. It always seemed better to laugh than to cry. We had to laugh to keep from crying.”

It didn’t take long for Blanche to discover that the life of a fugitive wasn’t as romantic as the stories made it out to be. One night, while the group was hiding out in a remote cabin in Joplin, Missouri, she heard something that sounded like “someone had turned a machine gun on the place.” 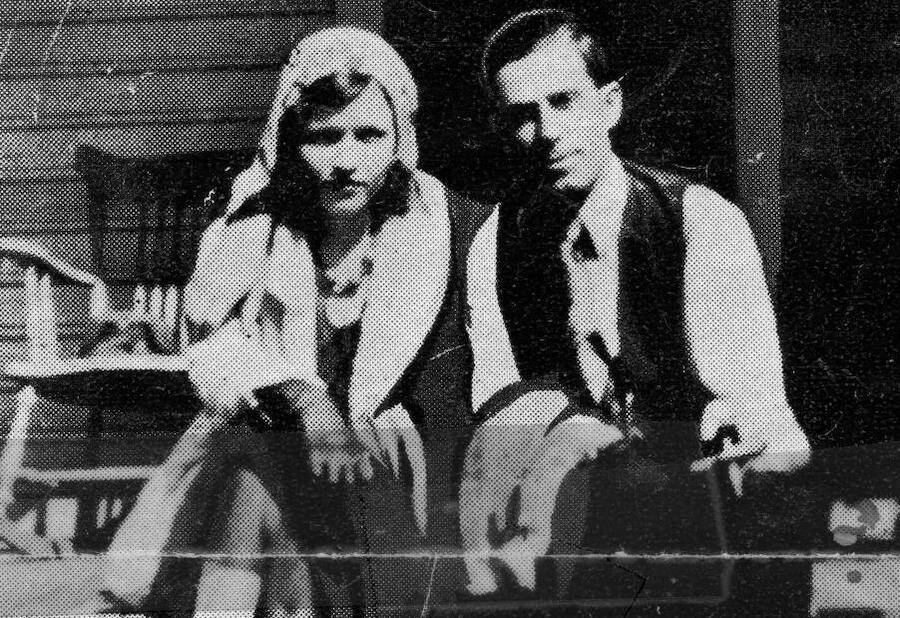 Public DomainBlanche and Buck Barrow in an undated photo.

At first, she thought that Clyde had accidentally discharged a weapon and couldn’t stop shooting. But then, Buck told her the cops were there — and they had to leave immediately.

The shootout that followed scared off the couple’s dog, who ran away. Blanche braved a hailstorm of bullets trying to catch the pup — but she was pulled into Clyde’s car before she could grab her pet. Two policemen were killed in the shootout. And as the couples drove off, Blanche felt as if “all my hopes and dreams [were] tumbling down around me.”

Unfortunately for the gang, the dog wasn’t the only thing that was left behind during the escape. As they drove away, Blanche realized that she had forgotten a slew of important papers, including the document confirming Buck’s pardon and her marriage certificate. She had also left behind several photos that the group had taken while they were all on the road.

Not only was this a major problem for Blanche Barrow, but it was also a treasure trove for law enforcement — who needed all the information about the gang that they could possibly get their hands on.

It didn’t take long for authorities to track the gang down outside of Platte City, Missouri. And once they did, another shootout ensued. In this melee, Buck was shot in the head and Blanche was hit by flying glass. While they were able to narrowly escape to Iowa, this was the beginning of the end. 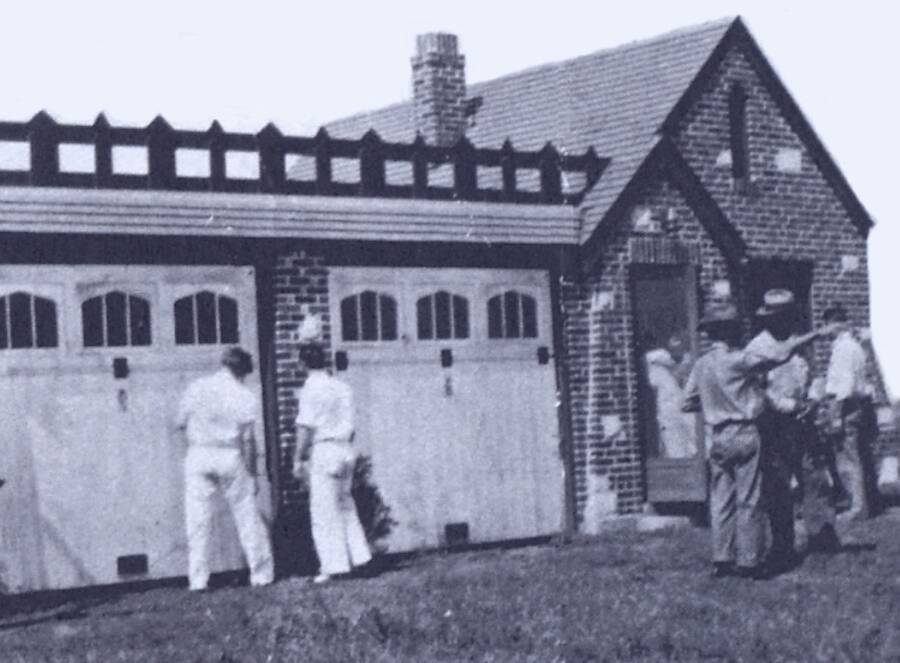 Wikimedia CommonsRed Crown Tourist Court in Missouri, the site of a gun battle between Bonnie and Clyde’s gang and the police.

While the police couldn’t stop Blanche Barrow’s car, they did manage to shoot the front window. As it broke, pulverized glass was swept into her left eye, which caused permanent damage to her vision.

Finally, a shootout near an abandoned theme park in Iowa led to Buck and Blanche Barrow’s arrest on July 24, 1933. At this point, Blanche weighed just over 80 pounds. And her eyesight was so bad that she mistook a camera pointed at her for a weapon. But that was nothing compared to Buck’s head injury — which was so gruesome that his brainpan was exposed.

As Bonnie and Clyde made yet another narrow escape, Blanche and Buck were taken to a nearby doctor. Buck required surgery on his wounds, and he would ultimately die from pneumonia contracted during the operation. Meanwhile, Blanche survived her injuries — and needed to face the law.

She was then extradited to Missouri, where she’d be charged with assault with intent to kill during the previous shootouts. But while authorities were happy to have captured her, Bonnie and Clyde were still on the loose. Police were obviously eager to find them — and they also wanted to figure out if there were any other gang members on the run.

As one might expect, Blanche was subject to intense interrogation of her friends’ whereabouts. And at one point, she was even questioned by the notorious FBI director J. Edgar Hoover. When she refused to help him with his investigation, Hoover allegedly threatened to gouge out her uninjured eye.

Undeterred, Blanche maintained that the main reason why she had joined the gang was to be close to her beloved late husband. And though she had her issues with Bonnie and Clyde in the past, she refused to give them up while they were still on the run. She apparently remained loyal to them until the day they were both killed by police in Louisiana on May 23, 1934.

Why Blanche Barrow Hated The Bonnie and Clyde Movie 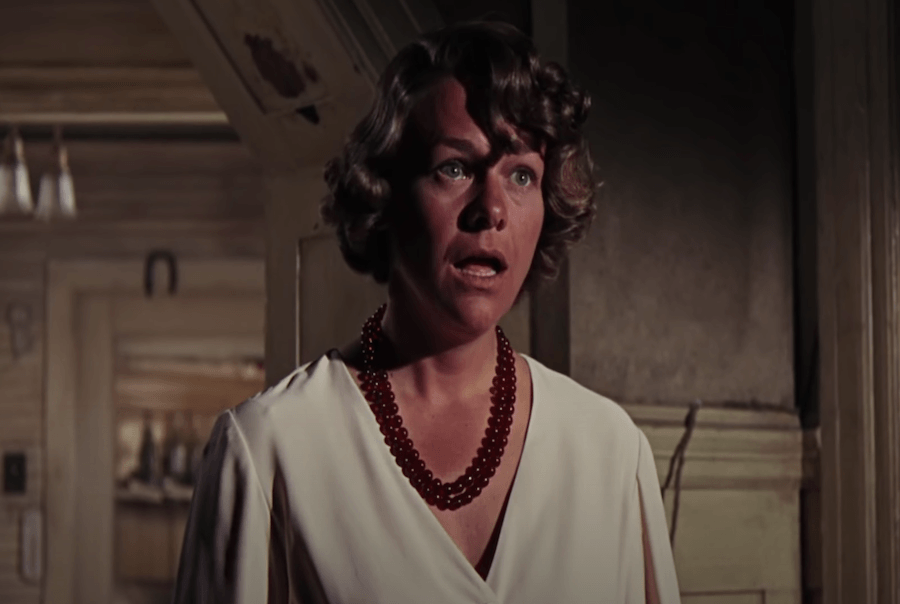 YouTubeEstelle Parsons as Blanche Barrow in the 1967 movie Bonnie and Clyde.

Blanche Barrow would ultimately serve six years in prison for her role in the crimes committed by the Barrow gang.

But even after she left prison, Blanche’s memories of her time with Bonnie and Clyde stayed with her for the rest of her life. “I talk of those incidents as if I were not a part of it,” she once reportedly said, “like a character in a book I once read. It’s the only way I keep from going crazy.”

Since she was one of the only people close to Bonnie and Clyde who’d survived their wild ride, Blanche was involved in the production of the 1967 film Bonnie and Clyde. She’s widely credited with transforming the story into movie magic — and helping cement the title characters’ infamous legacy.

However, she hated the way that she was portrayed in the movie. Even though Estelle Parsons won the Academy Award for Best Supporting Actress for her portrayal of Blanche Barrow, the real Blanche complained that the film “made me look like a screaming horse’s ass.”

As for Blanche’s personal life, she missed Buck terribly for years. However, she eventually ended up marrying a new man named Eddie Frasure, and she would stay by his side until his death in 1969. After Frasure died, Blanche Barrow lived alone until 1988 — when she died of cancer at the age of 77.

Blanche’s life presents another angle of Bonnie and Clyde’s infamous story. A law-abiding citizen who wanted to live a normal life with the man she loved, Blanche Barrow let her love for Buck lead her into a life of heinous crimes that would haunt her for the rest of her days.

After learning about Blanche Barrow, take a closer look at the gruesome death of Bonnie and Clyde. Then, read about Carole Ann Boone, who fell in love with Ted Bundy while he was on death row.