Depending on whom you ask, repurposing books is either beautiful or blasphemy. The very idea of cutting up pages with an X-acto knife or pulling a leather cover off an old novel to make a purse is enough to make some book lovers wince. But the artists featured below argue that they are not so much destroying as they are giving forgotten volumes a new life.

Many of the pieces here were created from books that nobody had cracked open in years, and like outdated science textbooks would probably have soon found their way into the recycling bin. Of course, this argument doesn’t work as well for the art pieces fashioned out of still-revered vintage novels. Although book upcycling is a controversial art, its physical beauty is undeniable. 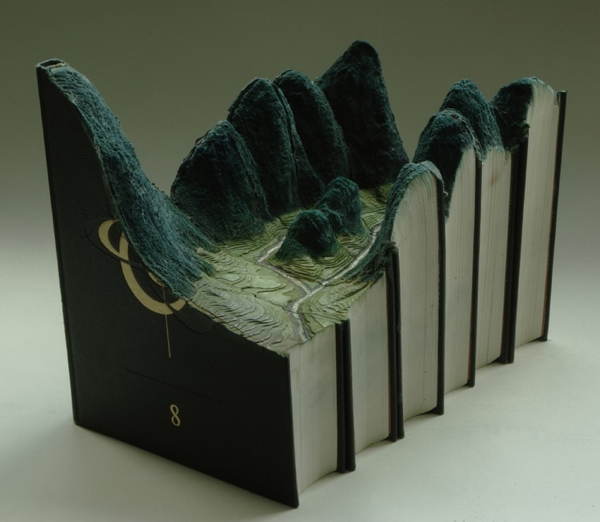 “It is recycling, but not just in the material sense; it’s a recycling of ideas, images, text, and textures from our cultural past. We pull from the past to make something new, the way art always has.” --Brian Dettmer, from the preface of Art Made from Books: Altered, Sculpted, Carved, Transformed Source: Wordpress. 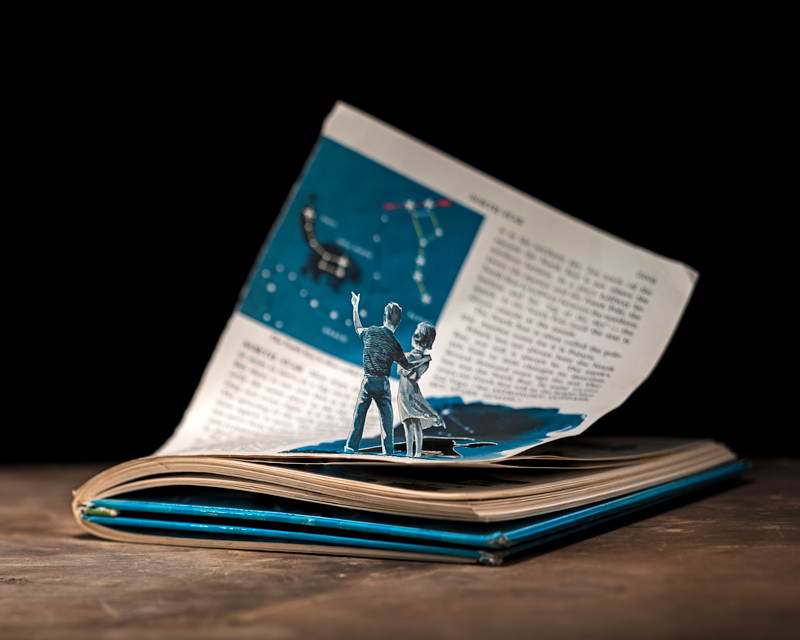 “Baby, I’ll give you the stars!” This piece, Bearings, is from an exhibit of cut book illustrations by Thomas Allen called Beautiful Evidence. Using only science textbooks for the series, he created sweet--but not saccharine--little scenes of people interacting with astronomy and other scientific concepts. Source: Inhabitat 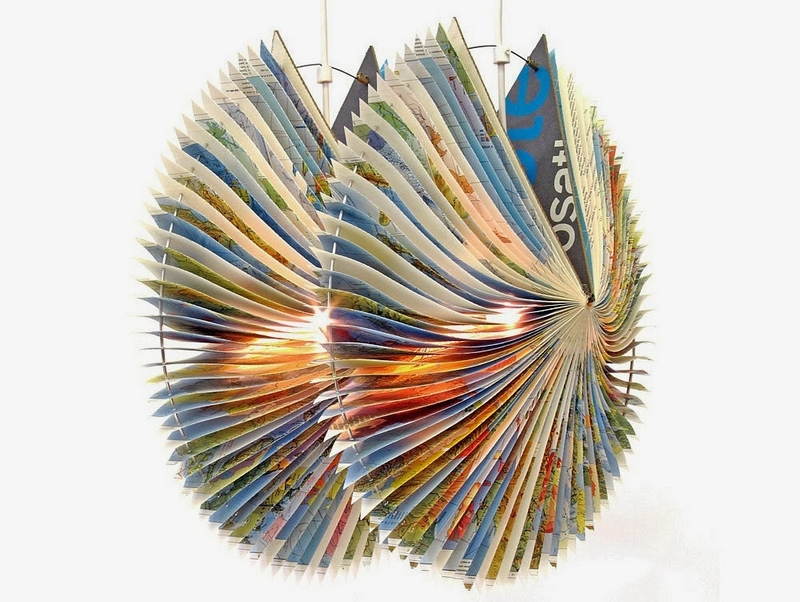 This beautiful lamp, Orbit, is just one of several styles of “booklamps” made by Michael Bom and Antoinet Deurloo of Bomdesign in Rottingham, the Netherlands. Source: Travel Between The Pages 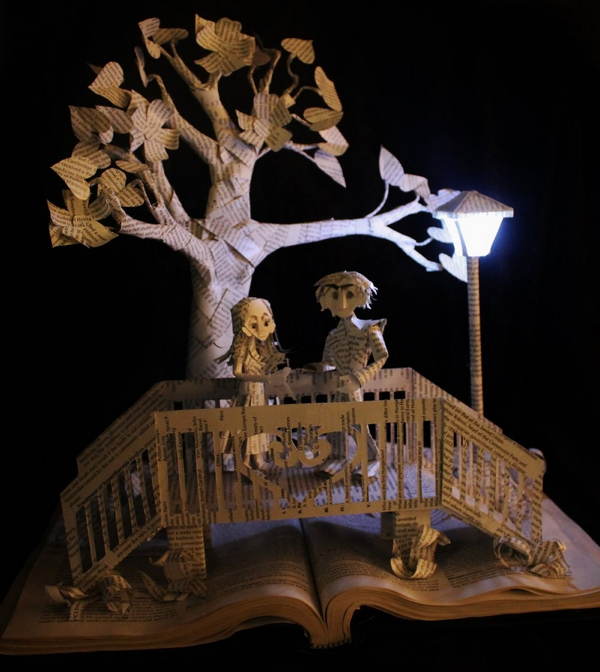 Jodi Harvey-Brown of Wet Canvas Art in Delta, Pennsylvania, sculpts books to reflect the stories they tell, like the fairy tale “Little Red Riding Hood” and the classic Johann David Wyss novel, Swiss Family Robinson. This one, Parisian Bridge, was commissioned by a jewelry designer and depicts a couple in love in the City of Lights. Source: 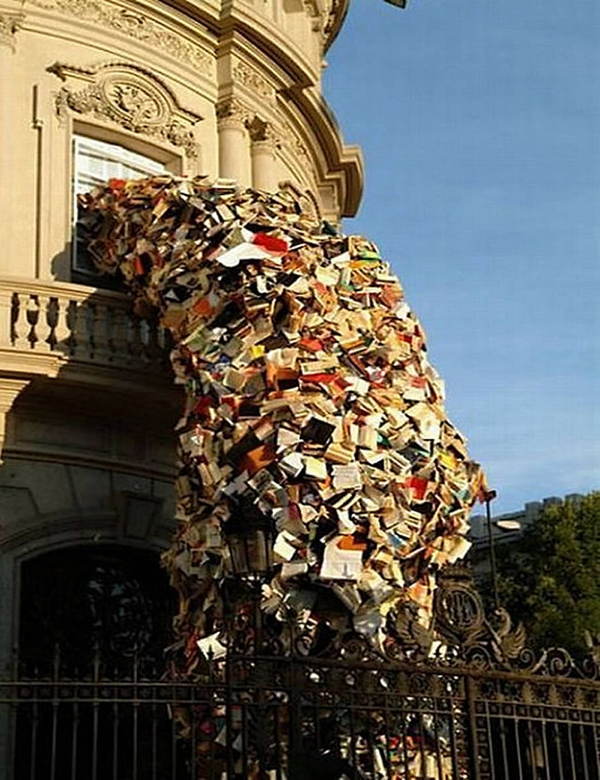 Alicia Martín’s Cascading Books, or Biografias, was an over the top, 5,000-book art installation featured in various locations across Spain and the Netherlands. A wire mesh frame gave the mass of unused volumes the illusion of being poured like a liquid. In 2012, she also created an upcycled book art installation in which hundreds of novels were shaped into a giant doughnut. Source: PXL Eyes 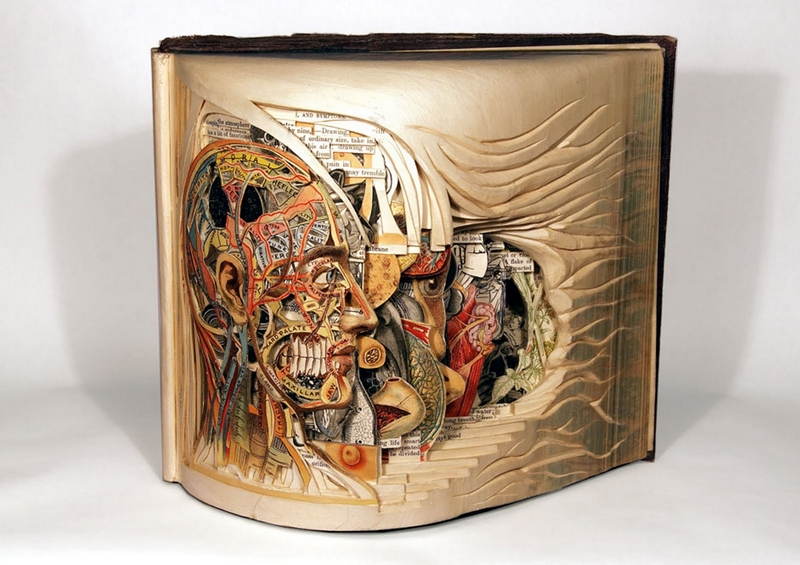 To say that New Yorker Brian Dettmer’s book autopsies are complex is a massive understatement, as the work here proves. What’s even more amazing is that he doesn’t plan ahead before he carves. To see a bit of his process, watch his profile on CBS News. Source: Blogspot 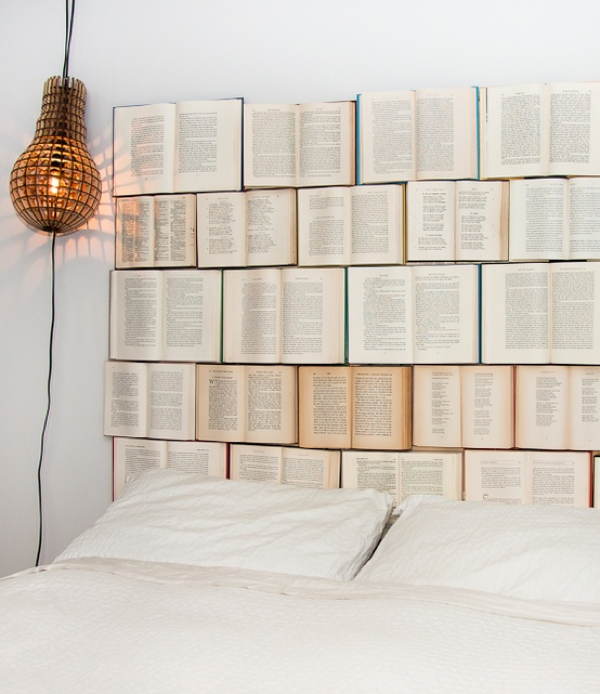 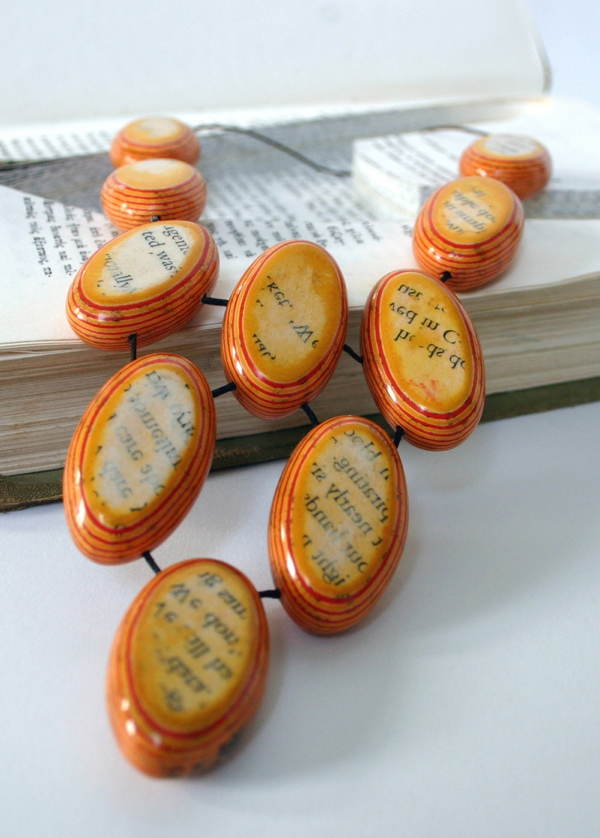 Jeremy May has created a unique and environmentally-friendly process of jewelry-making. Each piece consists of hundreds of book pages that are pressed together, laminated, and shaped. The book that gave its pages to create the ring, bracelet, or necklace then becomes a jewelry case; the carved-out space holds the piece perfectly. This necklace is named “O MΕΓΑΛΟΣ ΨΑΡΑΣ,” which, according to Lexilogos, is Greek for “The Big Fisherman.” Source: Little Fly 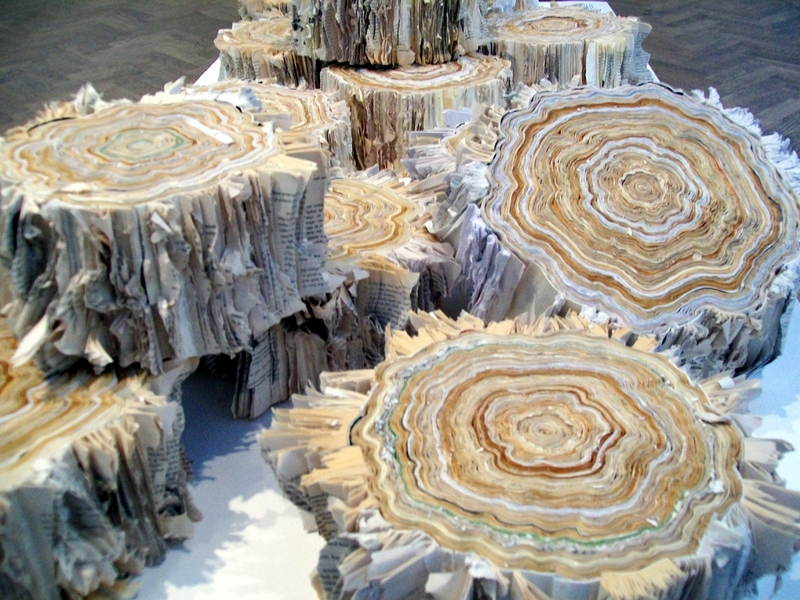 Made from old paperbacks, Julie Dodd’s art installation, Illegal Logging, was meant to call attention to how far the logging industry oversteps its boundaries and to the plight of old-growth trees that are in danger of being felled. Source: Seattle Pi. 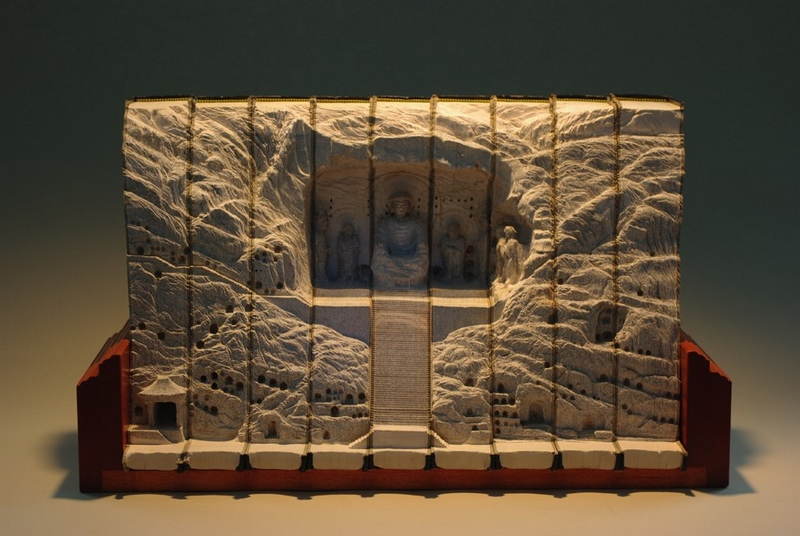 Guy Laramée carves landscapes and scenery into books, painstakingly shaping them to reflect actual artifacts and terrain, like China: this one, Longmen, is from his Great Wall series. Source: Guy Laramée 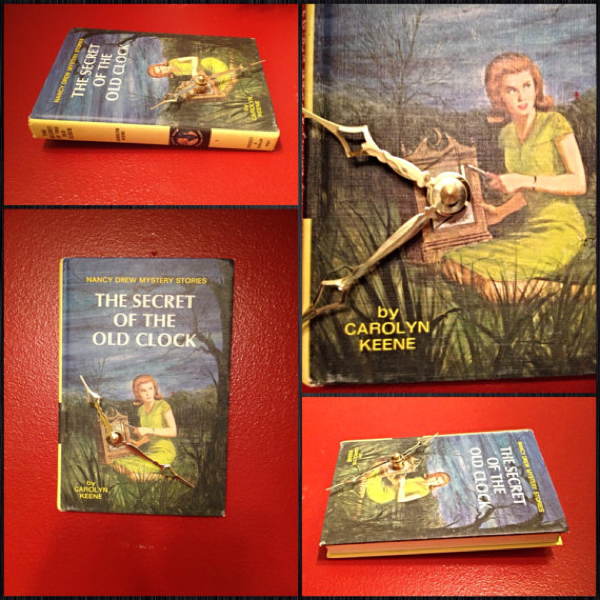 This adorable Nancy Drew clock is made from a real copy of The Secret of the Old Clock. Brandon Wiley of Wiley Designs stocks his Etsy shop full of a variety of books converted into clocks. Source: Etsy 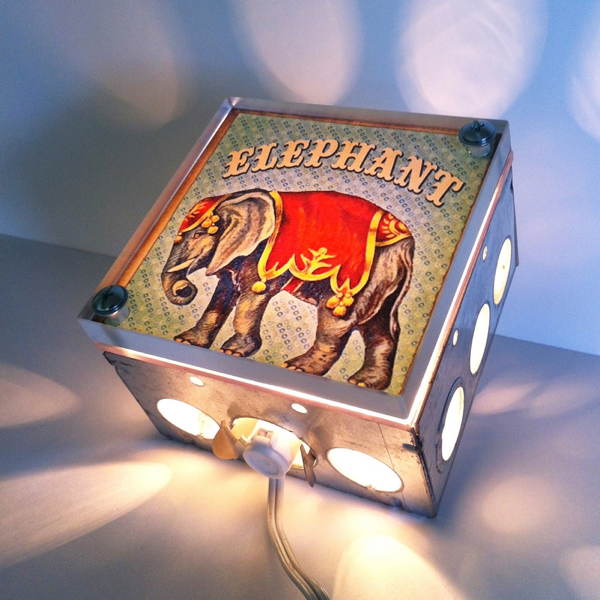 A circus elephant night light for a nursery or bedroom. Using a vintage dictionary print and a standard electrical box, The Rekindled Page in Savannah, Georgia created this delightful little lamp. Source: Etsy 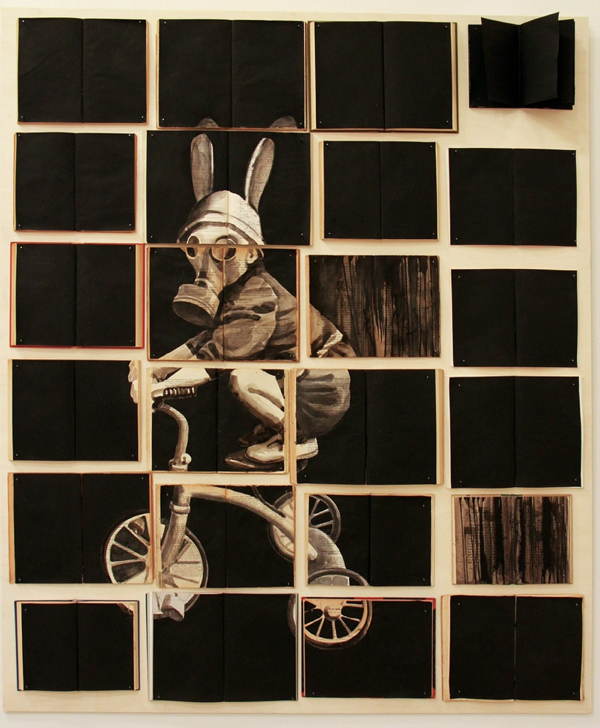 Russian-born artist Ekaterina Panikanova, who now splits her time between her hometown of St. Petersburg and Rome, created this work using vintage books, paint, and a visionary mind. This is just one piece from her stunning Errata collection, in which she approaches the books’ pages as part canvas, part mosaic. She uses open books to symbolize the human psyche, allowing her to search within herself, page by page. Source: Lamono Magazine 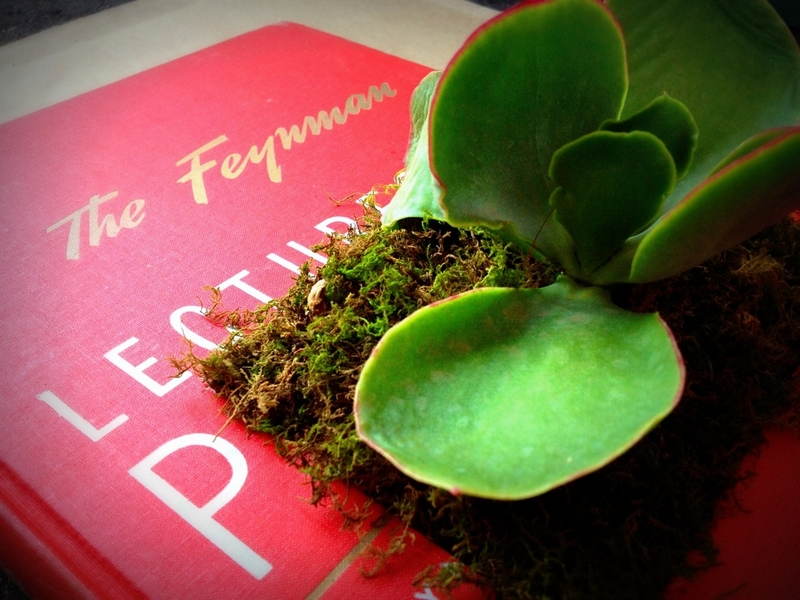 Sherri Green of The Library Laboratory in Ypsilanti, Michigan, turns old books into planters and sells them at local craft fairs. She has two day jobs, so the fact that she got some good press from the Huffington Post in December 2013, should be a big help in getting her business off the ground. She takes orders via her website. Source: The Library Laboratory 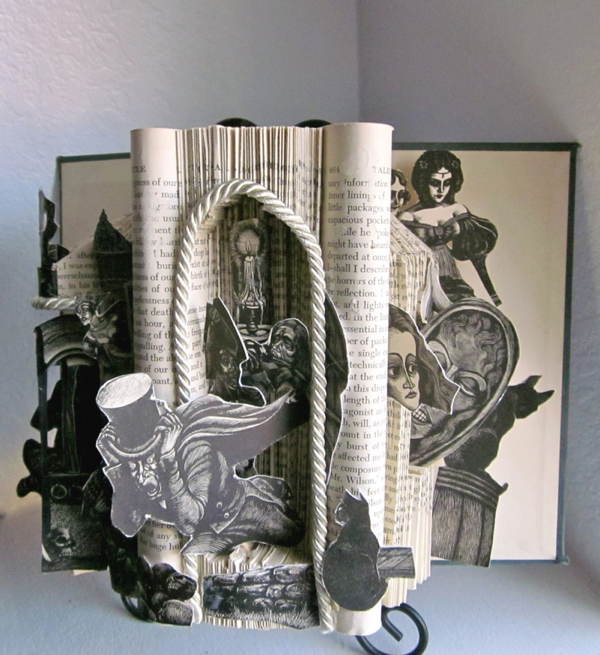 Susan Hoerth of The Abandoned Attic in McAllen, Texas, started with an old illustrated book of Edgar Allan Poe tales and came up with this macabre offering. Pictured here: “The Black Cat,” “The Gold-Bug,” a pile of plague-ridden skulls from “The Masque of the Red Death,” and many other bizarre characters and objects from his spooky and often grotesque stories. Source: Etsy 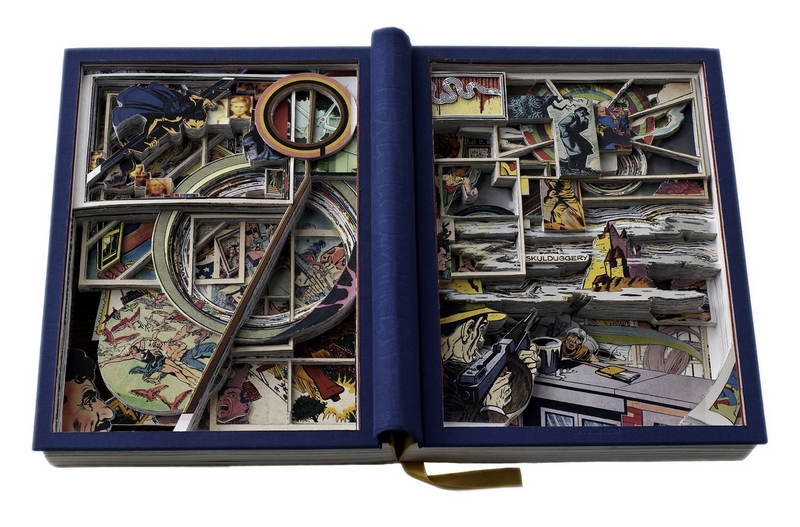 It’s about time we hit upon some graphic novels. James Allen of Seattle calls his work “excavations.” As he cuts, he reinterprets the book’s narrative by creating new scenes with its existing artwork. This piece is entitled Skulduggery after the only word Allen chose to unearth. Source: The Huffington Post. 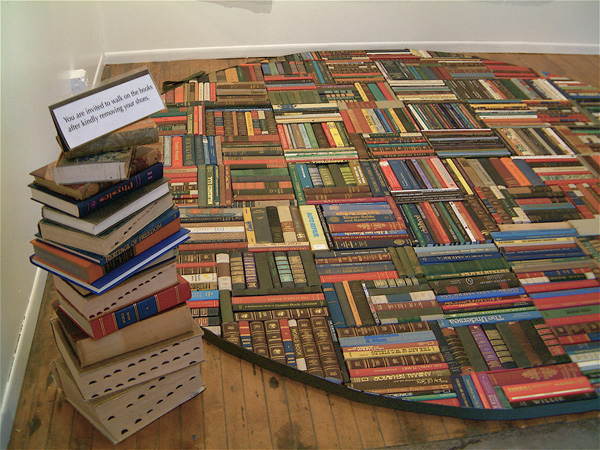 This may look like a cool floor mat, but it’s really too fragile for everyday use. For the art piece Bibliophilism, Pamela Paulsrud of Chicago, Illinois transformed leather book spines into a rug that would be quite at home in a dusty Victorian-era gentleman’s study. Can’t you just smell the pipe tobacco? Source: Pamela Paulsrud. 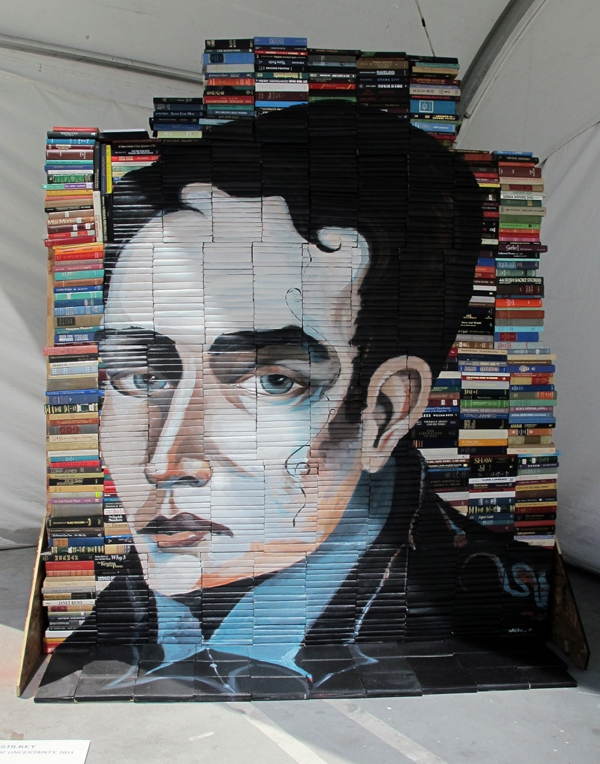 Los Angeles artist Mike Stilkey builds his canvases with stacks of books, then paints on their spines using a mix of ink, lacquer, paint, and colored pencil. His work mainly consists of portraits of pensive humans and anthropomorphic animals; this one is titled Times of Uncertainty. Source: LA I'm Yours 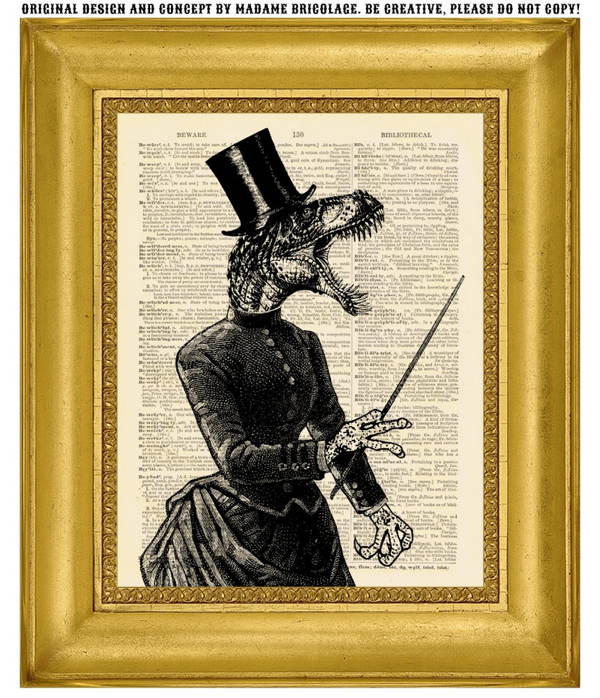 Madame TRex is an art print on an antique dictionary page by Madame Bricolage of Warsaw, Poland. Works like these are all the rage on Etsy.com (for the Etsy-uninitiated, it’s a website where artists and craftspeople sell their wares); many shops offer similar prints. Source: Etsy. 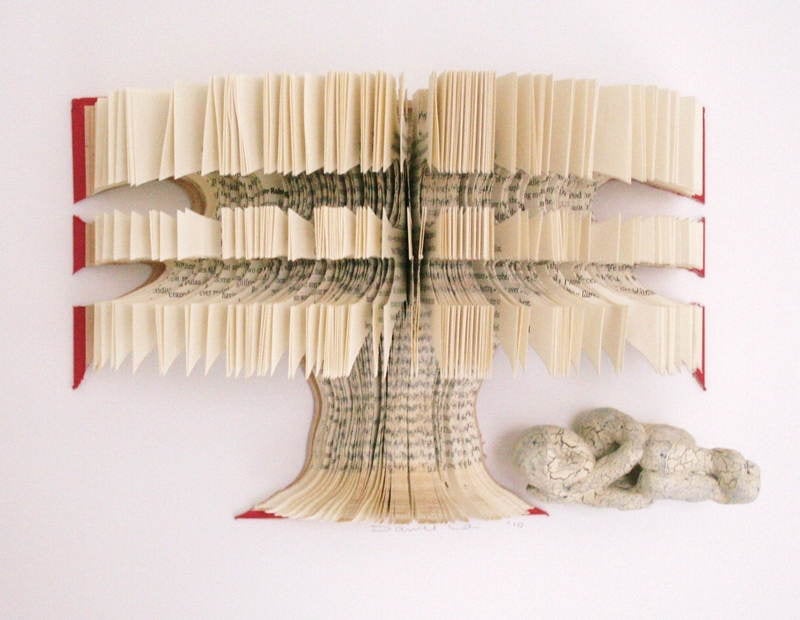 A little clay man sleeping under a book tree. This sculpture, one in a series, was created from books and clay by Daniel Lai, aka Kenjio, of Knoxville, TN. Source: Over Blog. 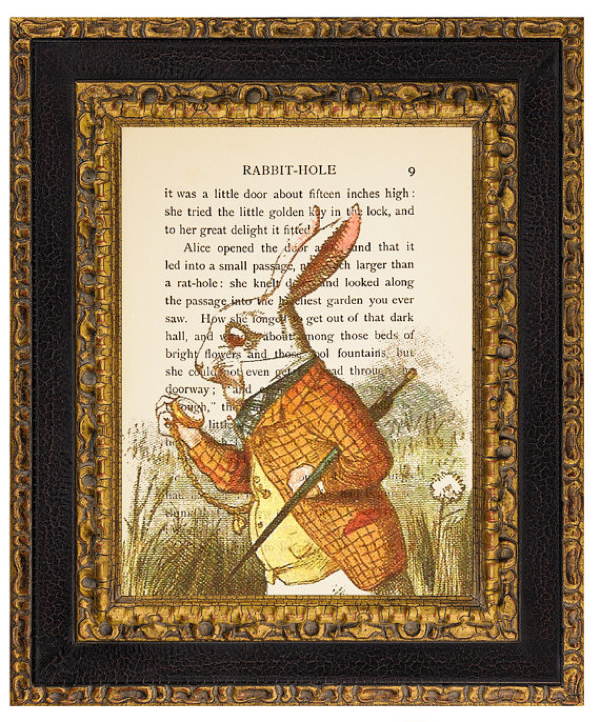 Janie Jones of Madame Treacle in London, UK, cut a page from a vintage copy of Alice in Wonderland and added this color print of the ever-nervous White Rabbit, who is obviously late for an important date. Source: Etsy 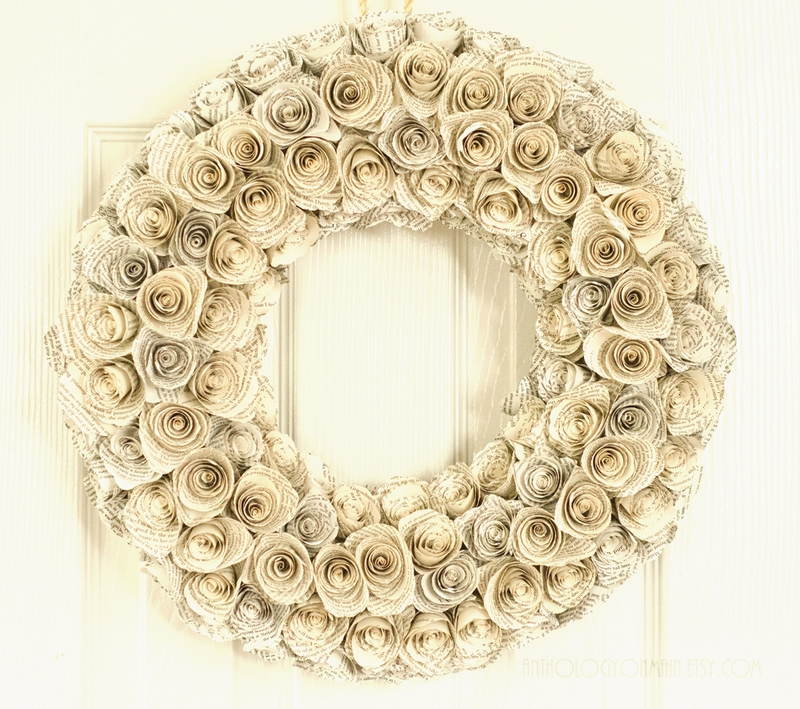 Paper flowers are certainly nothing new in the arts and crafts canon. But Katie Lloyd of Anthology on Main in Houston, Texas has taken the craft to a higher level in her variety of wreaths, bridal bouquets, and other gorgeousness folded from old book pages. The joy of catching the bouquet at a wedding fades over time as natural flowers wilt and die, but book-paper flowers can continue to display that joyful memory for many years. Similarly, this wreath can be stored and reused. Source: Green 4 U. 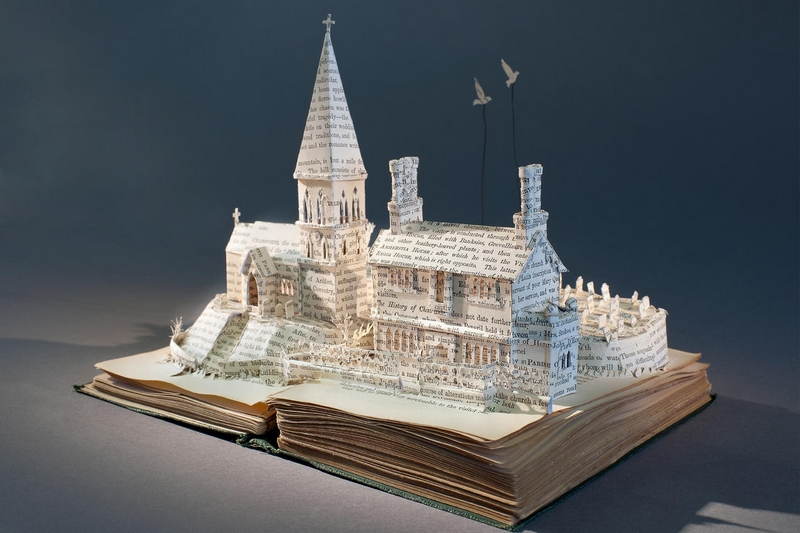 We’ve saved the best for last. This woman’s art may stop your breath as you scroll through her website’s gallery. Su Blackwell of London, UK, creates the inner world of a book, often famous novels or fairy tales, in intense three-dimensional detail. This work, A Guide to Edensor, Derbyshire, shows how intricate her art can be. Source: The Break's Over.