After the Chernobyl nuclear power plant suffered a meltdown in 1986, Soviet leader Boris Shcherbina found himself supervising the cleanup of one of modern history's worst catastrophes. 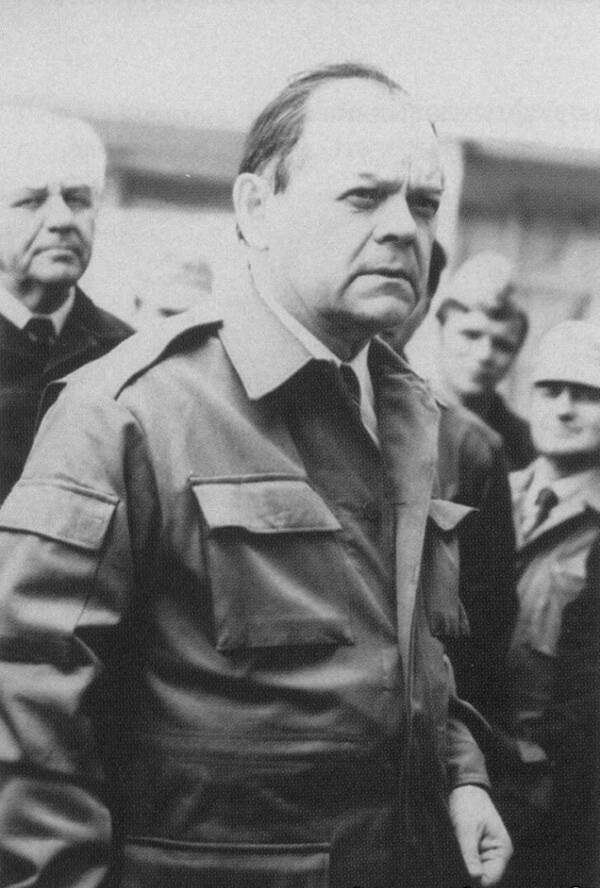 Wikimedia CommonsBoris Shcherbina was the one responsible for evacuating all residents of Pripyat in the wake of the Chernobyl disaster.

HBO’s five-part mini-series Chernobyl reminded millions of viewers just how cataclysmic the 1986 nuclear disaster was — and how much worse it could have been. And from start to finish, the show has receieved widespread praise for its accuracy.

However, all works of creative non-fiction inherently alter the factual truth of an event. Information needs to be presented under the constraints of time, tone, and pacing. Composite characters — which represent multiple real-life persons through one actor — are often constructed for convenience.

Though Chernobyl walks that line as impressively as any dramatized show based on real life, not everything was historically accurate.

In the case of Boris Shcherbina — the Deputy Prime Minister and Vice Chairman of the USSR’s Council of Ministers at the time of the disaster — the veil of secrecy and lack of information endemic to Cold War-era Soviet Union has made the authenticity of his portrayal on the show largely unknowable.

The official trailer for HBO’s Chernobyl.

Nevertheless, we do know that Boris Shcherbina aided the effort to save countless lives in the aftermath of the historic meltdown. The rest of his story, however, remains a little more complicated.

In the second episode of the HBO series, Boris Shcherbina (portrayed by Stellan Skarsgård) and Valery Legasov — a physicist and member of the Academy of Sciences portrayed by Jared Harris — are en route to Chernobyl via helicopter. When the scientist hesitates to explain how a nuclear reactor works, he’s threatened with execution.

According to The New Yorker, however, this was a fabricated construct merely employed to engage viewers. Executions on the spot — even delayed ones that followed the protocols of the Soviet regime’s bureaucratic hierarchy — were simply not accepted anymore by the late 1980s.

The real-life Shcherbina never considered throwing Legasov out of a helicopter because it wouldn’t be prudent for the mission at hand, not to mention the fact that it would have been murder.

According to Bustle, Premier Nikolai Tikhonov made Shcherbina Deputy Prime Minister in 1984. His previous roles were Minister for Oil and Gas Construction and overseeing the Urengoy-Pomary-Uzhhorod (or Trans-Siberian) pipeline project.

Shcherbina was in the middle of a business trip in Siberia when he got the fateful call about the disaster in the early morning hours of April 26, 1986. He arrived at Pripyat around 18 hours after the reactor exploded — and finally ordered the town’s evacuation. 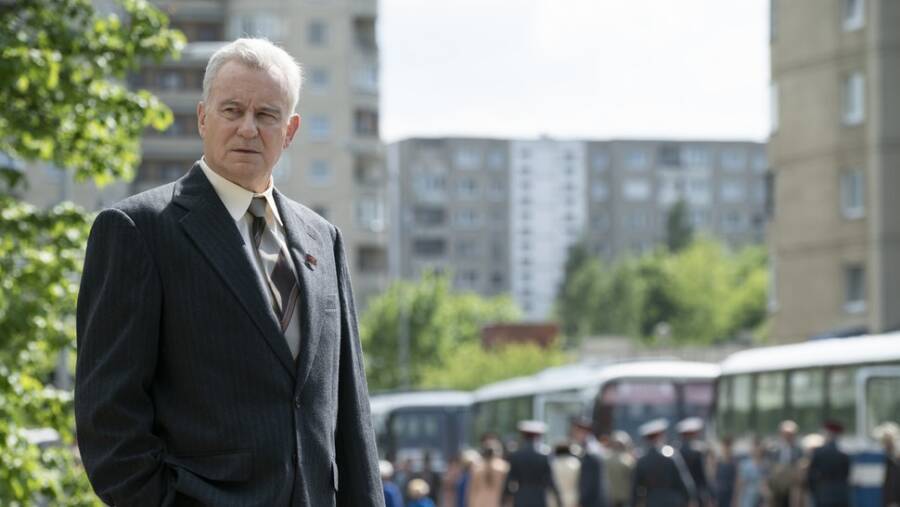 The HBO show, however, portrays Shcherbina as a cold Soviet bureaucrat who, at least in the first few hours, prioritizes his role in government before the potential damage to others. The character isn’t too eager to jeopardize his title by believing the facts given to him by his underlings.

For Skarsgård as an actor, portraying Shcherbina as someone initially involved in the Soviet coverup effort — and then depicting his arc toward moral redemption — was the most important facet of the role.

“It’s interesting to play a character who is representative of a faulty system, and has spent his life defending it, and then has to look back at his life and admit that he’s been wrong,” said Skarsgård. “Finally, he comes to the conclusion that he has to stand up for something else.” 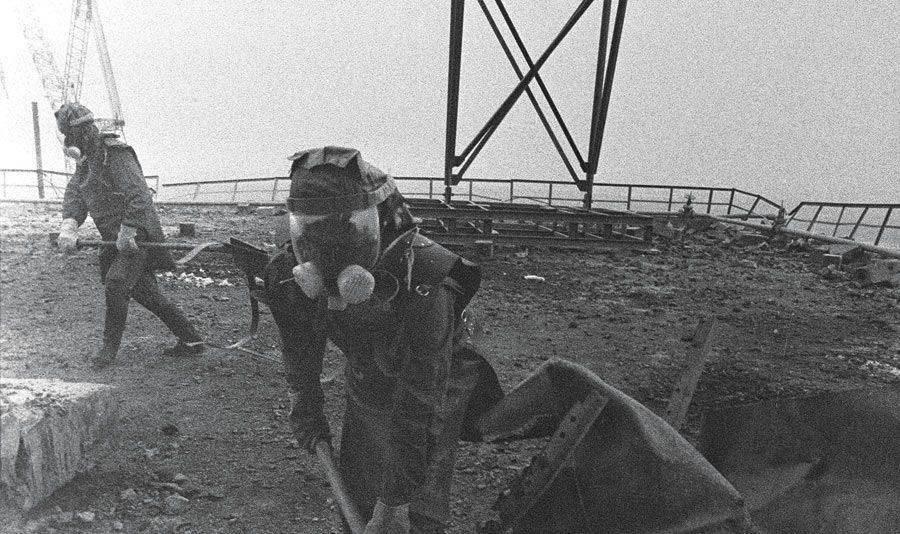 On the other hand, many actors find an inherent responsibility to accuracy when depicting a real-life figure — particularly one so historically significant. A lack of access regarding Shcherbina’s life, combined with prioritizing the script above all else, however, allowed Skarsgård a certain amount of freedom in his portrayal.

“The real man is different from the man that I’m playing,” he said. “The real man is very hard to get any information about. I play the character of the script, and the script and the story need some things from this character, whether that was the way he was or wasn’t.”

“I don’t even look like the original character, Boris Shcherbina.”

The True Story Of Boris Shcherbina

Verifiable information on many Soviet political figures is hard to come by. In the case of Boris Shcherbina, for instance, most of what is known about the man is tied directly to the Chernobyl nuclear disaster — simply because it was the world’s biggest story at the time.

The Great Soviet Encyclopedia, however, contains a concise overview of the man’s early life and career in government. Sherbina was born the son of a railroad worker in the city of Debal’tsevo, Donetsk Oblast, Ukrainian SSR on October 5, 1919.

He graduated from the Kharkov Institute of Railroad Transport Engineers at 23, and from the party school of the Central Committee of the Communist Party of Ukraine in 1948. By 1950, he made secretary of the city committee of Kharkov.

SHONE/GAMMA/Gamma-Rapho/Getty ImagesView of the Chernobyl nuclear power plant after the explosion. April 26, 1986.

Across his impressive career, Shcherbina was awarded two Orders of Lenin, the Order of the October Revolution, and received numerous medals for his patriotic duty to the USSR.

In 1984, he was anointed Deputy Prime Minister by Premier Nikolai Tikhonov. Two years later, he’d find himself enveloped in the largest nuclear disaster in history.

By the time Boris Shcherbina arrived at the scene, the exposed reactor had been spewing plumes of radioactive material for more than 18 hours.

Though there’d finally been an agreed-upon assessment of what had occurred, the fear of making things even worse or stepping on the toes of superiors had allowed things to go on for nearly an entire day. It didn’t take long for evidence to waft across the continent and reach Germany and Sweden.

According to History, Shcherbina wanted to use water to extinguish the fire. When scientists explained that water could actually make a nuclear fire worse, sand and boron were suggested as alternatives. 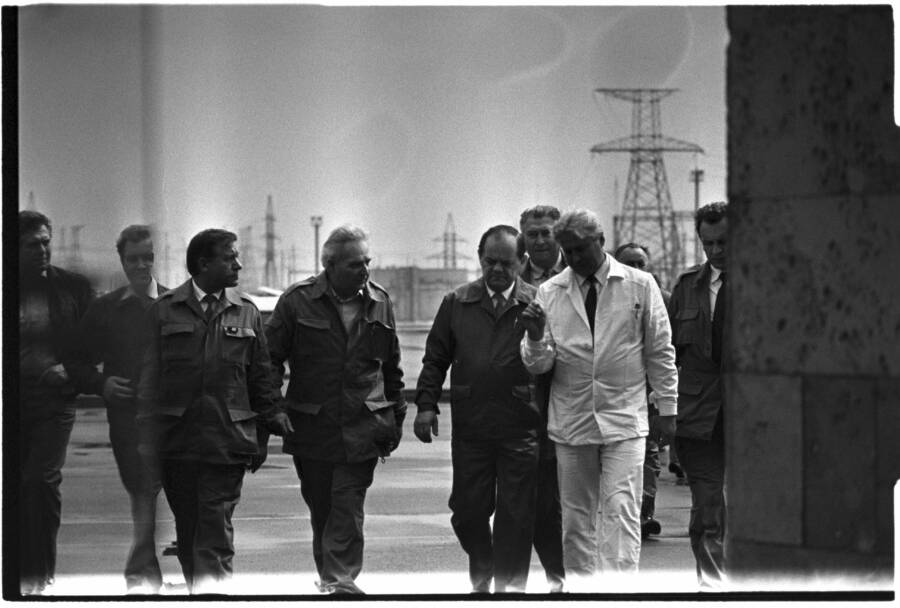 Igor Kostin/Sygma/Getty ImagesBoris Shcherbina (third from the right) visits Chernobyl with a government commission to look at the sarcophagus. Nov. 30, 1986.

By all accounts, HBO’s Chernobyl got this fundamental fact right. Whether Legasov himself uttered the solution in the manner he did in the series is unclear, though the underlying truth was certainly presented adequately.

Convincing Shcherbina to evacuate Pripyat, too, was largely portrayed accurately. It was nearly midnight on April 26 when scientists succeeded in doing so.

“They told one [party] secretary, and he said: ‘I can’t give you my agreement to this,’” a participant in the meeting later recalled. “They got through to another who also expressed sympathy but said that he could not give his assent.”

“Sherbina called me on Saturday evening,” Ryzhkov recalled, “and reported on the situation. ‘We’ve measured the radiation…Pripyat has to be evacuated. Immediately. The station is close by, and it’s emitting radioactive contagion. And people in the city are living it up full blast; weddings are going on.’”

It was this call that led Ryzhkov to order the following day’s evacuation via trains and buses. Local officials received Shcherbina’s go-ahead around 1 a.m. on April 27 to prepare lists of citizens to properly execute the protocol. They had two hours to do the job.

The HBO series doesn’t waste any running time to include all of this minutia but arguably depicts the struggle to convince superiors and organize resolutions better by focusing on character rather than plot. By 4.30 p.m., the evacuation was complete. 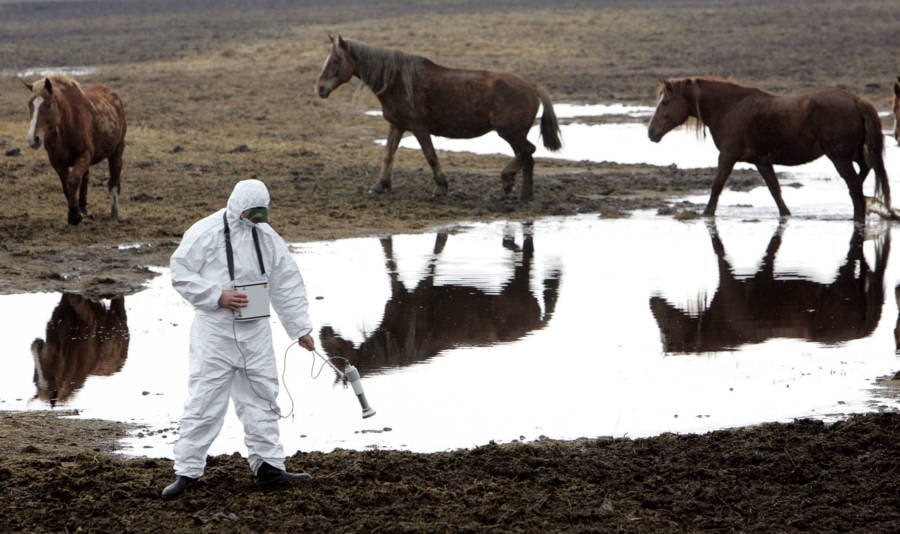 VIKTOR DRACHEV/AFP/Getty ImagesWild horses walk the fields as a worker of the Belarussian radiation ecology reserve measures the level of radiation inside the exclusion zone.

“Shcherbina called me at lunchtime on Sunday,” Ryzhkov recalled. He told him: “There are no more people left in Pripyat. There are only dogs running around.”

The fact that the Soviets organized squads of men to kill these animals, too, was accurately included in the mini-series. Nonetheless, to this day, the wildlife in the Chernobyl Exclusion Zone thrives and adapts to its unnatural ecosystem.

In the end, the mini-series has done a tremendous job of depicting what went on in Pripyat in 1986. From the minute-by-minute portrayal of scientists inside the plant to the Soviet hierarchies of responsibility and blind loyalty to the steps undertaken by figures like Legasov and Shcherbina.

Boris Shcherbina died in Moscow on Aug. 22, 1990. His eventual pushback against coverup attempts was a priceless contribution to resolving the nuclear disaster — which could have been far more destructive than it already was.

After learning about the real-life Boris Shcherbina and his depiction in HBO’s Chernobyl, take a look at 37 photos of Chernobyl today, after being frozen in time by a nuclear meltdown. Then, learn about Anatoly Dyatlov, the man behind the Chernobyl meltdown.