The failed rescue was "one of the saddest days I have lived in the ocean," said the photographer who snapped a haunting photograph of the maimed whale. 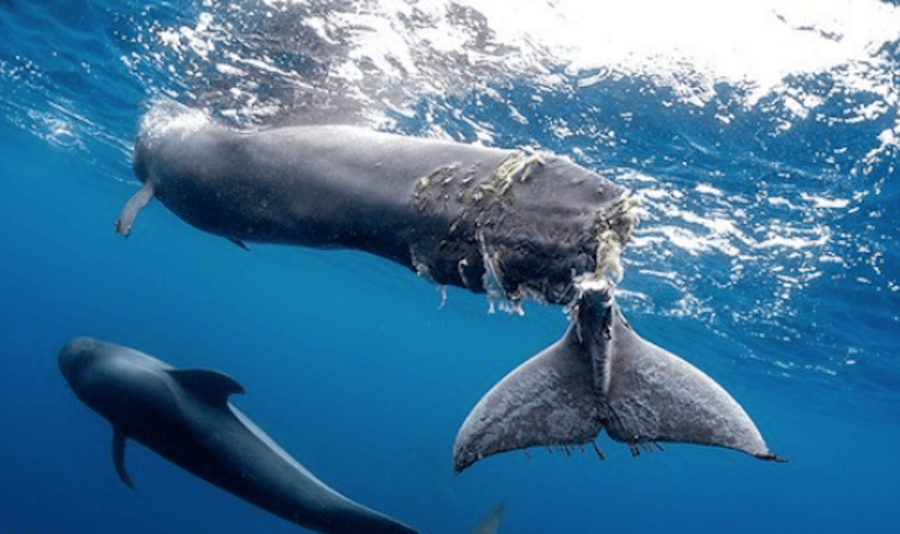 Francis Pérez/InstagramA baby pilot whale shrieks in pain after its tail was almost cut off completely by a boat propeller.

There will be no end to the suffering of marine animals at the hands of humans until we are mobilized to enact real change. That is the message National Geographic photographer and marine activist Cristina Mittermeier hoped to convey with this disturbing photo she posted online:

Above you can see a young pilot whale swimming in the water with a near-completely severed tail.

As reported by Newsweek, the animal sustained the horrifying tail injury⁠ from what responders believed to be the razor-sharp propeller of a boat. Mittermeier said that the baby whale had let out “shrilling calls of pain” and struggled to swim.

The disturbing image was taken in the coastal waters of Tenerife Island, the largest of Spain’s Canary Islands. The original photographer who took the shot, Francis Pérez, was called on to the scene by concerned onlookers along with a marine biologist and wildlife veterinarian. Unfortunately, after close examination of the almost-severed fin, the veterinarian ruled that there was nothing they could do for the animal, except release it from its pain.

The group lifted the injured whale out of the water and euthanized it.

Pérez, who first posted the haunting underwater photograph in April, described the failed rescue as “one of the saddest days I have lived in the ocean.”

“Sparing more unnecessary suffering to an animal with no chance of recovery was what they had to do,” Mittermeier said empathetically of the call to euthanize the juvenile.

She added: “What the rest of us need to do is to become more engaged. Enforcing regulations on vessel speed limits is very difficult but it all begins with awareness and public pressure; the kind that demands that the voices of thousands of people are heard.”

Mittermeier’s frustration with the ongoing suffering of wildlife due to human negligence has led her to become co-founder of Sea Legacy, a collective of wildlife filmmakers, photographers, and storytellers working to mobilize others globally through their work to protect the environment.

Now, the creative-activist group is working to push legislation that would prevent more horrific boat accidents with whales and other marine animals from happening.

The World Wildlife Fund (WWF) cites boat accidents as one of the leading causes of injuries and deaths among whales in the ocean. Between 1992 and 2013, water traffic related to cargo shipping increased 300 percent and has consistently increased by a three percent rate per year. In 2019, that number has likely risen.

A spokesperson for Sea Legacy described a slow and painful death for most animals injured in these collisions. 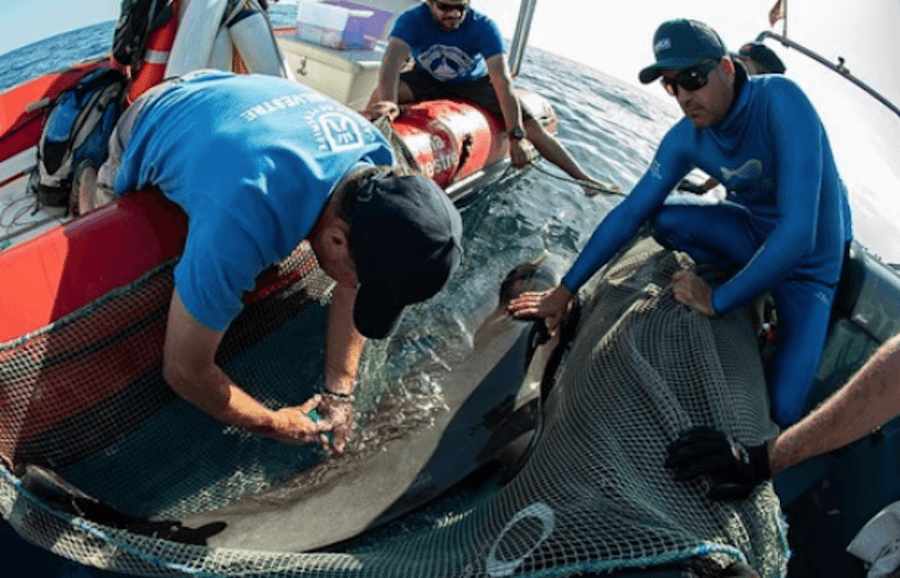 Francis Pérez/InstagramRescuers are forced to euthanize the baby whale because the injury is too severe. Boating accidents are the leading cause of injury and death among whales.

“After being hit by a vessel, most cetaceans sink and never surface. They are not killed immediately, but rather sustain fatal injuries that prevent them from feeding, swimming or breathing. They die slowly,” the spokesperson told Newsweek. “[Pérez’s] picture shows us what we often hear about but can’t see. The impact of ships on whales is real, and it’s devastating.”

Whales also need to surface routinely for air which can land them face-to-face with a moving vehicle without warning. Still, as human beings continue to encroach on the natural habitats of wildlife, the onus is on us to make sure these tragedies don’t continue to happen.

Just recently, the environmental management branch of the city of Cape Town recovered the carcass of a 10-foot humpback whale that had been sliced in half by a large ship.

And while it is impossible to establish just how frequently these accidents regularly occur, given the harm and death it can cause to these animals, even once is already too often.

The good news is that conservation efforts have continued to see growing support.

For example, conservationists in Washington state are pushing for a new bill that would extend the current viewing distance for whale watching, a popular tourist activity around the San Juan Islands, from 300 yards to 650 yards. The proposed bill would allow local orcas to feed peacefully in the waters without interference from humans.

But the easiest thing people can do when they are operating heavy boats in the water is to be mindful of the area’s wildlife, so keeping a safe distance during activities such as whale watching is important. Another simple yet effective way to reduce the likelihood of hurting sea animals is to reduce one’s boat speed.

“The most immediate thing we can do to minimize this is slow down,” a Sea Legacy spokesperson said.

Next, read the story of an endangered sei whale that was put down after it was beached with a plastic bag in its throat. Then, learn about killer whale “Lulu,” who was one of the most polluted animals on the planet before she died.