In one recent case, a father who raped his underage daughter was allowed to walk free even though the sex was proven to be non-consensual because prosecutors couldn't prove that she sufficiently fought back. 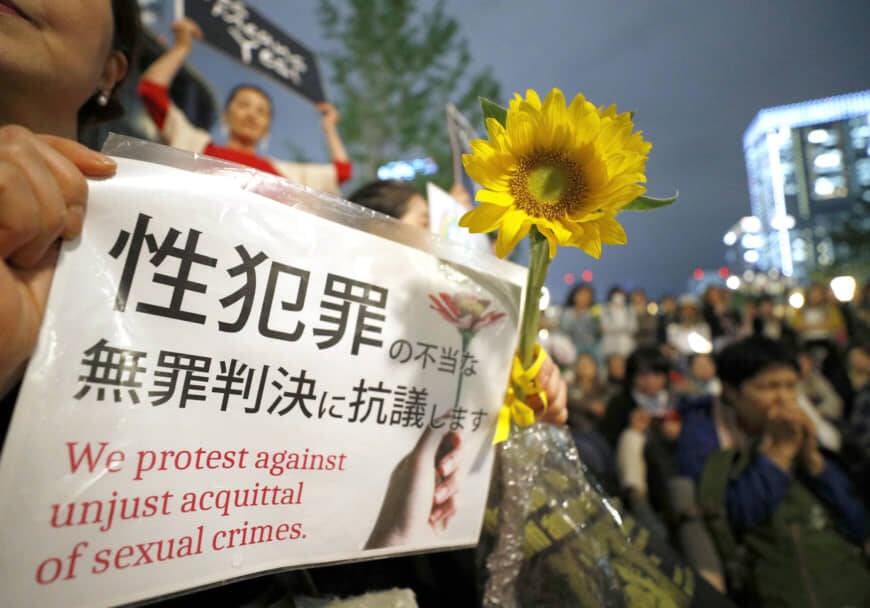 KYODOProtestors have selected flowers as their symbol during these public demonstrations against rape acquittals.

When Japan amended its century-old rape law in 2017, it included more stringent penalties for perpetrators. Unfortunately, the revisions retained confounding requirements for prosecutors that demand they prove violence or intimidation was used before the act.

In other words, rape victims need to prove they were “incapable of resistance.”

According to Reuters, this legislative barrier to justice has sparked protests in recent weeks following numerous acquittals that have left many citizens outraged.

Not only do Japan’s laws let rapists walk free, they deter countless victims from even coming forward by neglecting their viewpoint.

“Discussing sexual violence from the victim’s viewpoint is a world trend, and it’s time to reform the Japanese legal system and society that cannot do that,” said Minori Kitahara, an activist and author who’s taken it upon herself to organize demonstrations against this string of recent rulings that have left victims without justice because prosecutors couldn’t prove that the victim fought back.

Few people fully understand the absurdity of such legal requirements like Myako Shirakawa, who was 19 years old when an older man raped her. A young, optimistic college student, her life changed within minutes of the attack. She said her mind went blank, and her body froze in shock.

“When I became aware, he was on top of me,” the now-54-year-old psychiatrist for sexual abuse victims explained.

Shirakawa said her actions were part of “a common, instinctive reaction — it’s a form of psychological self-protection” during these tragic, all-too-common scenarios.

The day she was raped was also the day she got pregnant. Traumatized, she actively avoided reporting the incident to police and aborted her unborn child.

There are masses of similarly silent victims like this across Japan, which Shirakawa described as having a preposterous burden of proof in such cases. The activist and other critics of these unfair laws demand further amendments similar to those in Canada, Britain, and Germany. 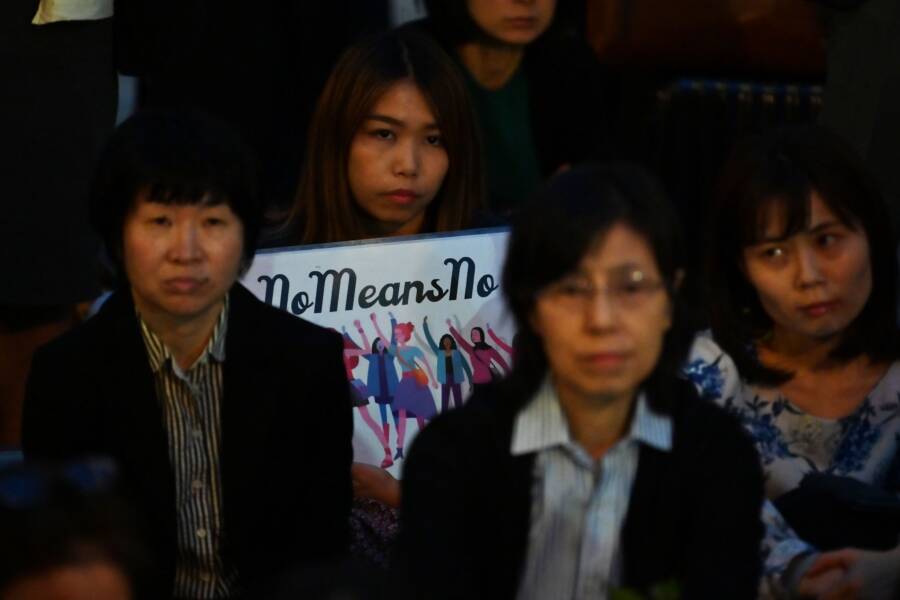 The recent string of injustices and astonishing acquittals have only emboldened these activists to voice their beliefs even louder. In March, for instance, a Nagoya court let a father who raped his 19-year-old daughter walk free.

While the documented verdict recognized that the sex was non-consensual — and that the father physically and sexually abused his daughter when she was even younger — the court wasn’t sure whether or not the girl had opportunities to remove herself from the scene.

Stunningly, the very definition of “rape” seems to exclude a lack of agency, under Japanese law.

“The verdict was extremely strict about proving psychological incapacity to resist,” said Tomoko Murata, a lawyer who mainly works on sexual assault cases such as these.

At the very least, the Nagoya case is under appeal. Fortunately, though, activists have had enough — and aren’t stopping their monthly demonstrations anytime soon. Their symbol is elegant and simple: Each protestor holds flowers in their hands, as a sign of grace, solidarity, and resilience. 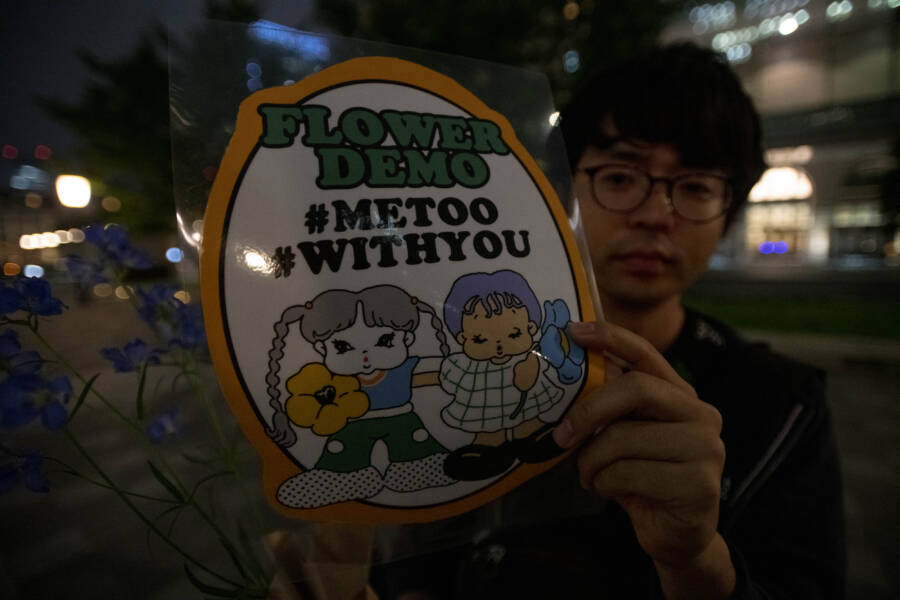 But still, only 2.8 percent of sexual assault victims in Japan report their attacks to the police. The hesitance here sadly stems from a patriarchal culture that has instilled the fear of shame and public humiliation in the victim.

Experts on the matter explained that, beyond the legal hurdles, traditional Japanese culture holds women responsible for protecting their own chastity. What’s more, these same rape laws in question were passed before Japanese women even had the right to vote.

“The idea is women must resist to the very limit,” said Murata. “That is at the heart of this kind of ruling. And there is still the view that ‘No means Yes.’ It is not yet the common view that a woman’s agreement is necessary before having sex.”

The government’s gender equality bureau showed that almost 60 percent of female victims never told a single person at all. That was in 2017.

“My patients are afraid, and there are many who feel it is impossible to make a legal case, so all they can do is cry themselves to sleep,” said Shirakawa. 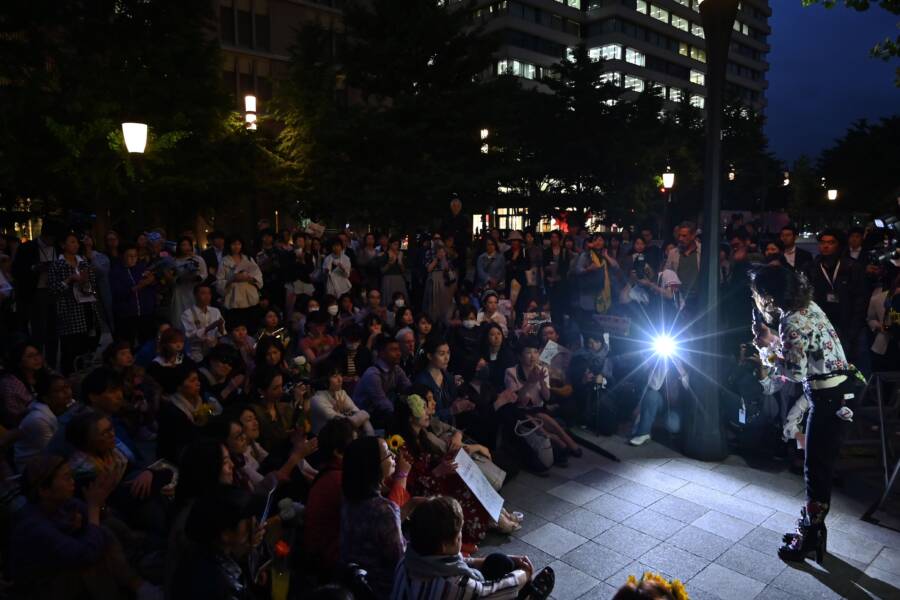 CHARLY TRIBALLEAU/AFP/Getty ImagesWhile one of these controversial cases had the court recognize the sex was non-consensual, there was a debate around whether or not the victim couldn’t simply have removed herself from the situation. The rapist — her father — walked free. Tokyo, Japan. June 11, 2019.

“In dealing with police, prosecutors and courts, the law is so strict and a guilty verdict so difficult that the victim begins to suffer,” said Murata. “The repercussions of such verdicts are huge.”

On a more positive note, the Spring group of sexual assault victims handed its demands for legal revisions to the justice ministry and Supreme Court in May.

At long last, there’s a swell of demonstrations against these laws. Finally, it isn’t just protestors making themselves visible in the street — but the media and citizens spreading the word, as well.

“The media are reporting about the verdicts and the protests,” said Jun Yamamoto, head of the Spring group and a victim herself. “The increase in the number of people who think that this situation is wrong will give strength to those who cannot speak of their own suffering.”

For 29-year-old Chihiro Ito — a member of Spring and victim of attempted rape — the recent verdicts acquitting clear perpetrators were literally incredible.

“I felt that the verdicts were unbelievable, impossible,” said Ito. “But there are also positive aspects for Spring. The view of ordinary people, the decent reaction that in common sense terms, these verdicts are wrong is spreading in society.”

“It would be good if that triggers debate in society and leads to reform.”

After learning about Japan’s antiquated rape laws sparking protests and public outrage, read about the woman sentenced to 10 years in prison for filing a false rape claim. Then, learn about the 15-year-old rape victim who was immediately raped again by the passerby she begged for help.