For decades, we've all been using a map that simply isn't accurate and instead reinforces colonial biases. 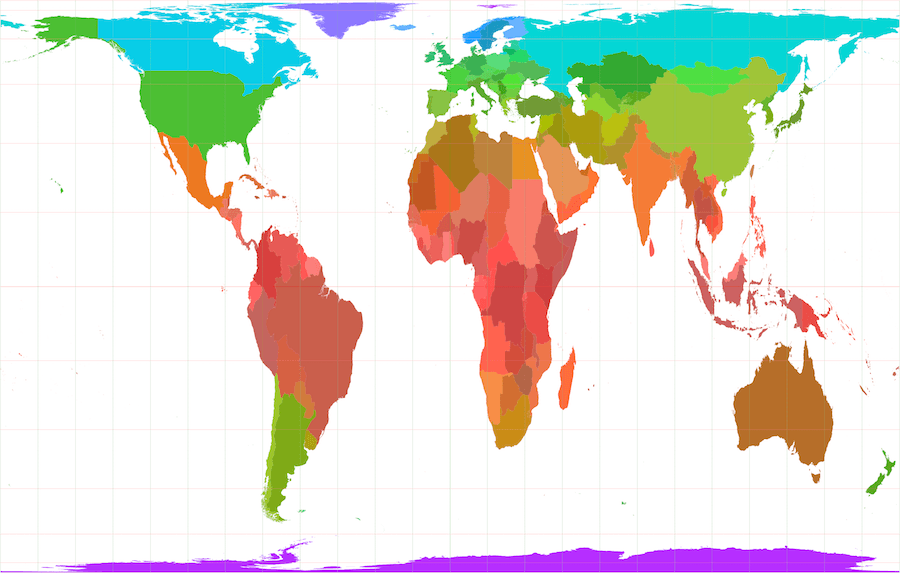 Boston Public Schools (BPS) became the first school district in America to trade out the distorted Mercator Projection map for the far more realistic Gall-Peters Projection map this past Thursday.

“This is the start of a three-year effort to decolonize the curriculum in our public schools,” Colin Rose, assistant superintendent of opportunity and achievement gaps at BPS, told the Guardian. Rose added that the public was not allowed to weigh in on the decision.

Despite its widespread use in the U.S., the Mercator Projection has been criticized for promoting a colonial mindset about the world. The map emphasizes primarily white areas, namely Europe and the U.S., and skews the representations of other landmasses unrealistically.

Africa and South America, for instance, are actually much larger than their depictions on the Mercator map. In reality, they dwarf the U.S., Greenland, and Europe, which are actually smaller than their distortedly large representations on said map.

According to Rose, BPS — which teaches 57,000 students, roughly 86 percent of them non-white — plans to follow suit in other areas of the school curriculum in the near future, deliberately stepping away from teaching history from a white perspective.

Students were apparently astonished when they saw the new map, remarking on the stark contrast between the Galls-Peter and Mercator map when put side-by-side.

“[It was] interesting to watch the students saying ‘Wow’ and ‘No, really? Look at Africa, it’s bigger,'” Natacha Scott, director of history and social studies at BPS, told the Guardian. “Some of their reactions were quite funny, but it was also amazingly interesting to see them questioning what they thought they knew.”

The Gall-Peters map was the source of significant controversy when its modern creator, German historian Arno Peters, antagonized the cartography community in the 1970s and 1980s for refusing to let go of the Mercator projection.

The discourse surrounding the two projections back then mimics the conversation around it today.

“The Mercator projection showed the spread and power of Christianity and is standard,” said race relations lecturer Jane Elliott. “But it is not the real world at all. What the Boston public schools are doing is extremely important and should be adopted across the whole of the US and beyond. This is going to change how kids see the world much for the better.”

Next, check out this more accurate world map that won a prestigious design award, before finding out what maps get wrong about the world — and how it happened.