Inside The Mysterious Disappearance Of Brandon Lawson, Who Vanished From A Highway In Texas

After Brandon Lawson ran out of gas in the dead of night on rural Route 277, he made a series of strange phone calls — and was never seen again. 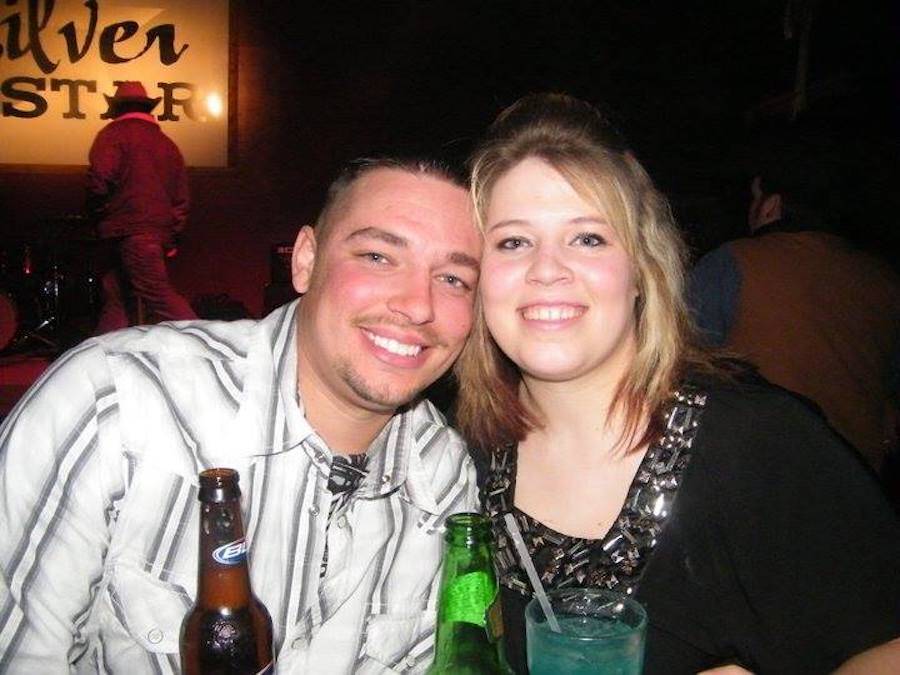 When Brandon Lawson vanished in 2013, it left authorities baffled and his family in shambles. The series of events leading to his disappearance near Bronte, Texas, appeared wholly contradictory. He was a loving father of four, but he stormed out of his house in a rage on the night of Aug. 8, 2013. An hour later, he called police when he ran out of gas — but hid from them when they arrived.

“Yes, I’m in the middle of a field,” Lawson told an emergency operator, according to NBC 5 Dallas-Fort Worth. “My truck ran out of gas. There’s one car here. The guy’s chasing [inaudible] to the woods. Please hurry! We’re not talking to him… I told you I ran into ’em.”

In addition to the police, Lawson also called his brother Kyle to ask him to bring some gas. When Kyle arrived just after 1 a.m. on Aug. 9, however, Lawson was nowhere to be found. And no one has seen him since.

The Disappearance Of Brandon Lawson

Born on Nov. 18, 1986, in Fort Worth, Texas, to Bradley and Kimberly Lawson, Brandon Lawson grew up in a big family and appeared to have a happy childhood. He spent a lot of time outdoors with his brothers Kyle and Billy and sister Brittany. He enjoyed fishing and camping, and he couldn’t wait to get his own pickup truck.

Lawson was a junior in high school when he met sophomore Ladessa Lofton and asked her for her number. The couple became inseparable, and they went on to have three children together. Lofton also became a stepmother to Lawson’s child from a previous relationship. They had been together for 10 years when Lawson disappeared.

Just before his disappearance, with the stress of working more than 60 hours per week in the oil fields and a newborn son at home, Lawson turned to methamphetamine. According to an interview with Lawson’s brother Kyle on the Crawlspace podcast, Lawson called Kyle on Aug. 7, 2013 to see if he knew where to find the drug.

Lawson did not go home to his family that evening, prompting a fight with Lofton when he did return to their San Angelo, Texas, home on Aug. 8. After their fight, he left angrily in his truck just before midnight. 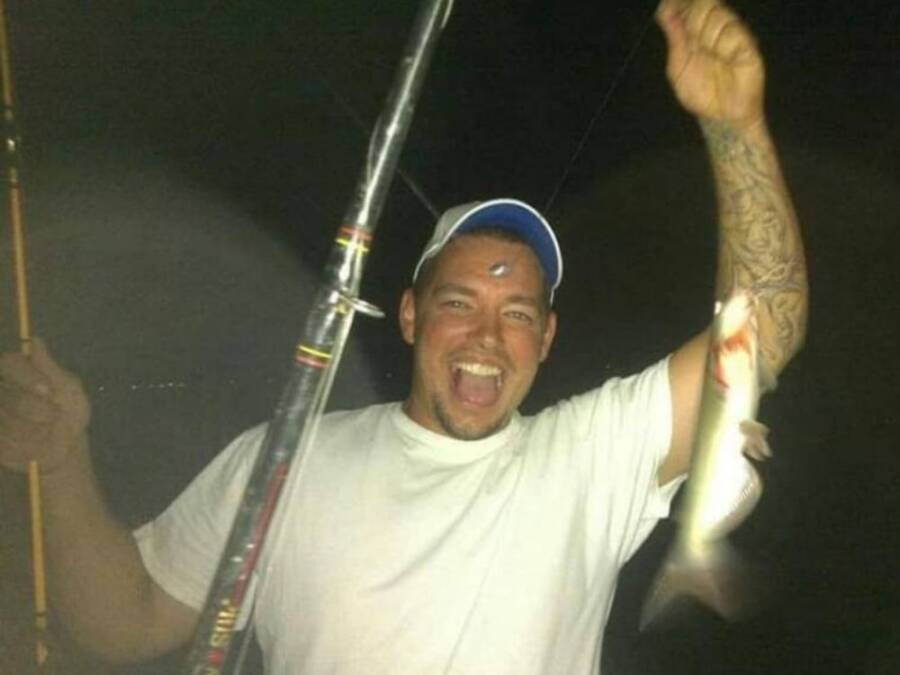 “When he left, I guess he didn’t have a lot of gas,” Lofton said. “I called my brother-in-law to tell him [Lawson] was going to run out of gas and put the gas tin on the porch to give to him so he could go get him gas, because he was pretty mad at me at the time.”

Lawson had called his father at 11:30 p.m. to explain he was driving to his home in Crowley, Texas. Lawson never finished the three-hour drive, however, as he ran out of gas on Route 277 at 12:30 a.m. on Aug. 9. He called his brother Kyle in a panic, causing Kyle to worry that Lawson was high and hallucinating.

“Three (expletives) are chasing me out of town,” said Lawson, going on to clarify he was talking about “the Mexicans in the neighborhood.”

Lawson denied being high when his brother asked him. With his wife and four-year-old son in tow, Kyle left his house and drove to Lawson’s to retrieve the gas can Lofton had left on the porch.

The brothers exchanged several more phone calls, with Lawson often hanging up after just a few sentences. At one point Lawson told Kyle that he was bleeding. In the meantime, according to Oxygen, Lawson called 911 around 12:50 a.m. and told the dispatcher that he wasn’t alone — and he needed the police.

Is Brandon Lawson Missing Due To Foul Play? 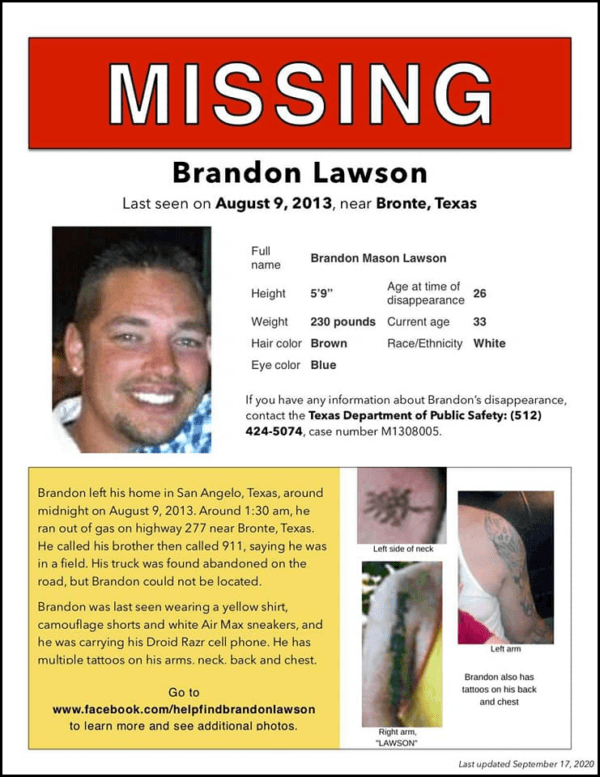 When a passing trucker saw the tail end of Lawson’s parked truck hanging over the white line of the road at 12:56 a.m., he called 911 to report it. A police officer arrived around 1:10 a.m. to inspect the abandoned vehicle, just as Kyle pulled up while on the phone with Lawson. Lawson told Kyle he was right there and saw him arrive, but neither Kyle nor the police officer could see him.

Kyle thought Lawson may be hiding from the officer, so he parked down the road and waited. But even after the officer left, Lawson was nowhere to be found. All Kyle’s calls were now going to Lawson’s voicemail, so he left to take his family home. Kyle returned to the abandoned truck at dawn, but Lawson was still missing.

“The only sign of anyone being in that area was a spot under a tree where it appeared someone sat down close to the roadway within eyesight of where Lawson’s pickup broke down,” a deputy report stated.

The Coke County Sheriff’s Office towed Lawson’s truck at 8 a.m. and noted that Lawson had an outstanding warrant for drug charges and had spent time in jail before, leading them to suspect Kyle of helping his brother vanish. When two polygraphs cleared Kyle, the search for Lawson continued.

Authorities searched the area with thermal imaging cameras, airplanes, and six cadaver dogs but found nothing. Lofton even hired a private investigator who led a team of 10 people. While Kyle said Lawson had told him that Lofton “had people from their neighborhood after him,” everyone involved agreed he had just been paranoid.

Brandon Lawson was officially reported missing on Aug. 13, 2013, the same day that Texas Rangers conducted a helicopter search. Local police had already determined the day prior that he was no longer in the county. His family ultimately created the “Help Find Brandon Lawson” Facebook page to receive tips and coordinate searches of the area where Lawson vanished. 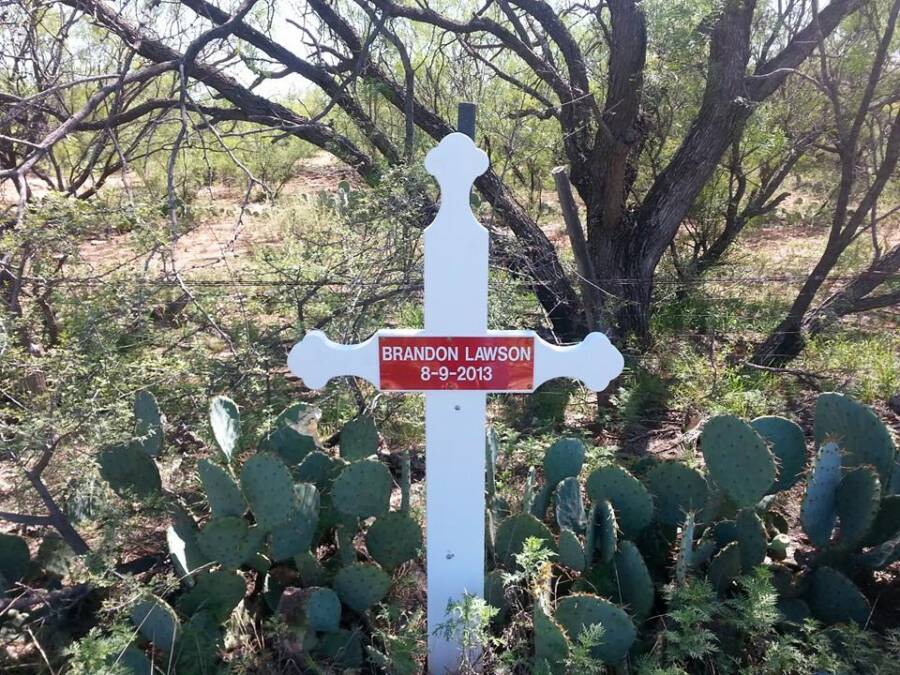 “My brother might have been a felon and might have messed with drugs and he might have relapsed,” said Kyle, “[but…] he loved his children, he took care of his children, he was a good person. He wasn’t some dope fiend living on the streets, robbing people or trying to get over on someone to get high again.”

While police discovered that Lawson had withdrawn from his 401(k) prior to disappearing, he was set to start a new job within days, and his family doesn’t believe that he purposely vanished.

On Feb. 4, 2022, nearly a decade after Lawson went missing, clothing was found that was identified as Lawson’s. A further search led to the discovery of human remains near Lawson’s last known location, according to GoSanAngelo.

“I think when they found the human remains, I feel it’s kind of it,” said Lofton. “I’m more concerned about the kids right now… they still don’t know how to process this. We feel in our hearts it’s him. We feel like, who else could it be? He wouldn’t leave his family. Brandon wasn’t that type of person.”

At the time of this writing, DNA test results to identify the remains as Brandon Lawson’s have yet to be publicly released. Even if the results do match the DNA to Lawson’s, however, there are many questions yet to be answered about the young father’s mysterious disappearance.