A British Paratrooper Just Survived Crashing Through The Roof Of A California Home From 15,000 Feet

The soldier was conducting a training exercise with American paratroopers stationed at Camp Roberts in California when he crashed into the kitchen of an empty house. 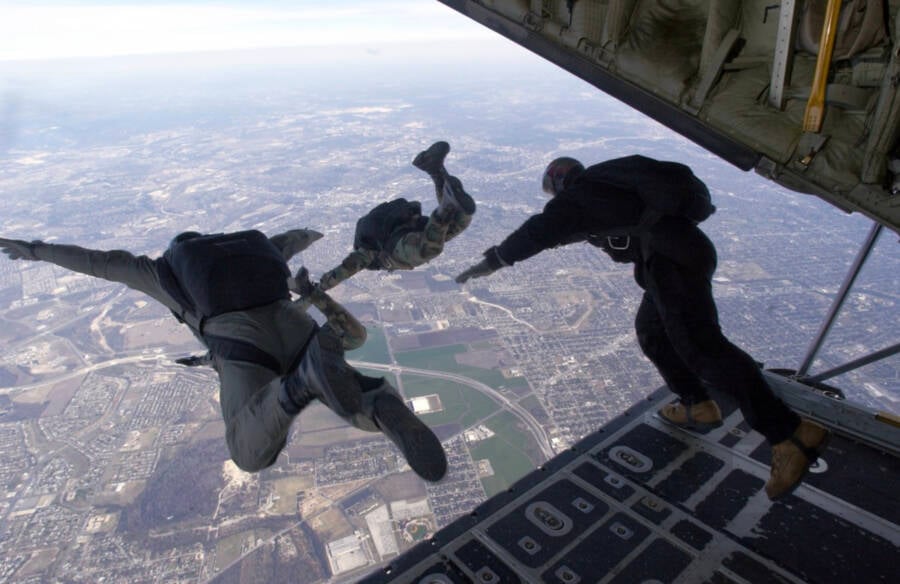 A British paratrooper just survived a fall from 15,000 feet after his parachute failed to open and he crashed through the roof of a house in San Luis Obispo County in California.

It was just another Tuesday in the town of Atascadero in California’s central coast, when a crescendoing crash changed everything. After rushing outside to spot an enormous hole in her neighbor’s roof, Rose Martin ran into the house to find a moderately injured paratrooper in the kitchen.

The incident occurred at around 5:00 p.m. on July 6, as most Americans were winding down and returning to work after a long holiday weekend. According to The Guardian, he survived the free fall after he managed to pull his reserve chute in time to dampen some of the impact. Several neighbors had spotted the flailing figure in the sky before he tore through the roof.

Martin was the first person to arrive at the debris-laden scene. “I ran in to make sure he was okay and I checked one him and his eyes were open but I wasn’t sure if there were any injuries,” she told local news station KSBY.

“I didn’t want anyone to move him. It’s a miracle in my estimation, really. I mean, who lands like that without a parachute and lives?” 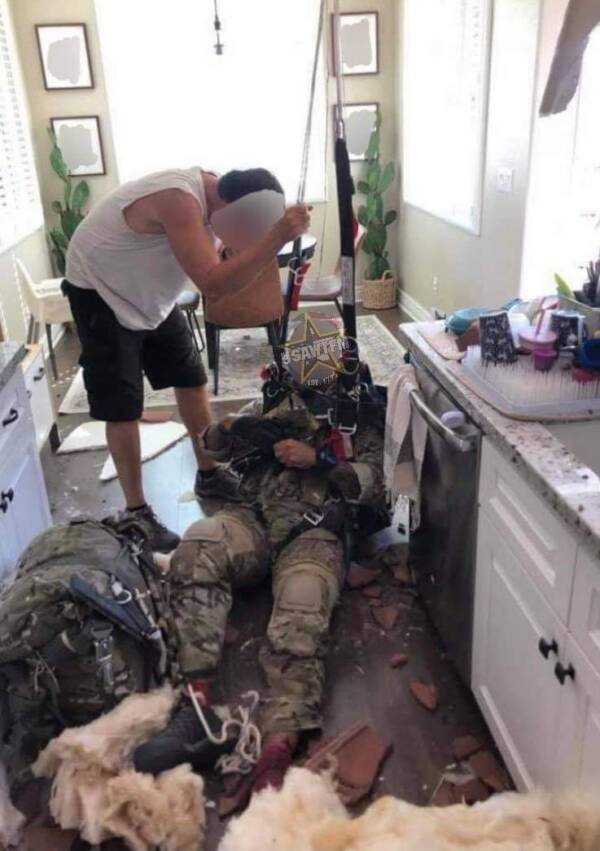 Twitter/TheWTFNationThe unidentified soldier after crashing into the house on Via Cielo in Atascadero, California.

The crash happened on the 9600 block of Via Cielo in San Luis Obispo County, about 30 miles south of Camp Roberts, where the Army was conducting High Altitude Low Opening (HALO) training exercises.

The soldier was rapidly identified as a British Special Air Service (SAS) soldier by his uniform. While the specialized British unit is highly capable of conducting successful HALO jumps, this soldier missed his designated drop zone when the primary parachute failed to open in time.

HALO jumps allow for troops to land covertly in hostile environments without the need of landing an aircraft and were first extensively employed in the Vietnam War. The technique requires paratroopers to open the parachute at altitudes as low as 3,000 feet to limit visible time in the sky as much as possible.

In the decades since its introduction, people have leapt from altitudes as high as 40,000 feet. Regardless of the SAS soldier’s much lower jump, opening the chute at a specific time is essential during HALO jumps in order to arrive at a designated drop zone. With vital seconds gone, he no longer had a choice in where to land. 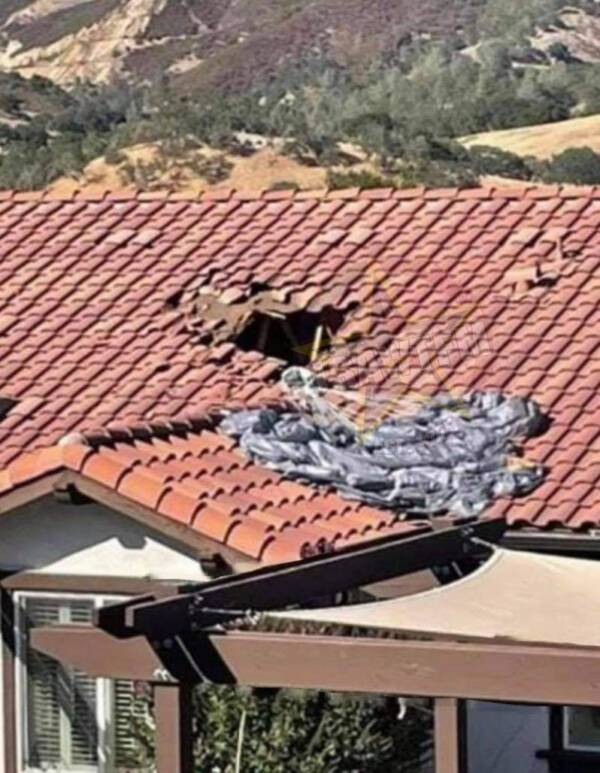 Twitter/TheWTFNationMiraculously, the soldier crashed straight through the attic trusses — but left a sizable hole in the roof.

According to a statement by the Atascadero Police Department, “The parachutist was conscious but stunned with complaints of pain but no visible serious injuries.” The residents of the house were not home at the time and were uninjured.

“There has been a parachuting incident involving a British Soldier training alongside American allies in California,” said the British Ministry of Defense. “The soldier received minor injuries and is recovering well.”

While the incident is certainly astounding, people have survived even deadlier free falls in the past, though such incidents are rare.

The most historic occurred on Jan. 26, 1972, when a bomb in the baggage compartment of JAT Flight 367 exploded in mid-air and saw the plane plummet 33,300 feet. Flight attendant Vesna Vulović miraculously survived. There are also reports of paratroopers in World War II surviving free falls from altitudes higher than 20,000 feet. 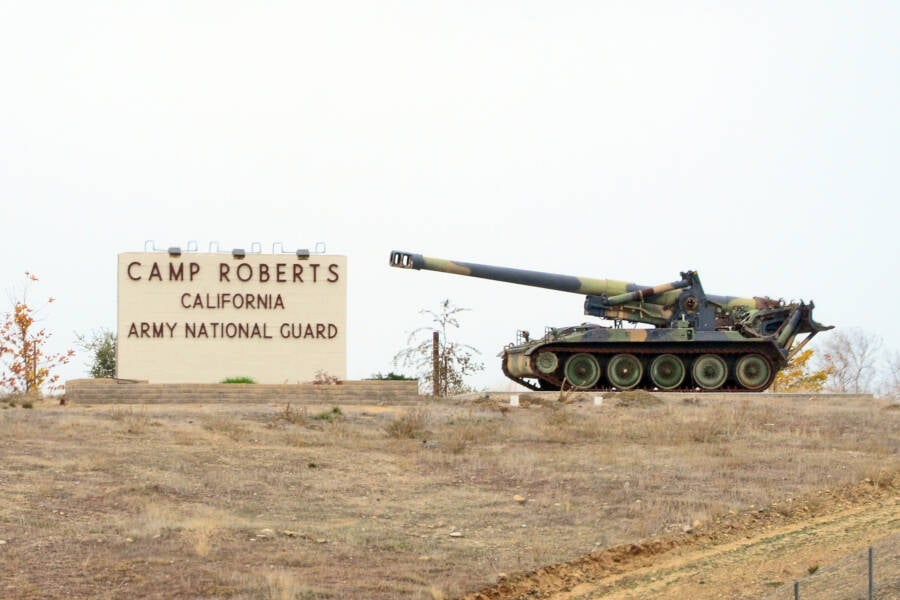 Flickr/Ian AbbottCamp Roberts is 31 miles away from the 9600 block of Via Cielo where the soldier landed.

While the homeowner herself has yet to comment, her mother, Linda Sallady, chronicled just how lucky the parachutist was. After falling through the skies and crashing into a home, the soldier missed any object that could have killed him.

“[He] came through the roof, through the trusses and there’s not that much damage in the house,” she said. “It’s amazing. It’s mostly the ceiling, the sheetrock. He missed the counters, appliances, everything.”

All other members of the training group reportedly touched ground safely in the designated landing field nearby.

After reading about the British paratrooper who survived falling from 15,000 feet, learn about the donated heart that was rescued from a helicopter crash. Then, read about 14-year-old stowaway Keith Sapsford who fell from a plane.